After touring the museum we boarded a boat to cruise through the St. Petersburg canals and across the Neva River to the Peter and Paul Fortress, the initial settlement in the area. On our former visit we had not had the opportunity to take a ride on the canals that have been so integral to the development of St. Petersburg so this was a treat. We had also not visited the fortress that dominates the waterfront. 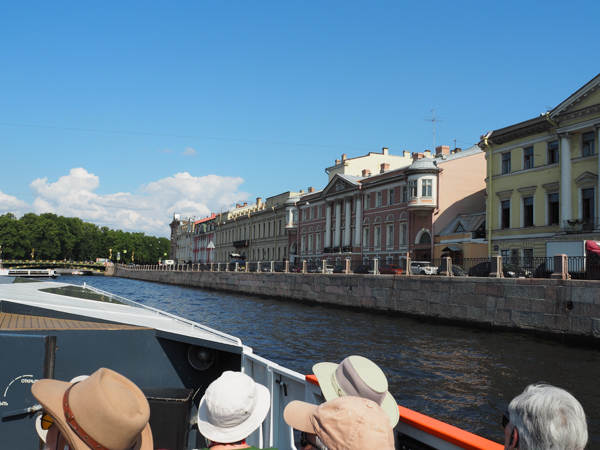 One of our number who is more observant than I asked our guide about the lack of stairs or ladders down to the water in all the canals. Anyone who fell in would not be able to scramble up the steep embankments. The guide was baffled by the question and pointed out the occasional rings that allow boats to tie up. They, however, were too high for someone in the water to reach.

Don't fall into the canals!

Beautiful buildings from the time of Peter & Catherine lined the waterways. Our pre-trip reading had told us, however, that  squalid tenements were situated behind these mansions. Mansions and tenements alike discharged their untreated sewage into the canals, which must have made them less than pleasant. Cholera and other water-bourn diseases were the scourge of St. Petersburg before drinking water was treated. 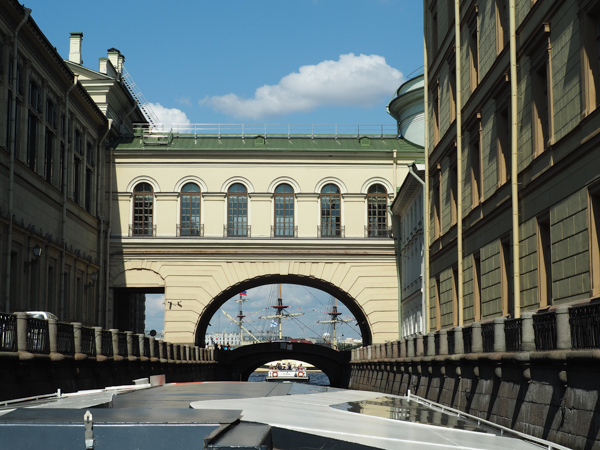 We reached the Neva River by passing between two parts of the Hermitage Museum connected by this walkway.

The low bridge in front of us shows how little clearance there is between the canal boats and the bridges. Our guides frequently warned us against standing (which I did to take pictures). I kept a sharp lookout at least and had to poke some of our fellow travelers who were less attentive. Any standee would have either been decapitated or pushed into the canal. See comment above. 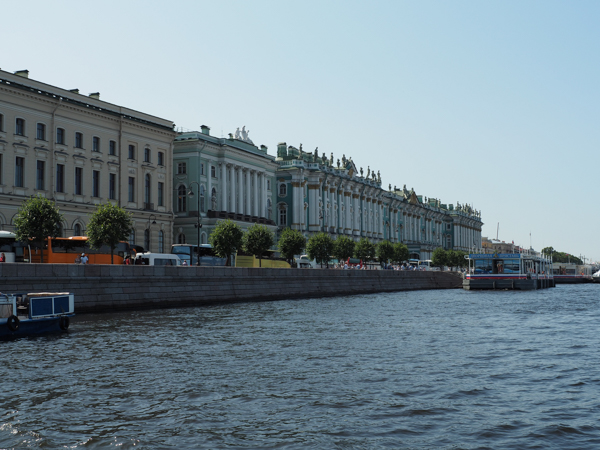 The Winter Palace & Hermitage as seen from the river.

The Peter and Paul Fortress as seen from the river. The towers belong to the cathedral contained therein.

The beach between the fortress and the river is a favorite sun-bathing spot for local citizens. This warm and sunny day brought them out in droves.

Although beautiful, the fortress was much feared in the days of the tsars because it was used as a prison. That did not change much in the time of the Bolsheviks, who raised unjust imprisonment to a high art.

This was the first area of the city that was settled by Peter. It was located on an island called Hare Island. There were numerous hare sculptures tucked here and there in surprising places. 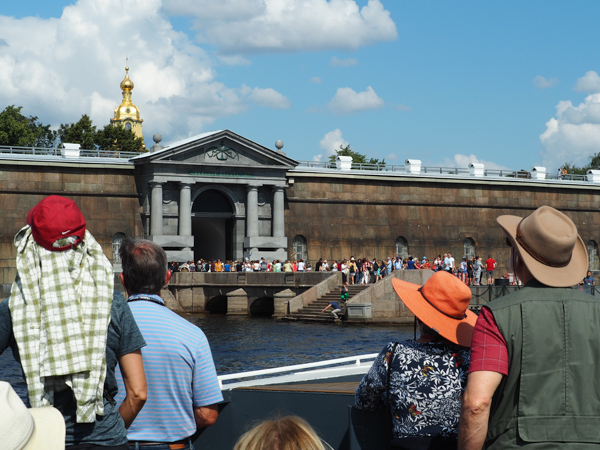 Throughout St. Petersburg's history the river and canals were major forms of transportation. The river is still crowded -- now mostly with tourist boats. At the time of our visit the city was preparing for a major naval celebration, so there were numerous naval vessels of all eras anchored here and there -- including submarines. 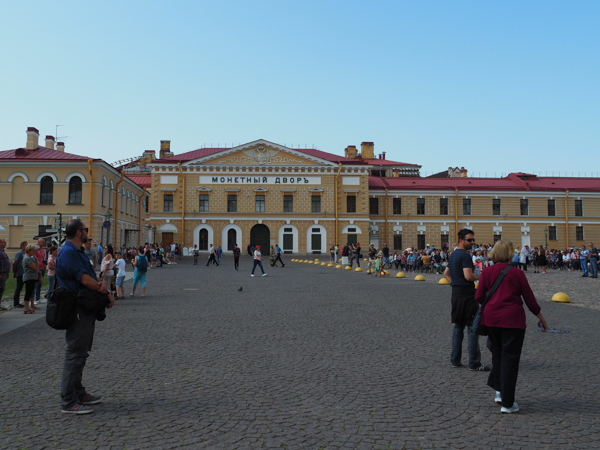 The St. Petersburg Mint contained within the fortress has been in operation since 1724. The central part of the current building was completed in 1805 and enlarged in the mid-19th century. It is still in operation.

The large plaza was crowded with groups awaiting the noon opening of the cathedral. 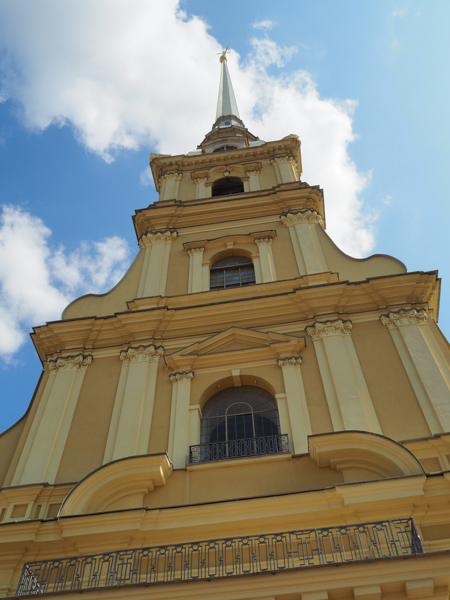 The cathedral tower goes up and up.

Its bells ring to mark noon, but a daily howitzer firing is the official time-signal. We about jumped to the top of the spire even though our guides had warned us.

It signaled a stampede into the building! 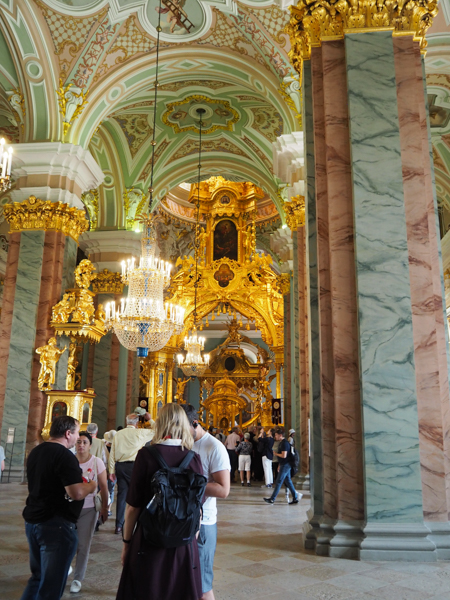 Dominico Trezzini, the architect who designed the Peter and Paul Cathedral, was not familiar with Russian traditions so he included a pulpit, not typical of Russian Orthodox churches, and an iconostasis that looks more like a Catholic altarpiece than the stylized flat screen otherwise seen.

The marbling throughout is done with paint. 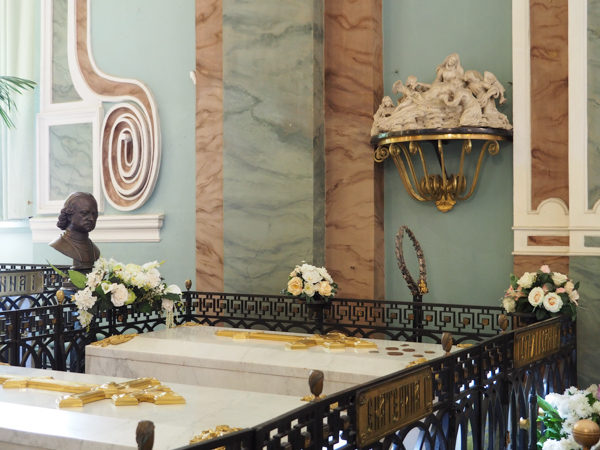 The cathedral is fabulous, but my goal was Peter the Great's tomb. When we visited Russia five years ago, much of our reading was focused on him and both Jim and I were captivated.

Most of the Romanov tsars and their families are buried here, including Nicholas II. 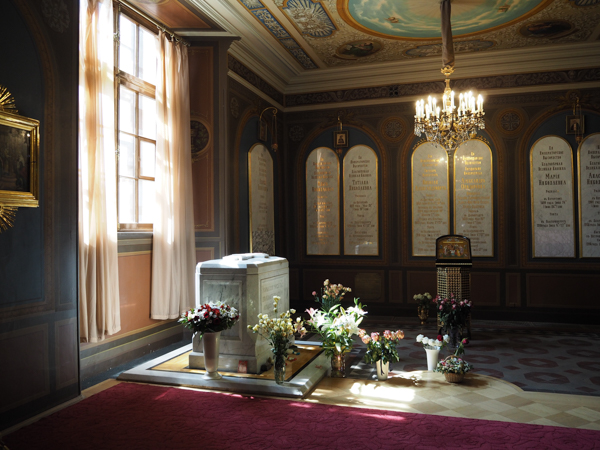 The remains of the last tsar and most of his his family were relocated here in 1998, but have been denied full church burial rites. Two of the children were found buried separately from the rest of the family and their bones have still not been reburied.

The tombs are not located in the church proper -- they are in a side chapel.