The list of things that I didn't know about Estonia would about fill the Baltic Sea! For one example, the language is closely related to Finnish.

We started our day with a lecture from Professor Posen: NATO Enlargement in Eastern Europe. These are MUCH abbreviated notes.

The original intent behind NATO was to defend a devastated Europe until it was strong enough to defend itself. Deterrence worked well, but there has been mission creep. Europe did become strong, but US policy has discouraged an independent European Defense Organization. NATO central command suggests a percentage (~3%) of GDP devoted to military preparedness, but not all countries meet that commitment and some have let their military preparedness decline.

In the 1970's and 80's the Soviets acknowledged that their economy was failing. This drove the process of perestroika (economic restructuring) and glastnost (openness). Increased openness led the satellite states to rebel. Unrest came to a head in 1991 during the failed coup against Gorbachev. This precipitated the end of the Soviet Union.

Russian military power is perhaps 10% of the Soviet Union's military power. The concentration of military personnel and materiel in the satellite states had nowhere to go after the break-up. Tanks, aircraft, and munitions were either abandoned or returned to Russia and stockpiled. Soldiers were demobilized and either stayed where they were or returned to Russia to swell the ranks of the unemployed. Putin has a weak hand, but he plays it ruthlessly.

After the dissolution of the Soviet Union, many former Warsaw Pact members joined NATO. We may or may not have told Russia that NATO would not enlarge, but in any event, no one wrote it down. Russia feels threatened by this activity.

Professor Posen mentioned the Partnership for Peace initiative within NATO as an alternative. Based on what I have found since the trip, it is intended either to make NATO membership unnecessary or to prepare member nations for full membership. Opinions differ. Most of the former Soviet republics, including Russia, are members.

NATO expansion has been controversial. (In fact, Professors Posen and Weiner don't even see eye-to-eye on it.) As long as Russia remains weak it is not an issue, but a resurgent Russia looking to expand its buffer zone becomes a danger as can be seen in the Ukraine today. The Baltic states in particular are at risk. Article 5 of NATO states that an attack on one ally is an attack on all. But if one of the Baltic states is attacked, is it defensible? There is a symbolic presence in the area, but it could not withstand a Russian attack. 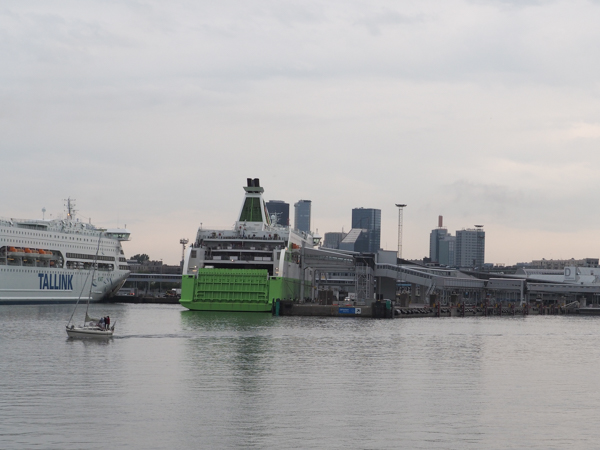 Tallinn was an example of a place that was overrun by cruise ships. There were at least four large ships there on the same day including Silver Spirit (500+ passengers), Seabourn Ovation (600+ passengers),  Mein Schiff 4 (2,700+ passengers) & AIDA Prima (3,000+ passengers). This in addition to the large ferries that came and went throughout the day. That's 7,000+ passengers, give or take. EVERYTHING was crowded!

We crossed paths with the Tallink Ferries at several places. As we cruised toward the harbor in Tallinn, one blew past us like we were standing still. The ships are large. I recall someone saying that they could hold 500+ passengers and 50+ cars, but I've not been able to verify that.

Their berths had jet way equivalents that enable them to transfer passengers very quickly. 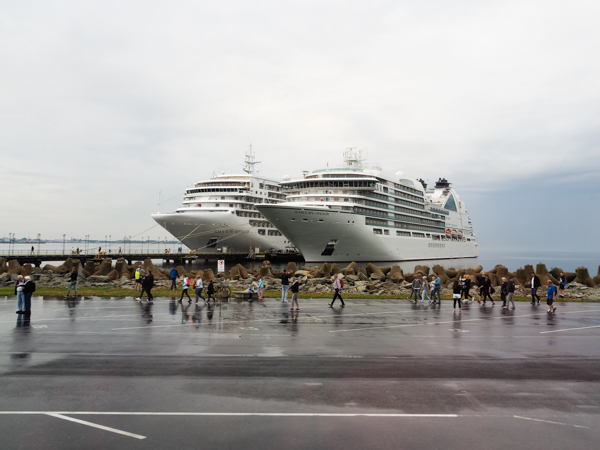 Two of the smaller cruise ships. The crowds of people are walking from the much larger ships berthed farther out the pier. 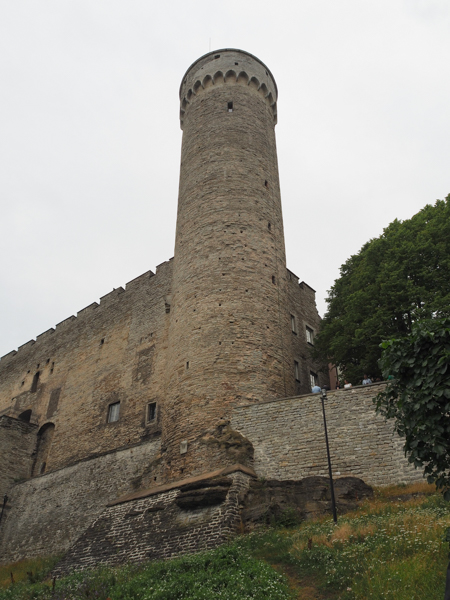 Tallinn is divided into two towns: the upper town and the lower town.

We started in the upper town at the foot of Toompea Castle, which now houses the Estonia parliament. The tower is called Tall Hermann. I'm sure the guide explained why the odd name, but I no longer remember the reason.

After a time getting an overview of the history of Estonia in general and Tallinn in particular, we walked along a road to the right of the walls into the Parliament Square.

Along the way we passed the Monument to Estonian Independence. It is a simple monument: a large irregular boulder with the inscribed date: 20 August 1991. Estonia celebrates this day as Independence Day. Our guide told us that the boulder was one of many used to prevent Soviet tanks from reaching the seat of government. 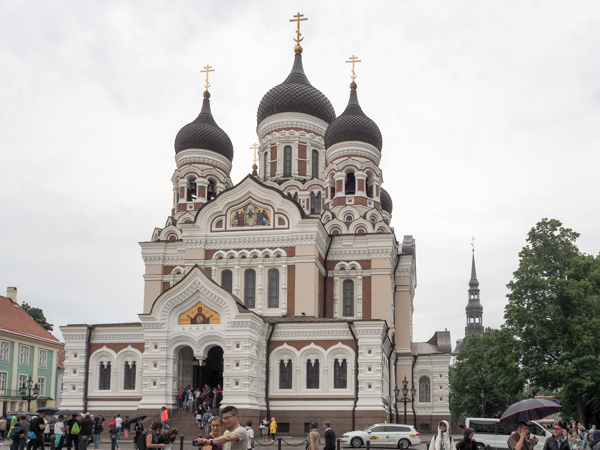 The Parliament Building was too large to get a decent picture, but across the square was the Alexander Nevsky Cathedral. It was constructed during the time of Russian domination of Estonia and hasn't always been a popular symbol. There have been intermittent talks about demolishing it. 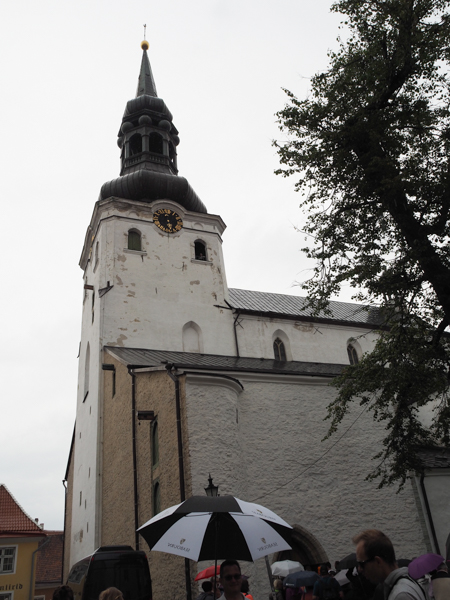 We visited St. Mary's Cathedral, dating from the 13th century. As in any building in continuous use for so many years, it has been much altered. Although it started life as Roman Catholic, it is currently Lutheran. 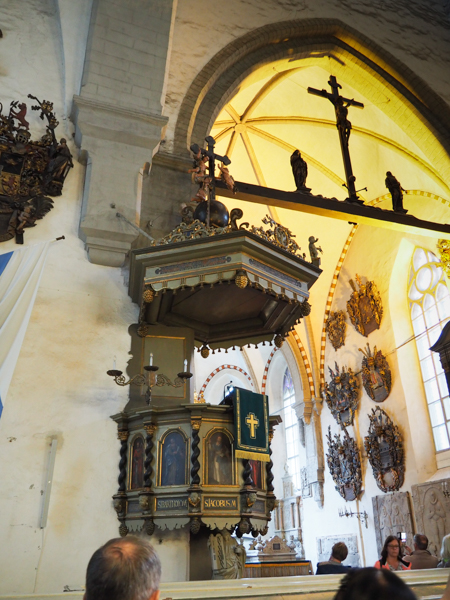 Large crests decorated walls throughout the church. They commemorate prominent families who supported the church through the ages. Our guide said that the size of the crests and the amount of gold leaf indicated the generosity of the donors. 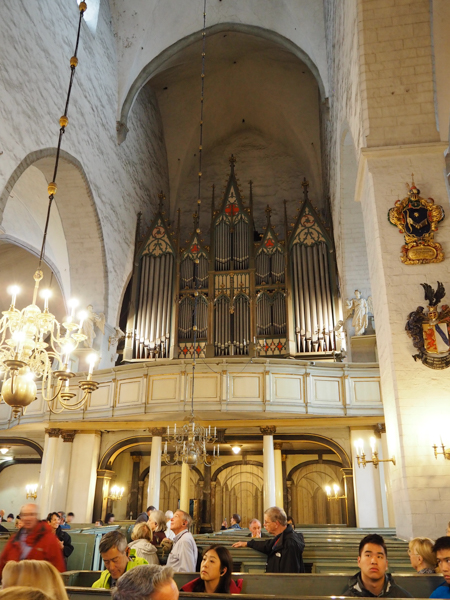 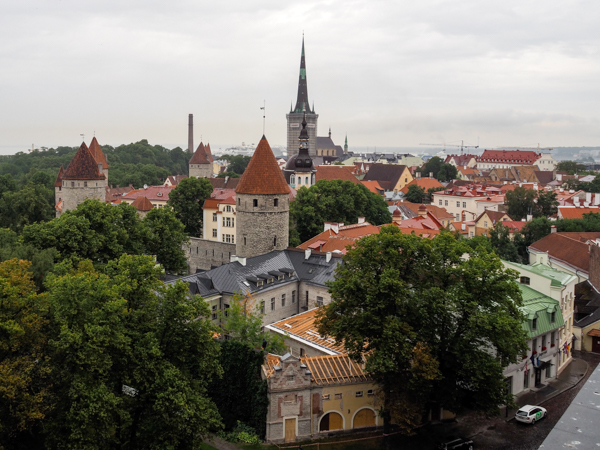 This overlook shows the elevation difference between the upper and lower city. The upper city is older and was the location of the Estonian nobility. The lower city was the home of the Hanseatic merchants. 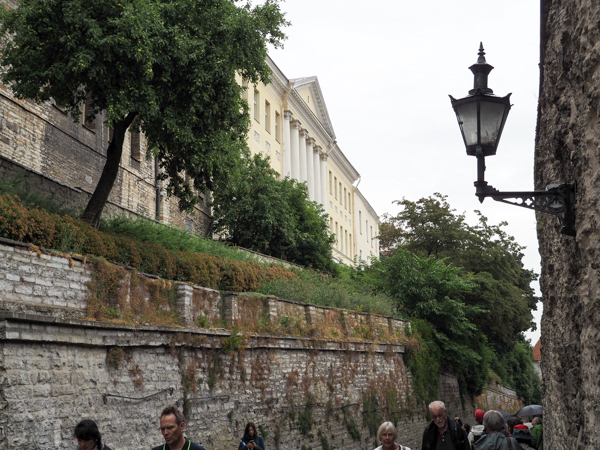 The Estonians and the merchants did not trust each other. There were only two streets that led between the lower and upper towns. They each had gates that were locked and guarded at night. 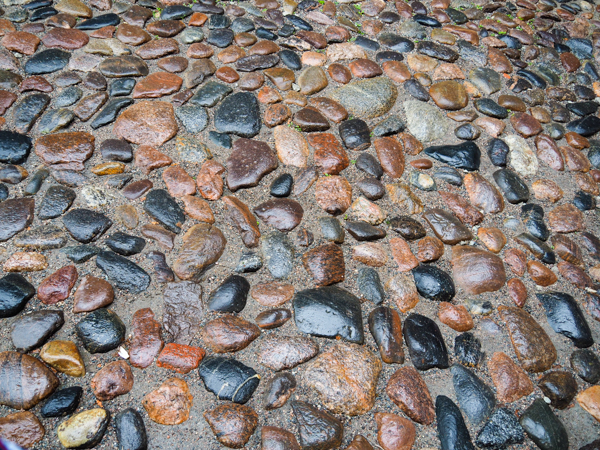 All of the streets and a few of the side walks were paved with rough cobblestones. We were admonished by our tour staff before each excursion to wear sturdy shoes. It would have been very easy to turn an ankle.

We faced intermittent showers throughout the day in Tallinn, but it was the only rainy day on our trip. 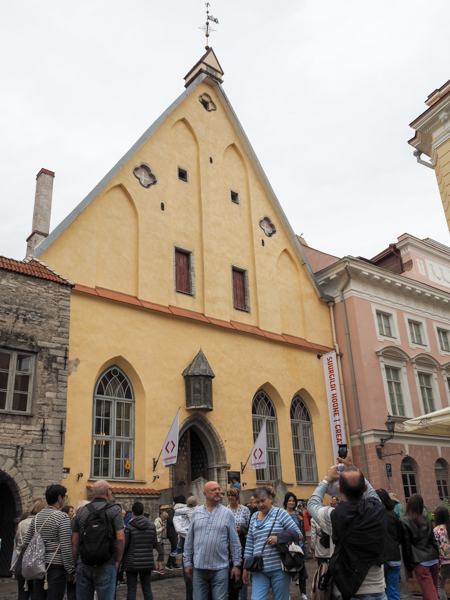 Tallinn also had a Great Guild Hall, although we didn't see any angry cats in the vicinity. The building dates from the early 15th century. The guild was active into the 20th century. It is now a museum.

Our guide said it was a popular place for weddings, but there was no space nearby for the couple to spend their wedding night until the grey stone addition was constructed on the left of the hall and fitted out as a luxurious bedroom. 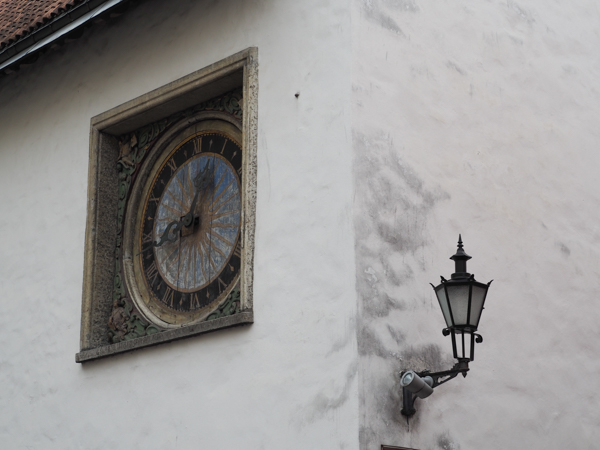 The Church of the Holy Spirit is one of the oldest churches in Tallinn, dating at least since the 14th century. The 17th century clock is attributed to Christian Ackermann. 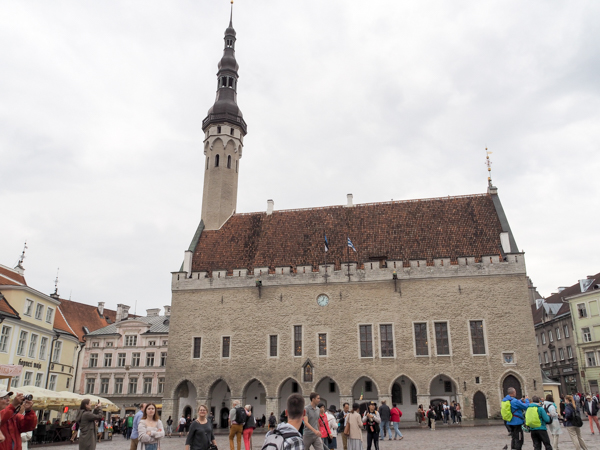 The Tallinn Town Hall dominates Town Hall Square. It is the oldest surviving town hall in the Baltic area. Tallinn has the distinction of never having been destroyed by war. 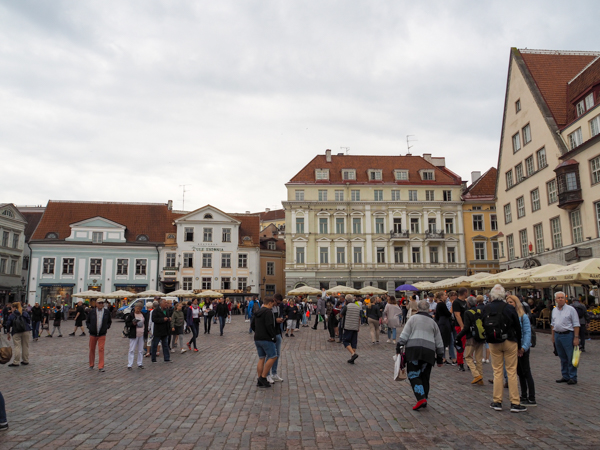 The Town Hall Square shows the crowds of tourists visiting the day we were there -- mostly from cruise ships much larger than ours. 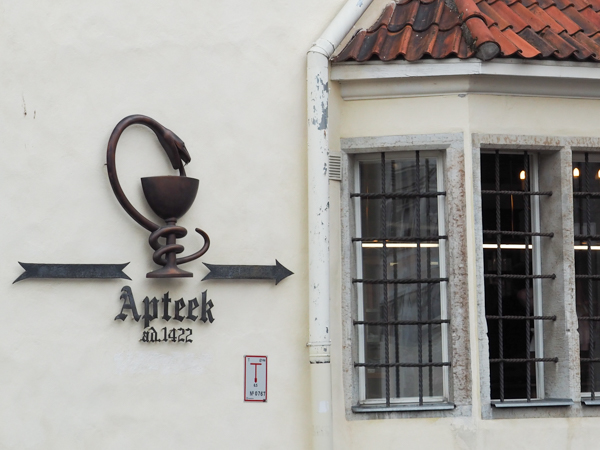 The oldest pharmacy in Europe operates in a building opposite the town hall. It has been in business in the same location since at least 1422. That's where you could pick up your "eye of newt" back in the day. From 1580 or so until 1911 it was run by the same family. 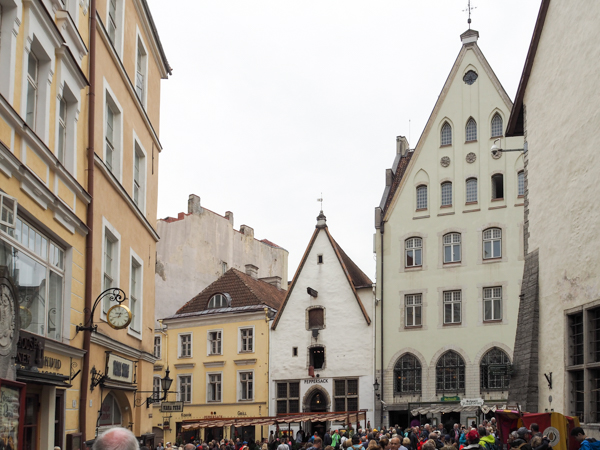 Many of the Hanseatic warehouses still exist.

The center building has a crane used to haul loads into the upstairs storage. Until a few years ago, it had stairs that led from the arched door down to the street. They had to be removed due to increased traffic in the city center. 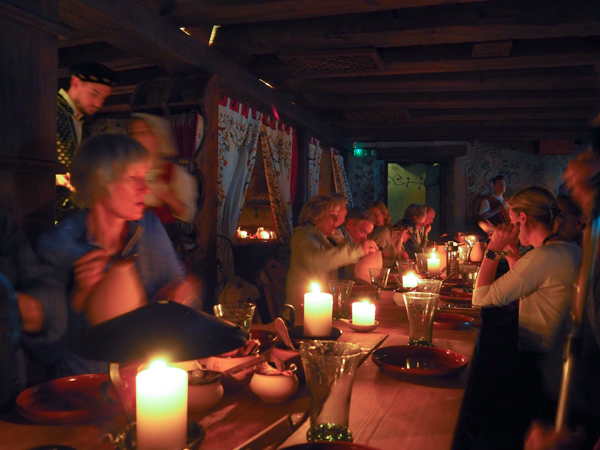 We had lunch at Olde Hansa, a medieval-style restaurant near the square above.

It was very dark and we were located up four flights of dark and creaky stairs. The food was good, but it wasn't possible to see what you were eating. The only things I recognized were dried meat, olives, and pickles. I did catch the name of one dish: spelt. It was my favorite.

Had there been a fire, we would have all perished!

Jim had the wine and I had the house-made herbed beer. It was ... unusual.

While there we had a talk by Marko Mihkelson a member of the Estonian Parliament. He was an impressive speaker and our guide later said he was a good representative, which he attributed in part to his having been a journalist.

Speaking of which there are current concerns about freedom of the press in Estonia. 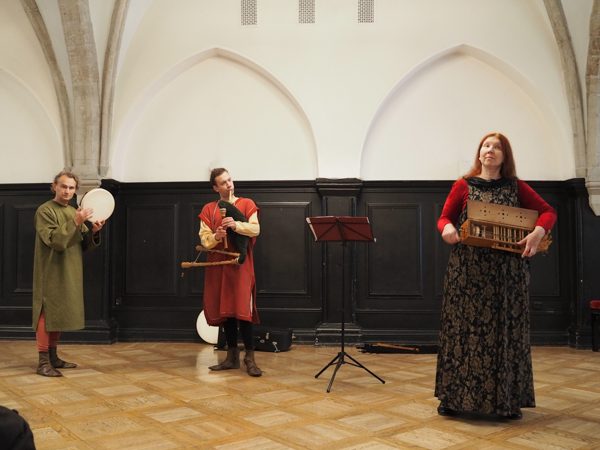 After lunch we gathered at the House of the Blackheads for a concert of medieval music. The Blackheads were a fraternal order based primarily in the Baltic Region. It was something like a Jaycees version of the Great Guild with militaristic overtones.

The group, Rondellus, that played for us was terrific. They all have day jobs as music professors. Our group bought all of the CDs that they had with them. I got there just as the last one was sold. I must have looked devastated, because they found a spare and got one of the guides to come find me on the bus. Wow.

One of their CDs is (are you sitting down?) a cover of a Black Sabbath album done in the medieval style with the lyrics translated into Latin. Awesome! Check out this cut on YouTube.

The piper was able to sing and accompany himself on the pipes. That takes black magic, for sure. 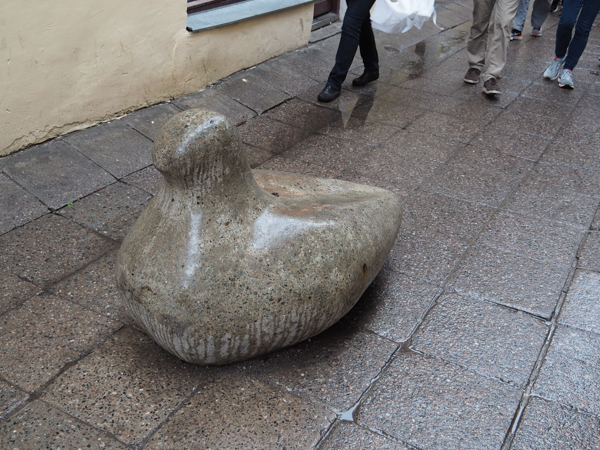 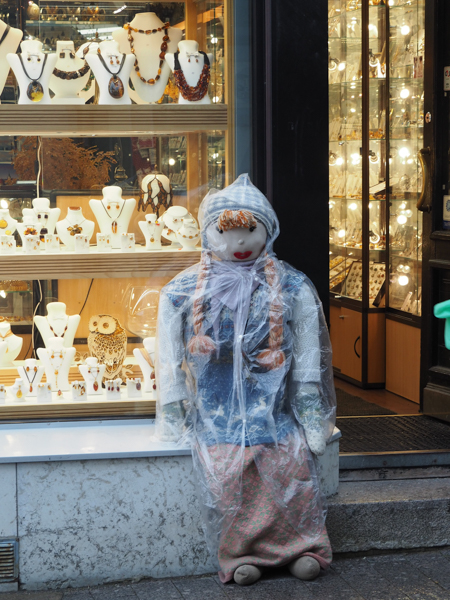 This amber shop had a mascot dressed for the weather. 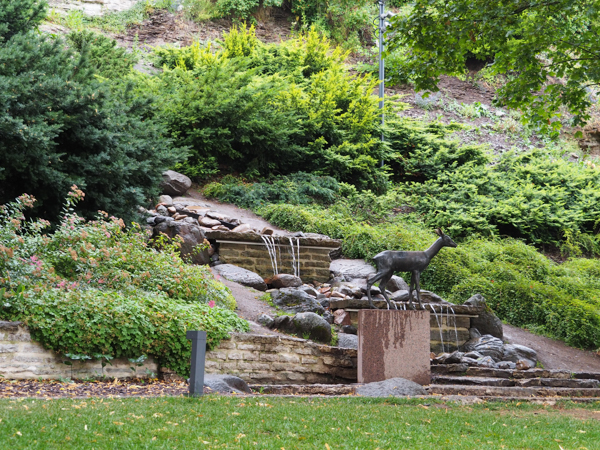 The walk back to the bus passed this garden located at the foot of the escarpment separating the upper and lower cities. 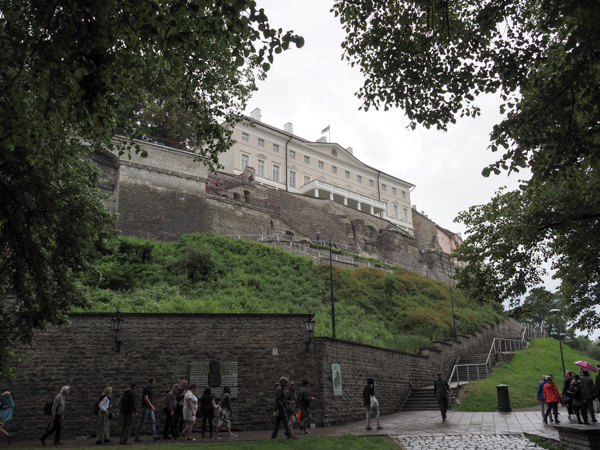 Looking up toward the upper city. 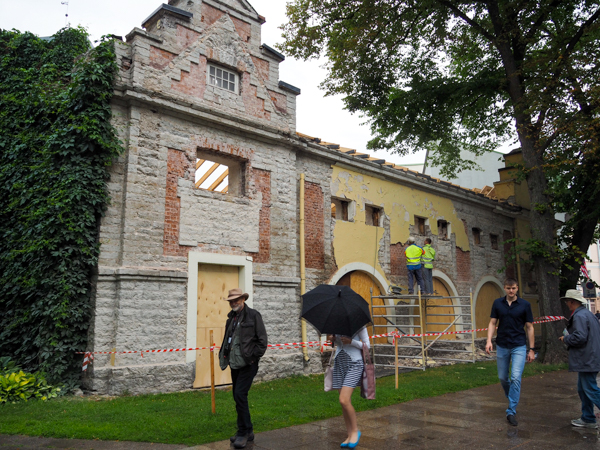 Also on the way back to the bus we passed these workers freeing an elaborate masonry facade from a bland stucco cover.

I've also added Tallinn to the list of places I'd like to visit again, but not in high tourist season! It is worth more time.