Before we arrived in Gotland, we were treated to a lecture by our other study leader: Barry Posen of MIT. His topic this morning was "National Security Strategies in light of WWII and the Cold War" specifically related to Finland, Sweden & Norway.

There were two excursions offered on Gotland: a walking tour of Visby and an excursion into the countryside. We chose the latter, but in retrospect recommend staying in Visby, an exceptionally well-preserved Hanseatic City. 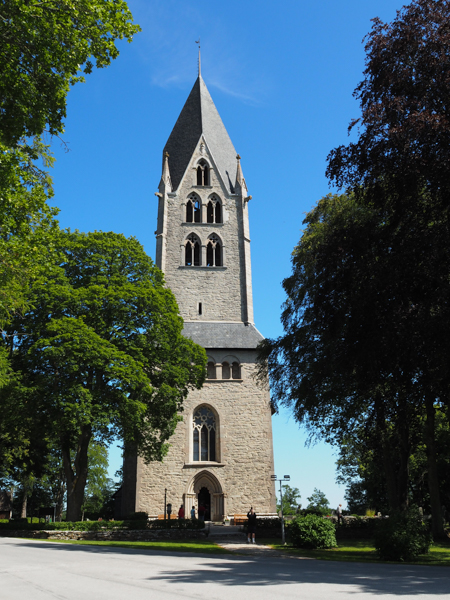 Our first destination was Dalhem Church. The church was built in the 13-14th centuries and remained relatively intact until a heavy-handed restoration in the late 19th century. 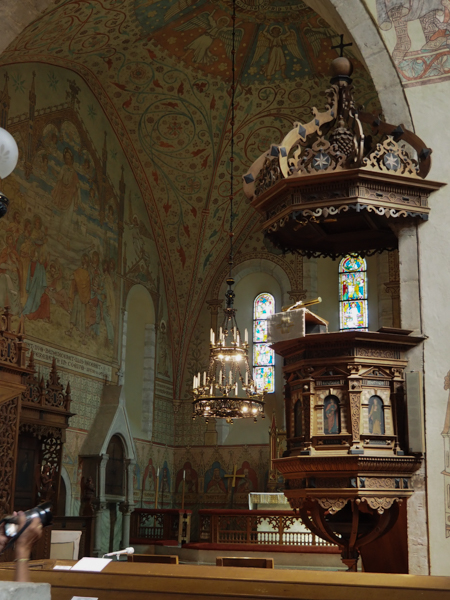 The pulpit was added when the congregation converted from Catholic to Lutheran in the 17th century. Our guide highlighted the location of the pulpit on the right side of the church. He said that in Swedish Lutheran churches the pulpit is located on the left, but in Danish churches it is located on the right. I've not been able to find any verification of this since our trip, but it is true that all of the other churches we visited on this trip had the pulpit on the left.

The frescos throughout the church are almost all from the 19th century restoration.

The exception is this fresco, which does date from the 13th century. It was covered by whitewash when the church was initially converted to Lutheran and that preserved it. During the most recent restoration the whitewash was removed to uncover the ancient art. 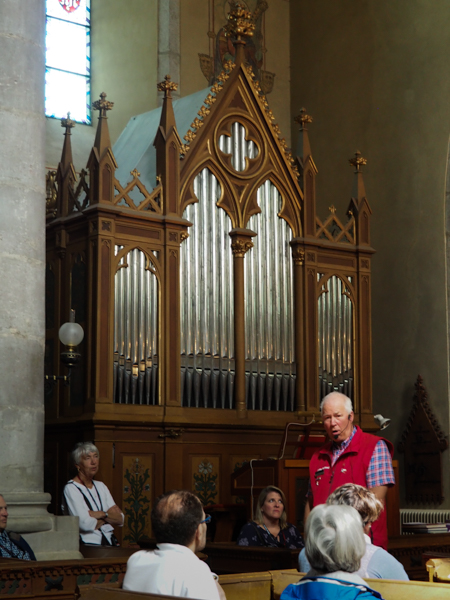 Our guide's singing was the high point of our tour of Gotland. He had a magnificent voice and the acoustics of the church were just right. He sang three folksongs for us and we were rapt. 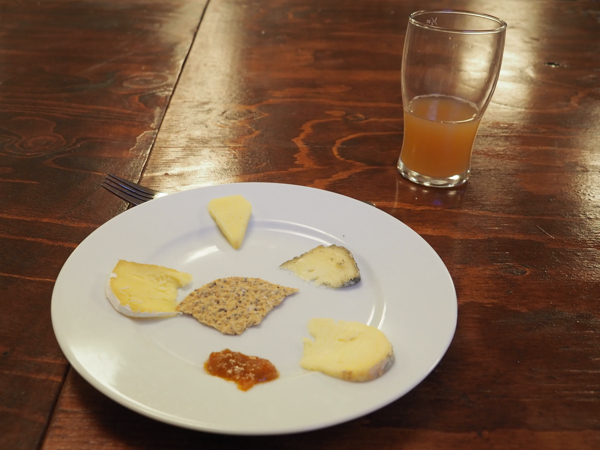 Stafva Farm was our next stop where we were to sample locally produced cheeses. Jim & I had eagerly anticipated discovering some new cheeses and learning about their production.

Imagine our disappointment when the cheese presentation was headed by a young Belgian who didn't know much about cheese and cared less. His focus was artisanal coffee! He delivered what was obviously a memorized script and was unable to answer any questions.

The cheeses weren't even that interesting. The best part of the tasting was the jam and I've forgotten what it was.

Afterwards we had some time to (preferably) spend in the gift shop or wander around the farm buildings. I chose the latter. 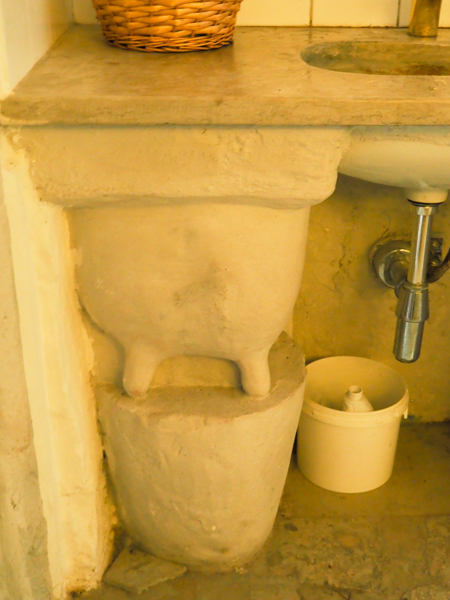 The best part of the visit was the pedastal for the sink in the restroom. It has the shape of a cow's udder and milk bucket.

Based on the info at the link, the farm is fully automated. It wasn't possible to see into the cow barn because it was very dark and the entry door was blocked. The cattle inside were very noisy when hearing anyone walk by. I doubt they were contented. Depressing!

The sheep looked happier -- at least they were outside. According to the web info the Stavfa cheeses are made from cow's milk rather than sheep's. The farm, however, was home to several diverse small industries, so perhaps the sheep were used by someone else for something else.

There were a number of items around the farm with a cow-head motif, but this was the only remnant of an actual cow.

I can't find a reference to any native Gotland cattle breeds. 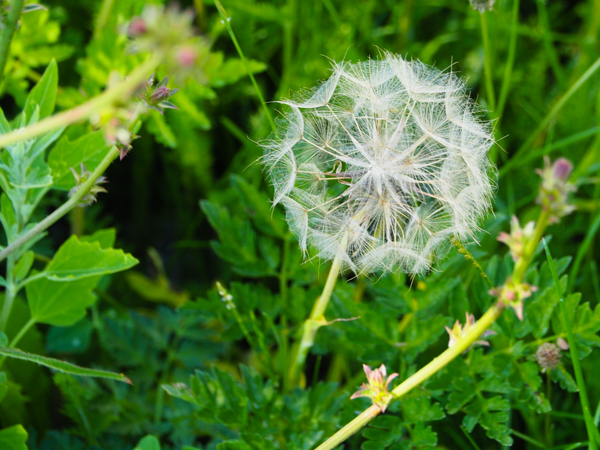 The most striking thing at the farm was this beautifully symmetrical seed head alongside the roadside. It was far too large to be a dandelion. 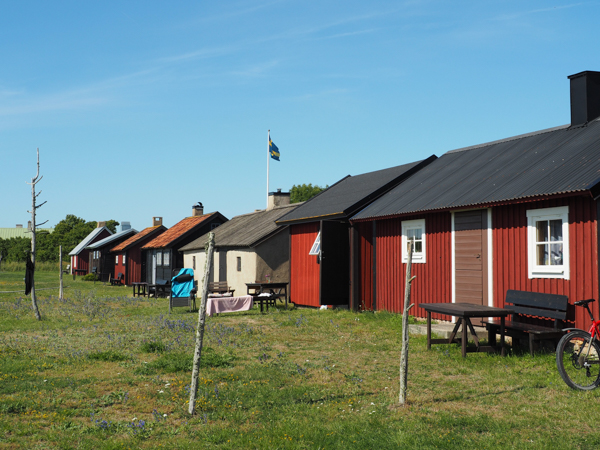 The next stop was the "picturesque old fishing village of Gnisvärd."

Our guide told us that in its heyday, the "village" was used seasonally by the local farmers. When they weren't working their fields, they went fishing. It was never a permanent settlement -- at least in modern times.

Nowadays families purchase the rights to use a cabin, but they cannot live in them. It wasn't clear if they even had authorization to stay overnight, but our guide said that many did. There were certainly a number of folks hanging around here & there with grills and lawn chairs. The cabins lack bathroom facilities so there is a washhouse adjacent to the harbor. 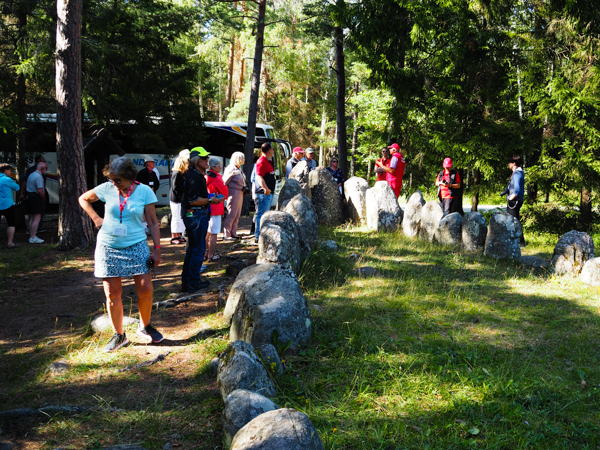 Not far from the village we visited a stone ship. It was quite large -- this is only the "prow." There is detailed information at the link, but to summarize, such constructions are found throughout the Baltic area.

One of the myths about Vikings that Amir debunked was that they buried their dead in flaming ships at sea. Ships were valuable. It is much more likely that stone ships such as these were "stand-ins" for actual ships. 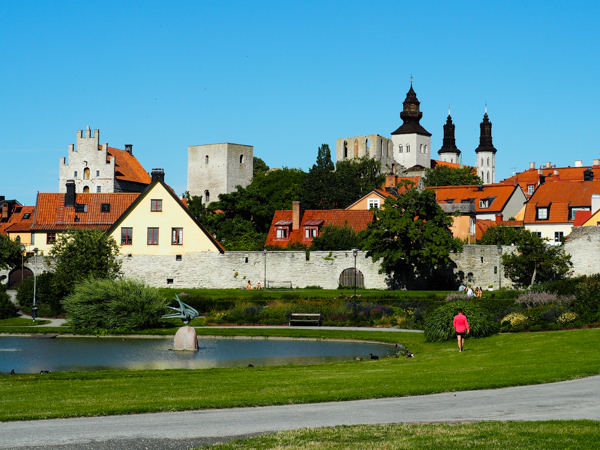 After returning from our excursion through the countryside, our bus dropped those of us who were interested back at Visby for a short time on our own. I took advantage of that option although there wasn't time to explore inside the city. This is the view from what would have been the harbor in medieval years. The modern harbor is several blocks away.

Land in Scandinavia has been rising from the sea since the end of the last ice age. The weight of the ice depressed the land and it is still rebounding in this area. 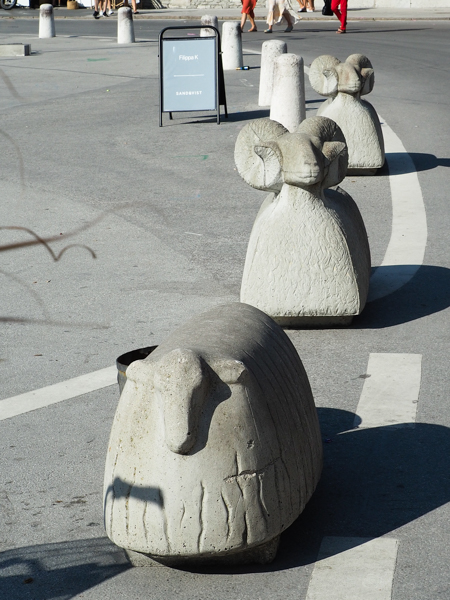 I mentioned that it wasn't just Stockholm that had concrete barriers in the shape of animals. Instead of lions, Visby has sheep!