The following day's activities began with a lecture by Stanford's study leader Amir Weiner. He joked that he had one hour to cover roughly 1000 years of history in the Baltic region! At 10AM! With jet-lagged students! And with a heavy Israeli accent! For once I took notes, and it was worth it. The high points:

After the lecture we boarded a bus to Drottningholm Palace. Drottning is Swedish for Queen and the palace was commissioned in 1576 as a gift for queen Katarina Jagellonica. 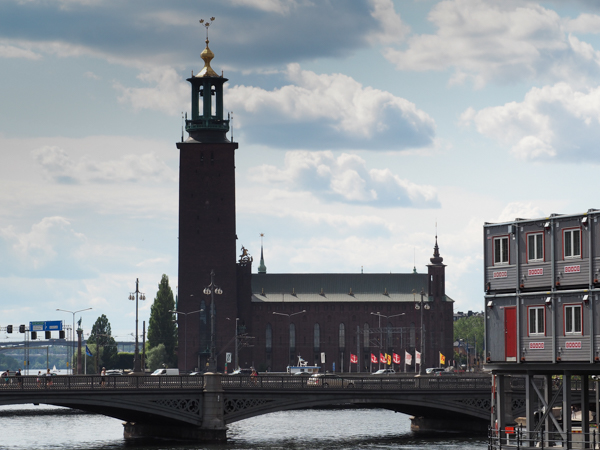 The Stockholm City Hall is not just the seat of the city government, it is the location of the Nobel Prize Banquet. I was not previously aware that the Peace Prize recipient, however, is selected in Norway and awarded in Oslo rather than Stockholm.

We did not visit the city hall on our excursion. 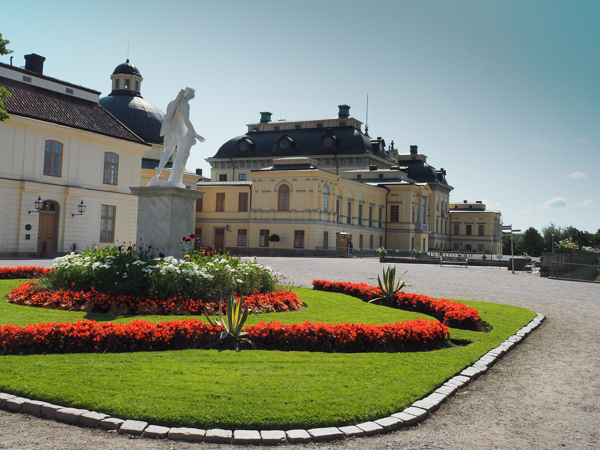 Drottningholm Palace is the primary residence of the Swedish royal family, but the the grounds and state rooms are open to the public even when the king & queen are in residence.

Swedish law states that the succession passes to the oldest child regardless of gender. The next in line for the throne at present is Crown Princess Victoria, even though she has a younger brother. The monarchy is a ceremonial position and is popular within Sweden.

The palace was constructed in the late 17th century to replace an earlier structure that burned. During most of the 19th century it was disused. In the early 20th century the government restored it to its 18th century appearance, albeit with modern conveniences such as electricity and indoor plumbing.. 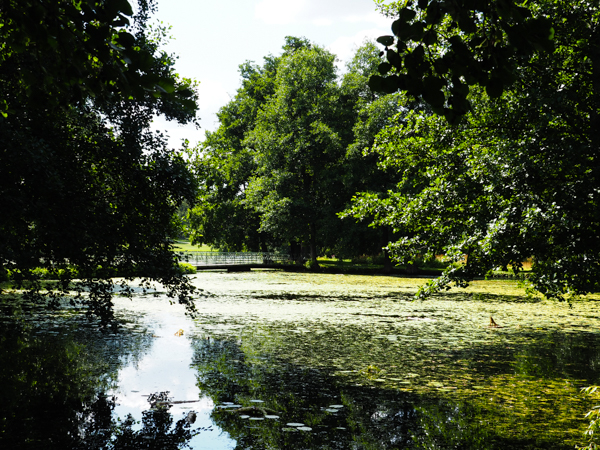 The English garden dates from the late 18th century. 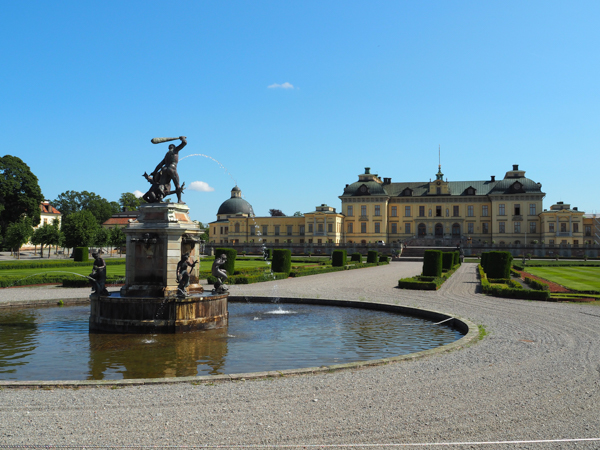 The architects of the palace laid out the formal Baroque garden in the 17th century. It fell into neglect, but was restored in the mid-20th century. Most of this garden had restricted access. A groundskeeper was raking the pathways "just so" without having to worry about a horde of tourists trampling his handiwork. 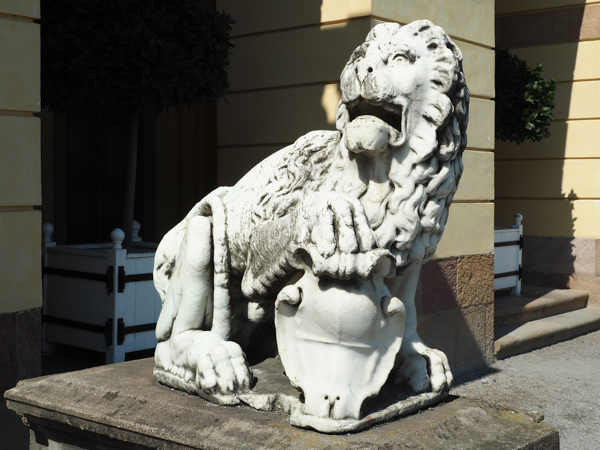 By this time I had become fascinated with the lion images.

The palace's grand staircase is painted wood. The Swedes have a tradition of frugality so we saw many instances of creative opulence using materials such as wood and papier-mâché. The man-made result is highly prized. Anybody with enough money can import marble -- artistic skill is needed to produce a convincing replacement.

The statue in the niche is Queen Christina depicted as the goddess Minerva. Her nickname was "Minerva of the North." We first became interested in this remarkable woman when we saw Greta Garbo in the movie Queen Christina. Although the movie is not factual, it does capture some of her spirit. In this case fact is more vivid than fiction. 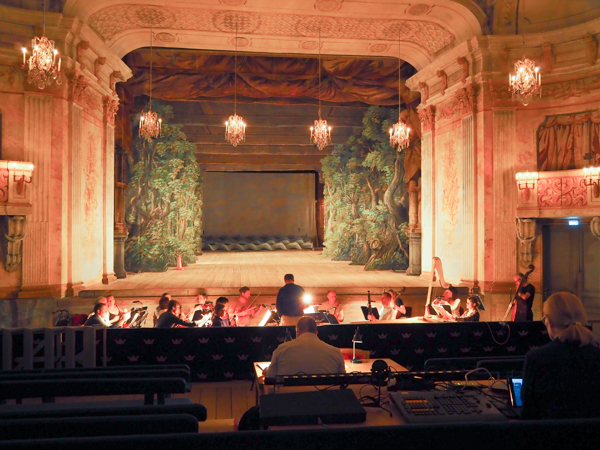 A primary attraction is the palace theatre. The building dates from the mid-18th century. Many innovative cost-saving techniques were used in its construction. The theatre fell into disuse at the end of the 18th century so its workings were never "improved." It is now one of the few complete Baroque theatres with original stage machinery -- still in use.

We listened to the orchestra rehearse. They use Baroque instruments to keep with the theme of the space. Having some (very) limited orchestral experience myself, I was interested that the conductor worked with the musicians on interpretation rather than dictating his own ideas.

The theatre maintains an active performance schedule and tickets may be purchased at the gift shop. 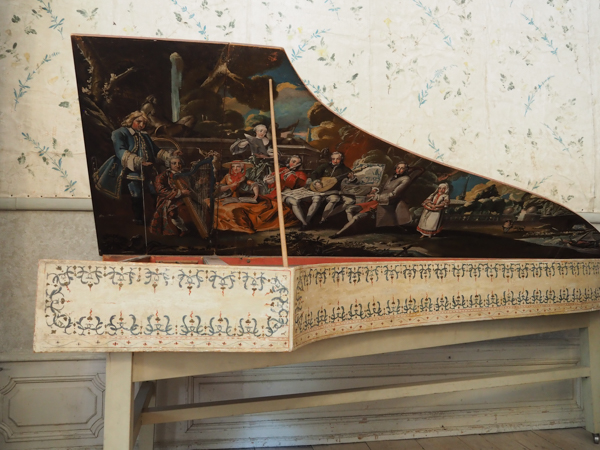 There were numerous exhibits on display throughout the theatre including 18th century clothing and this harpsichord. I forgot to ask if it was original or a reproduction. The various articles of clothing were reproductions.

After our tour we had lunch at a cafe on the palace grounds and then had time to wander around a bit before leaving. 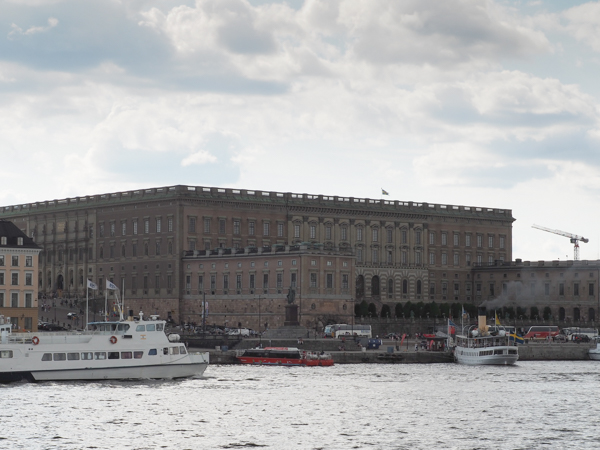 On our return to Stockholm, we passed the Royal Palace -- quite a pied-à-terre for the royal family. 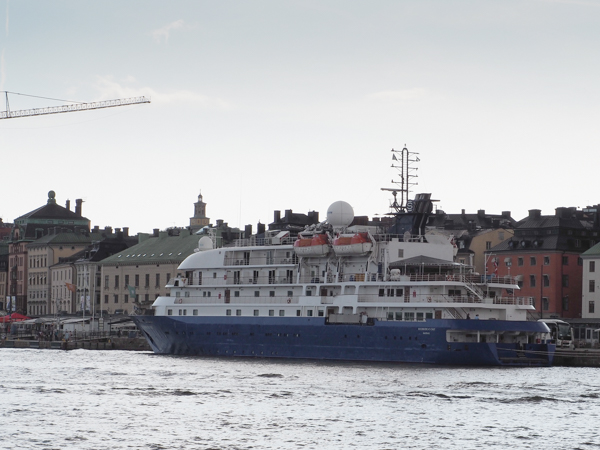 Since our ship, the Hebridean Sky, is much smaller than the mega cruise ships, she can dock close to downtown. That added to the convenience at all our ports of call.

One thing that didn't add to the convenience of our embarking on the ship here was a sudden downpour that blew in just as we made the transfer from the buses to the ship. It wouldn't have been so much a problem if this wasn't the initial embarkation, which required passport reviews, document checks, X-rays of hand-bags, etc. The officials set up small tents to keep the equipment dry and the ship's staff brought out umbrellas, but no one made it onboard without getting at least a bit damp -- if not soaked!

The ship is our old friend the Corinthian II although she has gone through several names and ownerships since we took her across the South Atlantic in 2010. The Baltic Sea was calm to the point of glassiness for our excursion, but we assured our fellow travelers that this ship could take a lickin' and keep on tickin' if the need arose. 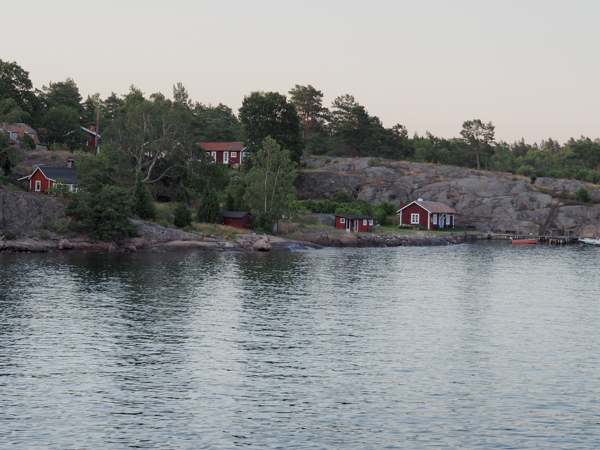 We spent the evening cruising through the Stockholm archipelago. The many islands often had summer homes nestled here and there. One of our guides said that every Swede's dream is to have a country home with red siding and white trim on a nearby island.

To be best appreciated, all of these maritime nations and provinces should be visited by ship. Driving in from the airport just doesn't supply the same perspective. 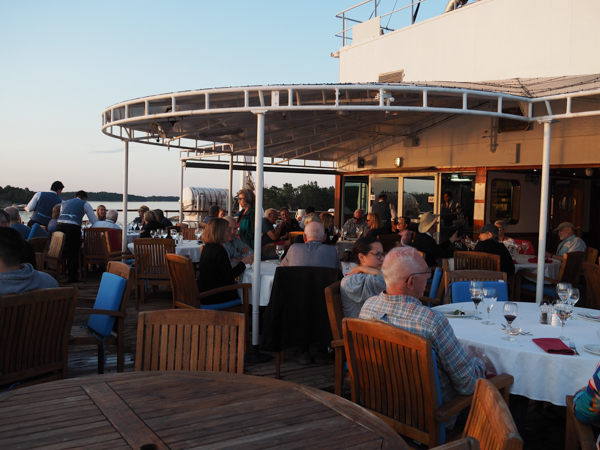 The "Lido Deck" was a favored place for meals throughout the voyage, but especially so on this first evening. We were glad the showers that met us when boarding the ship quickly dissipated. 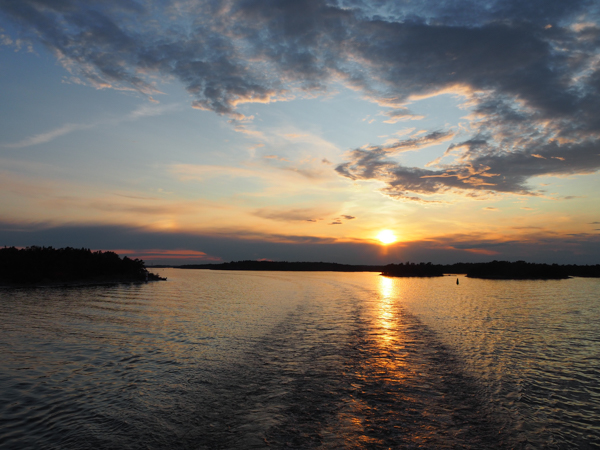 This was not the last beautiful sunset of the voyage.