Baltic Sea Cruise – Stockholm on our own

Our overnight flight landed in Stockholm in the early morning. We've learned that the best antidote for jet lag is to be active and in the sunlight. Even though our room was ready, we hit the pavement.

There had been two excursion options for the following day. We chose an out-of-town excursion, so we planned to pursue the downtown offerings on our own. We debated whether to start with Gamla stan, the old town just across the bridge from our hotel, or the Vasa Museum on a different island a bit farther away. The young woman who met us at the airport said that the Vasa Museum was only about a 15 minute walk from the hotel, so we decided to start there. HA! It was about an hour! 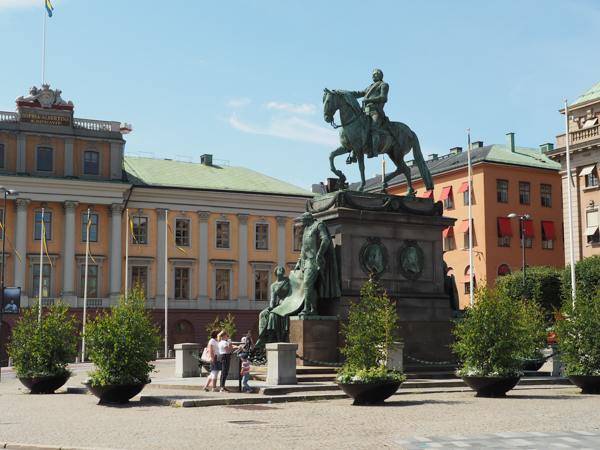 Along the way we passed this monument to Gustavus Adolphus, who established the Swedish empire in the 17th century. We don't think of it nowadays, but in the 17th and 18th centuries Sweden was indeed a Great Power, ruling most of Scandinavia, much of the Baltic States, and bits of what are now Russia, Germany and Poland.

He is known as the first great modern general. In addition he introduced administrative reforms to make government more efficient. 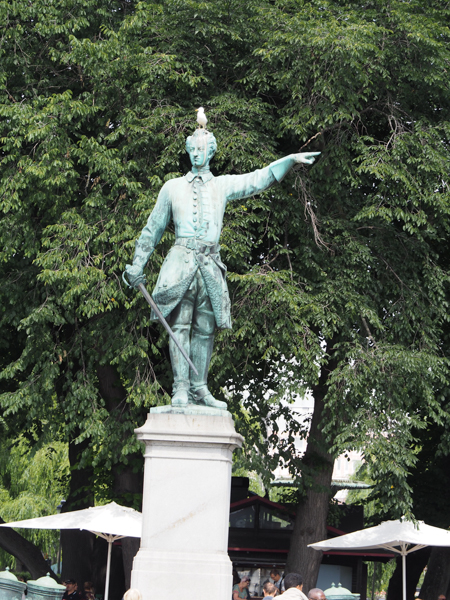 Not far away is the monument to Charles XII.

Charles XII was the last king to preside over the Swedish empire and his military misadventures set the stage for Swedish empire's long decline. (He was not the last to find his Armageddon by attempting to invade Russia.) He was and remains a controversial figure. A significant portion of the information at the link above reviews whether he was killed by enemy fire or in fact murdered by his own nobles.

The monument is in a landscaped park overlooking the Strömkajen ferry terminal. 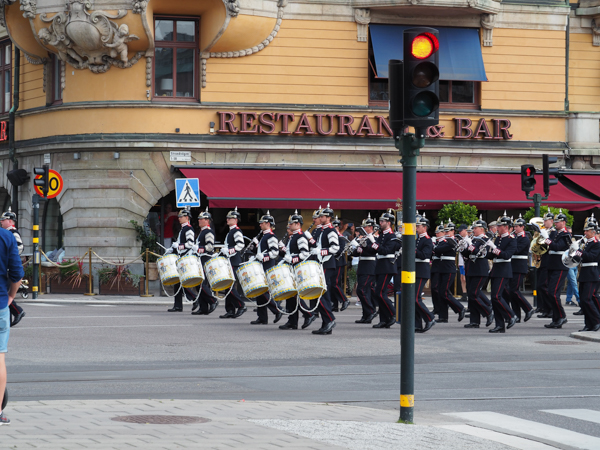 While admiring Charles, we heard the sound of music. This band was part of the changing of the guard. They were leading the new contingent of guardsmen to the palace located in Gamla stan.

We walked the entire length of Strandvägen to reach the island Djurgården. There are numerous museums, an amusement park, and extensive parkland on the island, which is owned by the monarch.

Stockholm is located on not quite a million little islands. 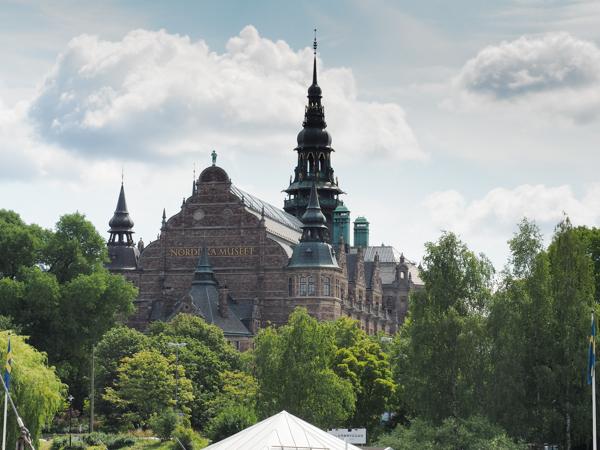 The Nordic Museum dominates the high ground. It might have been a better destination for us than the Vasa Museum, but we passed it by. 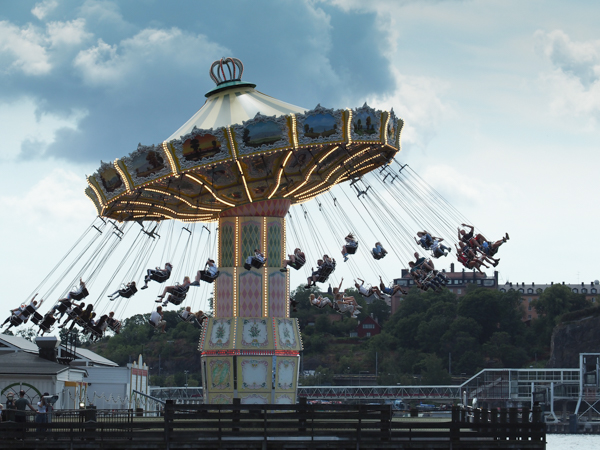 The lines at the Vasa Museum were quite long and we were tired and hungry, so we decided not to visit after all.

Prior to our walk, we had noticed a "free ferry" near the Charles XII monument. The young women there told us that we could catch the ferry near the amusement park, so we headed in that direction.

There was a fiendish looking roller coaster called Insane that defied my attempts to photograph it. The volume of squeals from all the different rides was notable. 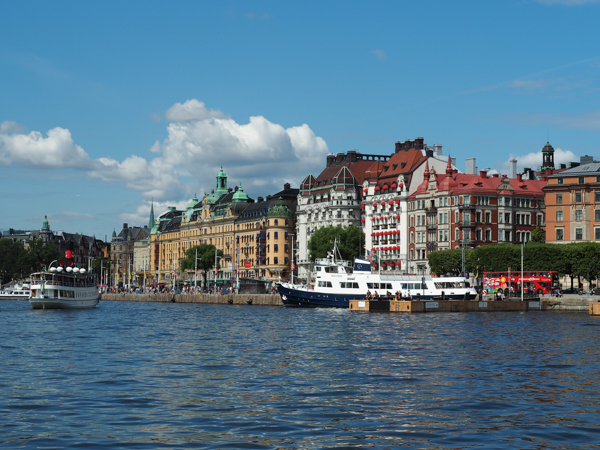 A quick ride back on the ferry was relaxing after our long walk. The area is crowded with ferries that carry passengers hither and yon. For efficient docking they nosed into the landings rather than coming alongside. This enabled them to stay in position using the engines rather than taking the time to tie up for embarkation. It also enabled many more boats to use limited docking space.

After a quick lunch at the hotel, we dragged ourselves back out for a walk around Gamla stan. The bridge in front of the hotel gave us a good view of the Assembly Hall of Parliament House, which is on its own island.

We were interested to learn that the water seen here is part of Lake Mälaren. On the other side of Gamla stan is the Baltic Sea. 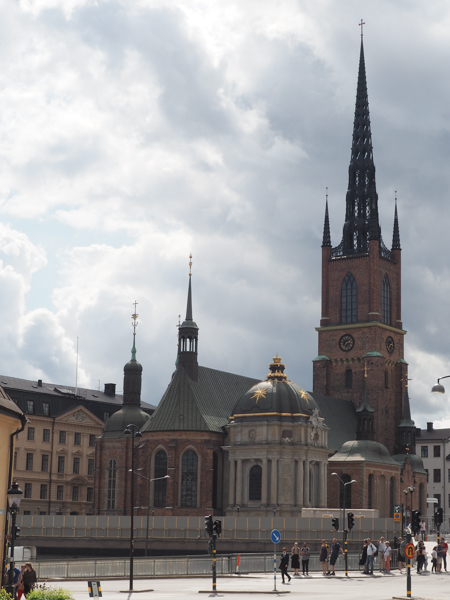 Opposite the Assembly Hall above is Riddarholm Church, the burial place of Swedish monarchs through 1950. The church is on yet another small island.

There is much more to see in Stockholm if we ever get back. 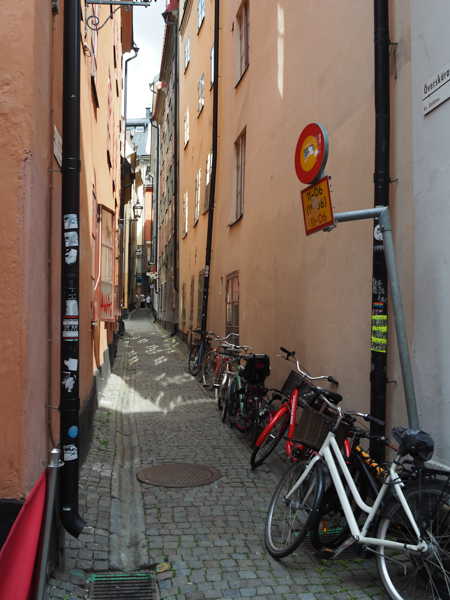 The old city center dates in part to the 13th century. Most of the streets were jammed with tourists, but this alley only had bicycles. 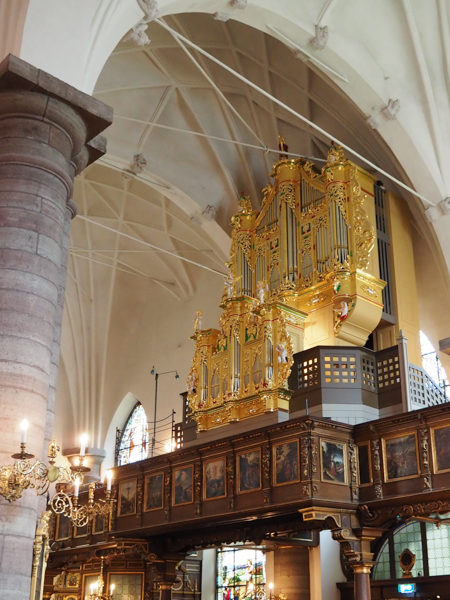 As we walked around we ducked into a church. It is the Tyska Kyrkan or Old German Church. The organ is a 21st century reproduction of the original 17th century one. We saw an advertisement for an organ recital, but it was not during our stay.

The building was originally constructed in the 13th century as a guild hall for German Hanseatic merchants, but was converted to a church in the 16th century and has been much modified in the interim.

Many of the places we would visit were associated with the medieval Hanseatic League, which brought significant German population into the cities. 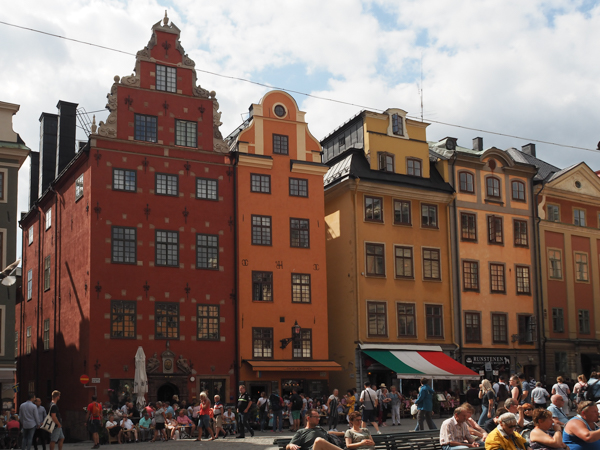 The central square or stortorget, like the rest of the old quarter, was jammed with tourists.

Our guide on the following day said that local residents flee the city in the summer for their island houses in the archipelago. I can see why if it is always this overrun in the tourist season. Were we to return I expect it would be in the late fall or winter. 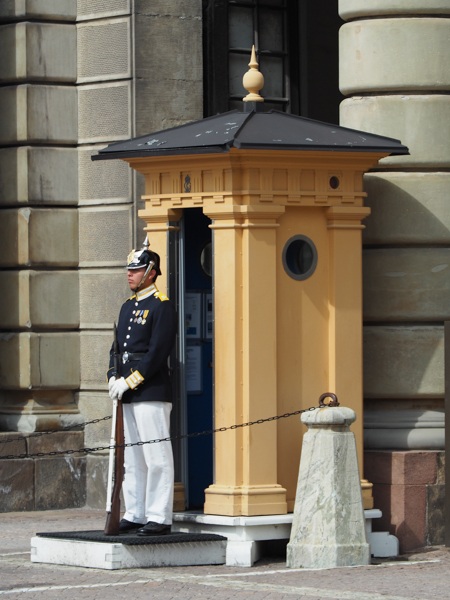 We may have seen this chap marching to the changing of the guards earlier in the day. 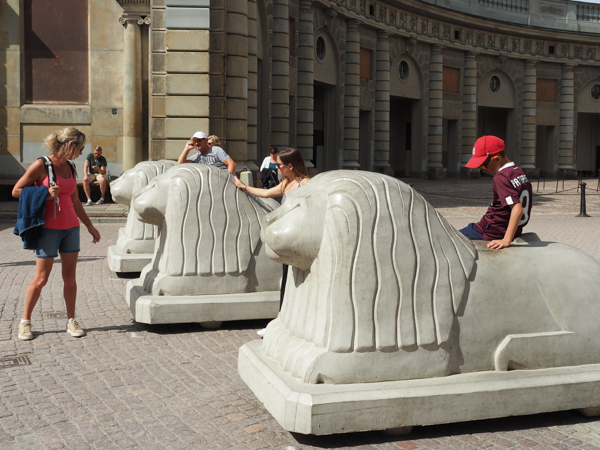 Throughout the old town we saw these concrete lions. They were put into place after a terrorist ran a hijacked truck into a crowd and protect areas where people gather. So much more attractive than Jersey barriers! The lion is an important element in Swedish heraldry and we saw many representations throughout our time in Sweden.

We saw similar barriers in many of the cities we visited -- each with its own theme. Many of them attracted children or footsore adults.

By this time we were ready to return to the hotel for a brief rest before the official welcome reception. Our trip materials suggested "dressier attire" for this gathering, but we ignored that recommendation. Our dressier attire was packed away in the suitcases that we didn't plan to open until reaching the ship.