I hadn't planned to take pictures since I didn't have my camera, but in the event, I couldn't resist. Cell phone to the rescue! 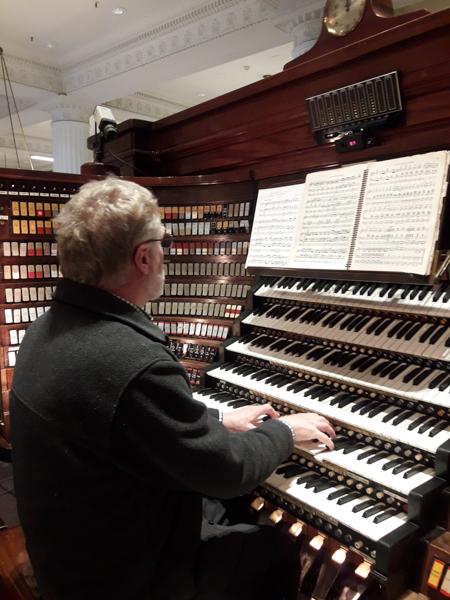 The first day of our visit, we had to catch the noon concert on the Wanamaker Organ. A black scrim shrouded the organ because of restoration underway, but it was playable. Organist Wesley Parrott invited spectators to sit (quietly) beside the console while he played.

While we were listening, a gentleman came by who (quietly) introduced himself as Mr. Parrott's childhood teacher. I would call him an "elderly" gentleman, but we're getting "elderly" ourselves!

I never realized until watching up close how sound produced by the larger ranks of pipes lags slightly behind the action of the keys. After the performance I asked Mr. Parrott about this latency, and he explained various ways to compensate for it. The discussion at the link covers many issues, but he also mentioned others.

The other revelation was that much of the music is written for the treble. The bass is usually, but not always, reserved for the foot pedals.

Part of the current restoration is the application of 2 1/2 pounds of gold leaf!

One of the items on our to-do list was touring Philadelphia City Hall. When we last visited the city, the tower was closed for restoration, so we deferred the tour until "next time." Now was the time!

No loitering on the north balustrade -- ouch! Other areas of the building were protected from birds' roosting.

There is an online virtual tour of the building (opens in new window). 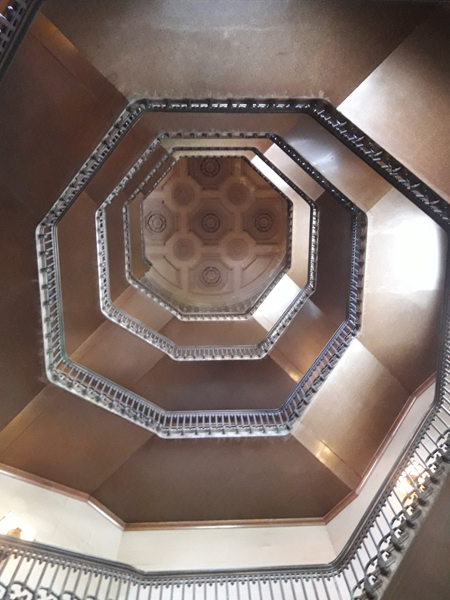 The interior tour started in the northwest corner. The cantilevered stairs are supported by granite slabs inset into the walls.

The building is one of the largest in the world constructed entirely of masonry without interior steel supports. The city investigated demolishing it in the mid-20th-century, but it was too expensive.

The designs on the metal bannisters of the two stairwells we used were different. I expect the other two had unique designs as well.

Our guide said that the cost overruns during construction were tremendous. I can believe it. 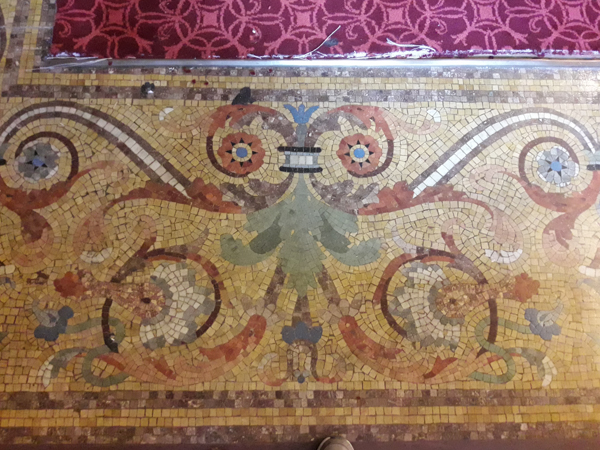 The original floor covering was patterned vulcanite, an asphalt-based material made by a local company (opens in new tab; apologies for the ads). It turned out not to be suitable for high-traffic areas, especially during the summer when it became very sticky, and was soon overlaid by another new and high-tech (at the time) product: linoleum tile. The tiles are still in place in many areas -- more practical, but not nearly as attractive as the vulcanite. 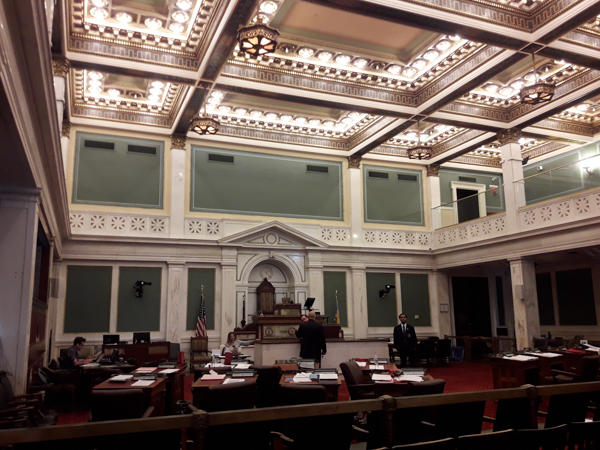 We visited many rooms of various kinds, but I took pictures of only a few. This is the City Council chambers. It was lunch break, so nothing was going on. 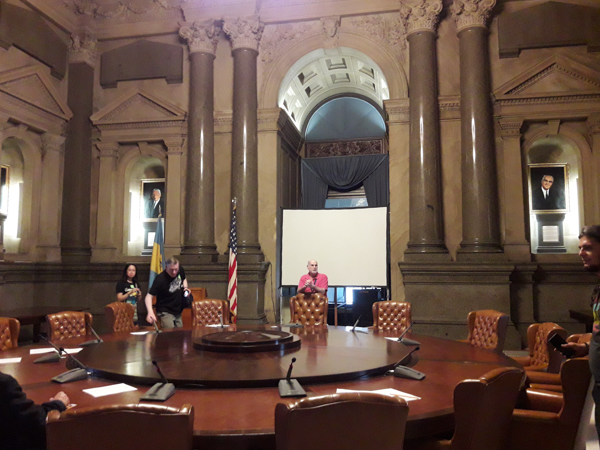 Our next stop was the City Council Caucus Room.

It is easy to see from these pictures how the building went over budget. The appointments are lavish and I haven't even included pictures of the sculptures and other artwork. 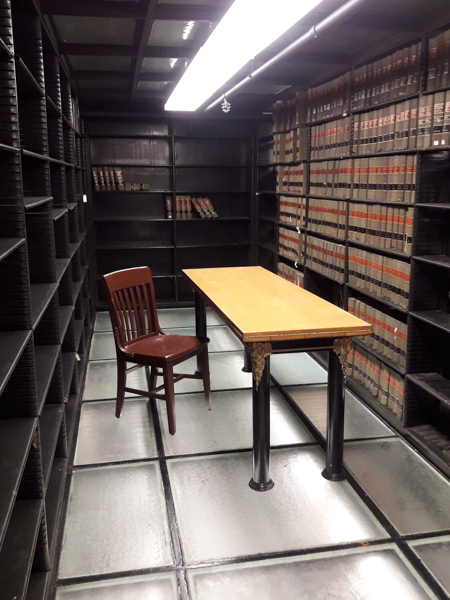 The law library is a mere shadow of its former self. Practically all legal research is now done online and most of the shelves are bare. Here and there are collections of periodicals with the note that the subscription was stopped years ago.

The room, designed in a time when artificial light was at a premium, used large windows and translucent glass floors to maximize both natural and electric illumination. 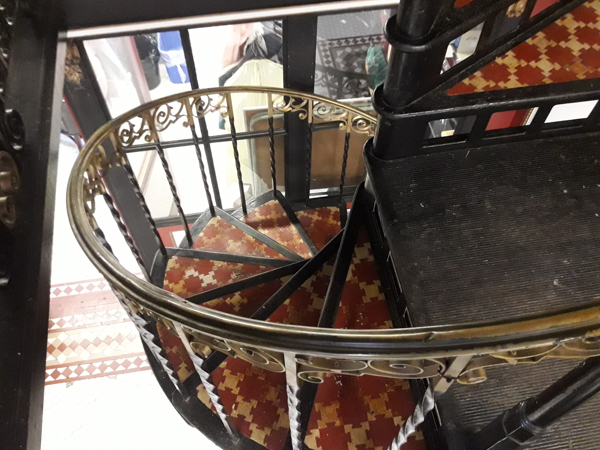 The library had three levels accessed by this spiral stair. 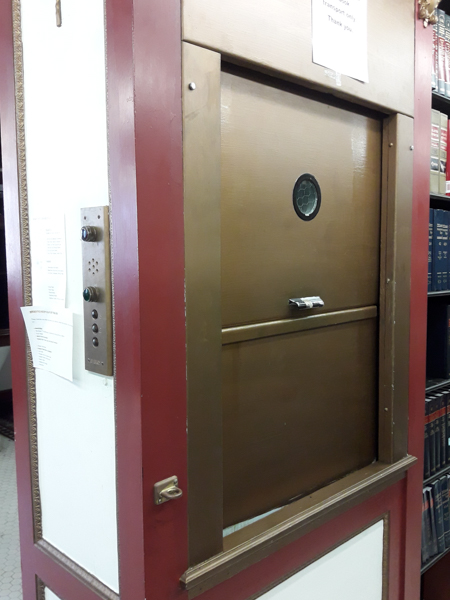 An electric dumb-waiter enabled stacks of books to be moved between floors without the dangerous necessity of carrying them up and down the spiral stairs. 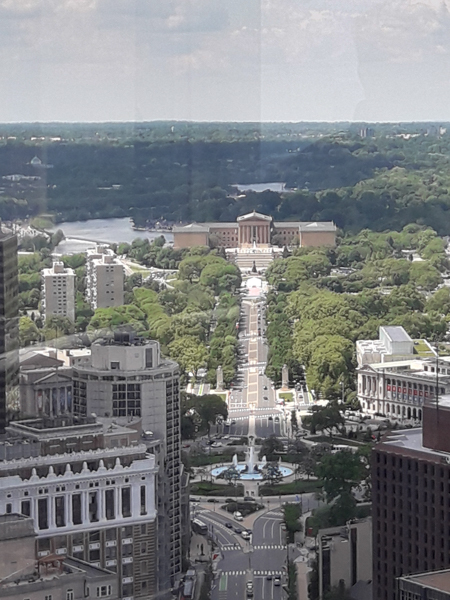 The "high point" of the tour was the tower.

The observation platform is some 500 feet above street level. Ben Franklin Parkway stretches northwest from the city hall to the Philadelphia Museum of Art. 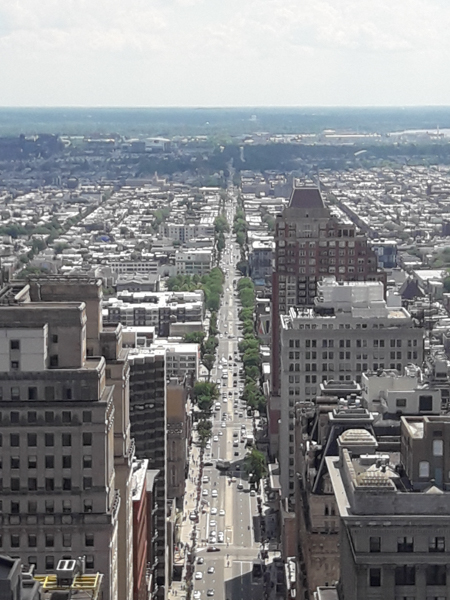 Broad Street was part of the original 1681 Philadelphia plan. The street south of City Hall is designated the Avenue of the Arts.

When visiting Philadelphia in the past we have stayed in a different neighborhood, but "our" hotel was booked this time. We found a place at the Doubletree on Broad Street, which is in this picture if you know what to look for. We both decided that although the hotel was convenient and comfortable we preferred our former location closer to Rittenhouse Square. 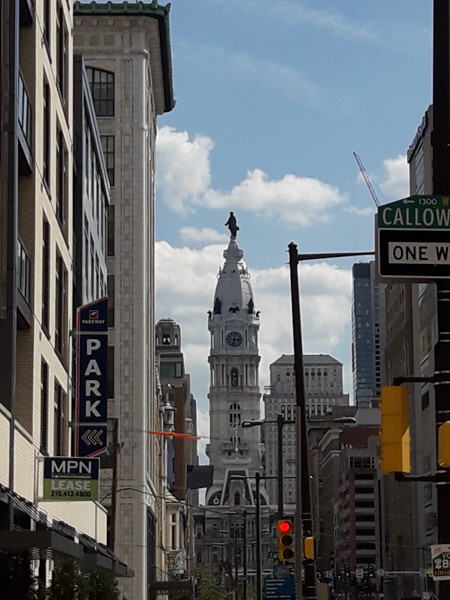 North of City Hall is the first section of the Rail Park. Many years ago on a trip to New York City we visited the High Line and were entranced. We hope that the Rail Park will become as much an asset to the city of Philadelphia.

As we walked along Broad Street, we looked back toward the City Hall. 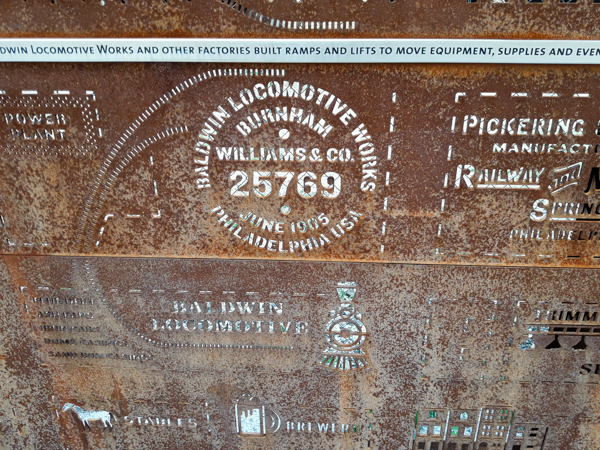 At the entrance to the park a commemorative display celebrates the industrial past of Philadelphia. Jim's grandfather worked at the nearby Baldwin Locomotive Works. 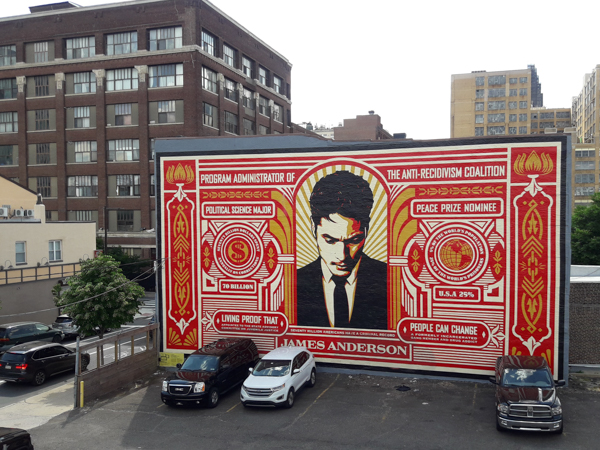 The other end of the rail line features a mural honoring James Anderson, the founder of the Anti-Recidivism Coalition.

Philadelphia is noted for the murals that enliven just about every otherwise blank space in the city.

After this couple of days on our own, the next two days were focused on Drexel events.