Most people think of fancy paint jobs in this context. There were many such, but some were only partially restored and some were deliberately left "rough." Here is a sample of my favorites. 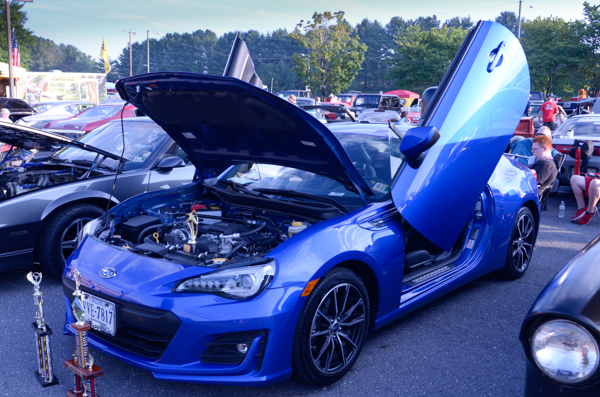 I was surprised to see a Subaru at a "classic cruise in." And such a Subaru at that! The owner has added after-market "Lambo" doors to a Subaru BRZ.

His trophies show that he's done a good job of his upgrades. 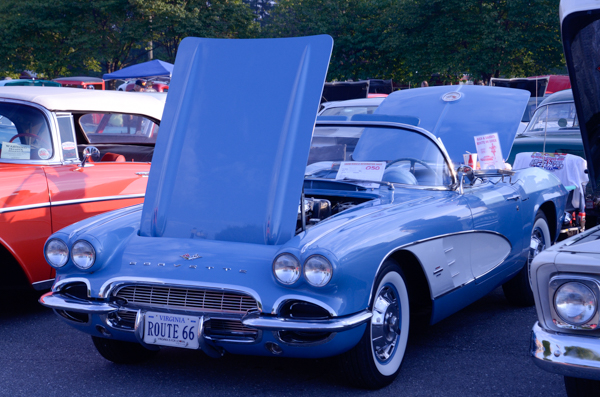 There were any number of Corvettes and Mustangs. I chatted a while with the owner of this stingray. In a former lifetime I dated a guy who was wild about Corvettes (what was I thinking?!?!). He traded his 1973 Corvette for a classic 1963 split-window model only to be disappointed that it was a true sports car rather than a sporty looking luxury car.

The relationship was doomed. Last I heard of him he had traded the 'vette for a Nomad.

I wonder if this owner stood in line at the DMV to get that license number. 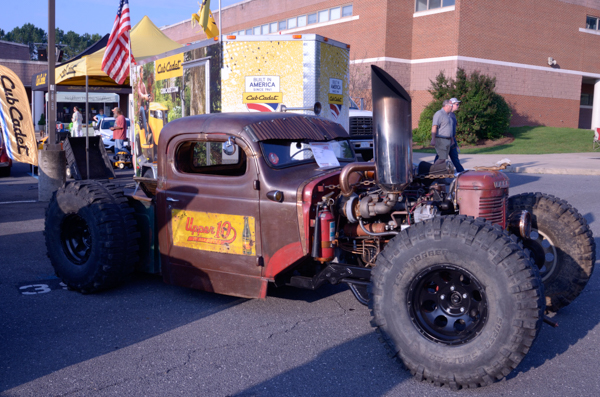 The owner has gathered bits & pieces from far and wide to build this monster. The grill started life as a Farmall tractor and who knows where the rest of it came from. There was a young man lovingly polishing the exhaust pipe. I asked him if it was his car, but it belonged to his cousin. Another friend teased him saying he'd better not claim it for his own!

I do not recall Upper 10, but it was a Sprite-like soft drink made by Royal Crown. RC Cola was one of my favorites as a kid, but the lemon-lime offering when & where I grew up was 7-Up.

The vehicles were spotless inside & out. I asked this guy about a speck of dust on the front fender only to be informed that he hadn't gotten there yet. 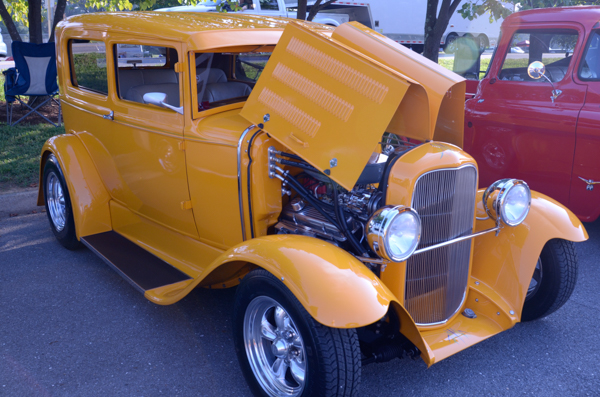 I don't think it came from the factory looking this snazzy.

The only monster truck I saw at the event. 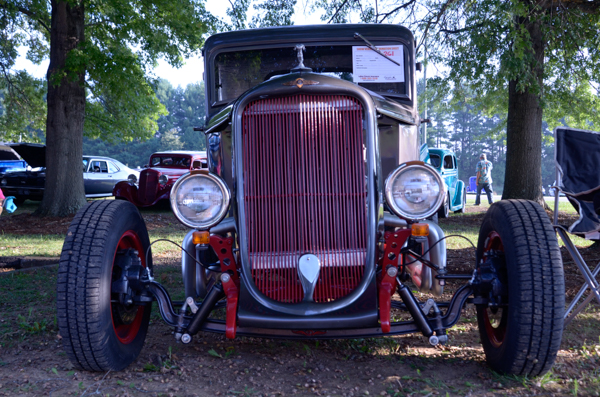 This truck is more to my taste. The logo identifies it as Dodge Brothers. I was not aware of the history of Dodge, but it is fascinating. Check out the link. 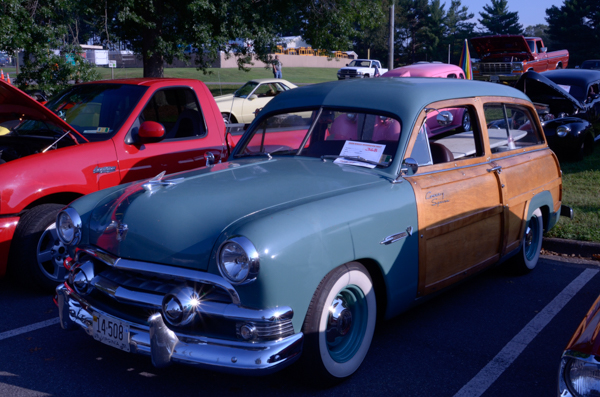 Vintage Ford woodies use actual wood not the printed or applique decorations that I grew up with. My family never owned one, but there was a time I thought they were cool. 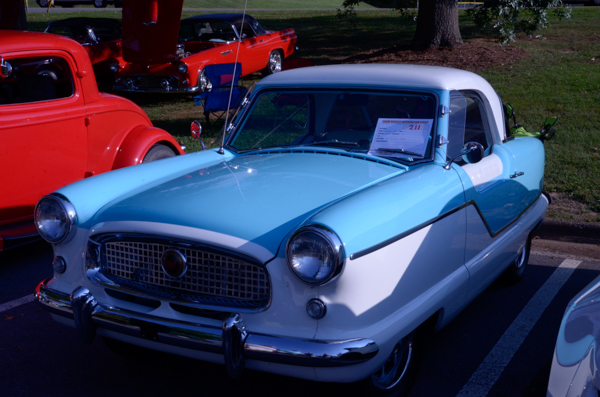 A true classic: the Nash Metropolitan.

I didn't know of any Metropolitans in my town growing up, but I did know folks with Ramblers. The song Beep Beep was quite popular with them. 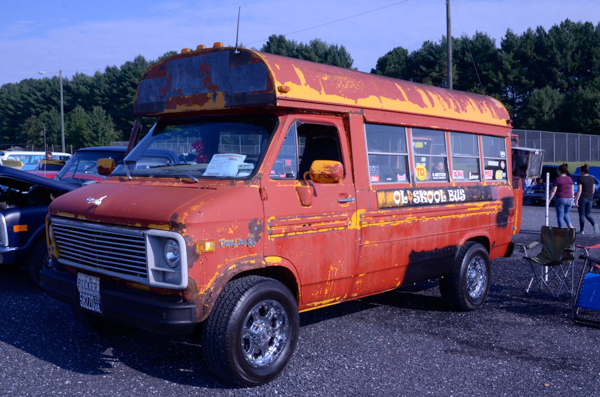 Not every exhibit was meticulously restored! 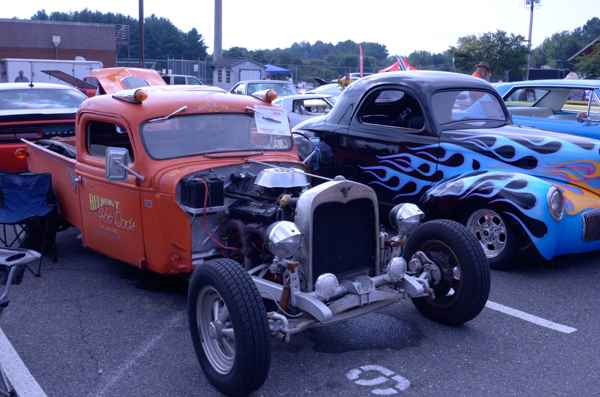 Flames were a common design motif. 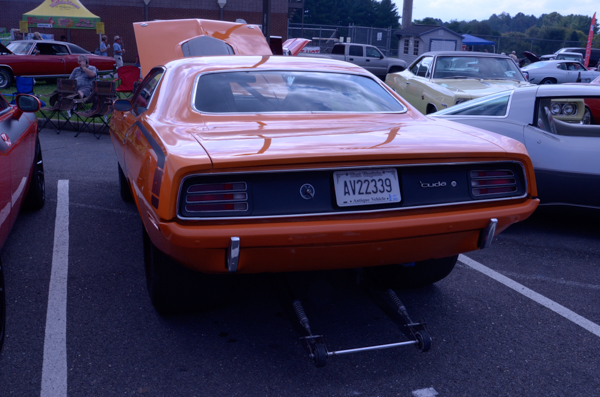 Wheelie bars were in evidence on a number of exhibits.

My best friend in high school drooled over the original Barracuda. One of her father's many jobs was as a Plymouth salesman and he let her borrow cars off the used car lot -- never a Barracuda though. We would each chip in 25¢ (that's about $2 apiece in 2018 money) for gas and hit the road on summer days.

Before she married she was a drag racer for a while -- a pretty ground-breaking thing for a girl in Mississippi in the late 60s! 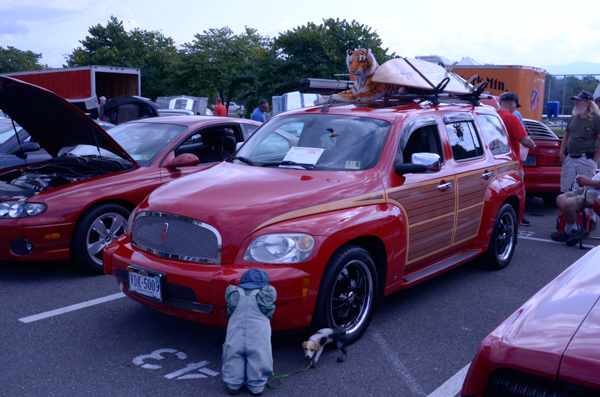 This fake woodie had lots of geegaws in its display. I saw many weird crying kid dolls, but this was the only little dog "peeing" on the tire.

I never could figure out if the kid was supposed to be crying in envy or ??? Apparently other inquiring minds want to know.

They are known as "time out dolls." 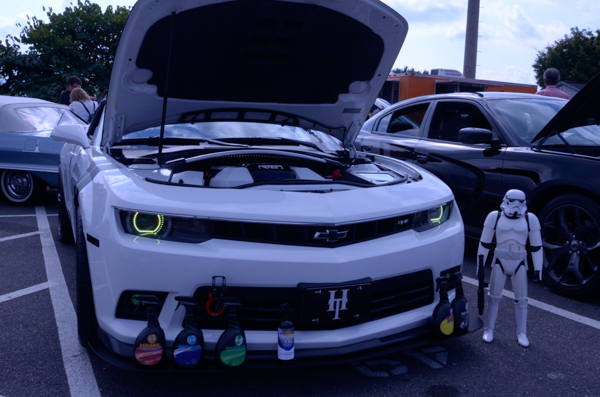 The "Dark Side" has captured the owner of this car. The LED lights, yellow in this picture, changed colors. 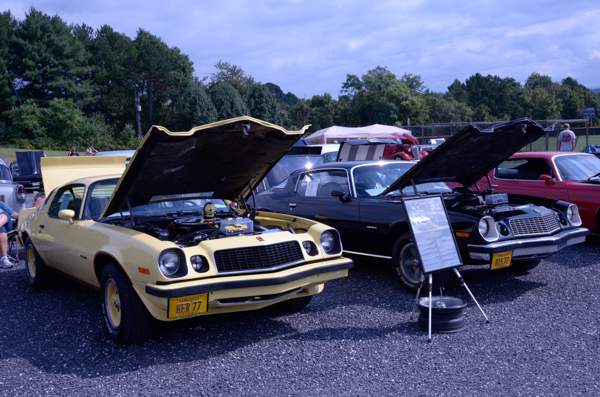 Camaros were also popular exhibits, but this is the only "His" and "Her" display. The owners were not around and the sign board simply described the specs for the cars. I'm sure there's a story here and I'm sorry that I couldn't find out what it is.

Jim still mourns the Z28 Camaro he had in grad school. Someone stole it and by the time the car was found it had been stripped beyond recovery. They never caught the thief.