The next morning's adventure was a speedboat ride from Tórshavn around the neighboring island of Nólsoy. We saw spectacular bird cliffs (more puffins!) and had a fabulous lunch.

During the first nights of our stay in the Faroes we resided in the Hotel Føroyar on the island of Streymoy. Like so many of the houses it had a turf roof. The views were spectacular overlooking the capital city of the Faroe Islands: Tórshavn. 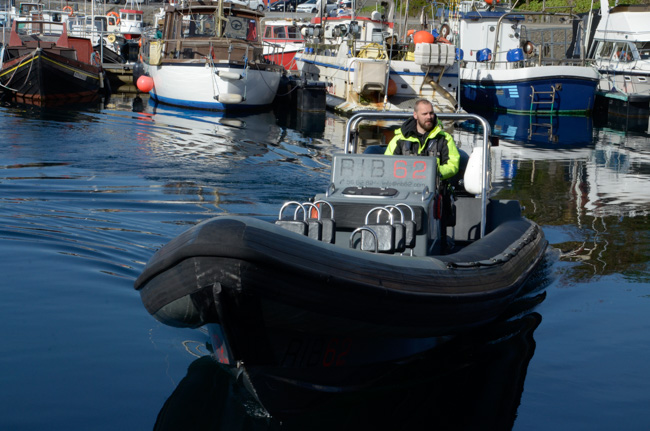 On our excursion to Nólsoy we would be traveling in RIBs (rigid-hulled inflatable boats). These differ from our familiar Zodiacs in their rigid hulls and in their incredible horsepower from a pair of 300hp engines. Our driver said that their top speed was about 65mph and I think we hit it! 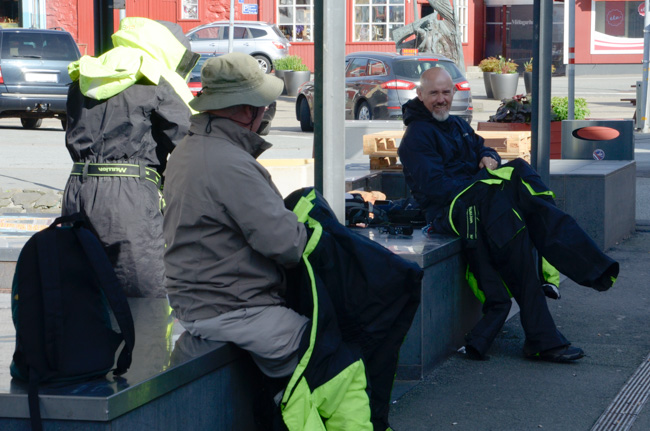 The excursion company provided insulated and waterproof suits for us. We didn't have rough water and consequent splashing on our excursion, but the warmth was still welcome. 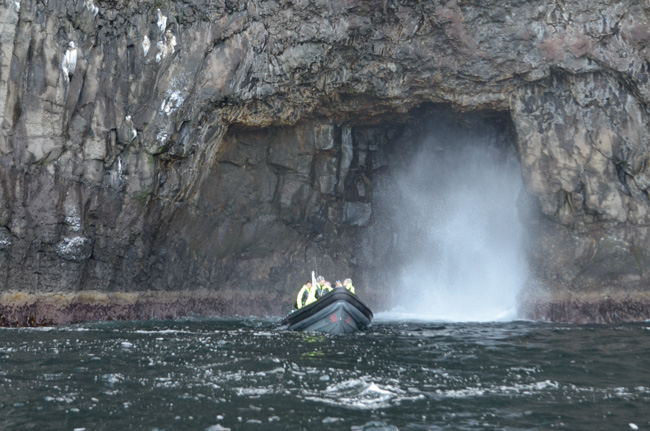 There is a village on Nólsoy that we will visit later, but first we made a circumnavigation of the island to visit wave-carved caverns and bird cliffs.

Even though the sea was calm on the day of our visit, the waves made impressive booming blows in this shallow cavern. 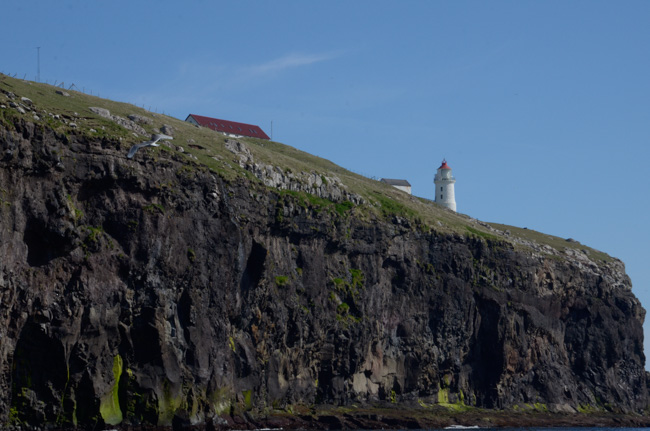 Nólsoy has two lighthouses -- this is the older one dating from 1893. It is now automated. 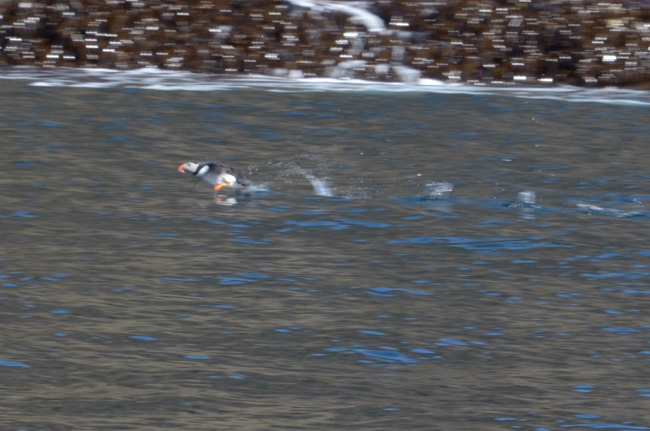 We passed many puffins, who nest atop the cliffs. When they take off, they run quickly along the water with furiously flapping wings. It's an amusing sight. 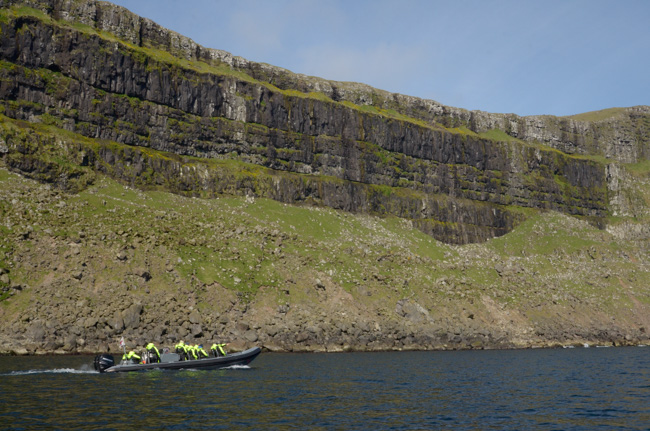 The islands are volcanic in origin. Several layers of basalt can be seen here. 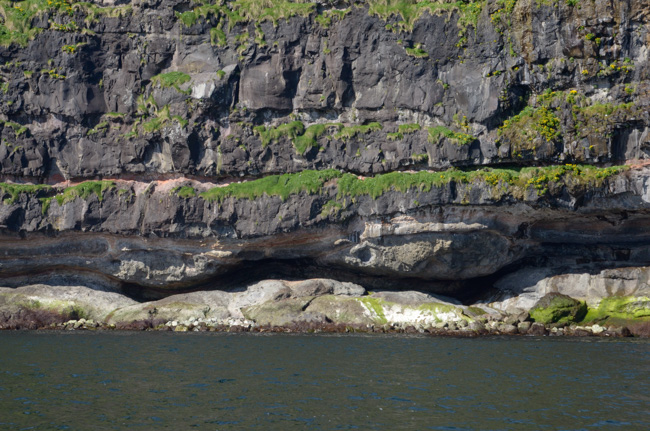 In some areas, the time between volcanic eruptions and lava flows was long enough to allow softer materials to separate the basalt layers. These have been eroded by the sea.

Some of the eroded caverns are quite deep. Various forms of algae add brilliant color layers to the rocks. 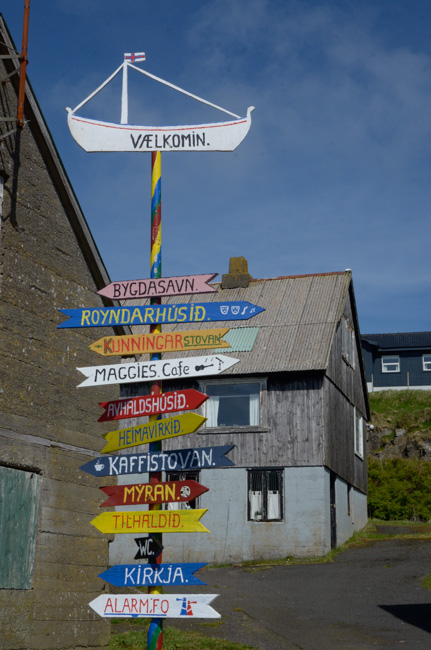 After oohs and aahs over birds and scenery, we landed at the village to stretch our legs. The first order of business was to shed our special suits because we would return on the regularly scheduled ferry to Torshavn. Then came the obligatory WC stop followed by a stroll through town. Finally -- lunch: cod steamed over an open fire en papillote with rhubarb compote. Sounds weird, but yummy. The local beer got good reviews as well. 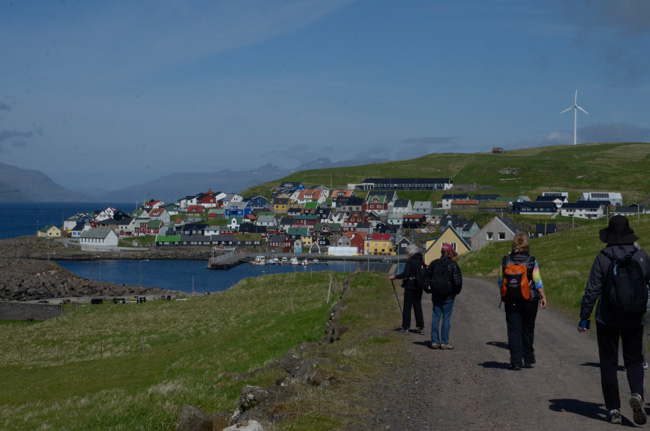 Outside of the village there are ruins traditionally held to be the home of a Scottish princess who eloped with her lover and settled here. The legend is that her father tracked them down and threatened to kill the young man, but relented when the princess swore that they would never leave Nólsoy.

Tom, our Scottish geologist, says the legend is bunk, but it was a nice walk into the country. 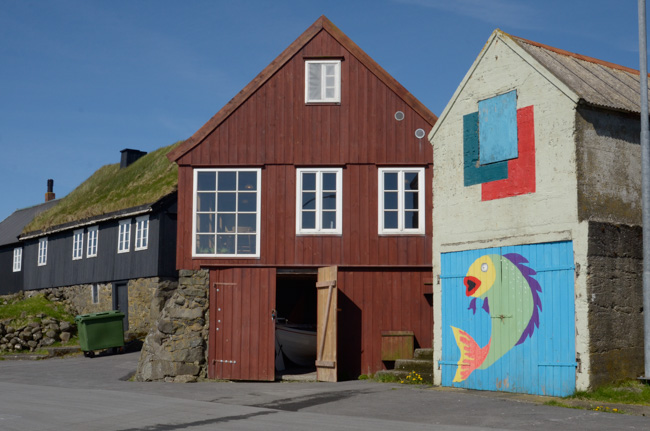 Our lunch spot was in the red building. The boat that can just be seen through the open door is the Diana Victoria. Ove Joensen rowed the boat 900 miles from Nólsoy to Copenhagen. His first two attempts only got as far as the Shetland Islands, but on the third in 1986 he made the complete trip in 41 days and became a Faroese hero. It's a great story. Check the link for details. 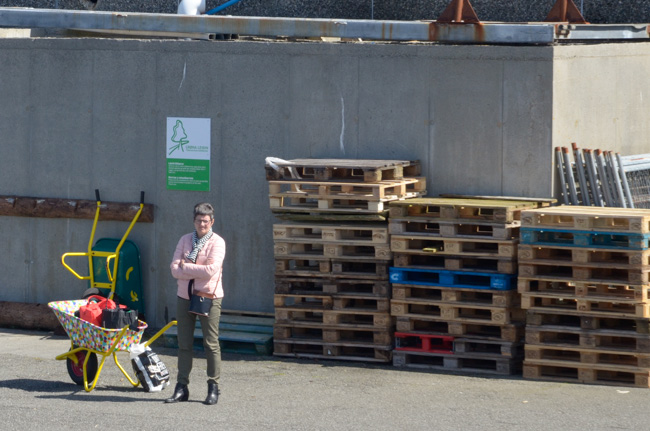 As we walked down to the ferry dock, we passed a display of loaner wheelbarrows. They were very handy for folks who were bringing heavy loads to or from Tórshavn. All the loaner barrows were painted in bright designs, so I'm sure there were no problems with their disappearing permanently. The neighbors would talk!