In spite of having received a pre-trip "culture gram" about these self-governing Danish islands, I had no particular expectations. For that reason I shouldn't have any basis for saying that I was surprised by what we saw ... but I was. The language, for instance, I had vaguely expected to be Danish, but it is actually Faroese, which is more aligned with Icelandic and Norwegian. After all the sheep we had seen on our travels, I surely expected sheep ... but not exactly these unusual sheep. After visiting so many remote communities that were hanging by a thread, I was was delighted to see a diversified and thriving island economy. Our entire stay was one pleasant surprise after another -- including the beautiful weather. And the food!

Before arriving, however, I received an introduction to the difficulties these islands have had to overcome. Our flight was on Atlantic Airways, the national carrier. The description at the link, however, doesn't do justice to the tale of frustration and skullduggery that we found in the airline magazine celebrating its 30th year of operation. Prior to 1988 the Danish airline Maersk Air had a monopoly on air service to the Faroes. Service was, apparently, NOT its most important product because it cancelled scheduled flights if a more lucrative charter opportunity arose for its limited number of aircraft. Travelers to and from the Faroes could never count on a flight taking place as scheduled. A group representing the Faroe government and others began negotiating with another partner to form a new airline with majority ownership in the Faroes. They met in secret at previously undisclosed locations to hammer out the details and Atlantic Airways started service in 1988. Lawsuits ensued. After a shaky start the airline appears to be thriving. 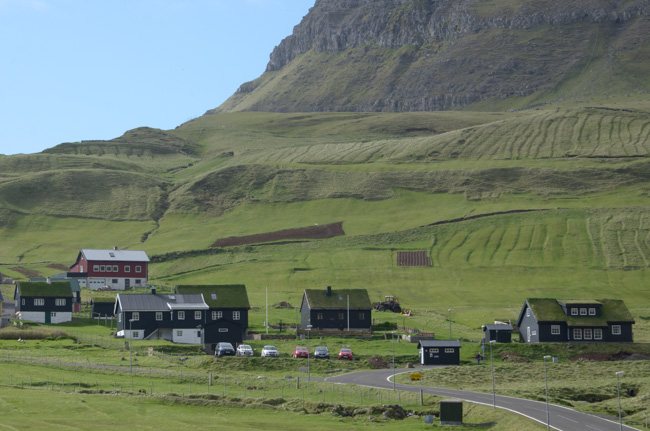 The Faroe Islands airport is located on Vágar Island, so before proceeding to our hotel, which was on a different island, we visited some local sights. The long hours of daylight gave us plenty of time.

The village Gásadalur was isolated from the rest of the island until 2004 when the government built a tunnel through the ridge separating it from "civilization." Until then the only access was a footpath up & over the mountains. The tunnel has brought the village back from the grave. 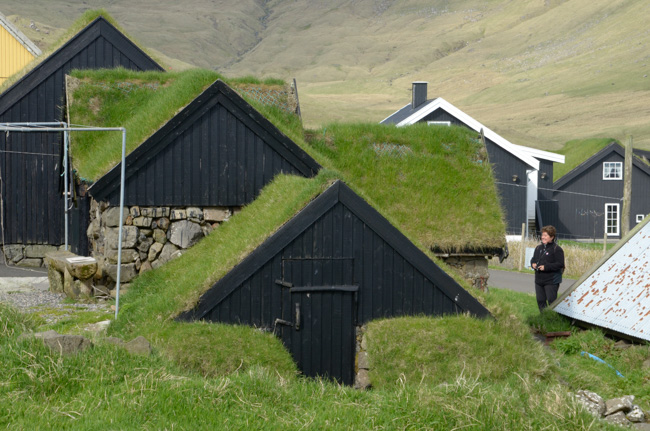 Turf roofs are very common even in the larger towns. Our guide told us that they would last 70-80 years if properly cared for and that they provided excellent insulation. Proper care includes occasional watering if there is inadequate rain, and keeping the grass trimmed -- either with weedwhackers or simply by putting a lamb on the roof for a while! Most of the roofs we saw were well-maintained, but we never saw a lamb on a roof.

If the roof is allowed to become overgrown, it will fail due to the increased weight of dead grass. 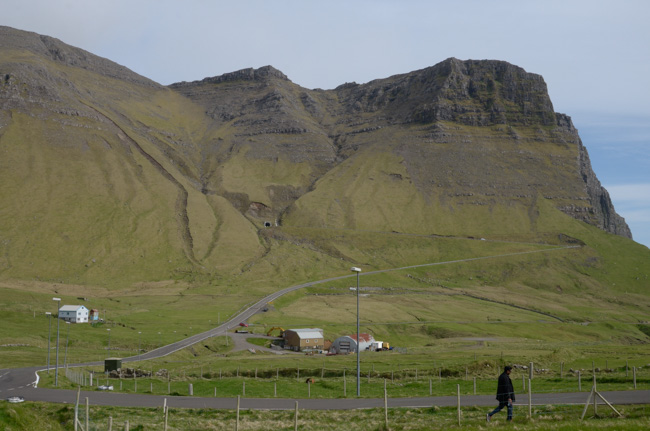 The ridge separating the village from the rest of the island was a significant barrier. The footpath leading to the outside world followed the valley leading up to the right of the tunnel mouth. They must have had a very fit postman to make that trip on a regular basis. 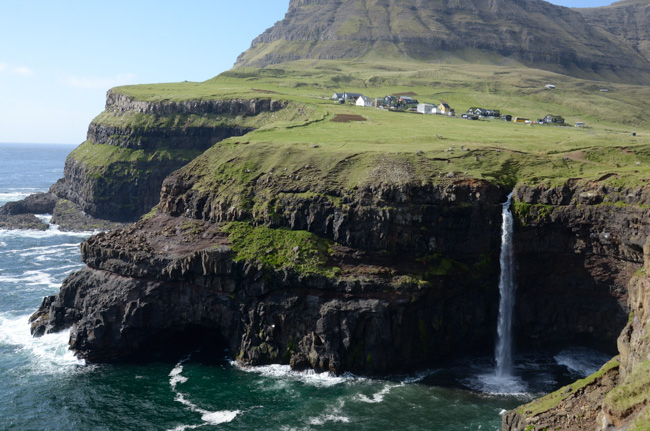 The waterfall below the village, Múlafossur, was the most dramatic of the many that we saw.

The Faroe Islands get so much rain that there is little provision for capturing and storing water. If there is no rain for as little as two weeks, the government institutes water usage restrictions. 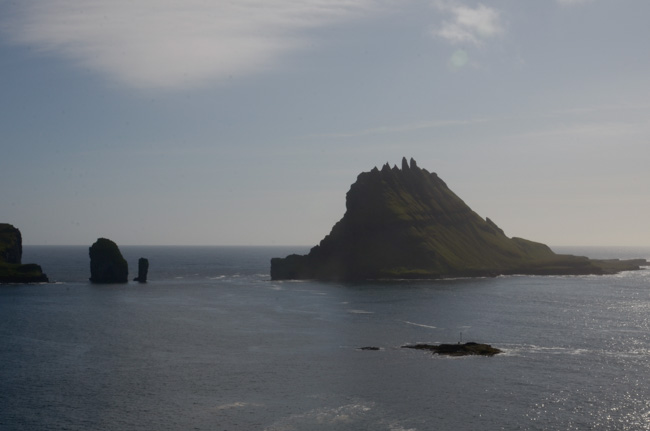 Most of the islands in the archipelago are uninhabited. A few are used seasonally to graze sheep. 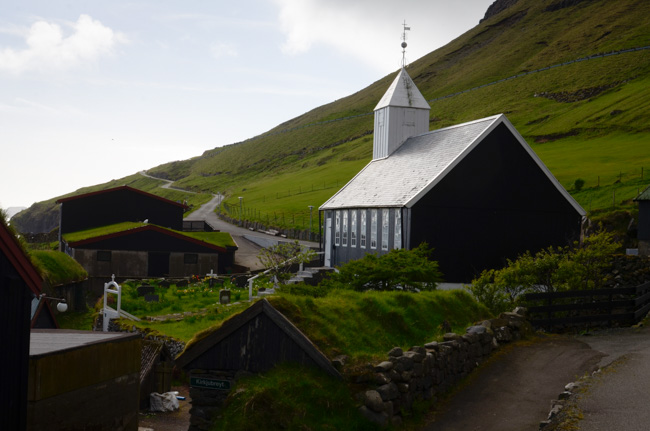 We made another stop in the village of Bøur to visit the church. 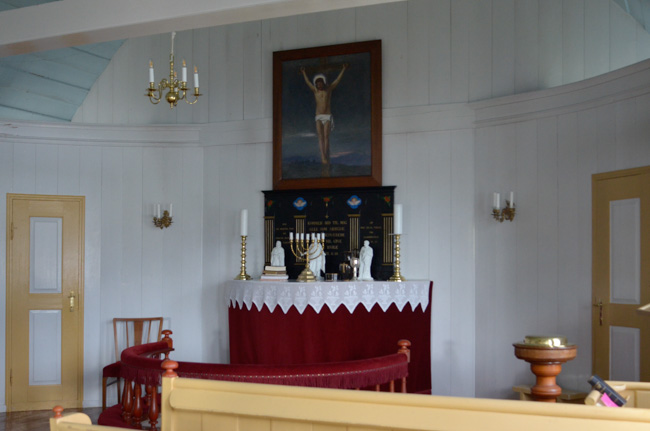 Most of the churches are Lutheran. One feature that puzzled us was the presence of what looked like a menorah on the altar. The syvarmede candelabra is indeed based on the menorah and is an ancient fixture in Danish churches. The oldest in existance is in Viborg and dates from the 15th century. 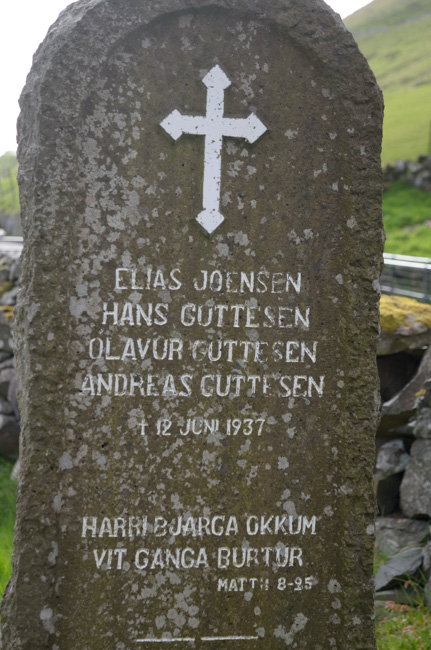 The cemetery included this memorial to several men lost at sea. The Biblical reference comes from the story wherein Jesus calms the storm at sea.

The names prompted me to ask our guide if the Faroe Islanders used patronymics as do the Icelanders. Her answer was no. Doing some research on the WWW after returning confirms that. At one time the Faroese used patronyms, but Danish law required family surnames beginning in 1828. At that time many families "froze" their patronyms to comply with the law. So the Guttesens may have been related but they weren't necessarily sons of the same father. 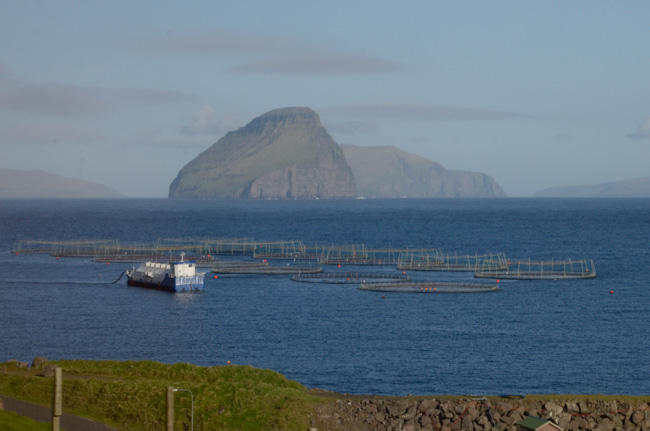 Salmon is extensively farmed in the Faroe Islands. It supplies half of the export value of the islands.

The climate, although moderated by the Gulf Stream, does not lend itself to cropping. Most of the crops are root crops, such as potatoes and beets, but we also saw rhubarb used in many ways that were unusual to us Americans. I've never liked rhubarb, but it was delicious as prepared here.

The average temperatures vary from 38°F in February to 52°F in August. It rarely dips below freezing. The highest recorded temperatures in summer are in the 70s. Wind and rain are common in all seasons.