Normal weather, i.e., wet and foggy, caught up with us again at the Shetland Island of Mousa.

This was our only true "wet" landing – although it wasn't very wet. There was no pier or even large boulders for us to clamber onto – only a sloping cobbled beach. Walking over the cobbles was treacherous and for once there were no ship's towels to provide better footing.

At one of our landings, I've forgotten which one, the LANDING wasn't wet, but we were advised to dress in our waterproofs to board the Zodiacs from the ship! The refitting of the ship exacerbated its tendency to roll and the disembarkation platform on its side was periodically under water due to a heavy swell. Passengers needed to be nimble to hop from the stairs to the platform to the Zodiac without getting soaked! The staffers who helped us on and off were frequently in water up to their knees and occasionally deeper. 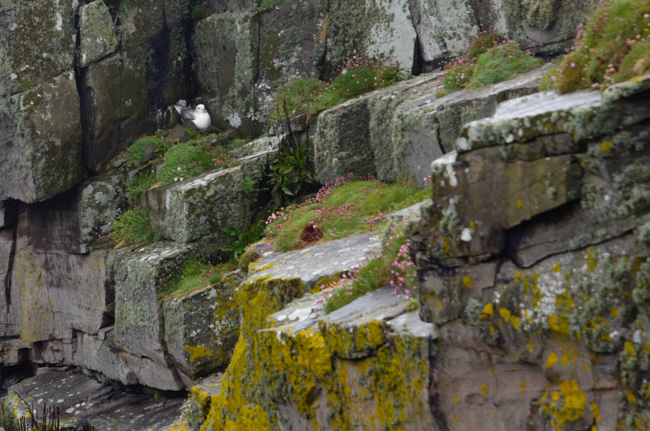 The area is noted for its seabirds and as usual on our landings the birders took off on their own. The weather derailed plans for a long hiking group. The precipitous rocky shores of the island provided nesting places for many birds as well as nooks and crannies for plants. 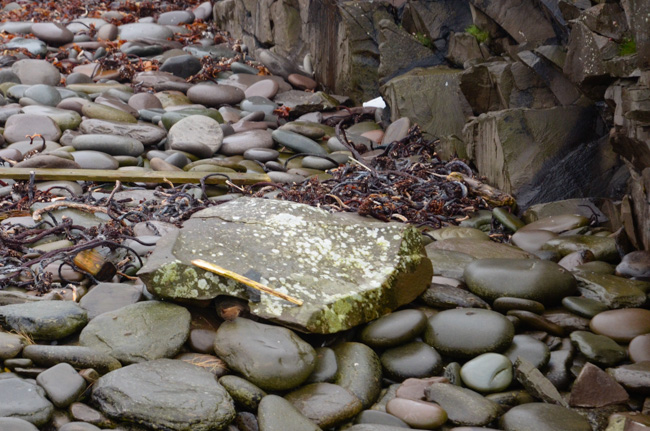 Birds came in all sizes. The tiny Shetland wren breeds on boulder beaches throughout the Shetland Islands.

Archaeologists believe that the Iron Age builders of Mousa Broch used the structure as a residence rather than a fortress. Later use by the Vikings, however, was for protection.

It is the best preserved of the many broches in the Shetlands. Experts speculate that the small population of this island had no need to cannibalize the structure to build their own more modern dwellings – particularly since building stones were readily available everywhere on the beaches. 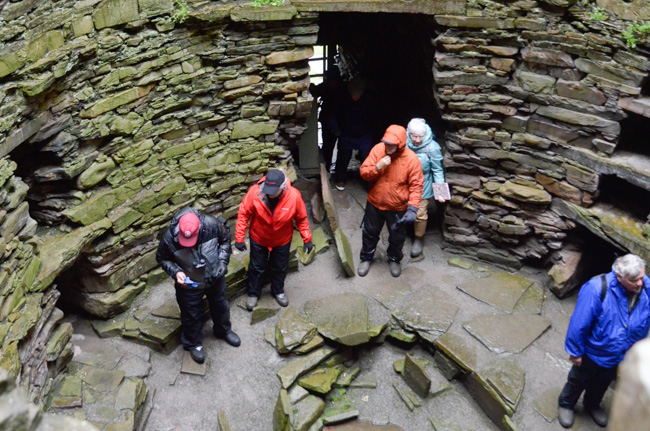 Cavities built into the thick base of the walls might have been used for sleeping quarters or for storage. The center of the inner "atrium" was probably a fire pit. At one time there would have been multiple floors within the atrium.

The interior of the broch featured a steep stairway within the walls. It was original and landings indicate where additional floors would have been accessed. 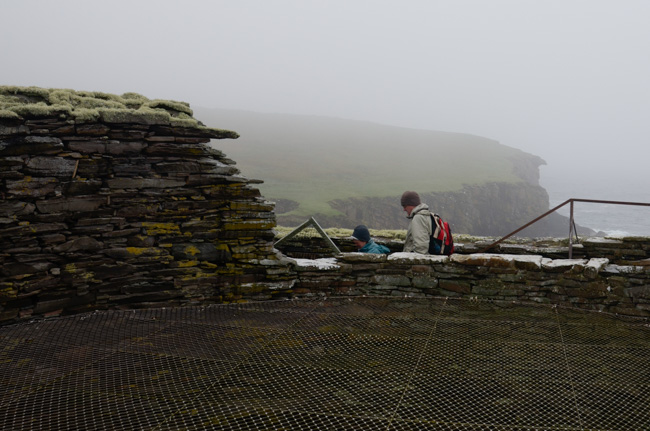 Weather limited the expansive view, which can extend to the Shetland mainland. A modern screen keeps birds out of the interior of the broch. 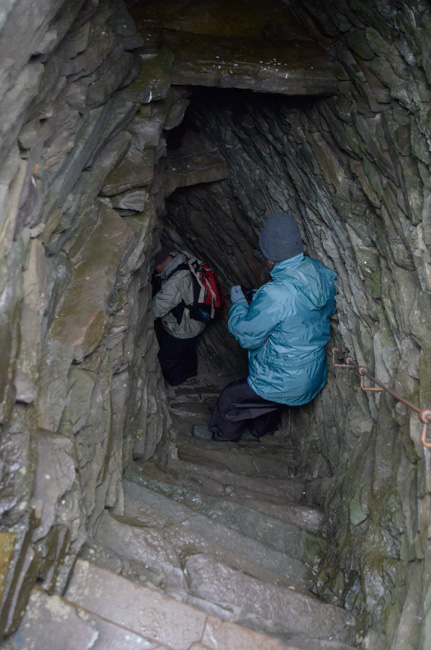 The stairway was steep and treacherous, but openings into the atrium provided enough light to see – even without the flash on my camera. 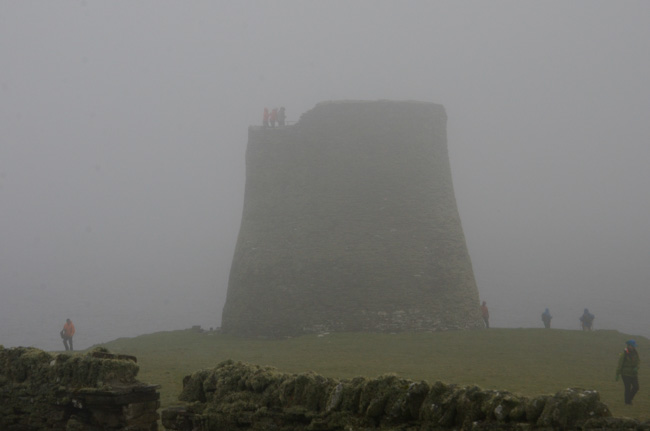 I was surprised to learn that there has never been a systematic archaeological investigation of the broch and its surroundings. Experts speculate that it may have been the center of a larger settlement, but no one knows.

Sensing devices are now built into the walls of the broch to provide early warning of any tendency to shift. 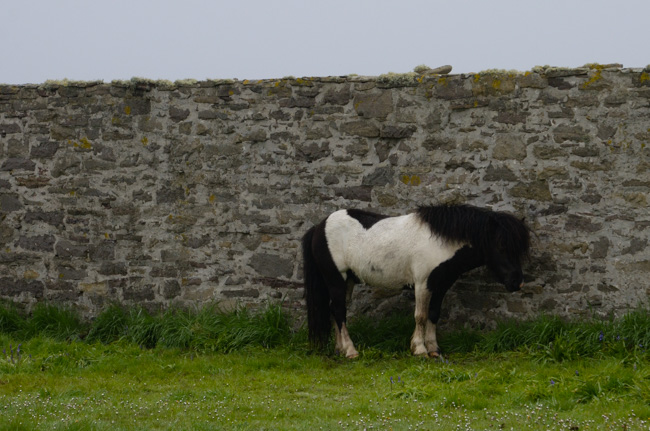 As we approached another prehistoric site I was pleased to see a group of Shetland ponies in their ancestral home. I remember these from my childhood as little demons, but the ones we saw in Shetland seemed placid enough. Perhaps because there were no little girls trying to ride them! 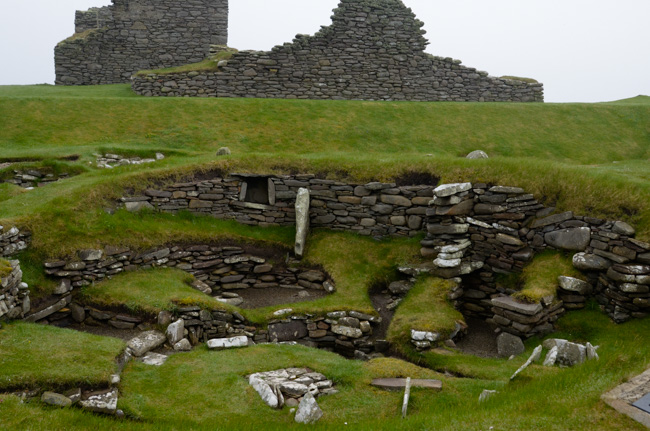 Jarlshof is another Stone Age site uncovered by violent 19th century storms. This site differs from Skara Brae in that it was inhabited more-or-less continuously from about 2500BC through the 17th century. 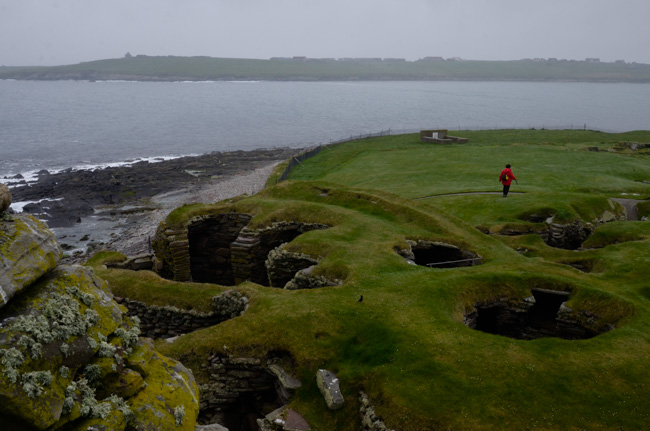 No one knows how large the site may have been originally since much of the surrounding land has been eroded by the sea. Stone age construction was succeeded by bronze and iron age adaptations. There had once been a broch like the one we saw at Mousa, but it has been largely dismantled and the stones used elsewhere. 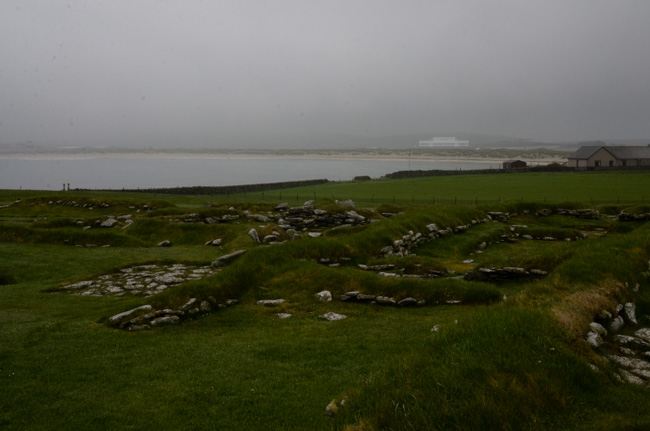 A Viking settlement may date as early as the 9th century. This site contains the largest such remains anywhere in England. 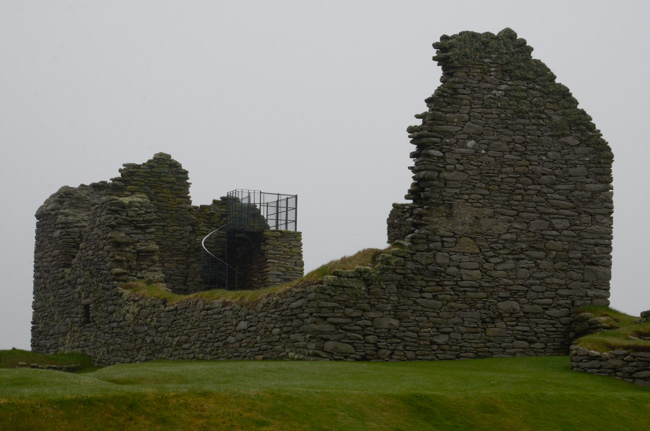 The youngest ruins on the site are the most visible. A Medieval farmhouse was converted into a fortified manor in the 16th century and abandoned in the late 17th. These ruins inspired Sir Walter Scott to name the location "Jarlshof," Norse for "Earl's Mansion." 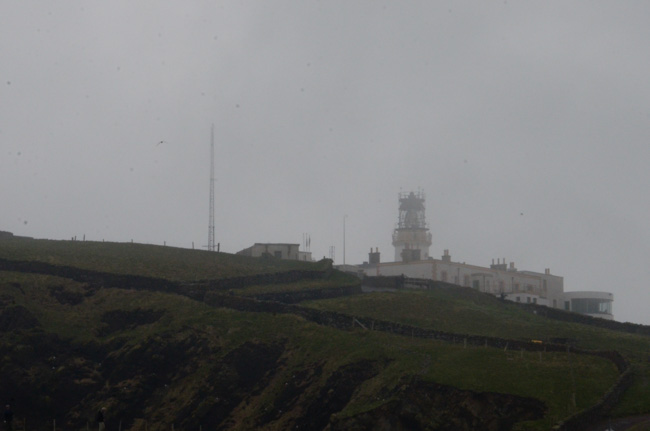 From Jarlshof we visited Sumburgh Head. Our guide was hoping we would see Puffins (we didn't), but I'm sorry I didn't take the opportunity to visit the lighthouse instead. This is another Robert Stevenson design, but it has been maintained and restored unlike those in Man, which have been allowed to deteriorate.

A group of Shetland musicians played during our evening docked in Lerwick. The session had not been previously arranged. One of the musicians saw the ship in port and approached a staff member about a concert. They were really good. One of the tunes they performed, Willafjord, is in my playlist. The YouTube version at the link is not on fiddle, but it captures the tune.

Since the trip I've added another Shetland tune from this session to my practice list (skip the ad at the link).