St Kilda lies in the North Atlantic to the west of the main archipelago of the Outer Hebrides. At one time it was inhabited by over 100 individuals, but the population declined in the early 20th century and the remainder petitioned to abandon the island as the local economy became unsustainable. They resettled elsewhere in Scotland in 1930 and few have returned – except to be buried in the island cemetery. There are several islands in the archipelago, but we visited only one: Hirta.

Feral sheep roam the island and it is home to a military radar station. Conservation specialists reside there in season.

St Kilda Wedding is a Scottish reel that I've now added to my practice list. 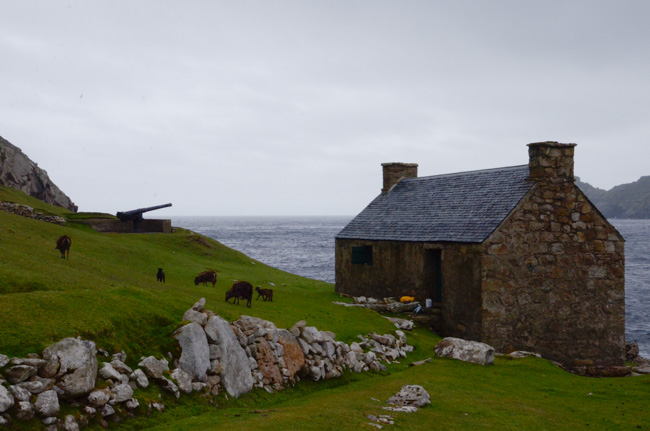 A German submarine shelled the village and signal station in WWI and the British army put in a gun emplacement but it never saw action.

"St Kilda" is properly written without a period. There is no known saint named Kilda so the "St" is not an abbreviation. There are several theories as to the source of the name. It was documented in the 16th century and may (or may not) be a corruption of an Old Norse (or Gaelic) name for the island. Or the freshwater spring that made it habitable. Or something else – no one is ever likely to know. 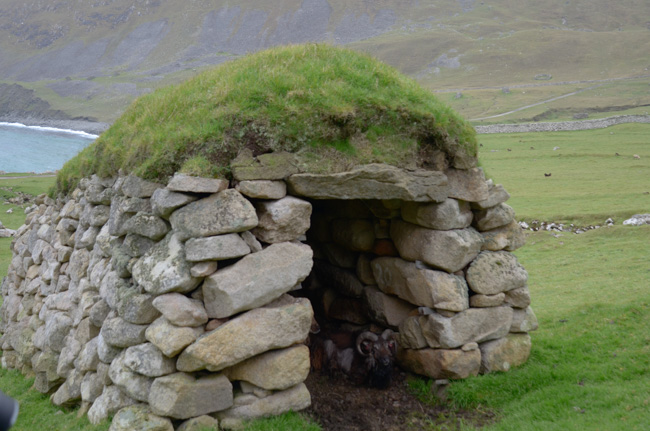 Enigmatic stone structures called cleits dot the hillsides. They provided shelter for the sheep and perhaps for shepherds caught out when nasty weather closed in. They were also used for storage. 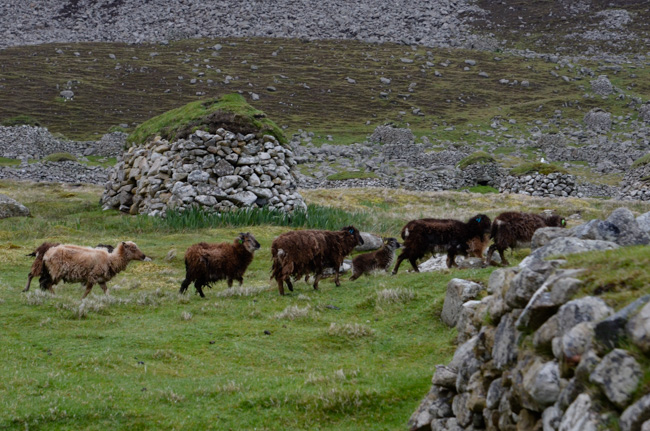 The sheep currently living on Hirta were brought from the neighboring island of Soay. Those wooly individuals living in the village area are the subjects of an extensive research project and have ear tags indicating their age and other identifying information. 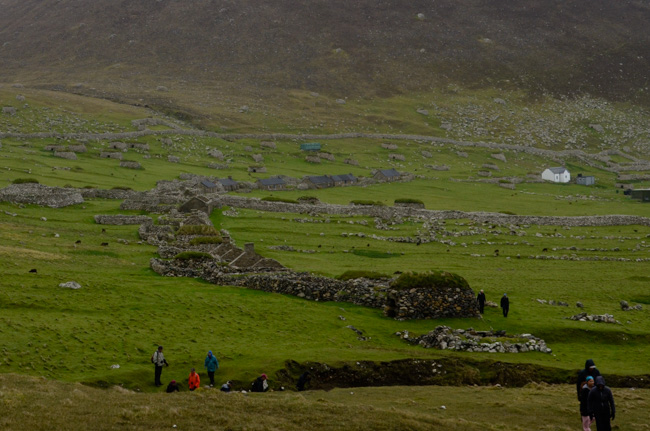 Although we had excellent weather for most of our trip, St Kilda was foggy & intermittently rainy with a fierce wind. The first "long walk" was cancelled due to the socked in high ground. "Plan B" was to walk to the saddle between the highest peaks and then come back to the village via another path.

We enthusiastically left the remains of the village behind. 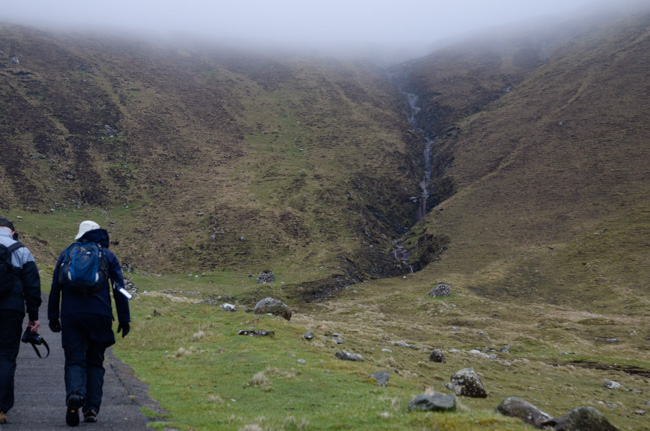 On our assent we followed a road that led to the modern radar installation. I was surprised at the amount of traffic along this road! The living quarters and offices were located near the village and the actual equipment was on the other side of the island. There was much communication between the two.

The climb was stiff in spots and I was glad to have occasional chances to stop and take a picture. I began to ponder the potential of hitching a ride with the military vehicles except that they were generally going too fast! 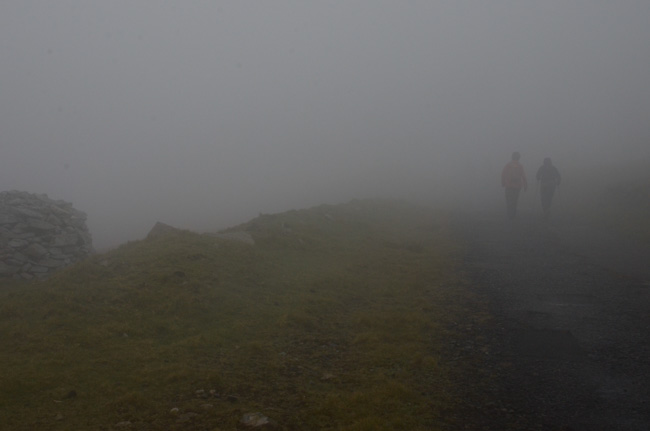 Before we reached the saddle we were well into the clouds. At this height the wind was fierce and walking difficult. Even the sheep avoided the area. 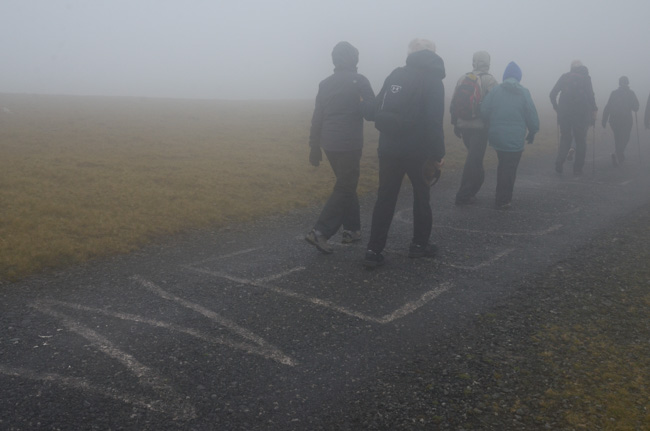 After reaching the saddle we had a pow-wow to discuss plans. Plan B, the hike down into the village via a rough path, was abandoned due to the winds. I think our guide was worried that hikers would either wander off in the fog or that we would get blown off one of the unseen steep cliffs.

We reluctantly agreed to return by the road. I was amused by a large "Welcome" painted on the tarmac. 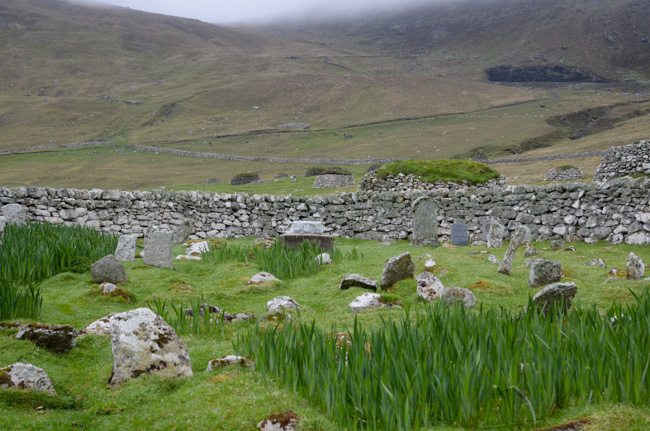 Once down from the clouds I had the opportunity to explore the remains of the village. The cemetery had graves from many generations – many marked only by uninscribed stones. The most recent grave I found was from 2010: the Irish wife of a man who had been born on Hirta in 1908. He was 22 when the island was abandoned. He died in 1978 and clearly wished to be buried here. His wife's tombstone reads "together again."

She was born in 1925 and had never lived on Hirta. 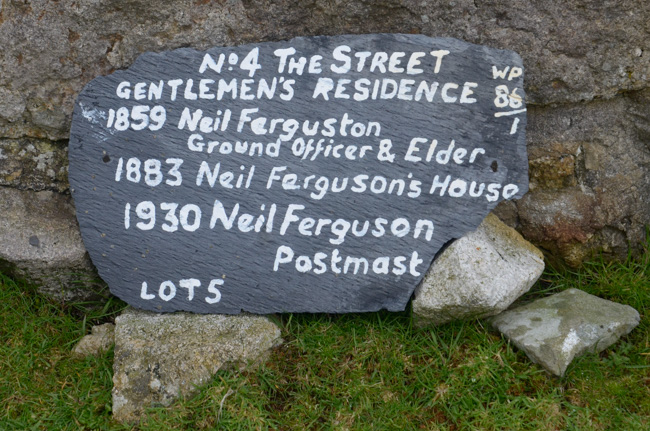 On 29 August 1930 all of the islanders and 1500 (give or take) sheep were evacuated. There have been books written on their experiences and one short article is worth checking out.

In 1930 the privately owned island was purchased as a bird sanctuary and in 1956 it was bequeathed to the National Trust of Scotland. 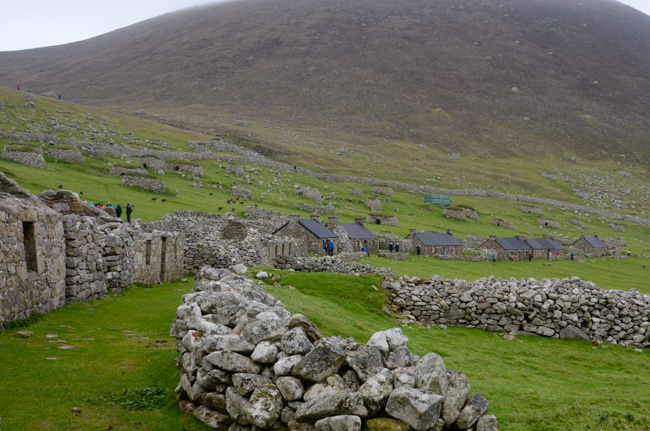 Several houses along the village street have been restored and are used as a museum, gift shop (naturally), and residences for the seasonal workers. The newer ruins face the "street" and date from the mid-1800s. Older ruins, called blackhouses, are located between the new ones

The Flannan Isles, which we passed on our journey from St Kilda to the Orkney Islands, are home to numerous seabird colonies. 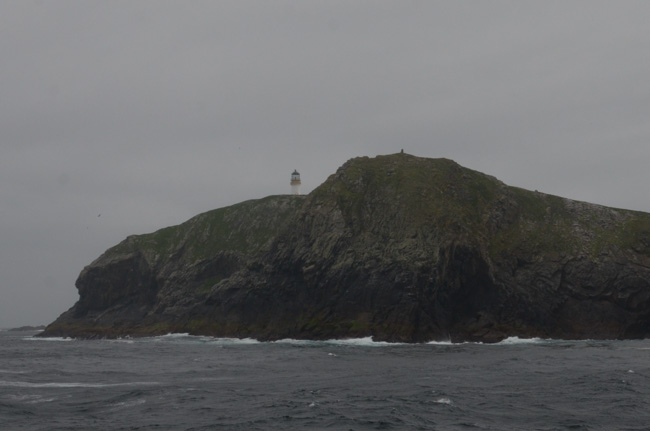 Now automated, the Flannan Lighthouse was the scene of a mysterious disappearance of the three lighthouse keepers in 1900. They vanished without a trace. Although there has been much speculation over the years of aliens and other supernatural causes, the most likely explanation is the violent weather and associated seas.

There was never any plan for us to attempt a landing. We were content to cruise offshore and watch the many birds.