We were eager to visit the Isle of Man, located in the Irish Sea between Ireland and England, but had never heard of the Calf of Man. This small island once had a community of shepherds and their families, but is noted nowadays for its bird observatory. It still has numerous sheep. 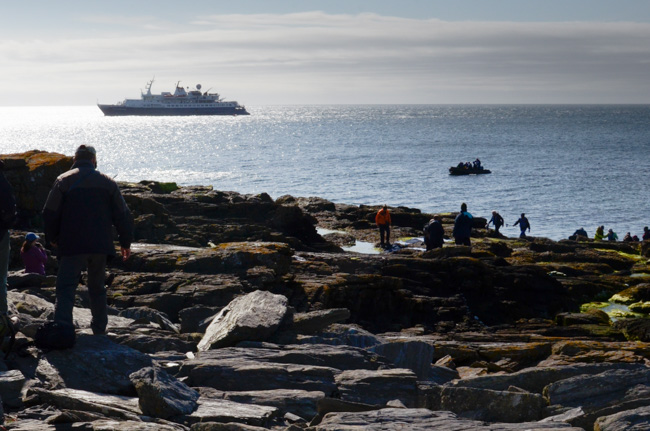 This was our first wettish landing from the Zodiacs. There was no pier, but there was no wading required. The rocks were slippery and treacherous so the ship's staff brought towels into service again to supply secure footing. They also positioned themselves at strategic locations to help us over the worst bits. 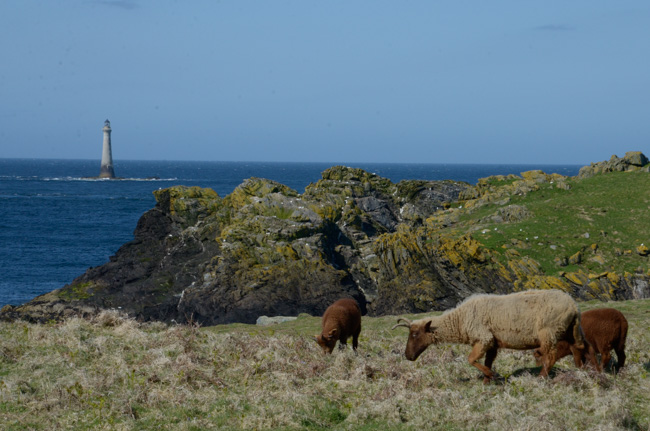 Manx Loaghtan sheep are a rare breed native to the islands. They are prized for both their meat and wool. The sheep have multiple horns, although the ewes' horns are small.

The lighthouse warns ships away from a dangerous shoal called Chicken Rock.

Lighthouses were built on the island in the early 19th century. Two were designed by Robert Stevenson, grandfather of the author Robert Louis Stevenson. Before the lighthouse was constructed on Chicken Rock, mariners could tell if they were approaching danger by the alignment of the two lights.

They were decommissioned in 1875 when the Chicken Rock light, also designed by members of the Stevenson family, was completed.

A modern, much less attractive, lighthouse dates from 1968. 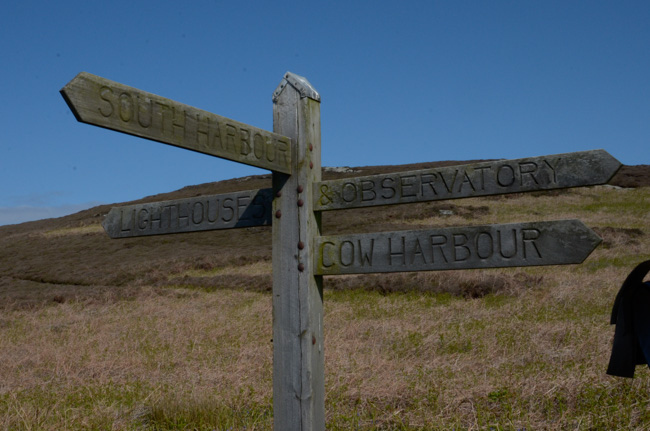 A far cry from the "corner of Walk and Don't Walk."

Our ship was located at South Harbour. Residents swam their cattle to the Isle of Man at Cow Harbour. 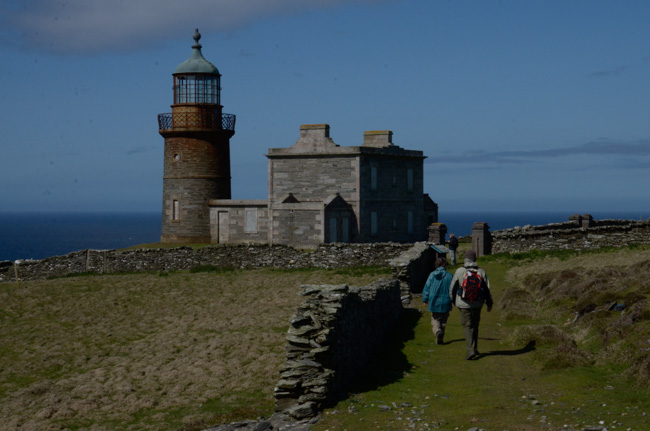 The lower light and keeper's residence is still handsome in spite of being abandoned almost 150 years. 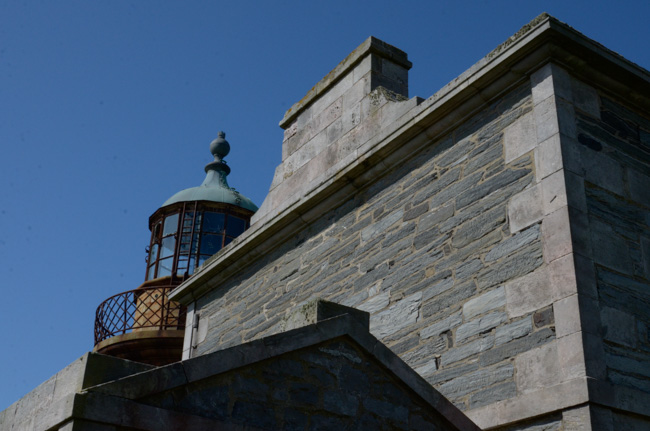 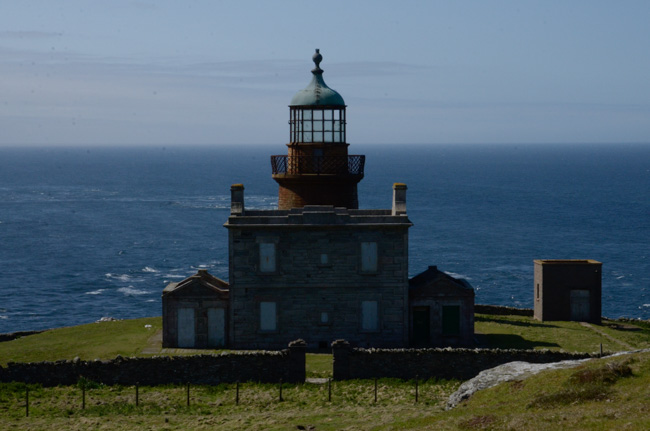 Standing at the upper light illustrates the effects of the aligned lights. Chicken Rock cannot be seen because it is hidden by the lower lighthouse.

It is a pity that these beautiful buildings have fallen into decay. 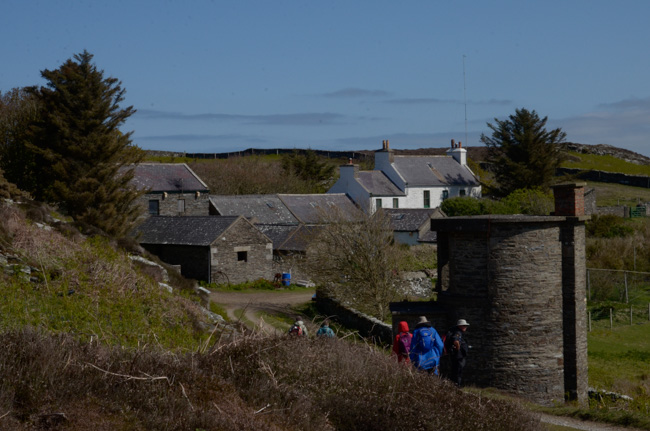 We hoped to see birds banded at the bird observatory, but the birds didn't oblige by visiting the traps. We had to be content with an explanation. The observatory is managed by the Manx Wildlife Trust.

Visitors can reserve overnight accommodation if there is space. You must bring your own food and sleeping bag. Potable water is also at a premium. One of our group asked about restrooms and the guide blushingly recommended finding an out-of-the way bush as the best option, although bushes are rare on this windswept island. 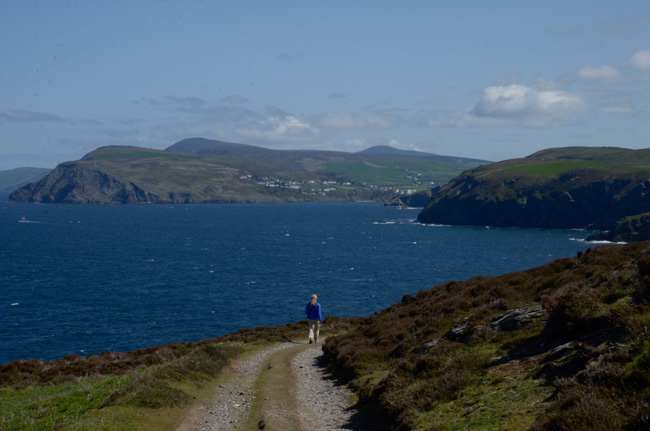 After the visit to the observatory, the long-walker group, continued our circumnavigation of the island. The "mainland" is in the distance. 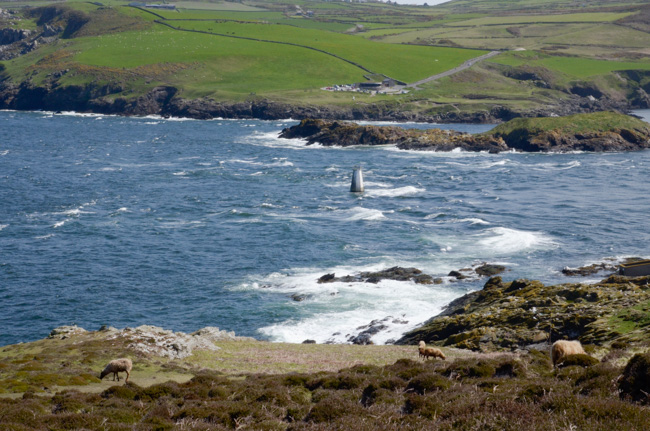 A narrow strait separates the two islands, but it looks formidable. The "cow harbour" is on this side of the island, although at a distance from the roughest water. I do not envy those cows. When sheep were transported between the islands, they were taken in boats. 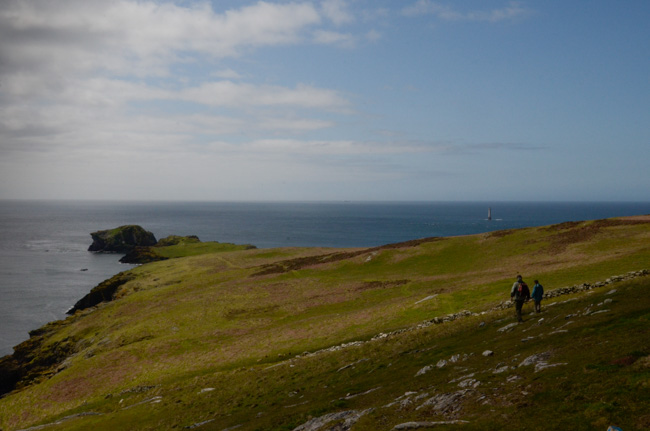 Tiny Zodiacs can be seen to the left of the rocky spit as we return to our pickup point. This visit was an unexpected and unique pleasure.