The following morning we had several possible expeditions:  touring the Waterford Crystal Factory, visiting Mt. Congreve gardens, and birding on Great Saltee Island. Jim decided to take a day off and stay on the ship; I chose the gardens, designed by the last private owner, Mr. Ambrose Congreve. Getting there was quite an adventure. The primary road to the garden was being repaired and seemed to be closed, but there were no detour signs. Our bus driver sought another route but was unsuccessful. When our local guide called the garden, her contact told us simply to wend our way through the road repairs. We arrived at the main gates to find them closed. After circumnavigating the garden in search of another entrance, the guide made another call to the garden staff. It turns out that the gates were set to open automatically when the bus approached. Success at last! 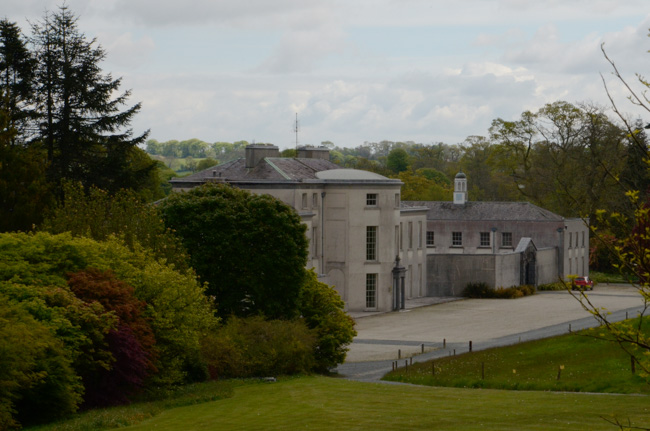 The Congreve family originated in England in the 14th century and the Anglo-Irish founder moved to Waterford in the 17th century. The manor house dates from the mid-18th century. Six generations of the family resided there until the last Mr. Congreve died childless at 104 and left the manor and gardens in trust to the Irish state. (A juicy factoid: Mr. Congreve shared a room at Eton with Ian Fleming!)

The house exterior was stark, but Mr. Congreve had lavishly furnished it and stocked it with artworks, all of which have been sold to benefit the trust.

My memory is hazy, but I think part of the manor is now used for offices and other parts are rented as residences.

We divided into several different groups for our tour and I was lucky to get in the group led by the head gardener. He was enthusiastic about the garden and its management plan for the future.

One of Mr. Congreve's design principles was mass plantings. Not one, not five, not ten, but scores of plants of the same type make a  unique visual impact.

The gardener explained another management principle. The garden is always being redesigned by natural processes. Older trees are allowed to die and fall rather than being cleaned out. When a large old tree falls it opens the canopy allowing other trees, shrubs and undergrowth to thrive. 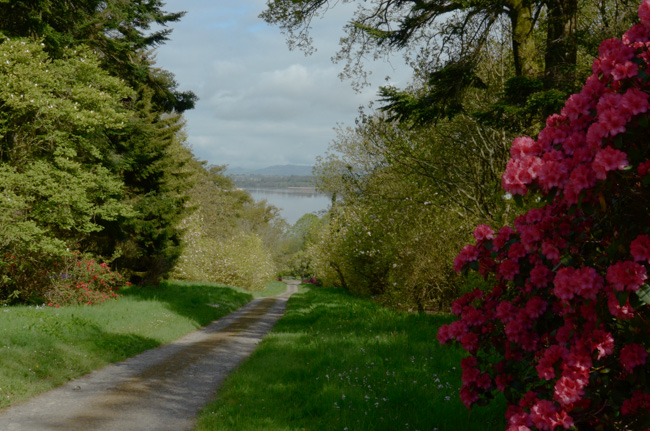 The estate is located on the banks of the River Suir (or Síur) and there are many views down to the river. We did not have time to take the river walk path through the garden. 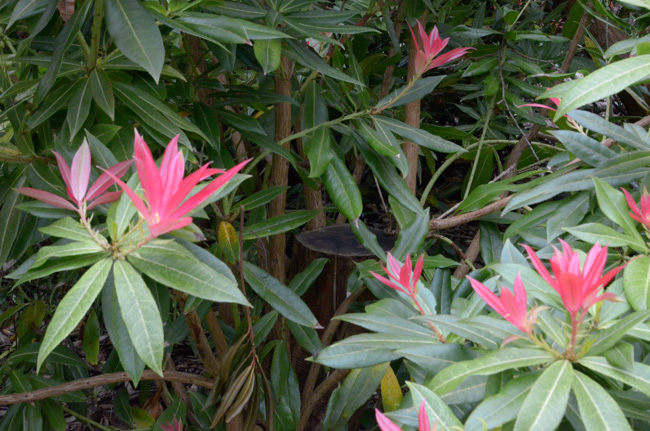 Another management technique is heavy pruning. We saw many shrubs that had once been lanky and overgrown and were now rejuvenated.

There were very many unusual cultivars. I can't tell because there were no labels, but flame azaleas are native to our part of the world. It was frustrating that few of the plants were labeled, but our guide said so many people stole the labels that they gave up replacing them. 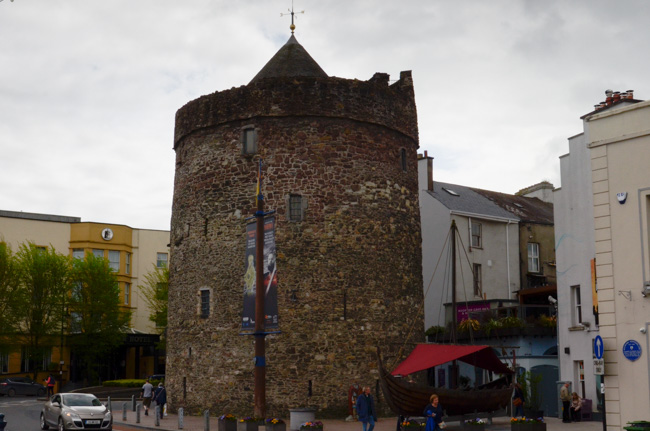 Most of the coastal areas of Ireland were first raided and then settled by the Vikings. Waterford is no exception. The name is from Old Norse, although there is no agreement on exactly what Vedrarfjiordr means. Founded in the 10th century, it may be the oldest area of continuous urban settlement in Ireland.

The oldest part of the city is called the "Viking Triangle" and is anchored by a tower originally built no later than the 11th century. The current structure is likely to be younger than that.

A reproduction Viking longboat is displayed in the area next to the tower. 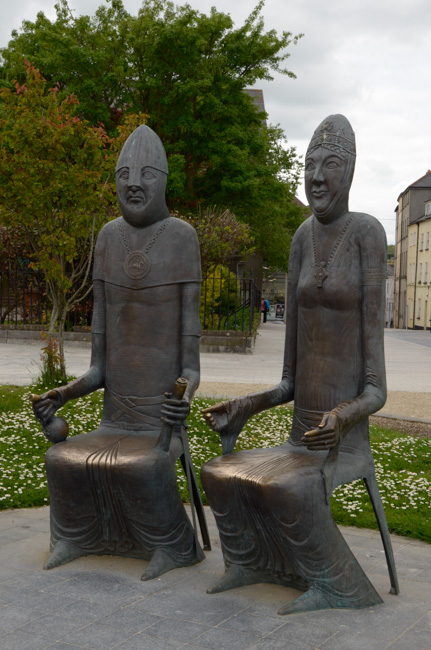 "Stongbow," Richard, the 2nd Earl of Pembroke, and Aoife (EE-fa), the daughter of Dermot MacMurrough, deposed King of Leinster, have quite a tale to tell. In the 12th century, Strongbow, a Norman lord, helped MacMurrough regain his throne in return for the hand of his daughter. This was the thin wedge that in time gave England dominion over Ireland. 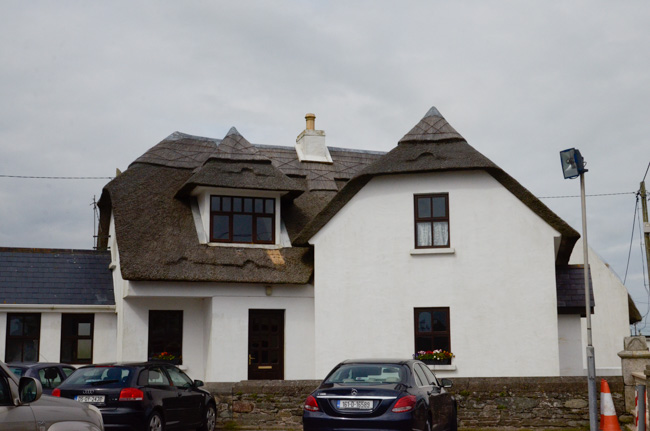 After a time in Waterford, we proceeded to Kilmore Quay. The ship had repositioned to this village during the morning so that the birders could take a local excursion to Great Saltee Island.

Kilmore Quay had an extensive collection of decorative thatched roofs. 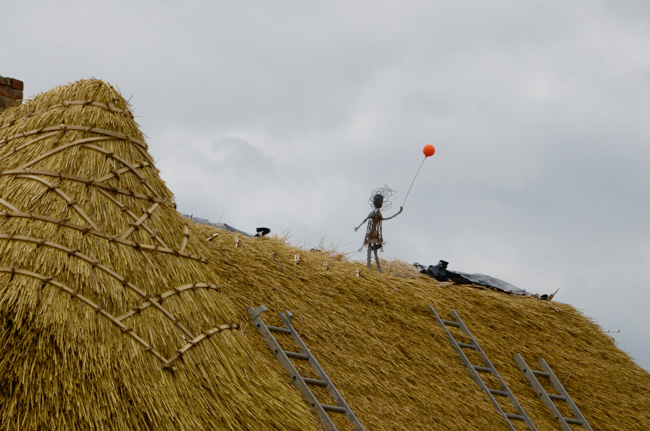 Some houses were being rethatched. The patterns were intricate and the thatchers had whimsical leanings as well. In addition to the "little girl" and her balloon this roof in progress featured a scarecrow. 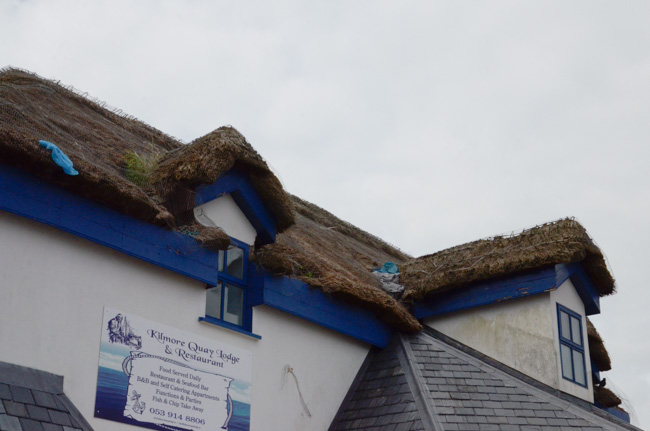 Thatch must be maintained. The owners of this former restaurant neglected their roof until it was little more than a rat's nest. In addition to the "For Sale" sign there was a notice requesting permission to replace the thatch with a slate roof. Perhaps not as charming -- but I always associate, rightly or wrongly, spiders and other small vermin with thatch. Who needs extra protein in their fish & chips?!

This was our last stop in the Republic of Ireland.