Overnight we crossed from Cornwall to Ireland. The only other time we had visited Ireland our excursions were limited to Dublin & Belfast. I hardly felt that counted.

We were supposed to visit Skellig Michael, an ancient monastery on a barren island off the southwest Irish coast. The landing sites had been damaged in a recent storm, however, and our permit was revoked. Plan B was to visit Ballinskelligs, the town that was the mainland point of contact until the monks abandoned the island after repeated Viking raids. "Ballinskelligs" derives from the Irish "Baile na Sceilge" meaning town of the Skelligs. It is one of the few Irish-speaking towns in the area. Our birder leader Jim, who is Irish, told me that there has been an Irish language requirement for some schools. Reading the information at the link makes it seem rather more complicated. 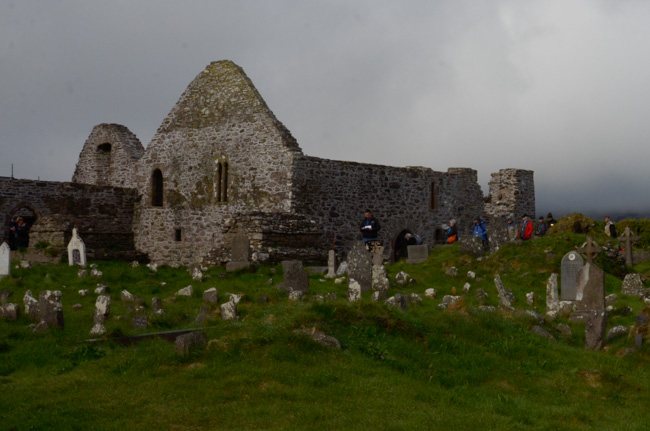 When the monks left their island retreat in the 12th century, they founded an Augustinian Priory and dedicated it to St. Michael. The remaining structures date from the 16th century. 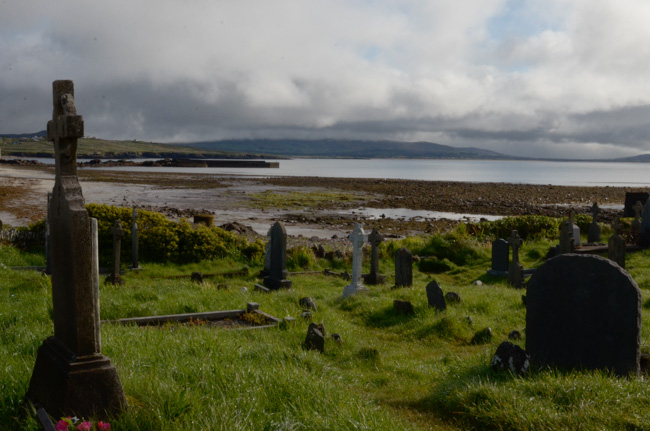 The abbey and graveyard lie on the shores of the bay.

There were numerous gravestones inscribed as O'Sullivan and none as Sullivan. My great-grandmother was a Sullivan, and I asked our guide about the difference.

He related a history based on "taking the soup." His version of the story was that during times of famine people were required to renounce the clan designation "O" or "Mac" in order to be fed. Other versions describe Protestant aid workers requiring Catholics to renounce their religion. Those who accepted the terms were said to take the soup. Possibly both of these abuses happened, but it seems that most names lost the designations when they were Anglicized, e.g., Ó Súilleabháin became either O'Sullivan or Sullivan depending on the preference either of the individual or whoever did the recording.

The general area of Ballinskeligs is the homeland of the O'Sullivans, so my Sullivan ancestor, who was Catholic, may have come from around here. Ancestry DNA indicates that I have a strong connection with the area. I haven't been able to determine when he left Ireland, but his daughter, my great-grandmother, was born in the USA by 1844 so it would have been prior to the great famine.

Although the first trans-Atlantic telegraph cable was laid in 1858, it quickly ceased functioning. By 1866 the first successful cable was established. A competitor company established a cable station in Ballinskeligs and was up & running by 1875. The guide made it a suspenseful story full of deep-sea cliff-hangers. At the end, the cable broke just off-shore and the townspeople formed a human chain to lift and repair it. There are some pictures on Pinterest that match the ones he showed us, but I can't link to them.

Most of the cable buildings have been demolished, but they were in this general area. 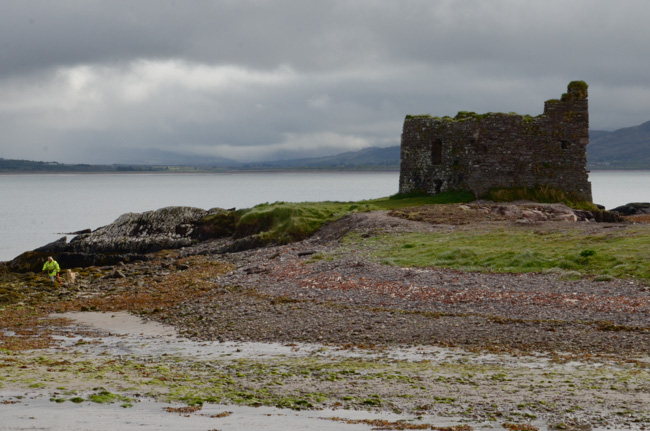 The ruins of this 16th century stronghold is known variously as Ballinskeligs Castle or the McCarthy Mór Tower. It stands on a spit of land reaching into the bay. 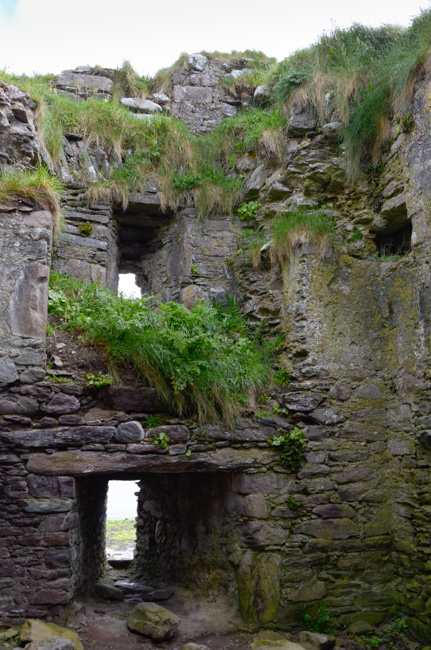 I seldom resist a ruin and this was no exception. Getting inside was a bit of a challenge, but it repaid the effort. 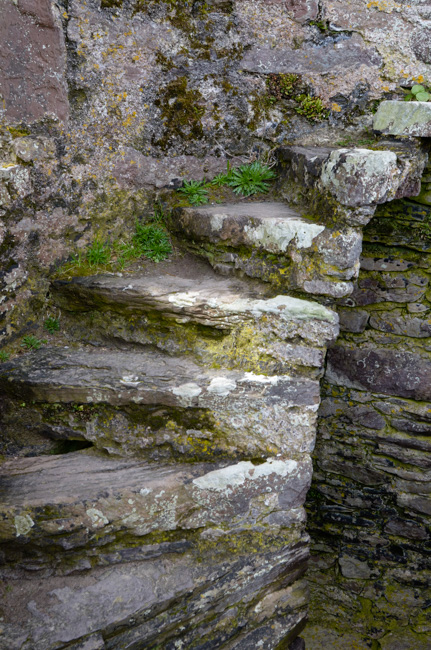 These spiral stairs led up to what had once been a second story. I don't recall whether I was rash enough to climb up. I hope not! 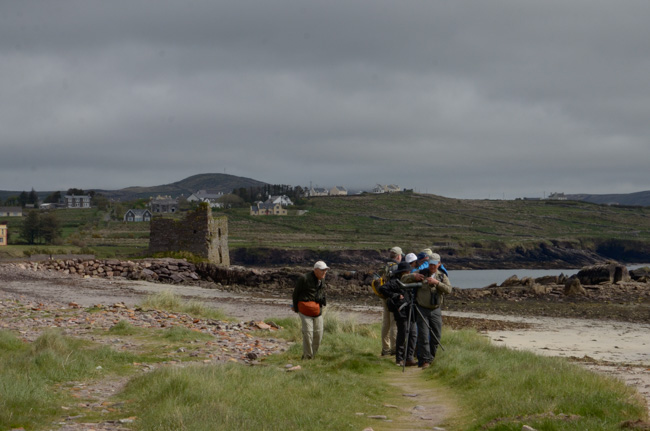 As I walked back to the landing, I passed this gaggle of birders who had found a plover's nest adjacent to the path. They were warning other people away -- for at least as long as it took for them to get pictures. 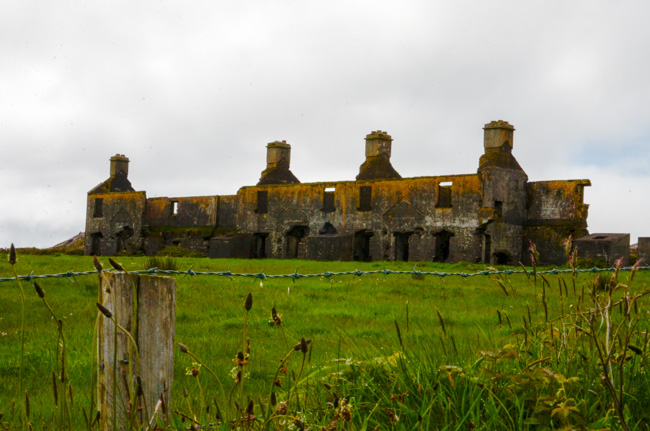 A ruined Coastguard station stands near our landing. They were established in the early 19th century in an attempt to stop smuggling and looting of shipwrecks. Stories of deliberately luring ships to their destruction, although persistent, have not been substantiated.

The station was burned by the IRA during the War of Independence in the early 20th century to prevent it being used as barracks by the English-aligned forces. 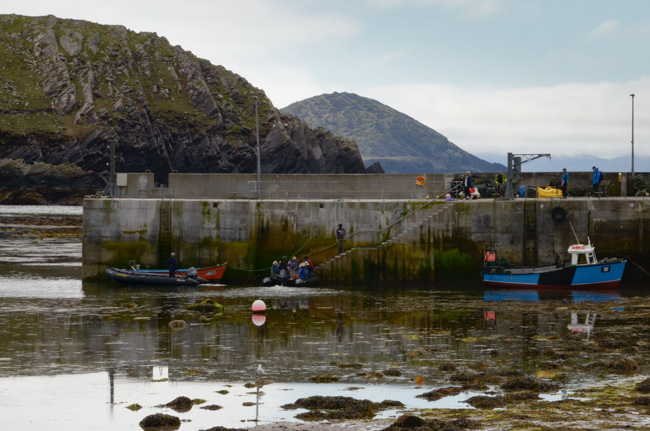 Our landing site was a "dry" landing, which meant we didn't have to wade to or from the Zodiacs. The moss and seaweed due to the high tides, however, made the stairs treacherous. At this and similar landings the staff used towels from the ship to cover the slippery bits. I'm sure the laundry staff were not amused! 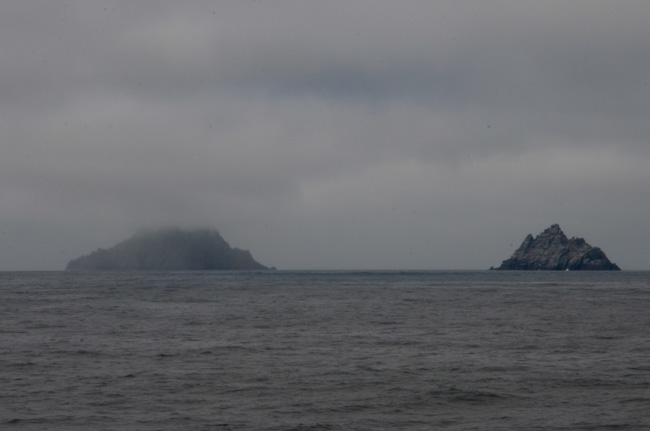 Even though we could not land, we cruised out to the skelligs to see what we could see. The larger Skellig Michael is on the left. Little Skellig, on the right, is an important bird breeding area and sanctuary. 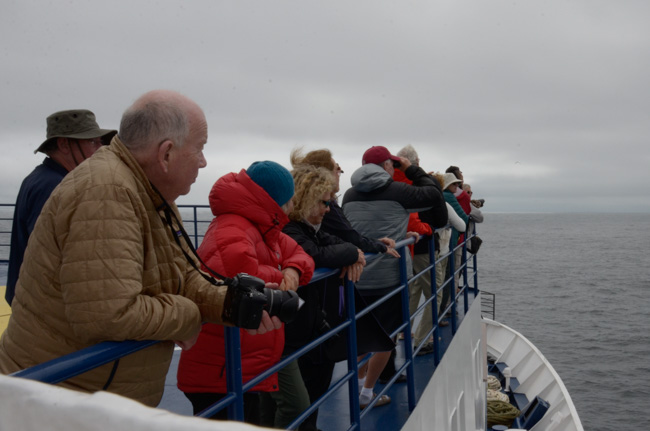 Most of our travelers defied the occasional chilly shower to see the birds and structures on the islands. 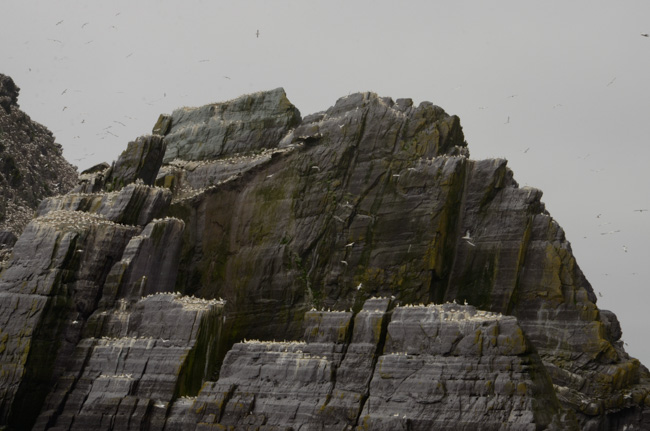 Sea birds, primarily northern gannets, occupy every possible ledge on Little Skellig. Their feeding strategy is to dive into the sea after fish. It was spectacular to watch when large numbers of birds would dive at once into a school of fish. 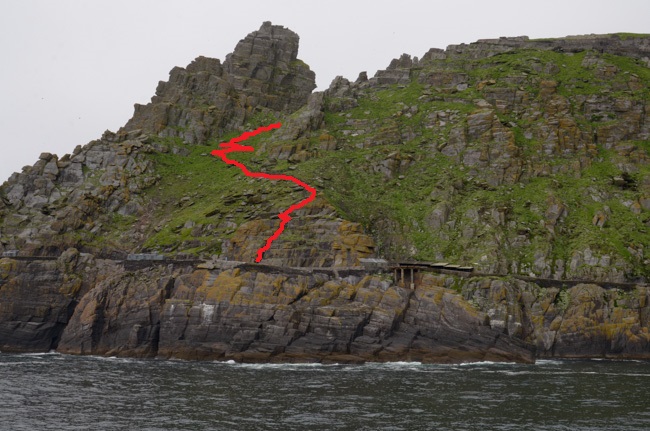 We were disappointed to lose our permit to land, but the prospect of climbing (and descending!) the 600+ uneven rock steps, with no handrails, would have been daunting. I've marked the route up the rock face in red. The actual landing site is even farther to the right. It was a hike to get to the stairs.

There was an alternate route up to the monastery, but it is even more precipitous and closed to the public.

The monastery is located high on the ridge. We could just see the walls and beehive-shaped dwellings. Close-ups may be seen at the link. 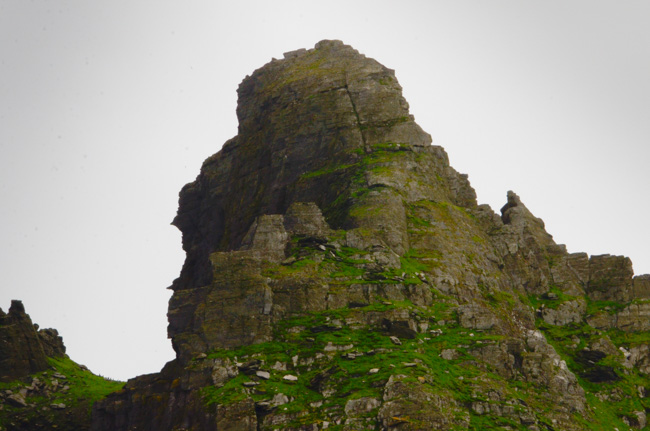 Although no one can be sure, historians believe that the monastery's maximum population was about 12. When the press of humanity at the main monastery became too distracting, a monk could retire to an even-more-isolated hermitage, the beehive structures just below the highest peak, for additional privacy and contemplation. 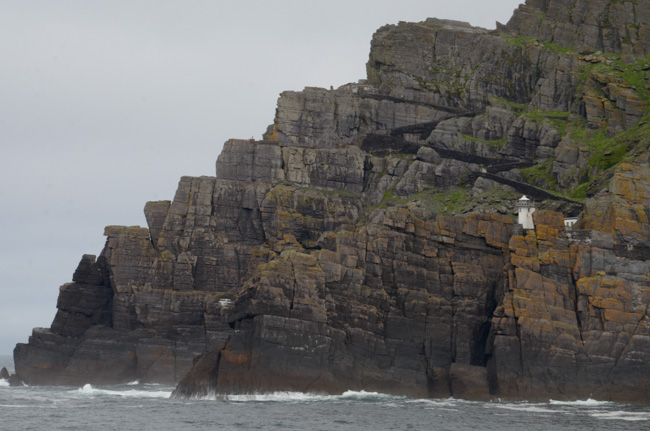 Lighthouses were planned for Skellig Michael beginning in 1821. Initially two were built, but the upper one has been demolished. The current fully automated light was completed in 1967 and converted to solar power in 2001.