How many people do you know who have been to the Isles of Scilly? I don't know any (or perhaps they just don't brag about it). This stop was one of the prime attractions of the trip for just that reason. 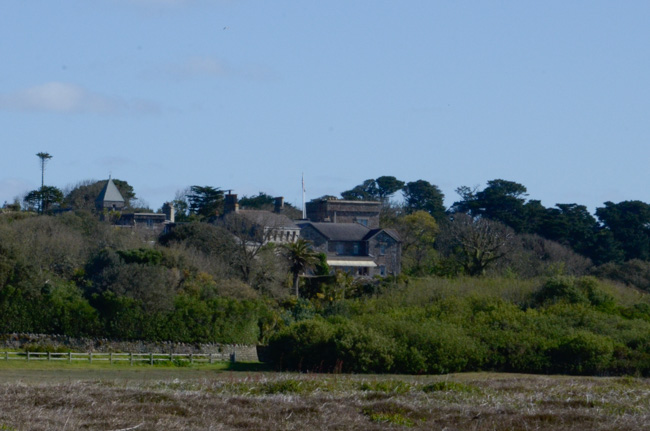 Shuttle vans were available to take folks from our Zodiac landing point in the south of Tresco Island to the Abbey Garden, which was the focus of our stop.

I chose to walk, however, and got separated from the group as a result. Not to worry; it was a fine walk -- even across the helipad, which is beyond the fence in this picture.

Birders are attracted to the islands because of the number of rare, or at least unexpected, species. The location far away from larger land masses gives resting spots to weary birds that may have been blown off course in their migrations. 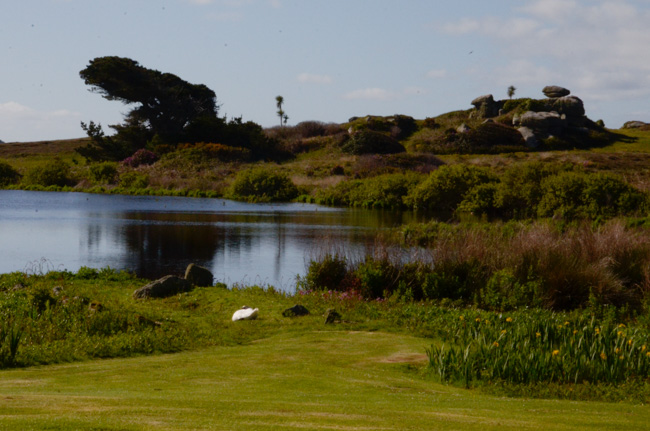 I found the birding group locating many different birds with their binoculars. I could only see the sleeping swans, but the view across the lake was lovely. They directed me toward the entrance to the garden. 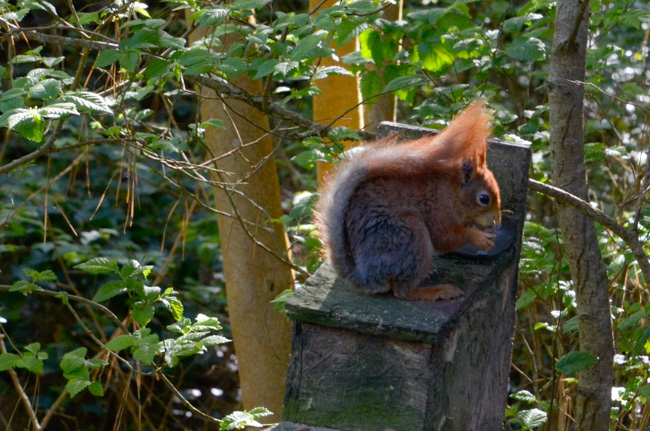 After finding my way into the garden, I met this red squirrel. They have become rare on the UK mainland due to competition with the introduced grey squirrel, so in 2013 a population was relocated to Tresco Island where they are protected. They seem to be thriving there.

There was controversy about protecting a species from an introduced species by introducing it elsewhere. Since much of the flora and fauna on Tresco is non-native, complaints seem nit-picking. The squirrels are not harming native species. 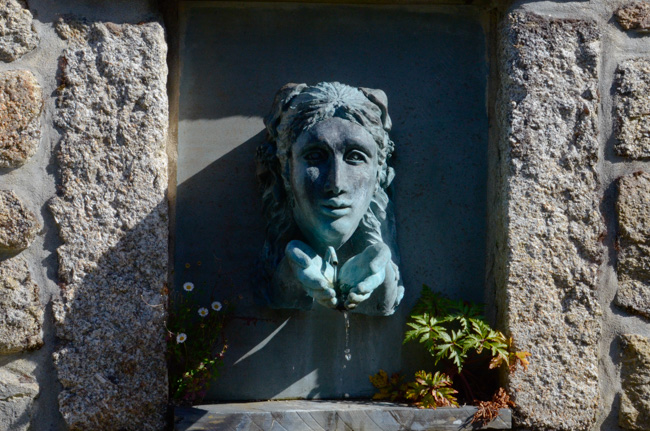 Whimsical sculptures and fountains highlight sections of the garden. 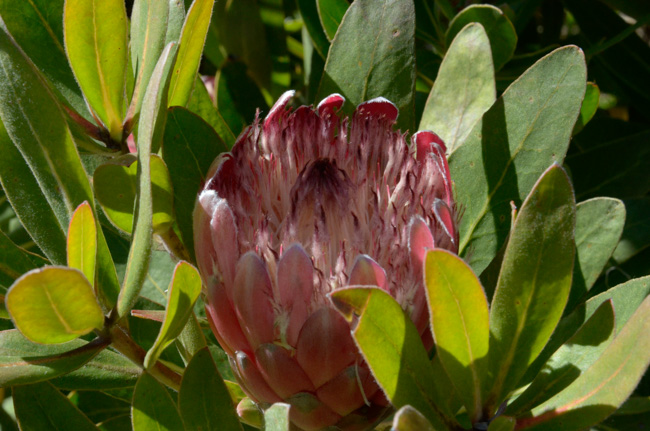 Terraces provide suitable habitat for diverse plants. The high terrace is dryer and cooler while the lowest terrace is the opposite.  There were many varieties of South African protea in the garden. I loved them all.

Because of the mild climate, cut flowers are a prominent industry in the islands. The bulk of the economy, however, is based on tourism. I would love to spend more time. 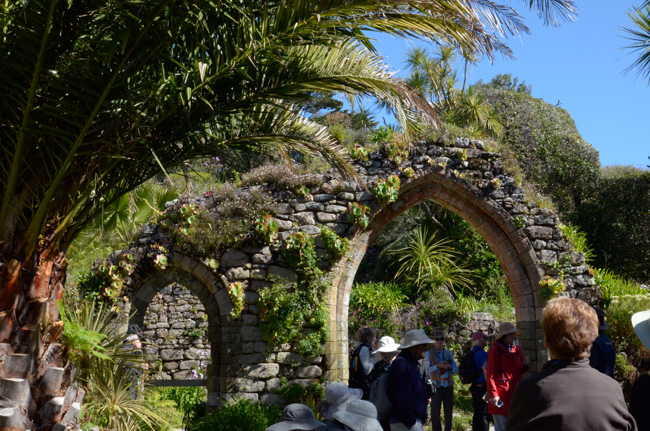 Although Tresco Priory dates from the 10th century, the extant ruins are from a much later date. 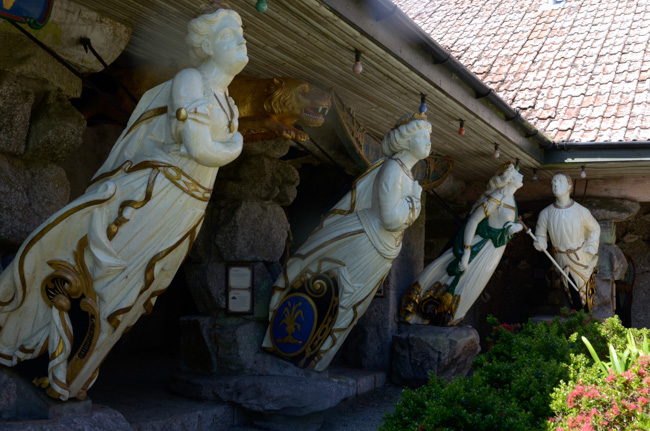 The Valhalla Museum houses a collection of figureheads and other identifying remains of ships that were wrecked near the islands. 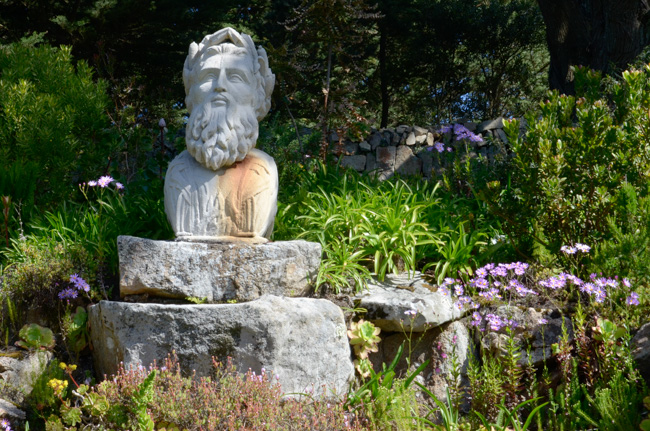 Father Neptune is at the top of a massive flight of steps. I don't recall if the sea is visible from this location (but I bet it is). 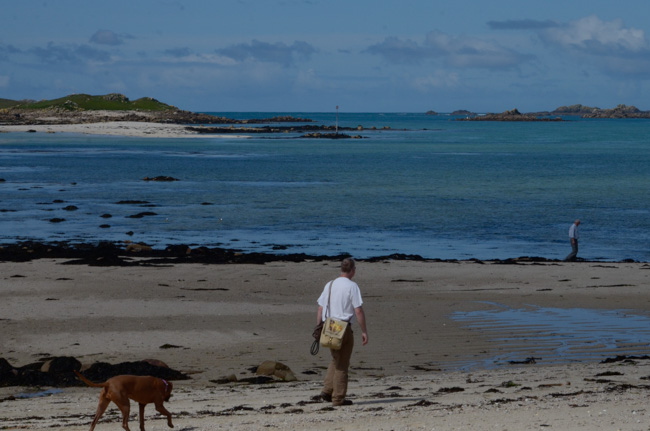 After visiting the garden, I chose to return to our embarkation point along the coast. The weather was glorious and I shared the beach with numerous beachcombers.

Scientists and historians believe that the Scillies were once a single island. The glaciers of the last ice age, which covered the north of England, were so heavy that they deformed the earth's crust. Scotland has been rising ever since the ice retreated and the southern parts of England, including these islands, have been sinking.

This phenomenon may have been the source for the legend of Lyonesse and other lost islands.