The following day started at Stonehenge. Jim had visited in the past, but I had not. The visitors' experience at this site has changed over the years. When he was there in the mid-70s, Jim walked amid the stones and touched them. In later years, authorities sequestered the stones behind distracting fences. Nowadays, the monument is protected, but without disruptive visual barriers. An intrusive road that once ran through the area and encroached on some of the features has also been removed.

This was our introduction to the "ancient" part of the program. Stonehenge is much more ancient than the Druids, who may or may not have made use of it. We only had enough time to view a fraction of the entire site.

After our time at Stonehenge, we traveled to Salisbury to visit the cathedral there. 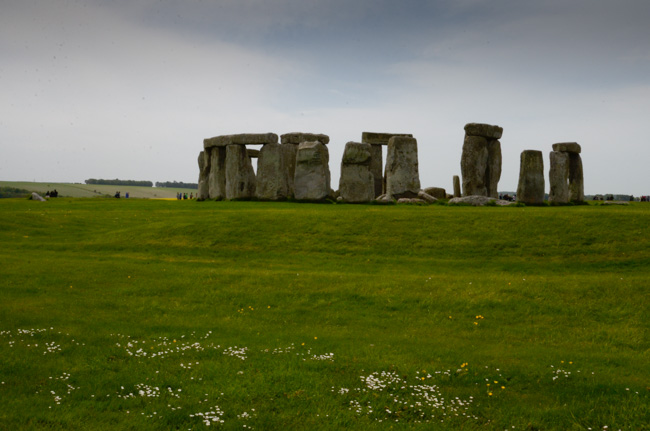 Visitors now approach the monument as ancient people may have done.

This was not the original feature at this site. The Stonehenge Cursus is an earlier neolithic feature.

Archaeologists believe the ditch and bank, or henge, was constructed well before the stones were added. 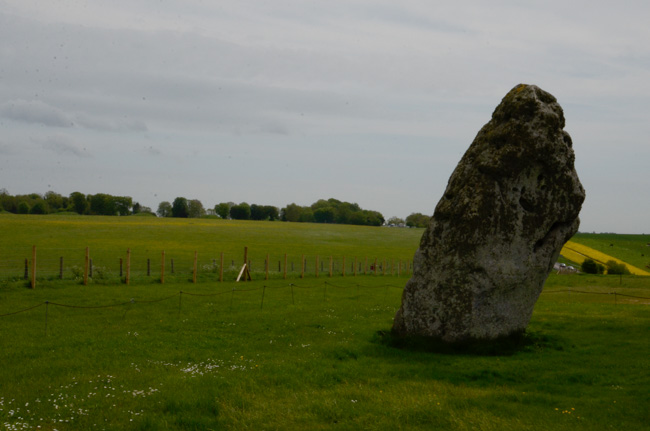 The heelstone marks sunrise on the summer solstice and sunset on the Winter Solstice. It may have been a natural feature and might have prompted the initial selection of the site. ("May" and "might" feature prominently in any archeological explanation.)

The original entrance to the monument was near here. The stones on this side are more carefully shaped and smoothed.

The winter solstice was more important to ancient peoples because it confirmed that the darkness had reached its maximum and the sun would soon be bringing more light and warmth. Nowadays more people celebrate mid-summer. The weather is better. 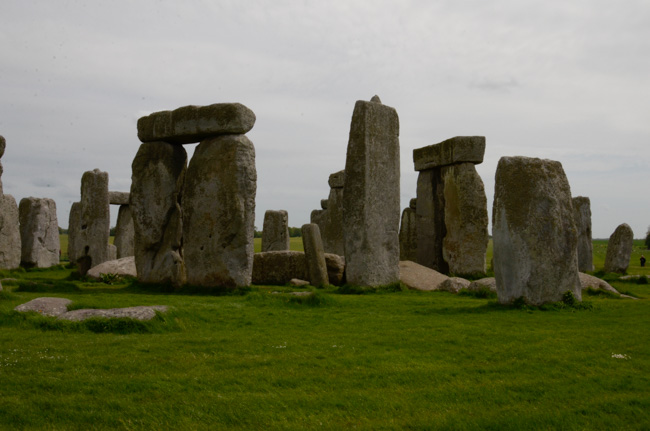 Opposite the supposed entrance, many stones have fallen and many are missing. At one time some researchers maintained that Stonehenge had never been completed, but drought conditions indicated traces of missing stones showing they were once present.

The ancient builders fashioned the trilithons, most of which have now fallen, such that the lintels fitted onto the uprights with mortise & tenon joints and to each other with dovetail joints. 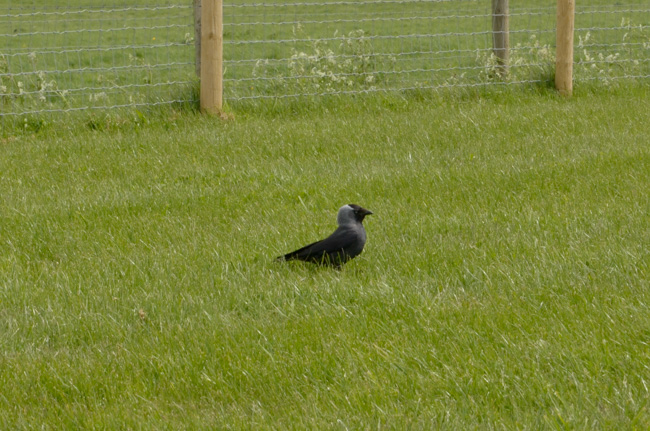 I can't hold a candle to the birders in our group, but I did get some pictures of British birds. This is a jackdaw -- a member of the crow family. Stonehenge birds were quite tame. One begging for treats perched on the hand of a tourist. 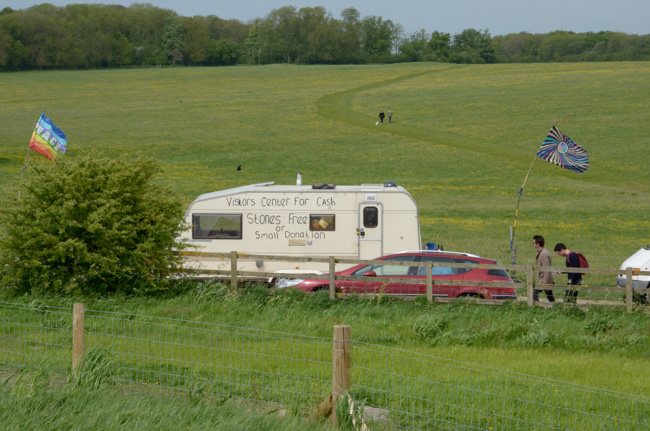 A small protest encampment near the shuttle stop had signs: "Gifted to the nation 26th October 1918" and "Sorry for English Heritage Rip-off" among others. They believe that access to the stones should be free. They don't appear to consider ongoing maintenance and interpretation costs. 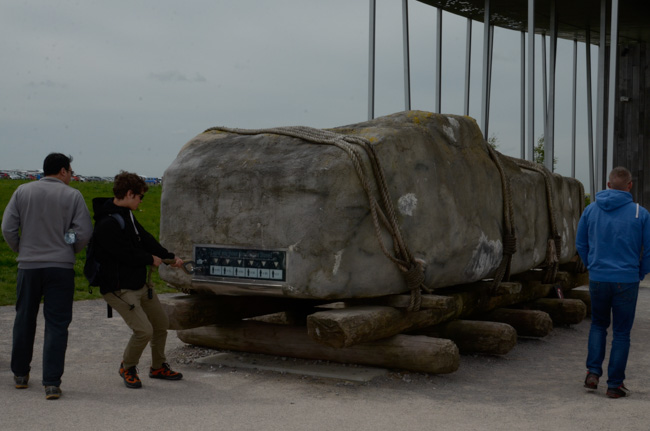 The Visitors' Centre included this replica of one of the stones. It weighs roughly 28 tonnes. The scale on the stone runs from 80 to 99 people needed to propel it along the rollers.

Check this link to an Earth magazine article to learn more about the various stones, where they came from, and how and when they may have been transported to this site. Why? That's a story that no one has told. 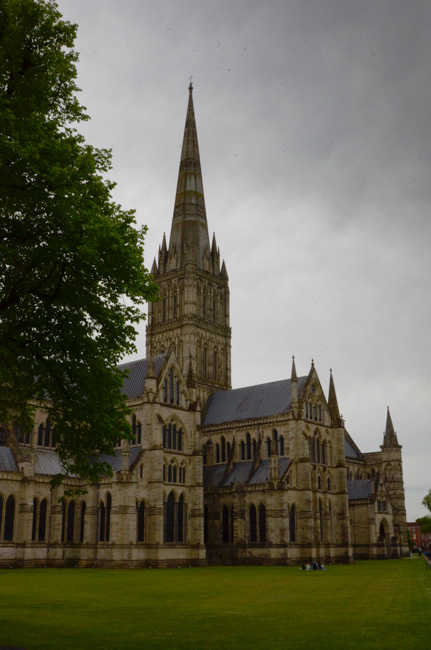 Salisbury is a short distance from Stonehenge. The original settlement of Old Sarum was about 3km away, but political conflicts caused the city and cathedral to be relocated to its current position in the 13th century. At that time, and into the 21st century, the official name of the city was New Sarum. Much more info is at the link.

Unlike most such structures, the cathedral has not collapsed over the years or been extensively modified as tastes have changed. Additional interior bracing has been added to support the weight of the spire, but it is inconspicuous.

We saw the best preserved of the original copies of the Magna Carta on display here. 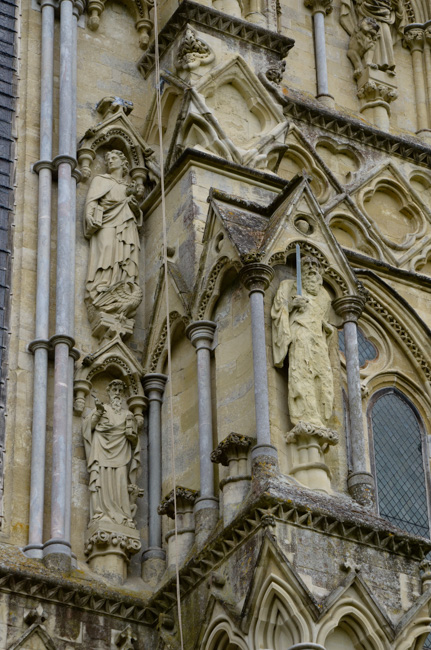 Although in London we saw Westminster Palace clad in scaffolding, the scaffolding here had recently been removed after extensive restoration.

The statues illustrate former deterioration (on the right) and new carvings (on the left). I expect the statues that were replaced were in even worse condition than the one that remains. 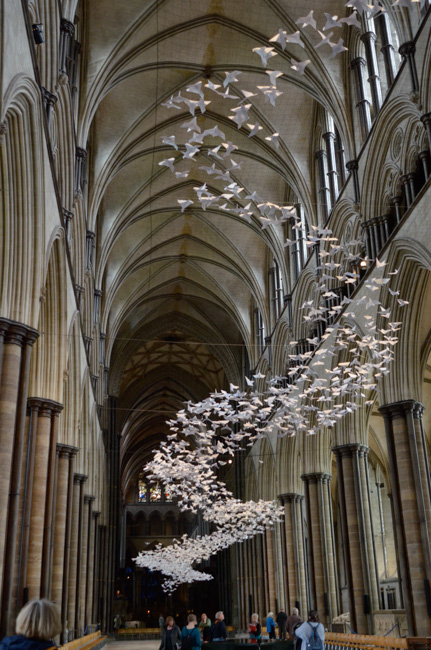 The interior of the cathedral is beautiful, but I was also fascinated by the world's oldest working clock, which may have been constructed in the 14th century (or not).

In March, former Russian spy Sergei Skripal and his daughter Yulia were poisoned in a nerve gas attack. Mr. Skripal was released from the hospital shortly after our visit. He and his daughter continue to recover. Salisbury experienced a drop in tourism and other business after the attack due to fears of lingering poison.

As we visited the cathedral, the artist Michael Pendry was completing an installation of thousands of origami doves to signify peace and freedom. The local installation was organized in response to the attack. 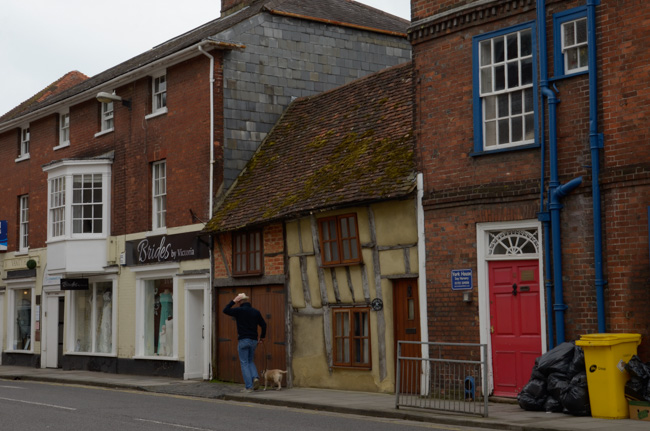 As we walked back to meet our bus we passed buildings of many different centuries. The "Old Forge" building looks like a drunken sailor being supported on either side by his buddies. The owners of the building to the right have decided to flaunt rather than mask the retrofitted plumbing.

I had hoped to see the College of Matrons established in the 17th century by Bishop Seth Ward. Our guide said that he had loved a woman who chose to marry another clergyman. When she was left a penniless widow, he established the charity and commissioned the residence. She was one of the beneficiaries. It is a touching story

At least some genealogists believe that my Ward ancestry traces back to a relative of Seth Ward who immigrated to Virginia in the 17th century. My own research takes me back to a Ward who was in Maryland in the 18th century, so there could be a possible link, but I doubt it. 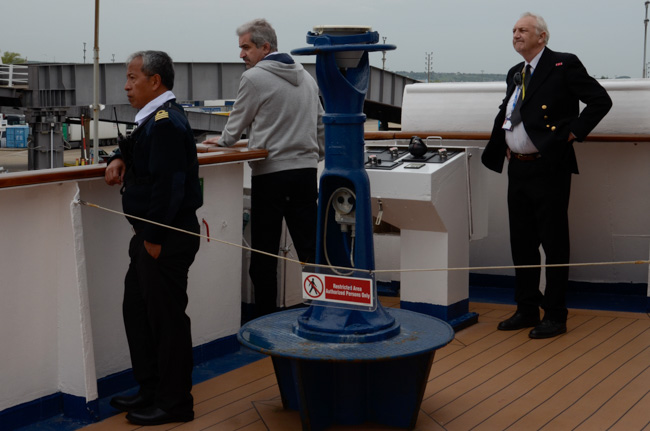 After visiting Salisbury we met our ship in Portsmouth. It had come from Portugal and several of our companions participated in that cruise as well.  We met them at lunch in Salisbury because they had to leave the ship while it was cleaned and provisioned for the next two weeks.

It's always fun to watch a ship leave its dock and proceed through the harbor. 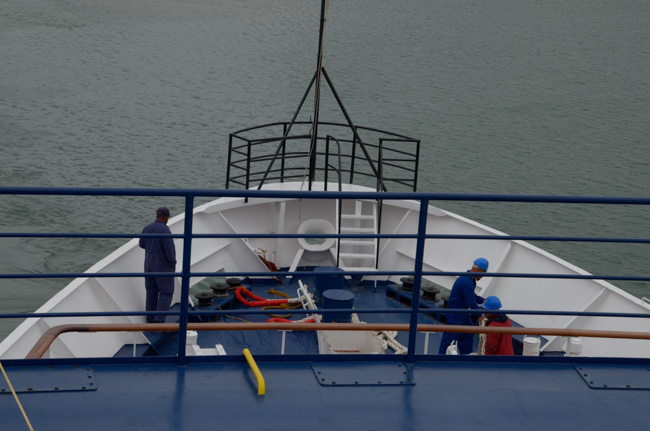 The crew quickly got everything shipshape and Bristol fashion for our departure. 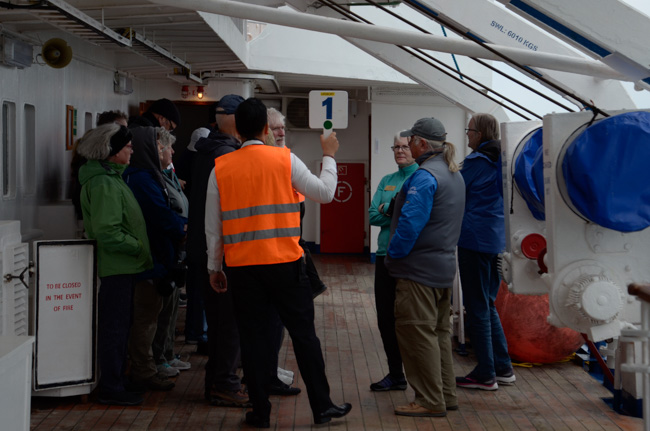 Shortly thereafter we had the mandatory lifeboat drill. Unlike every other ship we have traveled on, this one does not supply life-vests in the stateroom. The crew said we would get them issued to us in case of emergency.

Another reason we will avoid this ship in the future.

Nevertheless we were off on our adventure (and we never needed life-vests)!