Our tour started in London. The tour operator, Zegrahm Expeditions, supplied vouchers for the express train from Heathrow to Paddington Station. We spent our first night at the adjacent Paddington Hilton. Our rooms weren't ready when we arrived mid-morning, so that took care of any temptation we might have had to check in and snooze. Jim had visited the observatory at Greenwich years ago, but it has been a long-deferred dream of mine. Here was my chance! 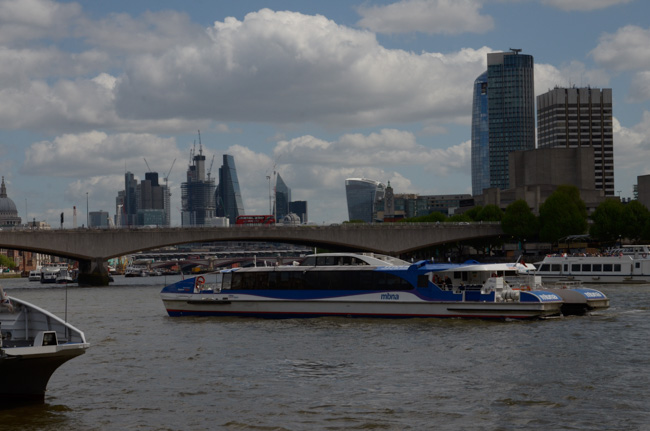 The hotel staff gave us several options to get to Greenwich: cab, subway or "river bus."

We opted for our favorite "multi-modal" transport: subway to the Thames Clipper, Shanks mare up the hill to the observatory, and back again on foot, river & subway before meeting our fellow travelers for an afternoon reception and dinner.

My first-time-ever ride on the London "tube" was enhanced by the failure of the electronic ticketing system. It's not just DC that has such problems! The "bus service" featured spacious catamarans with concessions and an open deck in the rear. There were several routes. Ours was the RB1, which runs in a continuous loop from North Greenwich to the London Eye. 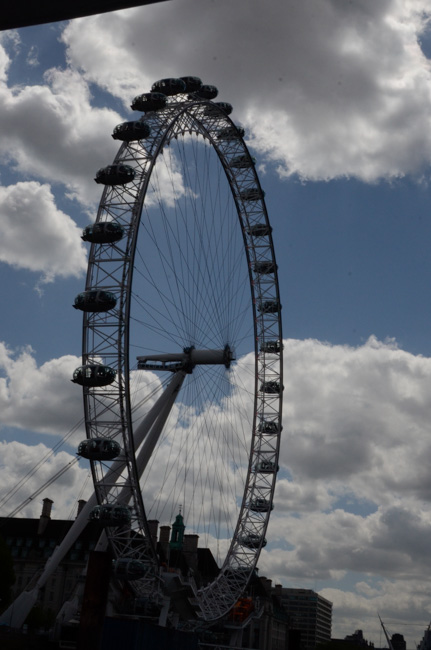 The Eye is a cantilevered design that doesn't look like it could stand. Once the largest of its kind, it bears little resemblance to the county fair Ferris wheel. 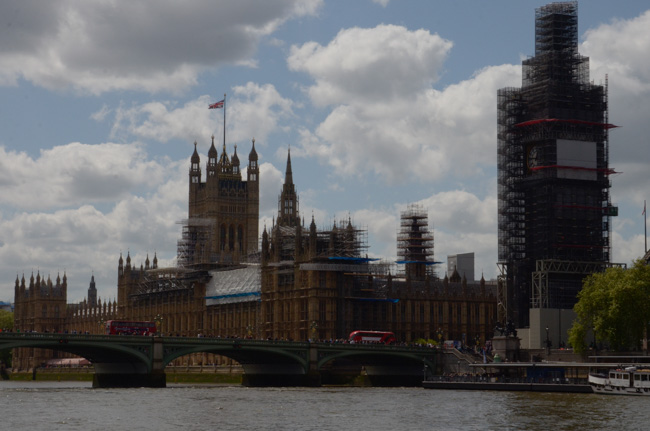 Westminster Palace and Big Ben were covered in scaffolding as part of a major renovation.

Another famous river sight is the Tower Bridge, built in the late 19th century.

The modern London Bridge was a fine bridge, but not photogenic. 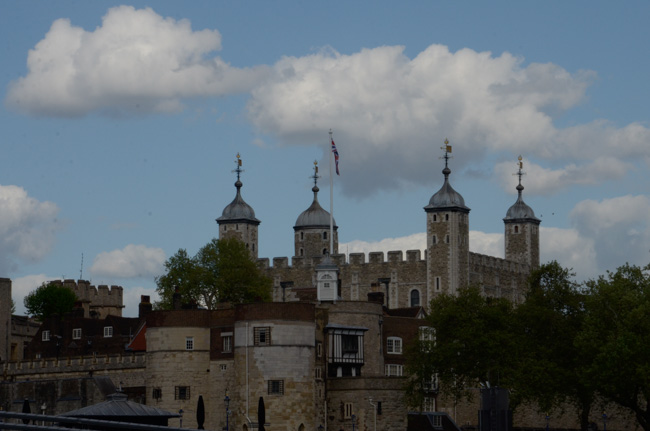 The Tower of London is also accessed via the river. Traitor's Gate, now bricked up, is still visible. 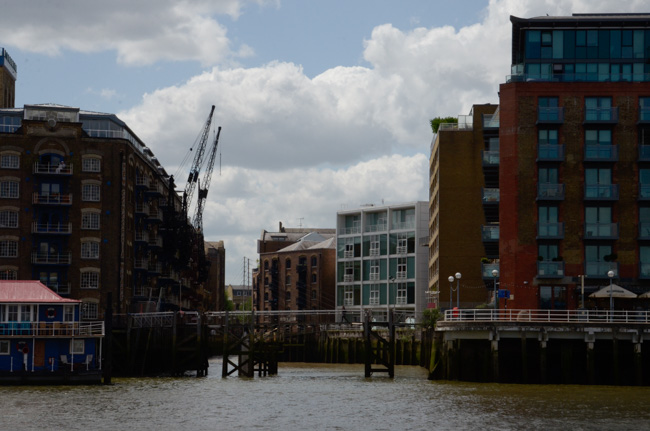 We passed several canal entrances. I wasn't aware that London is full of urban canals. Although we seldom enjoy cities, this suggests something to do rather than plodding though the numerous and crowded touristy sights should we ever spend time in London. 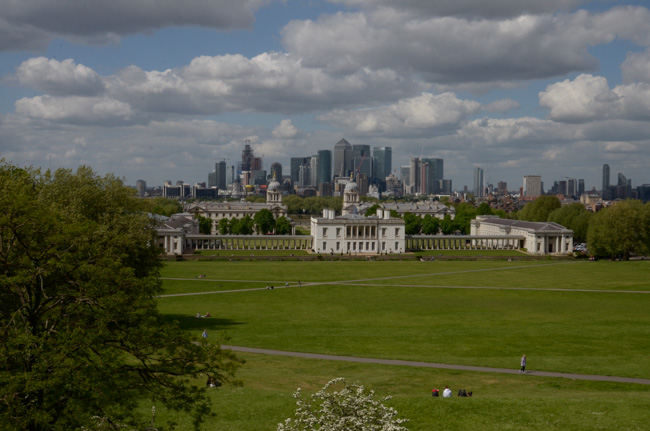 The Royal Observatory at Greenwich overlooks an extensive park, the Queen's House palace, constructed by Inigo Jones, and the Greenwich Hospital, designed by Christopher Wren, now the Old Royal Naval College. We didn't have time to visit these other important sites, but made a beeline, after lunch and a pint at the visitors' center that is, for the observatory. 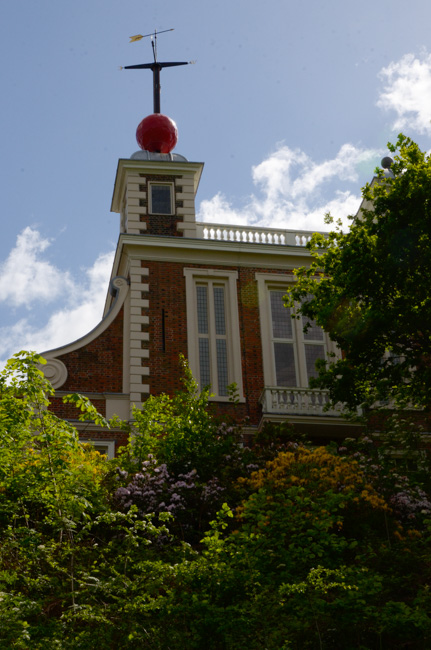 The Royal Observatory at Greenwich dates from the 17th century.

The prime meridian, which defines longitude zero, is an arbitrary designation. Edmund Halley, the second Astronomer Royal, made the first determination of the Greenwich meridian, which has been used by England since the 18th century. Better instrumentation has changed its location slightly. The Greenwich meridian became the international standard in the 19th century.

The determination of latitude, the distance from the equator, is straightforward compared to the determination of longitude. The article at the link gives the technical details but only hints at the politics, classism, professional jealousy and general skull-duggery behind the scenes.

The astronomers at Greenwich also developed a reference point for time-keeping: Greenwich Mean Time. Since knowing the correct time is critical for navigators, the red ball at the top of the observatory, visible to all ships on the river, was and is dropped daily at 1pm. Ironically, the ball drop adheres to British Summer Time. 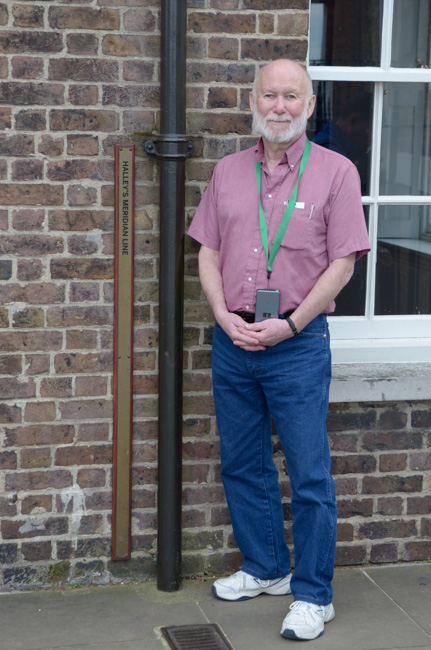 As noted above, the location of the meridian has changed over the years with improved instrumentation. Jim is standing at Halley's original Meridian. 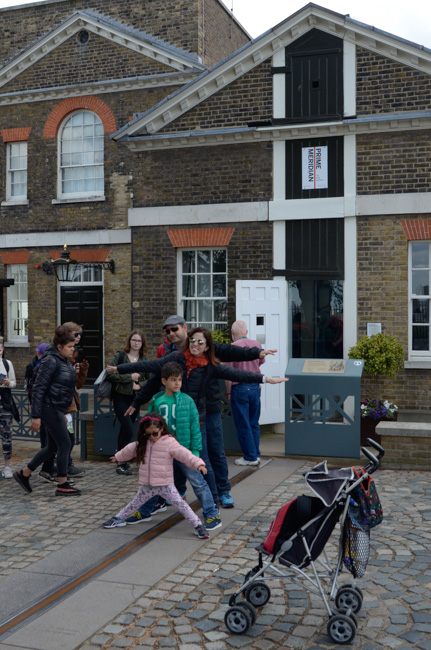 The nearby modern longitude zero is a much more popular photo-op. 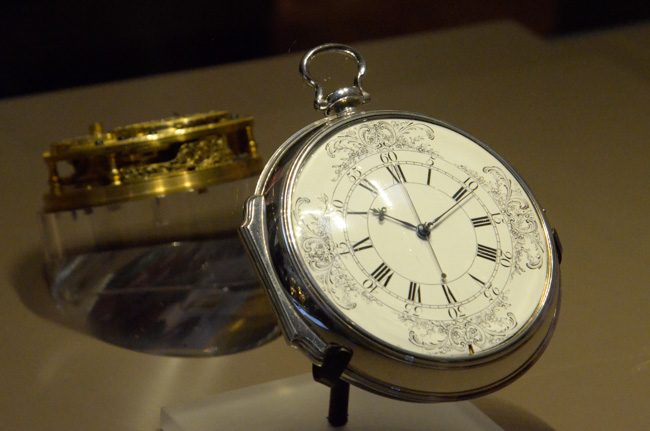 John Harrison designed and constructed the first successful marine chronometer, called the H4, in 1759. (The signed and dated movement is in the background.) It passed all the tests established for the award of the Longitude Prize, but Harrison only received a portion of the designated money. In order to get even that much he had to petition King George III, who in turn lambasted Parliament to recognize the achievement. Harrison did receive partial payment shortly before he died.

There were several early timepieces on display in the museum 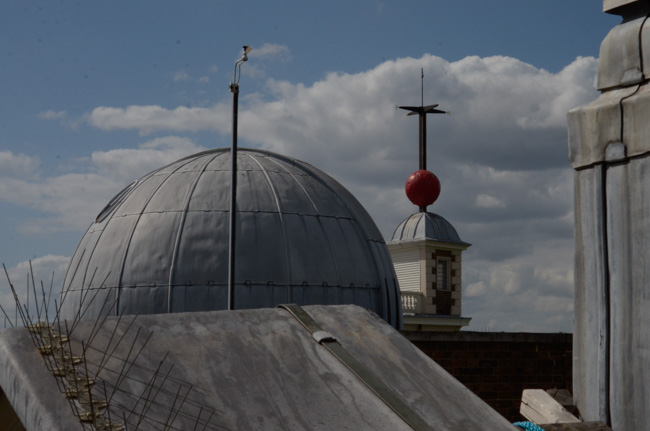 There are several historic observatories and telescopes located at Greenwich. 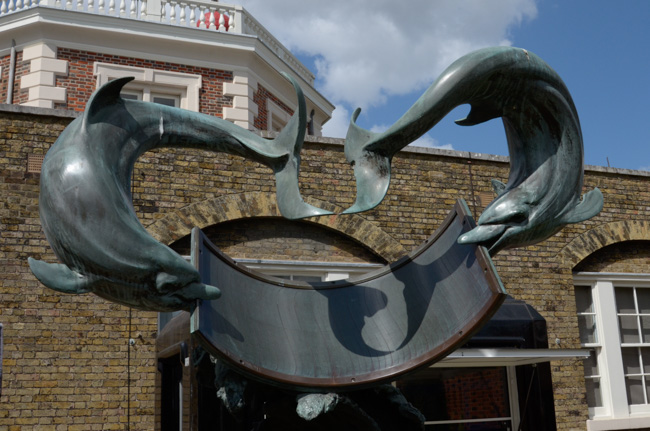