We were up bright & early the next morning for our drive to Mexico City -- the final stop on our tour.

We didn't have enough time there but to scratch the surface of this enormous city. (Although we were told many times that Mexico City is the second largest city in the world, I have been unable to verify that. Let's just say it's in the top ten.) 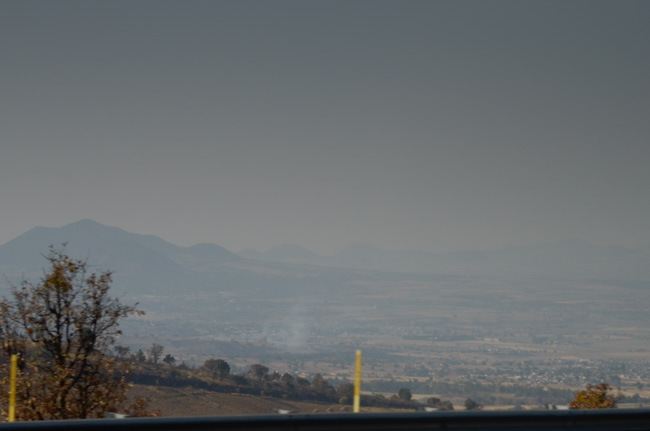 Our travels took us over mountains with lush forests. As we descended into the Valley of Mexico, we could see the haze that the area is famous for. The topography, altitude, and prevailing winds cause significant air pollution in the valley. 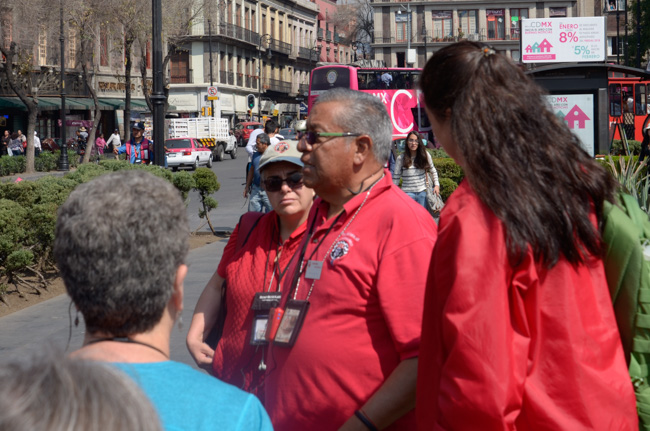 Our bus took us down to the cathedral square where we met our local guide, Francisco Barrios. He was very knowledgeable and funny to boot.

Beatriz, Paco and Haydee are all sporting their Geronimo Educational Travel logos. 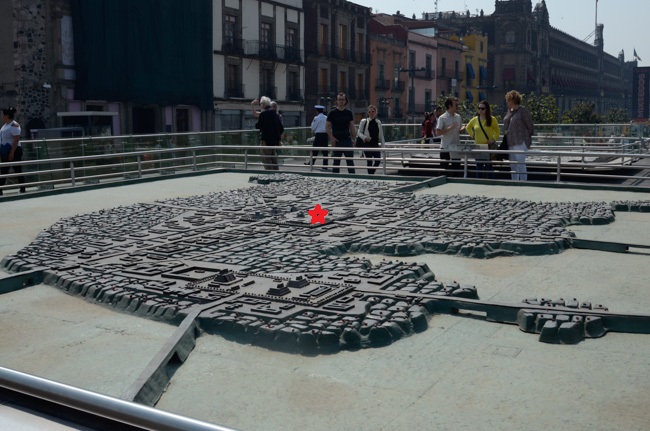 Tenochtitlan, the Aztec capital, was located on an island in a huge lake. This is what the Spanish saw when they arrived.

The area, more-or-less, where we are standing is marked with the red star on this model. It was the ceremonial center of the city.

The causeways connected the city with the mainland. 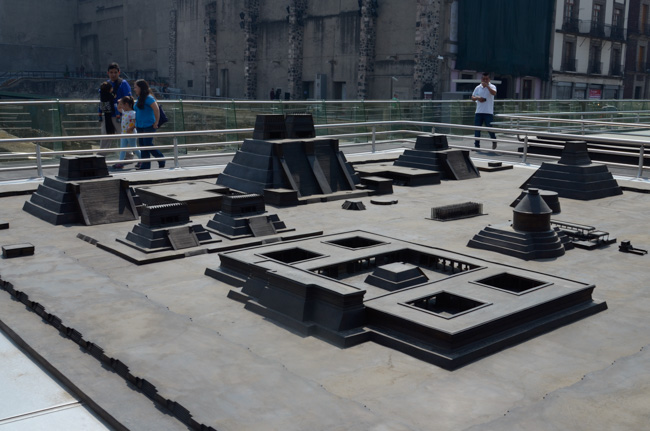 This is what that center was believed to look like. It was the main temple complex. 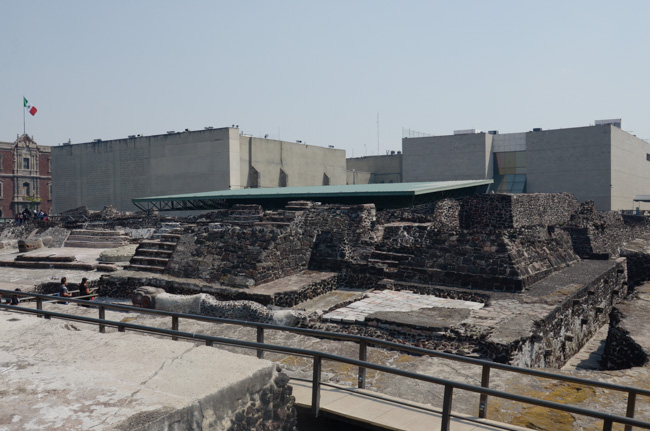 The actual ruins of the temple complex have been excavated near the models shown above. 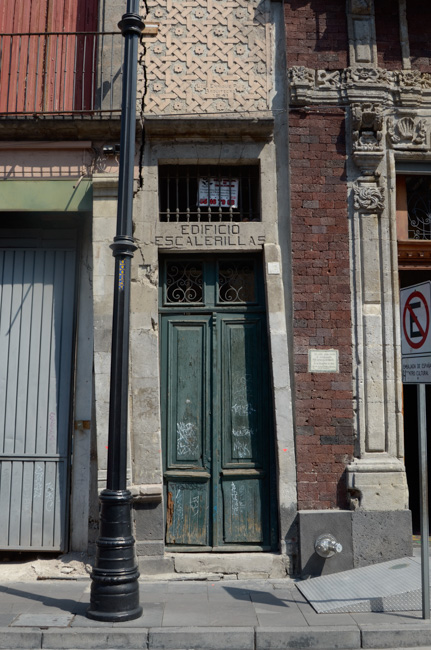 One important fact to remember is that, as shown above, the city is built on what was once a large lake. For this reason it is physically unstable. Buildings settle at differential rates and the frequent earthquakes don't help matters. This picture shows how catawampus things can get with everything at slightly odd angles.

In addition to the fact that the city was built on a lake, the water table has been dropping due to overconsumption and excessive drainage. This exacerbates the problem. 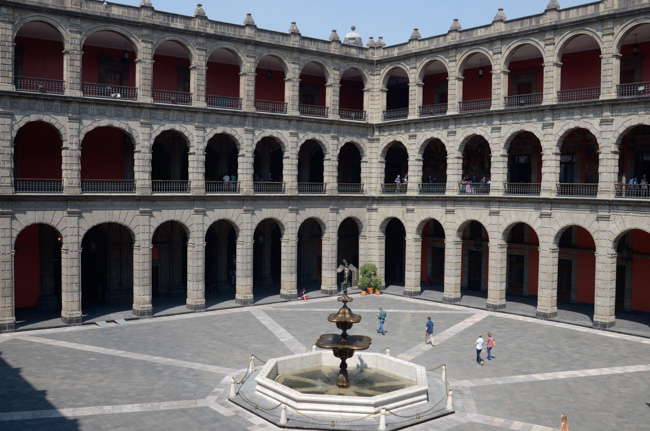 The highlight of our tour was a visit to the National Palace to see Diego Rivera's murals. Unfortunately he died before he could complete what he had planned to accomplish.

Most of the murals had been configured such that they could be removed for safety in the event of a devastating quake.

A humorous comment from our guide was that 50 years ago Frida Kahlo was known as Diego Rivera's wife. Nowadays Rivera is widely remembered as Frida Kahlo's husband! 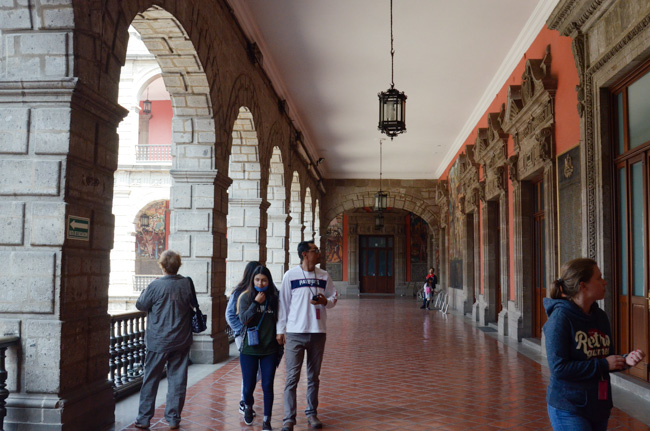 Had Rivera lived to complete his work, this gallery would have been lined with murals. 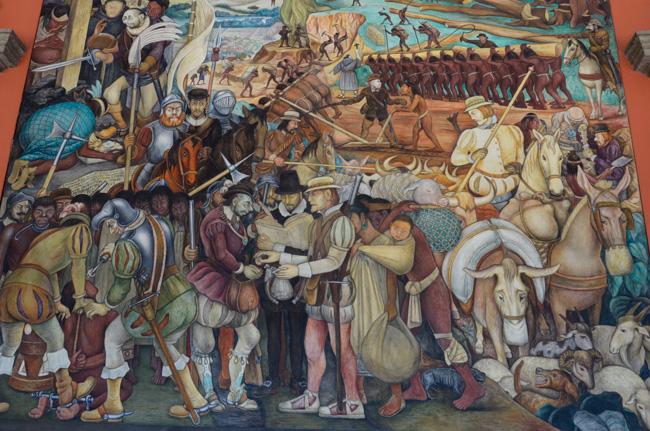 The first mural we reached was "The arrival of Hernán Cortés in Veracruz."

Veracruz was founded by Cortés in 1519. It was the port of entry of the conquerors, the Christian religion, cattle, black slaves, and generally, of the Western culture that prevailed over ancient Mexico, whose submission and destruction are depicted. The info at the link is pretty exhaustive (not to say exhausting).

Primary images are the imported domestic livestock on the right, the enslavement of the native population in the upper right and lower left, and Cortés receiving tribute from the indigenous people in the upper left and other Spaniards in the center.

Cortés himself is depicted as sickly and deformed. This was not, apparently, true. 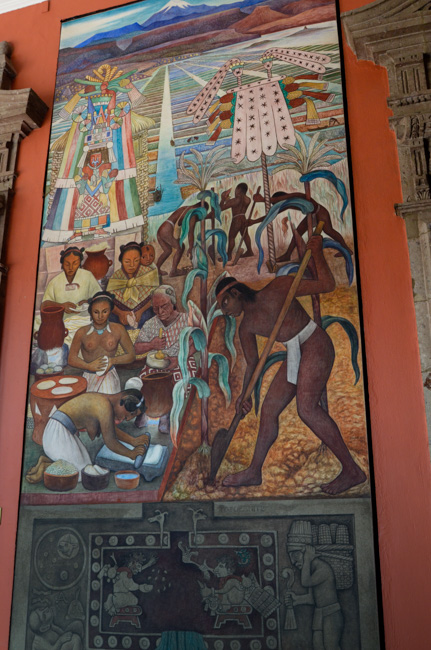 This mural celebrates the cultivation and use of corn.

The scoring around the mural that allows it to be removed if necessary can clearly be seen. 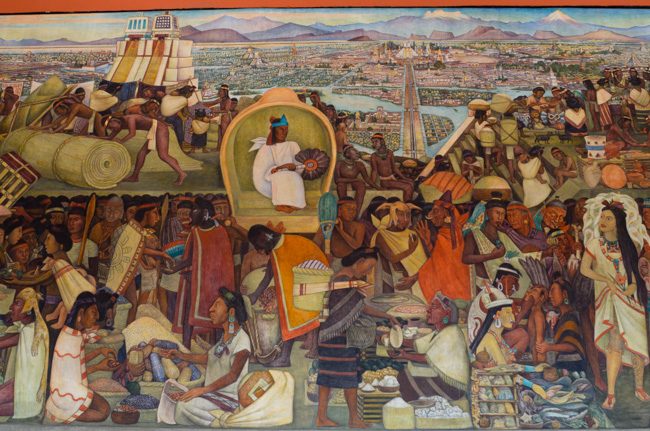 From the placard at the site:

"This view of the market of Tlatelolco, described in the Spanish chronicles of the conquest, shows the multicultural population of Mexico and Tenochtitlan, with its roads, temples, and neighborhoods built over the lake.

The Aztec bartered goods, and also used cocoa beans as money. The distribution of goods and order of transactions were monitored from a high place by the ruler.

The lively exchange brings together people of different Mesoamerican origin with the rich variety of manufactured goods, agricultural products, minerals and animals, which came from the basin of Mexico or from distant places."

Rivera put friends and associates into his murals. His wife Frieda is shown on the right of the image surrounded by a halo of lilies, and both soliciting and rejecting the advances of the surrounding men. 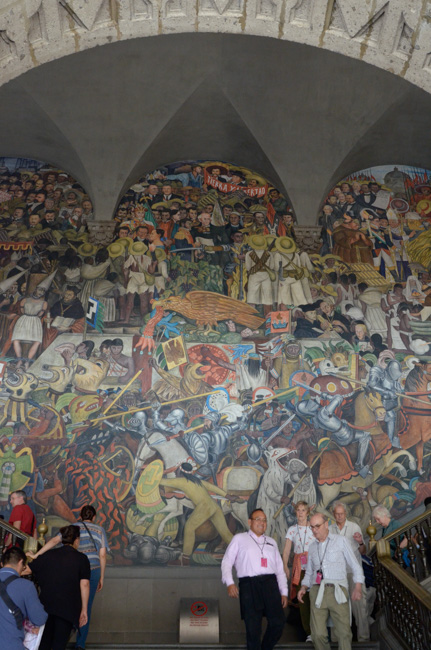 This huge production is called The History of Mexico. It shows the vast sweep of the region's history. This is only a small part.

When I first visited Mexico in 1969, there was no security to see the murals. There were also no crowds. On this visit we had to pass through a secure checkpoint, always wear badges, and never put on our hats or sunglasses! On the way out our guide had to surrender the exact number of badges he was issued in order to get his guide's permit back. Luckily we beat the crowds because as we left there was a long line to get in.

As we left the National Palace and crossed the zócalo, we passed numerous dancers like those we saw at Cholula. We also threaded our way through groups of shamans who set up shop and purport to treat people with the smoke from burning herbs and who knows what else. 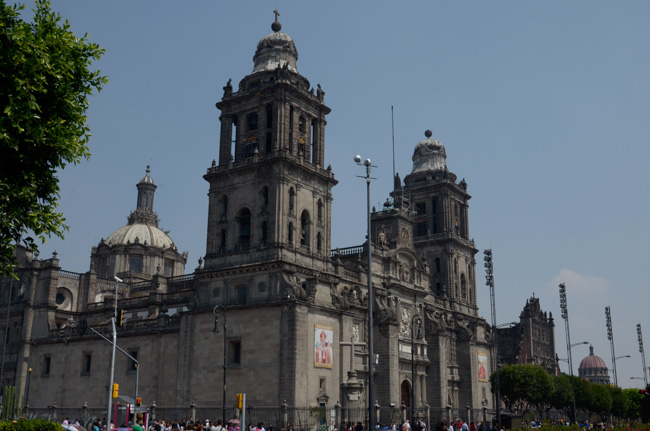 The great cathedral fronts onto the zócalo. We didn't have time to visit. 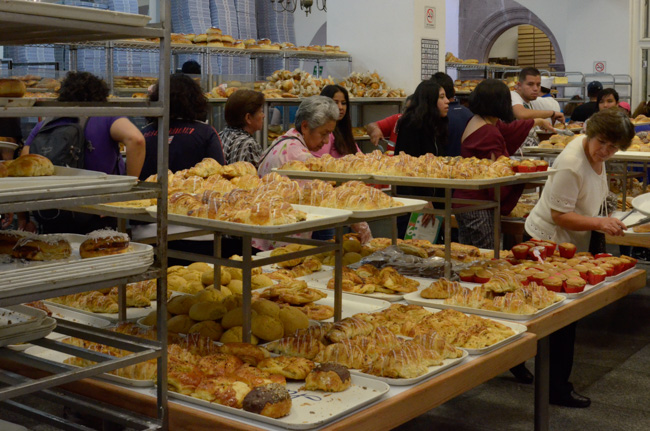 After lunch, we had a few moments to explore the Ideal Bakery (web site in Spanish). The bread and pastries were tempting even though we had just stuffed ourselves, but the real attraction was the customers. All but the most elaborate wares were set out for self-service. Customers would select one or dozens for purchase. The place was jammed!

The bakery also makes over-the-top wedding cakes. Some on display were four or more feet tall (and I didn't even go upstairs where that department was located). 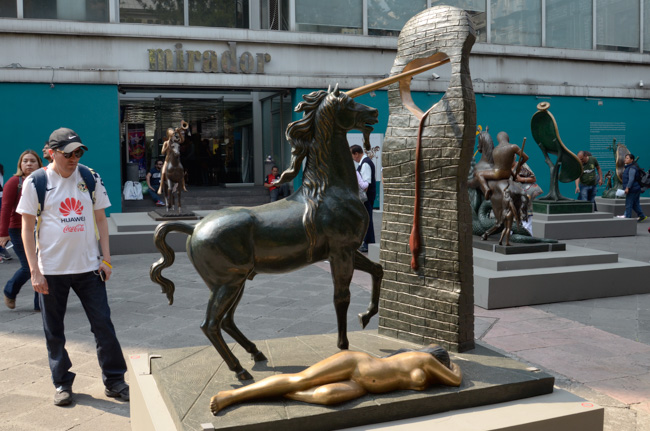 Our final stop on our Mexico City tour was the Latino Americano Tower, the first major skyscraper built in an area of such seismic activity. It was completed in 1956 and survived the 8.0 1985 earthquake without damage. That's an impressive achievement.

The waiting line to go up to the observation deck was crowded and long, however, so I and several others decided to wait outside and enjoy this exhibit of Dali sculptures.

After viewing the artwork we found seats in a shady garden where we met this young Mexican professional who had recently returned from study at Santa Rosa Community College in Sonoma, California. He was eager to practice his English. His name was Martin, so I captured this shot of him with our Martin -- Martin Squared!

After visiting the tower, we were back on the bus to our final hotel near the airport. We would be sorry to bid our fellow Road Scholars goodbye. It always seems like just when we're getting to know folks, we part ways.

See below for some pictures of our wonderful staff: 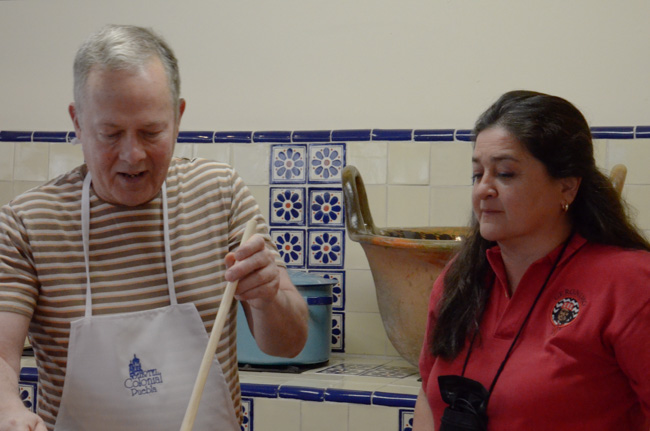 I'm disappointed that I don't have a better picture of Haydee, our excellent group leader. For someone as exuberant as she is, this is an uncharacteristically somber expression. Thank you, Haydee for all our guidance! 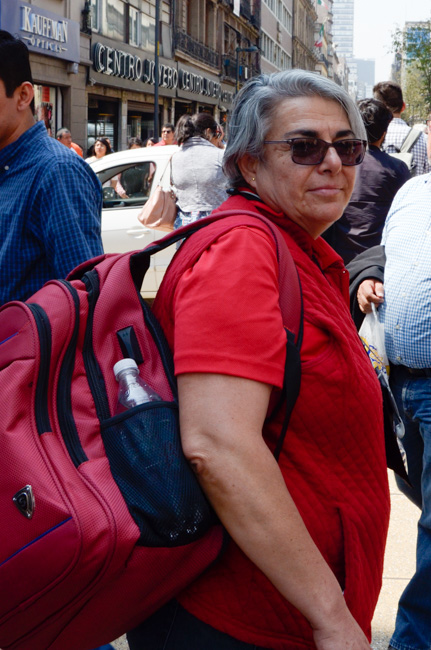 Undoubtedly Beatriz was counting all her "ducklings" when I got this picture. She was our group "mother" and was constantly checking up on us. That was not always an easy job -- specially folks like me who are always wandering around trying to find a better picture. 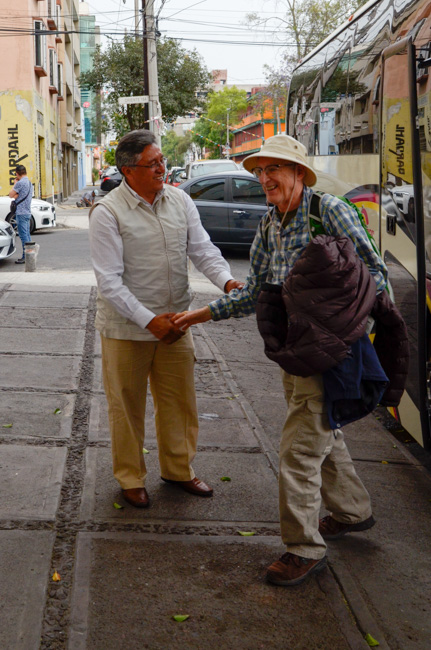 Last, but not least, our stalwart driver Tonio made sure we got where we needed to be when we needed to be there. He had to wrangle the bus through traffic jams, narrow streets, rutted dirt tracks, and twisty mountain roads. He always had a smile and was always ready to help us on and off the bus.

What a great team! 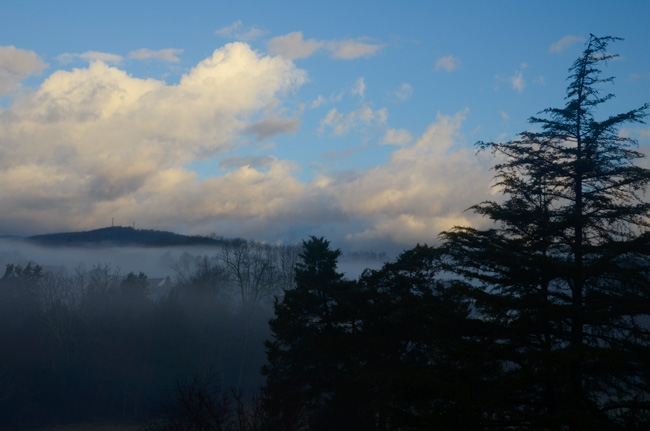 As always I end with a picture of home. The ground fog gave an eerie atmosphere to the Brushy Hills and woods behind our house one morning shortly before our departure.

Getting home was a bit of a challenge as it turned out. I forgot that I still had one of the apples that the Mexico City hotel had given the early departure crowd as part of our box breakfasts! That apple cost us about an extra hour in customs!

Nevertheless we eventually were cleared to go, sans apple. We stayed that night with friends in the DC area and had an uneventful drive home the next day.

What a delicious trip in so many ways! We haven't made it up to the Hispanic grocery in Harrisonburg yet, but we will soon.