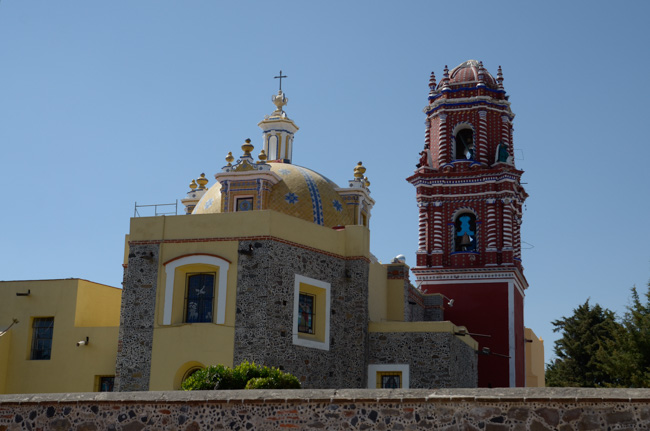 Our first stop was the church of Santa Maria Tonantzintla. Unfortunately pictures were not allowed inside. I bought a postcard intending to scan it, but there are several interior pictures at the link. (Not as satisfying as my own would have been, of course.) This picture was taken of the back of the church as we approached.

Tonantzin was an Aztec mother goddess who has been associated with the Virgin of Guadalupe. 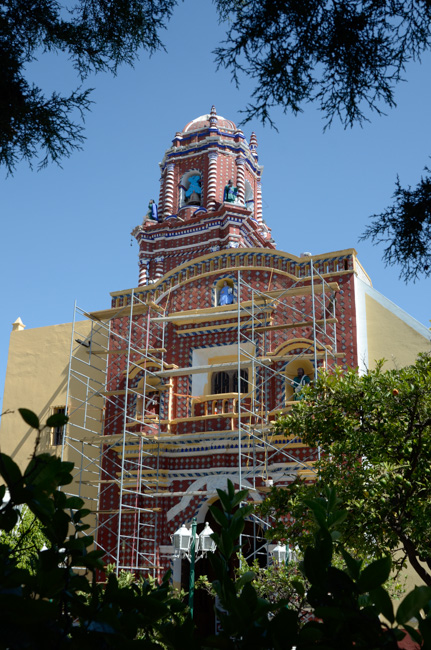 The facade of the church was being repaired after damage from the 2017 quake. 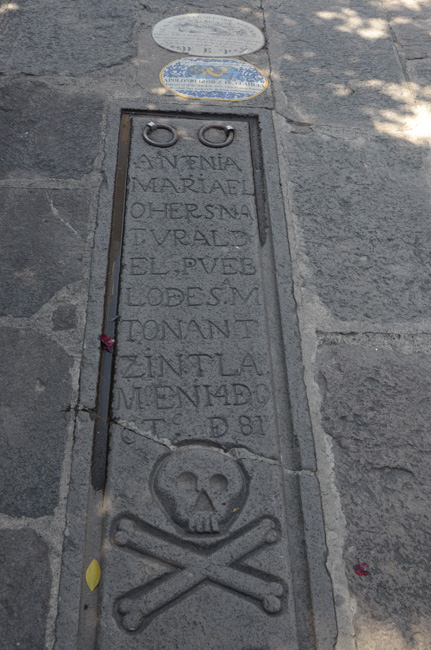 The large stone marks the grave of Antonia Maria of the village of Tonantzin. I've not been able to find a date. The oval marker above it is for Apolonio Gomez de Cuahuey, who died in 1905 aged 17.

The marker above it is for Miguel Quechol Serrano, who died in 1946.

I wonder if they are all in the same grave and if they were related? Graveyards are fascinating places! 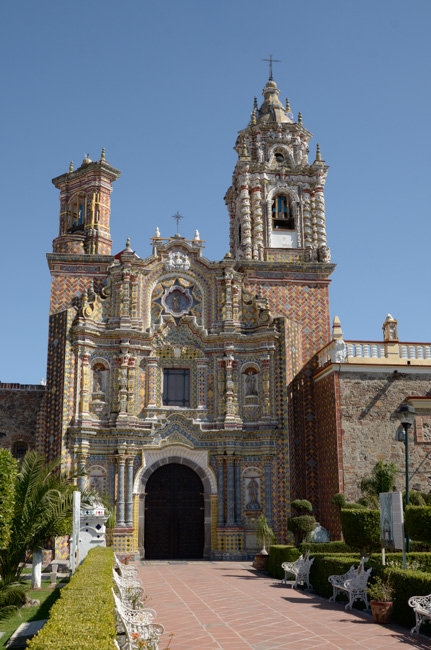 Our next stop was San Francisco Acatepec. I've been unable to find a particularly useful link in English for this church. According to signs at the site the building was started in the 17th century, but wasn't completed until 1760. The facade is covered with talavera tile.

The interior was destroyed by fire in 1939, but rebuilt according to a sequence of photographs that had been taken by Guillermo Kahlo (Frida's father) when he was working with Gerardo Murillo to produce a set of books on the churches of Mexico. 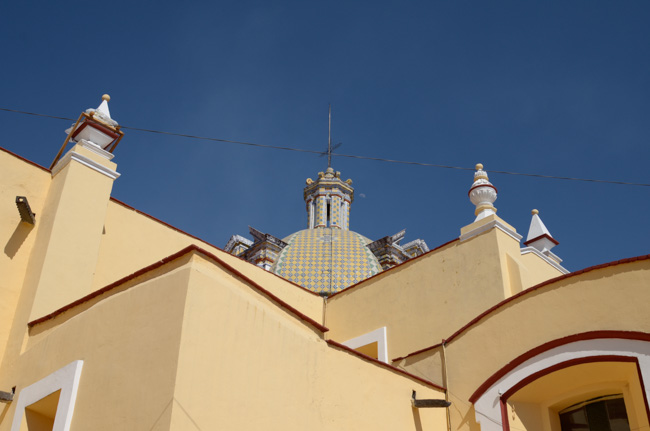 We were unable to enter through the main door because of earthquake damage. This is a view of the dome from the patio on the side entrance. 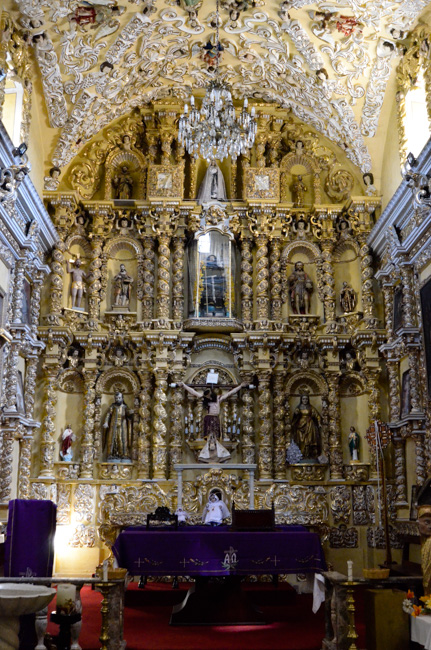 Although the interior was not as ornate as Santa Maria Tonantzintla, it was elaborate enough! 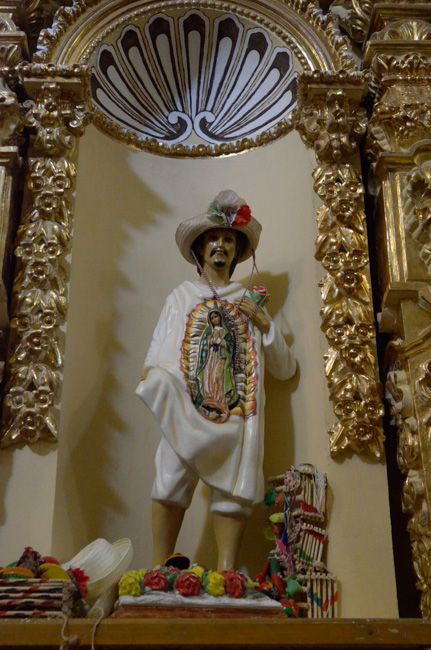 This is a representation of Juan Diego, the peasant (or Aztec prince?) who saw the apparition of the Virgin. 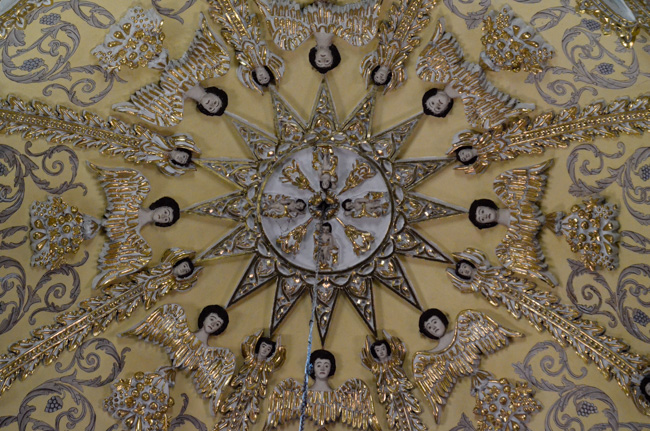 The dome was the most striking part of the interior. 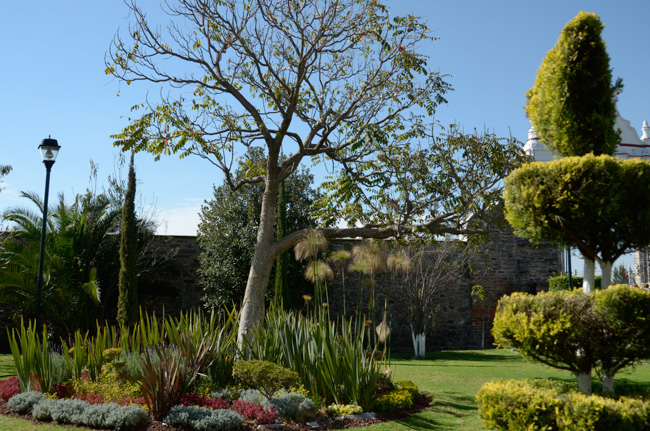 The garden was lovely and peaceful.

After our visit to the churches, it was time to return to the hotel and pack. We would be leaving early in the morning for our final day in Mexico City.

That night for supper, we met in a special room of the hotel to feast on our handmade mole poblano served with chicken. YUM! Unfortunately there was no way to assure that each team got their own product, set aside each individual. Since mine was so good, I'm sure it came from Team B!