After the pottery we drove to Cholula to visit the great pyramid and the historical site at its base. The pyramid is the largest by volume in the world. It has not been excavated and looks like a hill with a church on top. 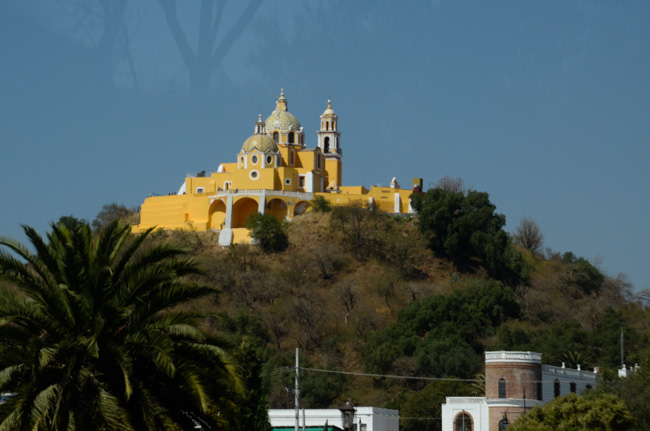 As we drove up to the site, it definitely doesn't much resemble a pyramid! It looks like a church on a hill in the middle of town. But this was a holy site long before there were any churches in Mesoamerica. 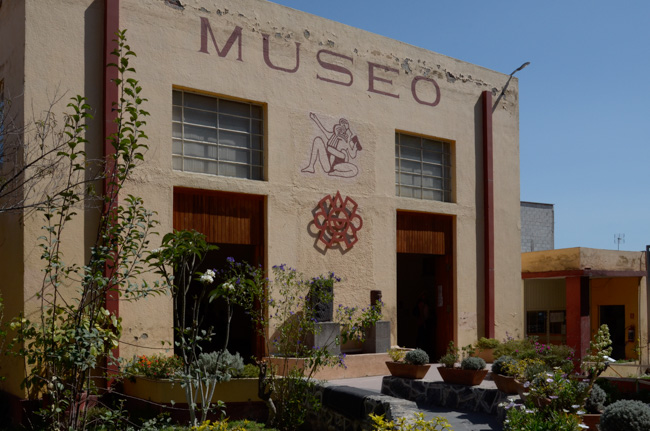 Our first stop was the museum at the entrance to the archeological site. We had to wait a bit because there were at least a couple of school groups ahead of us and the museum was small. 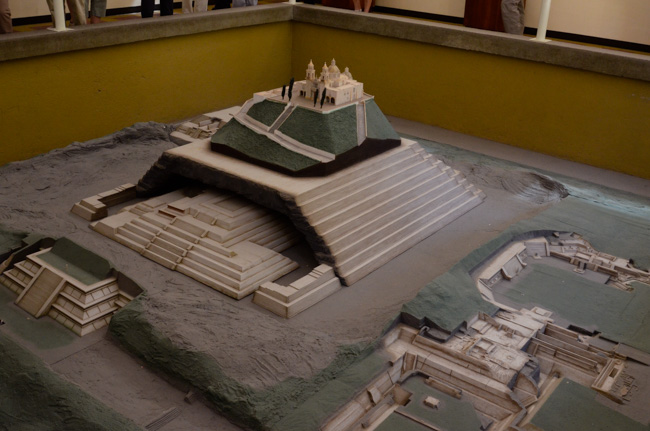 The high point of the museum was this scale model of the pyramid. I've mentioned before that the Mesoamericans built and rebuilt on top of prior construction. This was no exception. The church sits atop a platform on top of an earlier platform that was built over a yet earlier.... Etc.

Additionally there was a large ceremonial and residential center. Most of it is still underneath the modern city of Cholula, but some has been excavated, as shown here.

We always say that archeologists have wonderful imaginations, which is true, but the identification and reconstruction of the inner structures has been done by tunneling through the hill to find the different layers. It isn't possible to excavate the entire pyramid because the church is itself an historical monument. 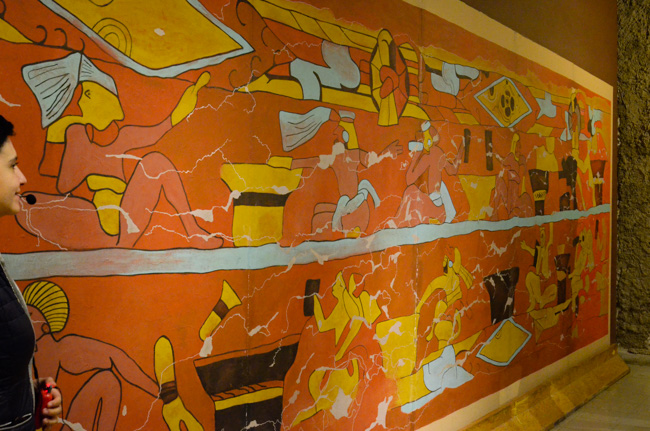 Also in the museum is a reproduction of a mural that was found when the area at the base of the pyramid was excavated. It is called the Mural of the Drinkers. The original is not open to the public.

The subject is a ritual feast which the participants are celebrating with pulque. 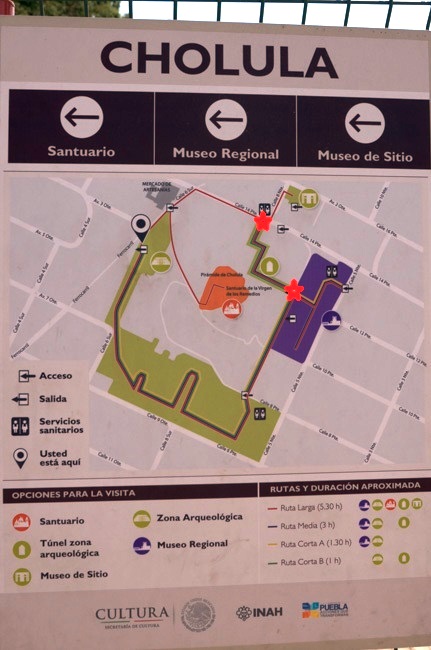 After visiting the museum, we braved a segment of the tunnels through the pyramid. Our guides first questioned us about any tendencies to claustrophobia because of the constricted space. It was also a fairly long walk through dark and uneven passages even though we only covered a small fraction of the tunnels.

Our portion within the pyramid is marked by the red stars. This is the only interior part that is open to the public although there are many more kilometers of tunnels. 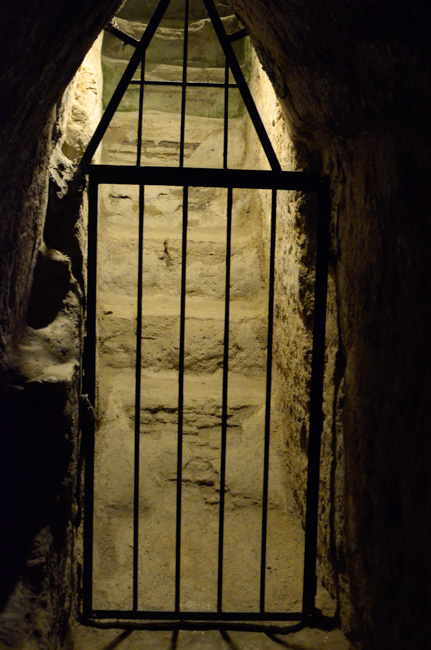 The face of one of the interior structures within the mound. We passed several such in our march through the pyramid.

The excavators chose to the use the Mayan arch form for their tunnels. It is very stable. We were told that during the September earthquake, which severely damaged the church on top of the pyramid, the tourists inside the tunnels had no problems.

An article at the UK Daily Mail web site includes a summary of the history of the pyramid and a link to a video of the walk through the tunnels. Pretty creepy!

After coming out of the tunnel, we had a welcome break before touring the rest of the site. The weather through the trip was wonderful -- cool in the mornings and pleasantly warm during the day. The only concern was the intense high-altitude sun, but everyone had hats, many had long sleeves, and everyone had sun screen.

That certainly doesn't look like a pyramid behind out resting place! 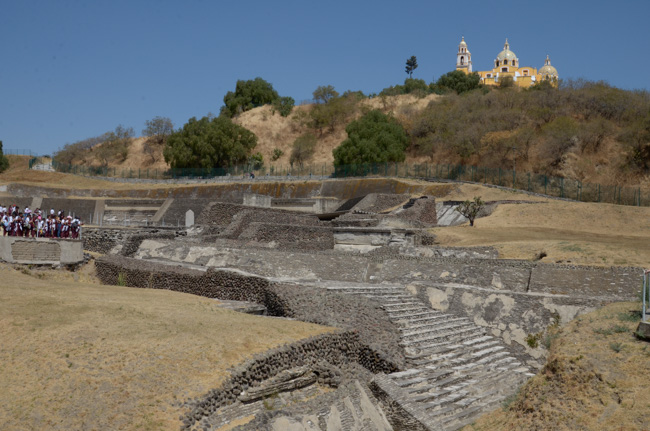 We walked around the site overlooking excavated portions of buildings.

The mob of children preceded us, but there was enough room that we didn't get in each other's way. 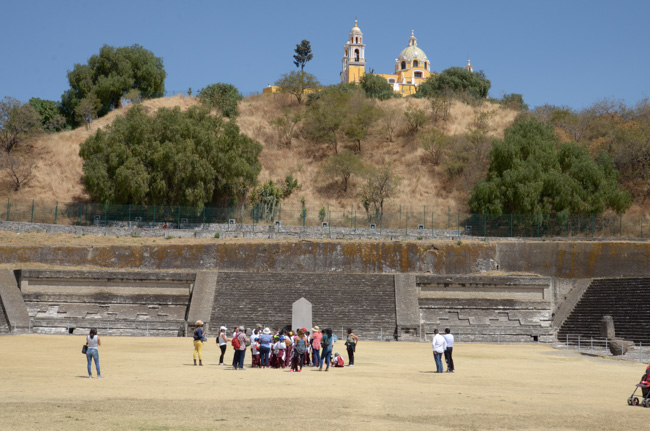 As at Monte Alban the shape of the central plaza had good acoustics. The children delighted in clapping to hear the echoes.

This altar was a later addition by the Aztecs. It is dedicated to Quetzalcoatl, the Plumed Serpent. When the area was excavated there was evidence of human sacrifice.

I've tried to find a good external site with info about Quetzalcoatl, but nothing suits. They either go into excruciating and obscure detail or wander into woo-woo land. Pretty much everyone agrees, at least, that the story that the Aztecs thought Cortes was the return of Quetzalcoatl is a myth. 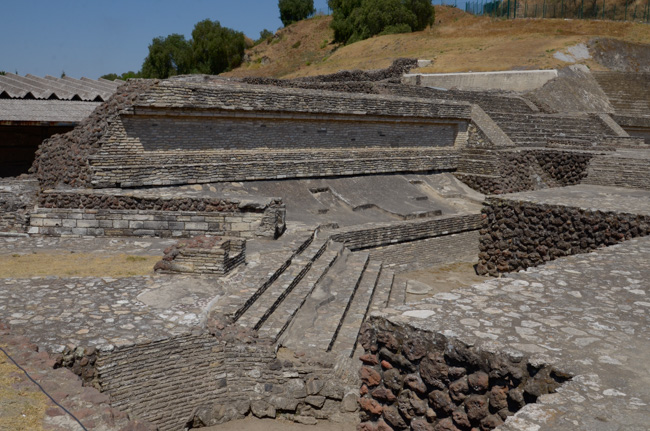 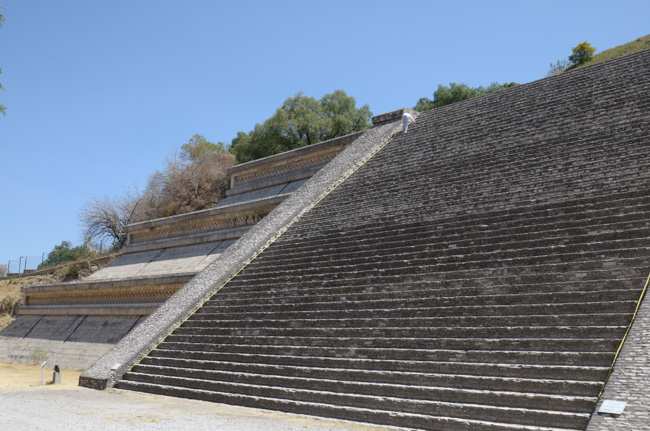 Just in front of the road ascending to the top of the mound, a grand staircase had been restored to show how the access to the great pyramid may have looked in its heyday. Unfortunately the clearly modern reconstruction has kept the site off the UNESCO World Heritage List. We saw a similar thing in Jordan where the reconstruction of the forum at Jerash was deemed inauthentic.

Given how much all ancient archeological sites have been restored and modified, this restriction seems a bit precious to us. 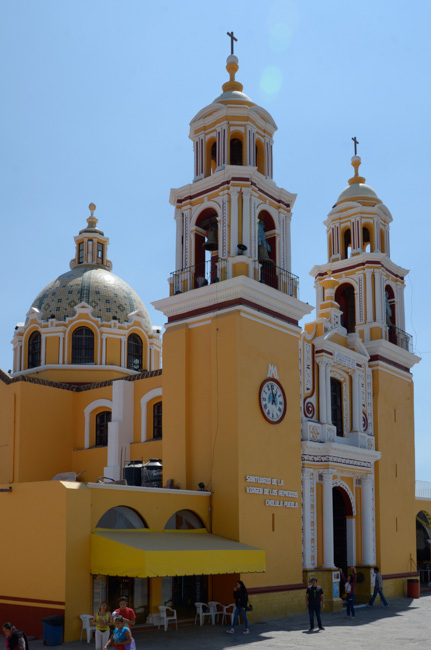 The church on top of the pyramid is itself an historic monument. It lost both of its cupolas in the 2017 earthquake, but they were quickly rebuilt. Restoration work was still underway at the site. 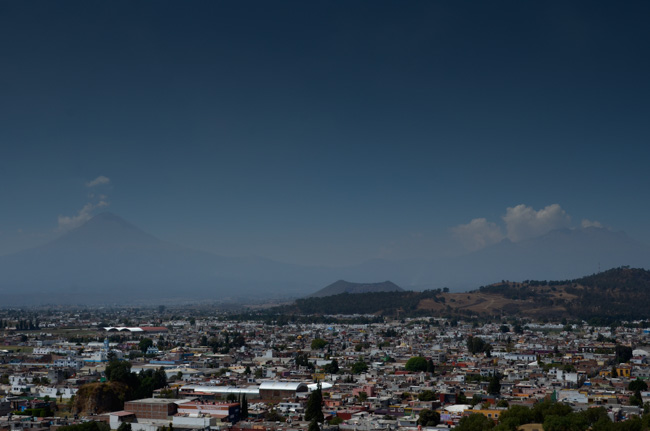 It was quite a hike to the top of the pyramid to visit the church but worth it for the views. The haze makes it hard to see, but the volcano Popocatepetl, with its conical peak, is on the left. Barely visible on the right is its companion Iztaccihuatl, which some say has the profile of a recumbent woman. There is a legend that they were disappointed lovers before being turned into mountains. 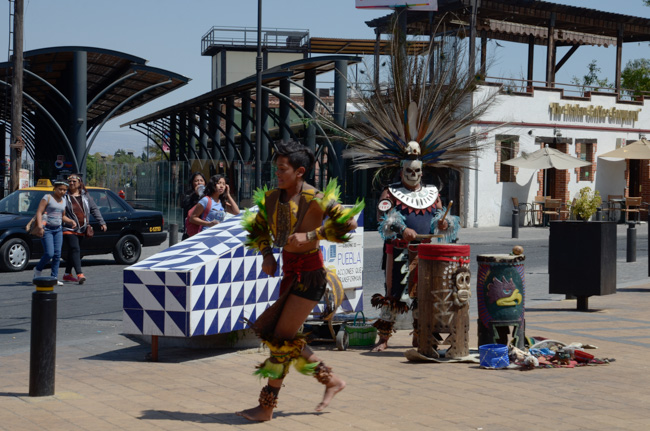 Many of our group chose to shop rather than climb. Others just wanted to bask in the sun. After coming back together we struck out for lunch. On the way we passed these folks doing a folkloric warrior dance. I think the drummer, with his heavy costume and headdress, was actually getting more of a workout than the dancer. I'm not sure how authentic this activity is, but it was quite striking and we were to see others in Mexico City. 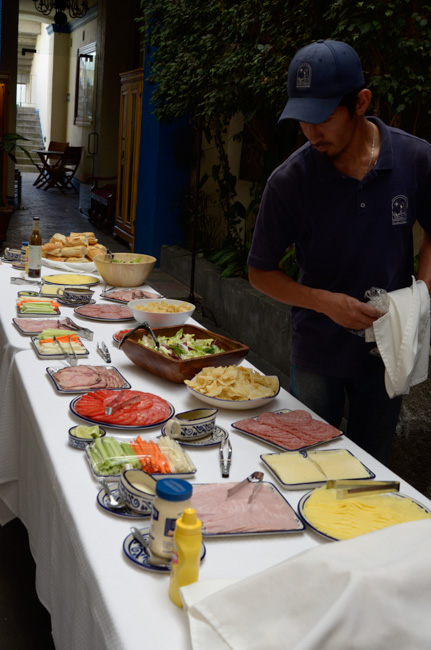 It seems silly, I know, but it really is so!

After spending ten days in Mexico enjoying all sorts of delicious traditional foods and learning to cook them, in Cholula we were treated to Mexico's version of Subway!

There was great rejoicing at this comfort food. They even had French's mustard, mayonnaise and potato chips! There was not a tortilla in sight.

(The place where we ate was a B&B and spa named Estrella de Belen, or Star of Bethlehem. I'm glad I didn't discover the extensive collection of crèches earlier or I might not have had time to eat!)

After lunch we were back on the bus for our afternoon excursion.