Our last day in Puebla was spent visiting some spots in the countryside. The first stop was at the Talavera de la Reyna workshop where we got to see how the local handcrafted pottery was made. One of our Road Scholars was REALLY interested in getting a set of dishware, so that made it a bit more personal. 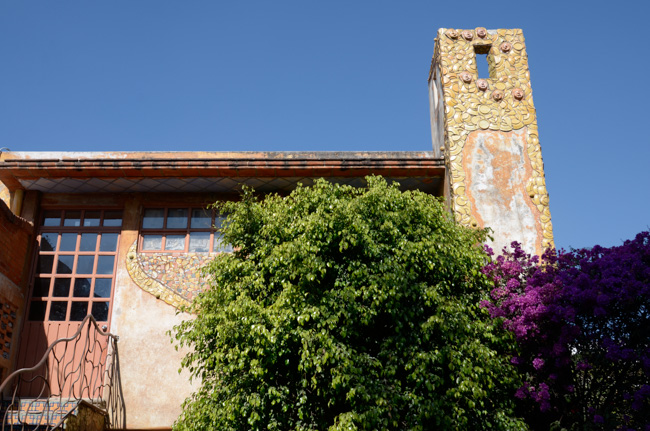 The first view of the facility as we enter included this great facade with pottery mosaic. We didn't ask, but I'm certain all the mosaics around were recycling failed firings.

Talavera pottery has only recently been awarded the protection of a Denominación de Origen (DOC) de la Talavera designation. There are only nine certified workshops -- of which this is one.

Alejandra is explaining that one of the requirements for certification is the use of two specific sands to provide the base for the pottery. One is light and the other dark. 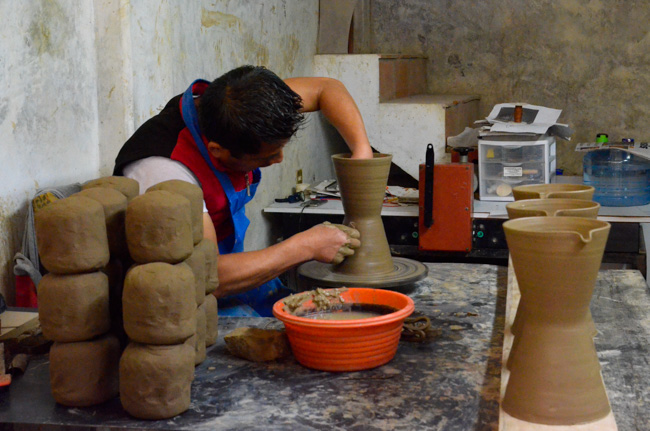 After an extensive process to take the sands, refine them, and produce the clay, the pottery is then either thrown or molded. The master potter is the only one allowed to throw pots. 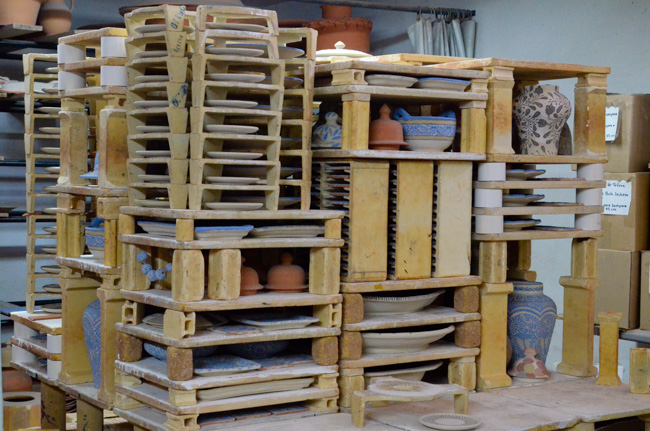 Whether thrown or molded, the pottery goes through two firings. When I was in high school, a friend and I got into ceramics. The very fragile unfired clay was called greenware. It wasn't until after the first firing that a design or decorative glaze could be applied.

These vessels waiting for the kiln look to me like greenware. Many of them already have designs, but these may be underglaze designs. (Although I could be wrong.)

The racks are designed to allow air within the kiln to flow evenly throughout to prevent uneven heating that could cause cracks or other problems.

The pallet ran on rails on the floor to enable it to be pushed into the kiln. I'm sorry that I didn't get pictures of the kiln itself. 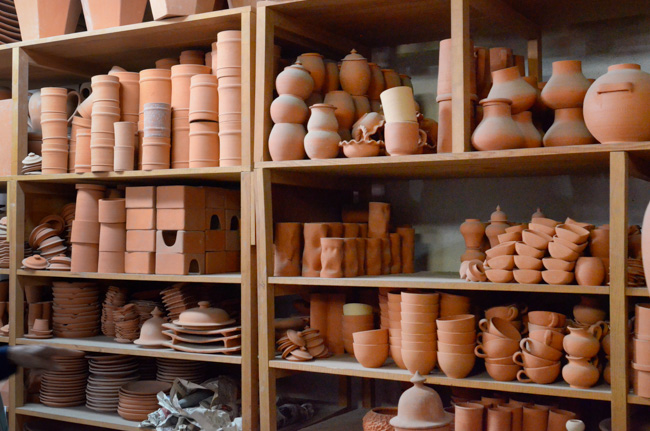 Pieces that have already received their first or bisque firing are waiting for further processing. Greenware is too fragile to be stacked like this. 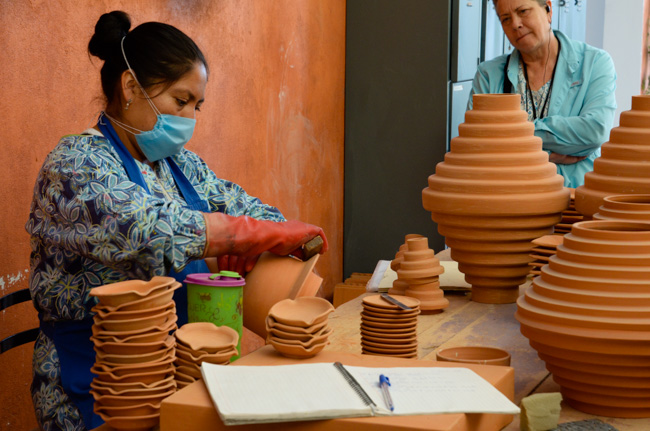 After the first firing, pieces that were molded will need cleaning to remove seams from the mold and other imperfections. There was a translation challenge when someone asked what the worker was using to smooth the ceramic. The answer: emery cloth. 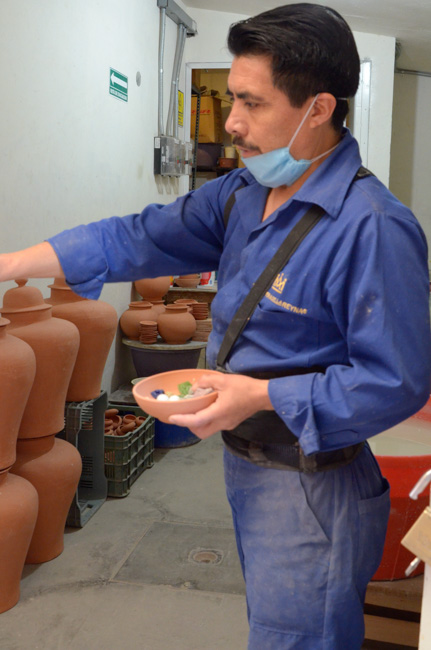 Our next stop was for a presentation from the master glazer. He described the traditional glazes used. The pottery is given an undercoat of white and then the design is produced by using only six colors: blue, yellow, black, green, orange and mauve. He pointed out that many of the non-DOC producers will incorporate additional colors, but those are not authentic. 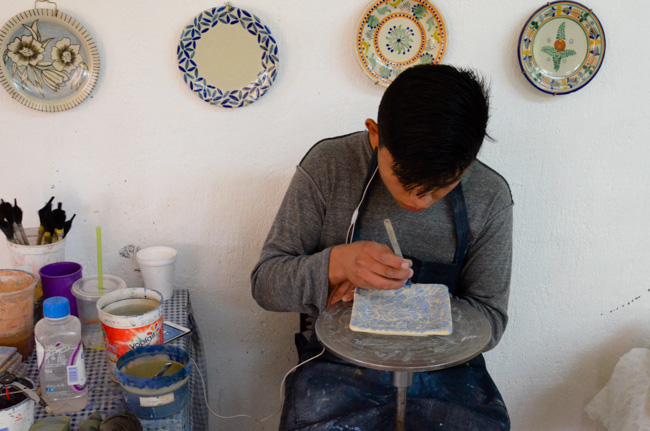 One of the challenges of keeping the talavera tradition alive is recruiting new skilled craftsmen. We were told that this producer has only one young apprentice and here he is! It is easier to make more money elsewhere.

Even though the product sells for a significant price, the cost of production is high. There are many opportunities for failure throughout the process. When I was working in ceramics, I undertook a major project to make a crèche set. The angel lost her wings while still in greenware. One shepherd lost his head, also while still in greenware (did I say "fragile?"). Greenware is malleable so the angel was converted to a shepherdess and the shepherd is a bit taller than he started out. Later I was preparing the third firing to add the gold to the kings & their camels. While carrying the remaining pieces to the kiln, I tripped. Oops! To this day 50 years later I have but two camels, only one with gold, no angels, the only known shepherdess and a shepherd with a crick in his neck. 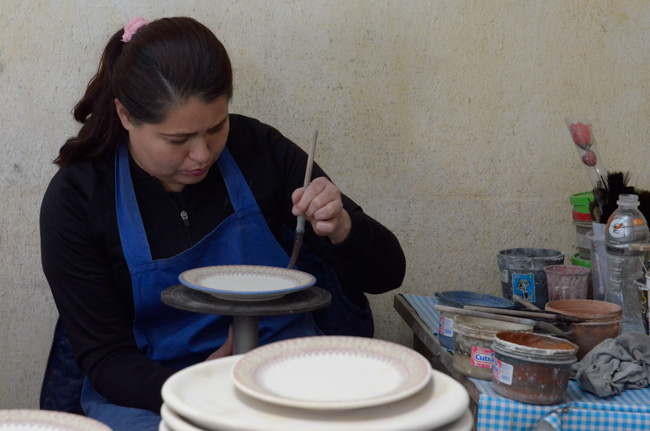 This woman is applying an intricate traditional design to a plate that will become part of a dinnerware set. 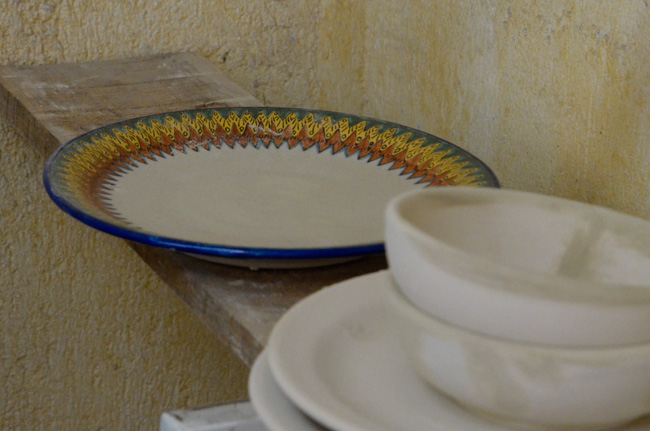 This is what the design will look like when fired. The colors are quite different after the second firing. That is one of the challenges for the master glazer! 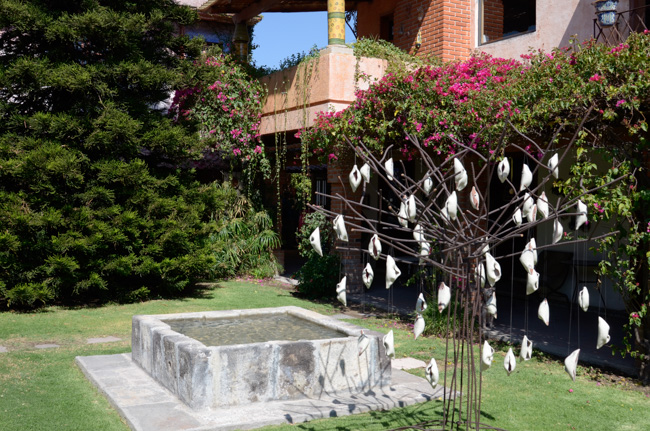 After our tour there was ample time for shopping. Not choosing to shop, I wandered around. This variant of a bottle tree is hung with ceramic "shells."

The fountain was beautiful in its understatement. Jim and I enjoyed watching the patterns in the water. Very peaceful.