The hotel hosted the final cooking class of our trip. We again formed A & B Teams, but the order of our programs was reversed. Our B Team had the morning session. I'm happy to report that our efforts didn't trigger any earthquakes! 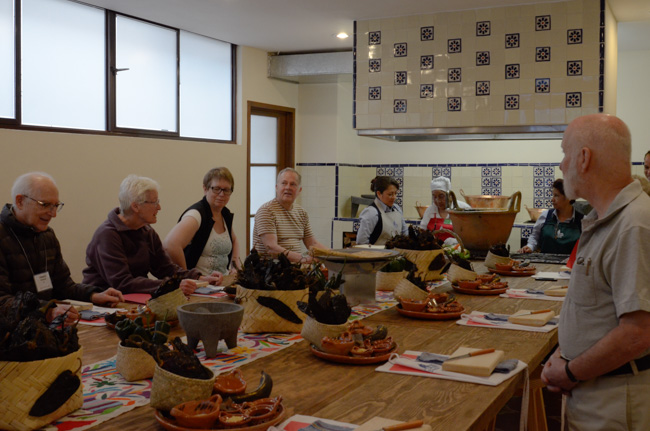 The hotel had a designated room for their sessions. Haydee told us that Geronimo Travel recruited the hotel to host classes for Road Scholar trips. After making the investment in the facility, the hotel decided to offer its own cooking program as well! 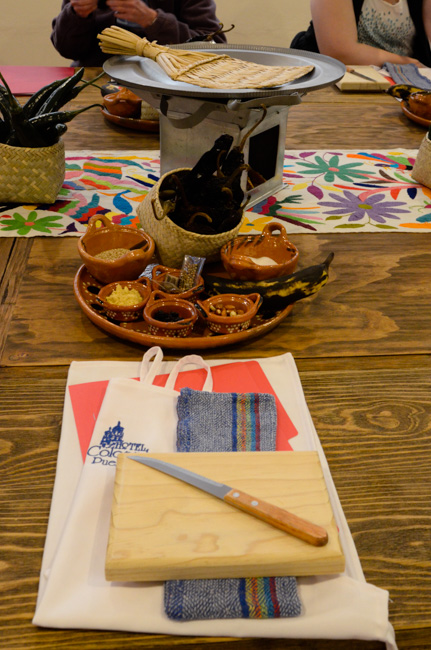 Mole Poblano is the traditional mole developed in Puebla by Spanish nuns.

As was the case in our other classes, the ingredients were attractively arranged and handy. We got to keep the bound recipes and the aprons as souvenirs!

Unlike the other classes, we didn't do anything with most of the ingredients. The little dishes of raisins, spices, sugar, etc., were just collected into larger pots for addition into the final product. The only items that we processed were the chiles (deseed & fry), plantains (slice & fry), and sesame seeds (fry).

The chiles were not quite dry and the deseeding was a messy process! Of course everyone wore gloves. 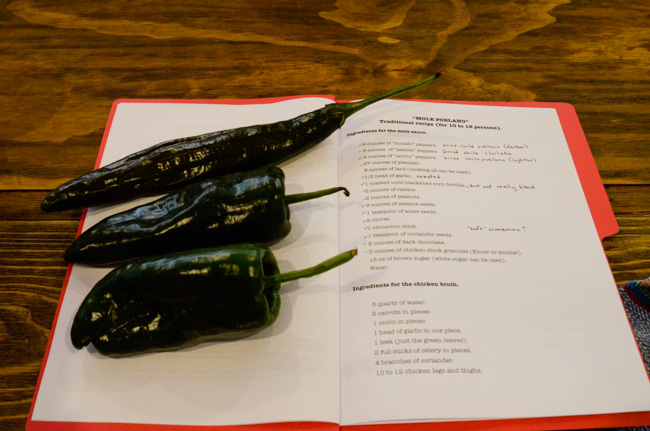 Poblano peppers come in two varieties: darker (the middle chile in this picture), and lighter (the lower chile). This clears up a question that I've had for some time on the variability of poblano chiles! Moreover chile peppers gain new names when they are dried.

We used three chiles in the recipe: 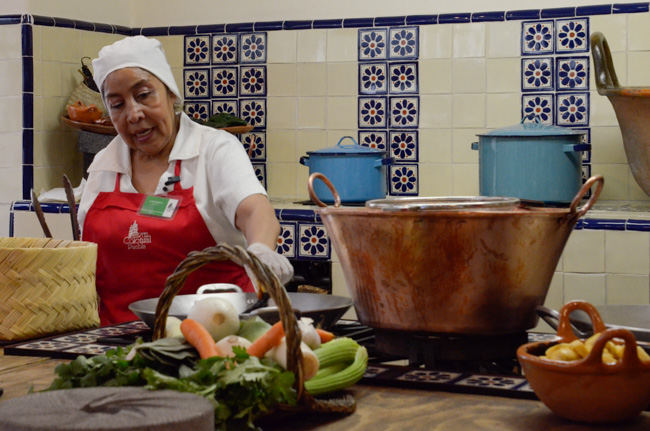 Our instructor, Lourdes (Lulu) Cortés Ruiz, has retired from the chef's position at the hotel restaurant but continues to lead the cooking classes.

She demonstrates how to fry the deseeded peppers. The oil must be hot enough to sizzle the pepper when added. 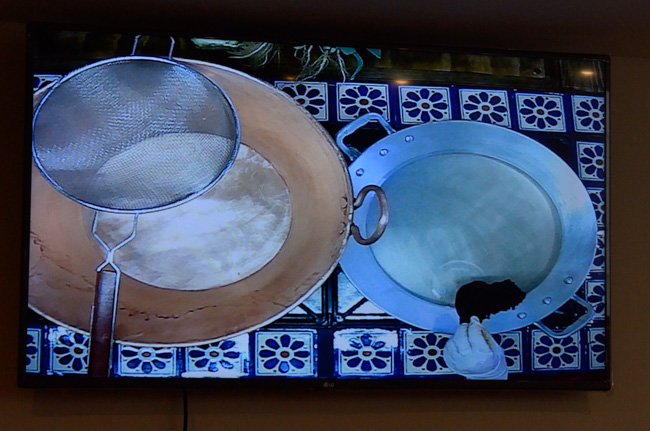 One of the nifty features of the demonstration kitchen was an overhead camera that gave us a bird's eye view of the action.

The oil is just about to sizzle. When done, the peppers will be put into the strainer to drain.

Once things got underway, volunteers continued the frying process. We learned, by the way, that some deseeders were more conscientious than others. Leaving too many seeds ratchets up the heat in the resulting mole. Lulu saved us from ourselves by removing excess seeds! 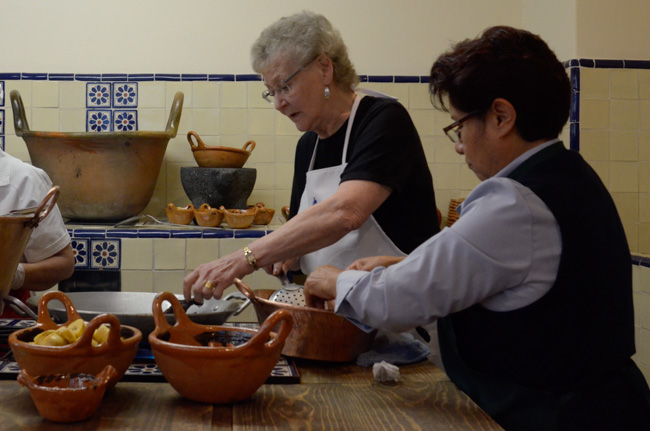 Marie (L) was our Canadian participant. As usual the staff were very helpful and kept us all in line.

She is frying peppers. The chiles will change color and texture slightly when done.

Frying was unknown in pre-Hispanic times because there were limited oil sources. Mole Poblano uses A LOT of frying. At one time the grease would have been lard, but nowadays corn oil is preferred. 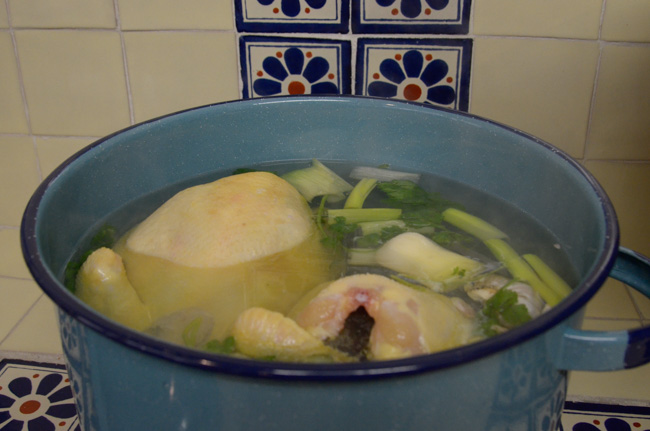 While all the frying was going on, the chickens were put on to simmer. Lulu plopped the whole chickens in with the veggies and let them fend for themselves. 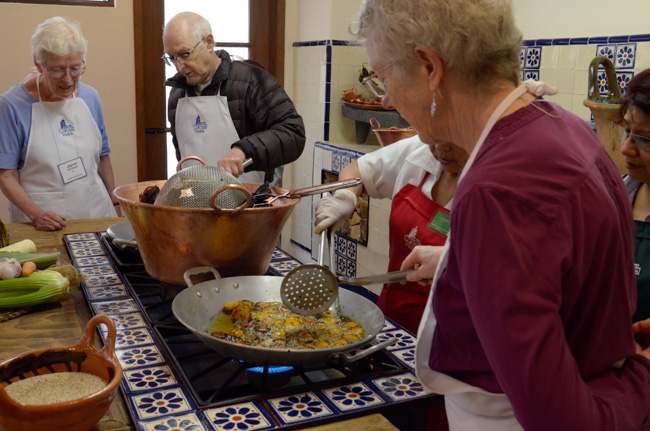 I have a turn frying plantains until dark golden brown.

Jean and Howard are working on chiles in the background. 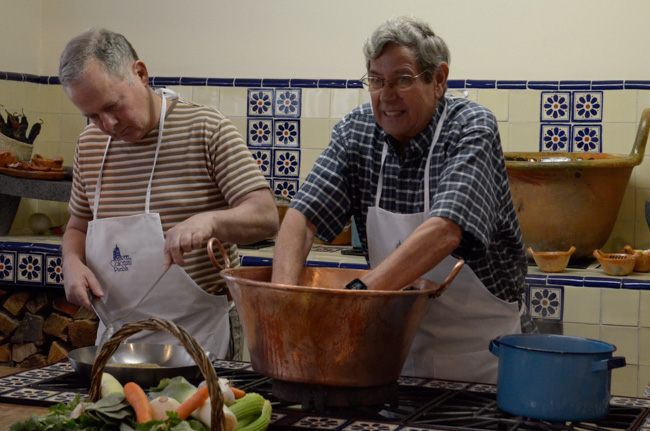 After the chiles have cooled and dried a bit, they become brittle. George enthusiastically makes big pieces into little pieces. When he started, that big bowl was full to the top.

Mole Poblano is not a low-fat dish! 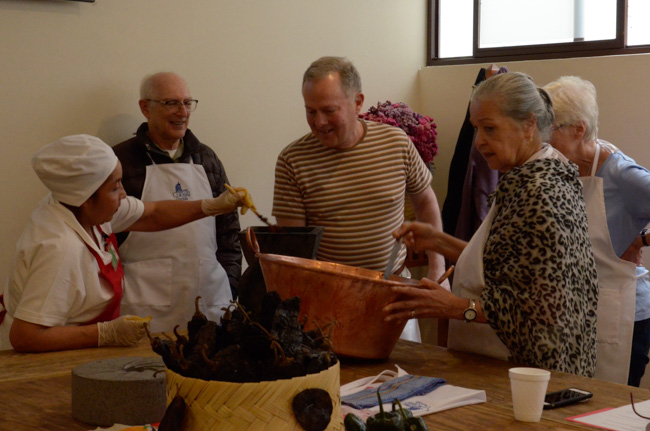 Once the chiles are crushed, other ingredients are added and everything is ground together. In our other cooking classes we used a molcajete, but in this one we used a hand-cranked grinder. Both require a lot of elbow grease. (A blender works well!) The real housewives of Mexico, who make mole in batches that are too large for a home blender, take their prepared ingredients down to the neighborhood molinero.

We all took turns at the grinder. It required a turner, Tom in this case, and at least one if not two pushers to force the viscous mixture through. Lulu is demonstrating the pusher process. Howard, Terry & Jeanne are waiting their turns. 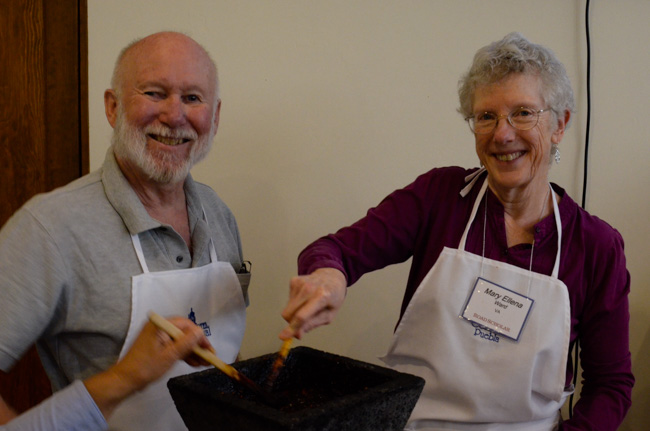 Jim & myself grinding away.

One "feature" of the grinder was that in addition to coming out of the spout and into the collector, the ground chile mixture also oozed out the hole for the crank! This was a nasty surprise if it dripped onto the floor, but it was also a great treat. It was possible to sample the goo to make sure it was up to snuff. Yummy! 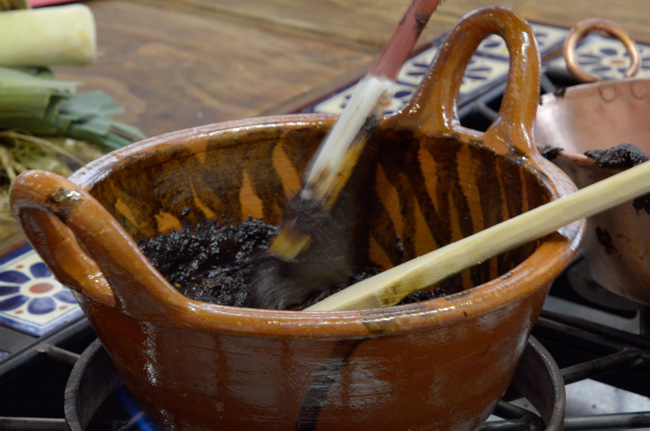 Once the mixture is ground, chocolate is added and it is cooked until it is thick and black. This is a slow process (30-45 minutes) using high heat, a heavy duty cazuela or terra-cotta pot, and constant stirring. There was a lot of discussion (we had plenty of time to talk) about these pots and whether or not authentic mole could be made in anything else. There are plenty of considerations such as proper seasoning, lead content of the glaze, and ability to withstand direct heat without cracking.

If we ever get this far with mole at home, I can assure you it will be cooked in a Dutch oven!

We wouldn't eat our mole until the following evening's farewell dinner. After our morning labors, we were off to lunch and a free afternoon. 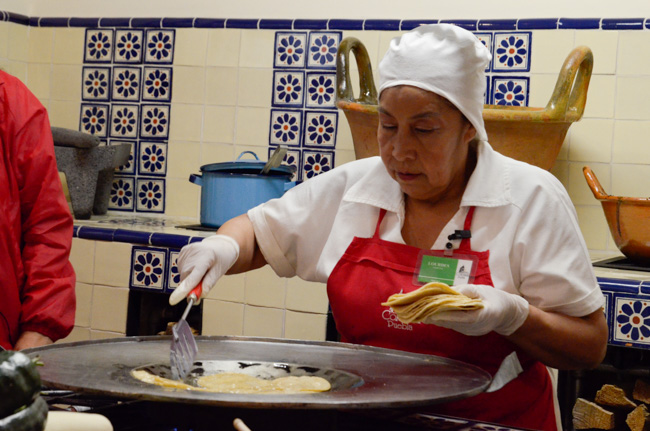 We reassembled later in the day for an unexpected treat.

Haydee described in mouth-watering detail a seasonal specialty called chiles en nogada. The season for this delicacy is August and September when the specific cultivars of fruit are available so we weren't expecting it.

As it happens, the hotel chef had frozen some of the filling when he last prepared it and put on a special meal for us. That caused a major shuffle to the schedule.

One of the additions was a demonstration of making chalupas poblanas, a popular street snack. Lulu started with small corn tortillas, thicker than the normal. They are fried in a comal pozo. 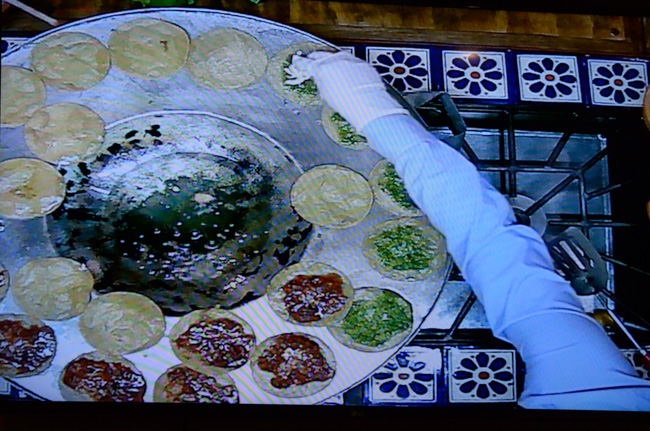 This overhead shot shows the advantage of the wide rim. The fried chalupas can drain while still staying warm. They are topped with red or green salsa, shredded chicken, and queso fresco. Or, since we had all that mole available, mole poblano! 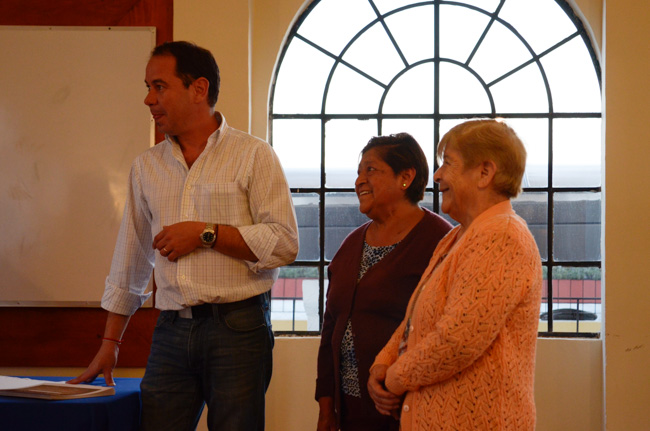 After the demonstration, we went up to the rooftop garden room for tamarind margaritas and a "graduation" ceremony. The hotel manager introduced these two ladies who had retired a while back, but who loved to return for any kind of special occasion. They helped with the presentations.

It says something good about the culture of a business when retired employees like these two ladies and Lulu gladly return when given an opportunity.

There you have it! It's official, Jim was there. 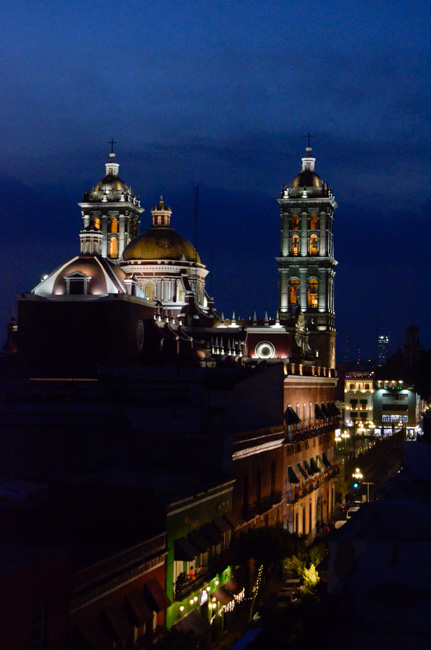 We enjoyed margaritas from the roof garden while watching the sunset and the lights coming on throughout the city.

The cathedral is gorgeous at night.