Unlike everywhere else we've visited so far, Puebla was not occupied prior to the Spanish conquest. It was a city planned "by the Spanish for the Spanish." 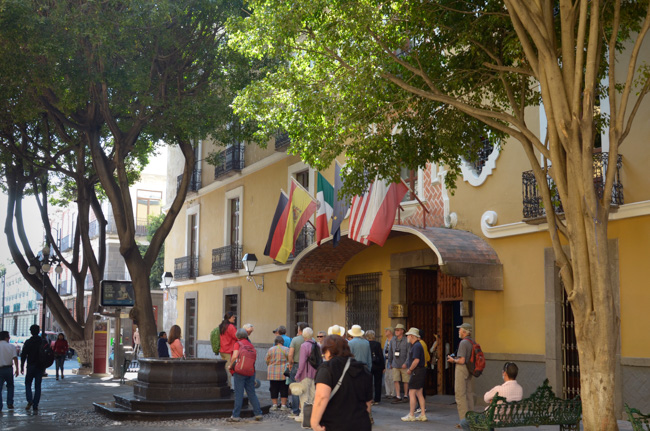 The charming Hotel Colonial de Puebla was in an old Jesuit monastery built in the 17th century. It has been an inn since the 18th century and a hotel & restaurant since the late 19th century.

Unfortunately it wasn't possible to get a good picture because of the narrowness of the pedestrian area between the hotel and the old cloister, which is now used by one of the universities, and the shady trees. 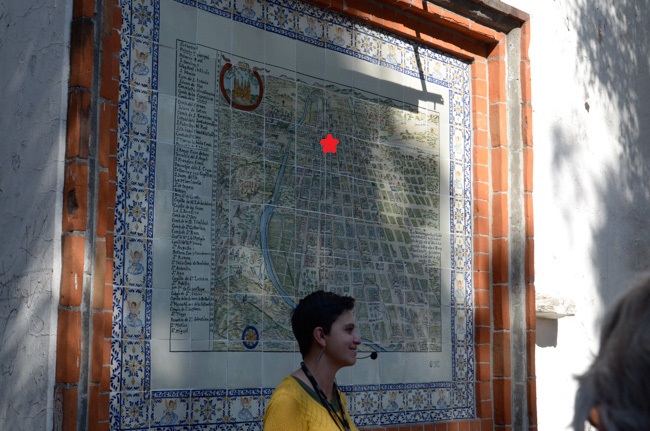 After getting our bags settled in the hotel, we met our local guide, Alejandra Rojas, who led us on a walk around the downtown area.

Our first stop was this ceramic map of the downtown. The grid-like blocks were the Spanish city. The river, which has since been paved over, divided the Spanish city from the area set aside for indigenous inhabitants. I don't recall if she said when the map was created, but it's not new.

I've added a red star to show about where we are. The map is oriented with the south towards the top.

The area covered by this map was designated a UNESCO World Heritage Site. 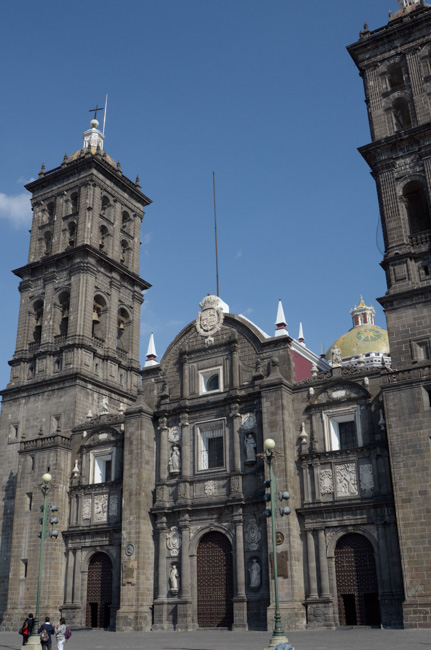 The Puebla Cathedral is dedicated to the Immaculate Conception, which is the conception of the Virgin Mary (not Jesus) without sin.

Although construction of the cathedral was started in 1575, it proceeded in fits & starts. It was consecrated in 1649, but the final tower wasn't completed until 1768.

There were three organs inside of varying ages. I have not been able to find anything online about the most recent one, but as I recall it was installed in either the late 20th or early 21st century. The choir area of the cathedral was closed with extensive scaffolding due to the September, 2017 earthquake.

Pictures were not allowed inside. Too bad, because it was beautiful and unusual.

The zócalo was next to the cathedral separated by a pedestrian area with fountains. 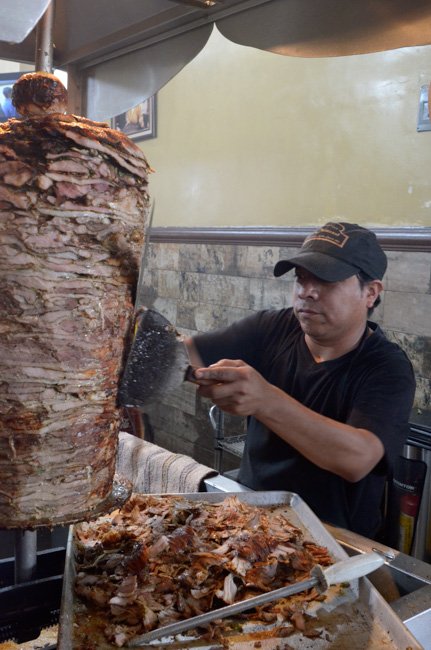 We never got to eat any, but we were at least introduced to a newish Mexican taste sensation: tacos al pastor. These are an evolution of shawarma brought to Mexico by Lebanese immigrants! In its new home pork has replaced lamb as the meat of choice. They sound delicious and if we ever get back....

Apparently the dish has begun migrating out of Mexico so perhaps it will come soon to a restaurant near you! 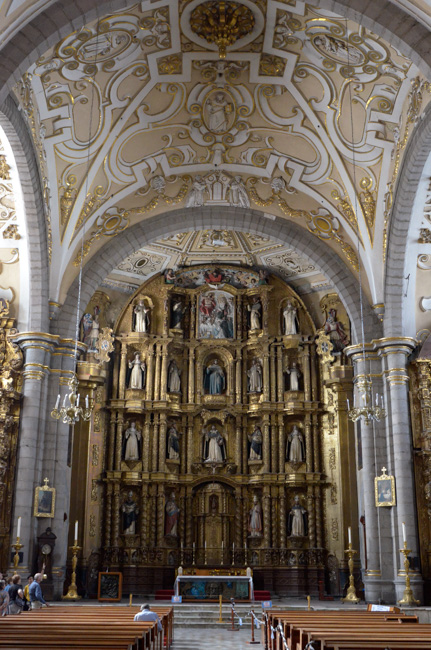 Our next stop was the Church of Santo Domingo. The church was completed in 1611, but the main attraction is the attached Rosary Chapel, completed in 1690. 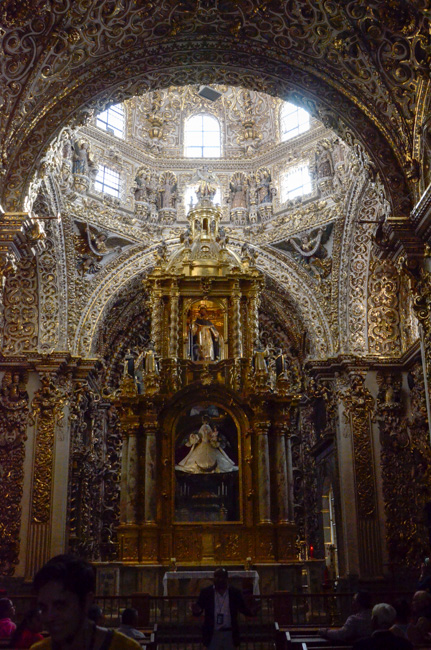 The chapel was intended to introduce and train the new converts how to pray the rosary. The ornate decoration is in the style called Mexican Baroque. The link has an extensive discussion of its origin and characteristics.

There are two figures in the altar: St. Dominic is the top one and Mary, holding the baby Jesus, is the lower one. 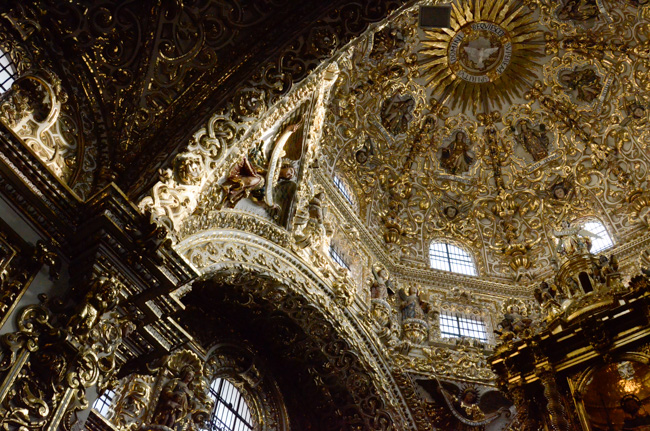 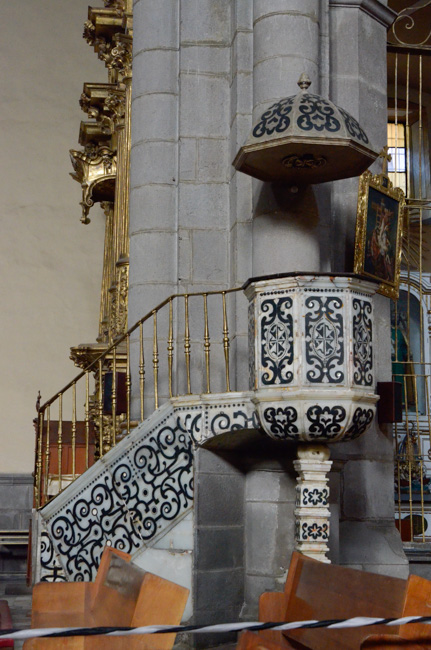 The pulpit of the sanctuary is made of onyx, as is the floor. 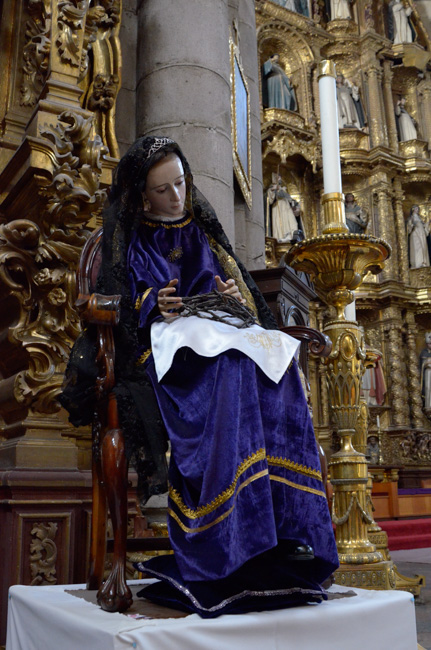 This pensive figure of Mary, holding what I take to be the crown of thorns, is located next to the sanctuary's altar. I wonder if it is related to the Lenten season since it didn't look like something that is always there.

Many of the churches that we visited had an extremely gory figure of Jesus either on the cross or lying in state, at it were. We were told that this was an adaptation of the scourging and crucifixion of Jesus to the tradition among many native peoples of human sacrifice and blood-letting needed to propel the sun through the sky on its daily journey. The Aztec traditions were just one tradition among many.

The Spanish priests explained that Jesus' death and resurrection were the final sacrifice to connect to the native traditions. This struck an instant chord with the people. 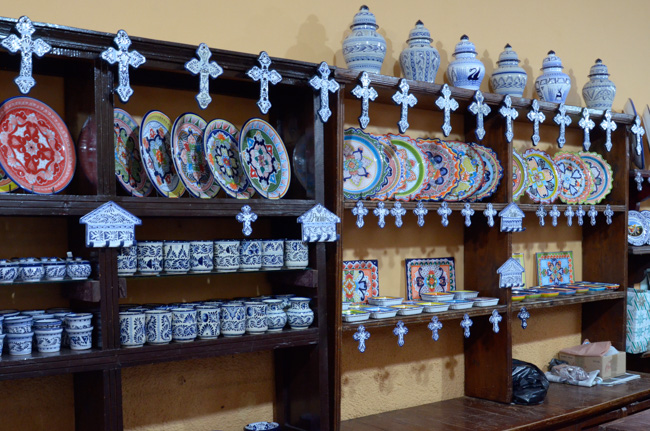 We were not aware that candy is a particular tradition in Puebla. In fact there is a downtown street that is dedicated to candy stores and it was just down the road from our hotel. Thankfully neither Jim nor I are candy fans!

The store we visited also sold some of the local talavera pottery, although they are apparently not a certified maker. 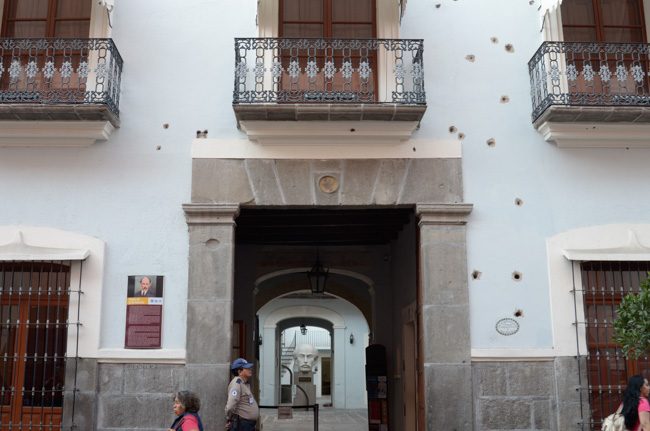 We did not visit the Museum of the Revolution as a group, but our guide pointed it out and explained its significance. This was the home of the Serdán family, who were players in the pending revolt against the dictatorship of Porfirio Díaz. Their conspiracy was discovered two days before the planned uprising. The home was raided and the family killed. For that reason it is considered that the first shots of the 1910 Mexican Revolution were fired here.

The pock marks in the facade are supposed to be marks from the bullets. 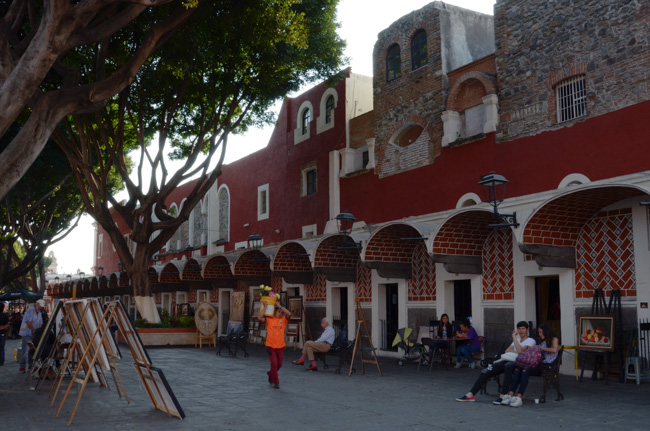 Our final stop was the artists' quarter, which was established in an old market.

Each of the small storefronts housed an artist and his work. Art displays and artists spilled into the pedestrian mall.

After our walk we had some time to unpack before walking to a local restaurant for dinner. The food was good and the stroll back by the cathedral, which was all lit up, was lovely. Although most returned directly to the hotel, some continued to explore the city, which was vibrant that evening.