I hadn't given much thought to the long bus ride to Puebla until our guide at the Ethnobotanical Garden mentioned the Tehuacán-Cuicatlán Biosphere Reserve that we would be traversing. We had also received a lot of information in our lectures and the pre-trip reading about environmental changes since the conquest and we'd be getting an opportunity to observe some of that -- albeit from the window of a speeding bus!

We will be traveling through the Mixteca region, one of the poorest in Mexico. There is an extensive discussion of the environmental degradation and the success of various restoration efforts at the link. The work has been spearheaded by an organization known as CEDICAM. This organization's leader, Jesús León Santos, received the Goldman Environmental Prize in 2008. 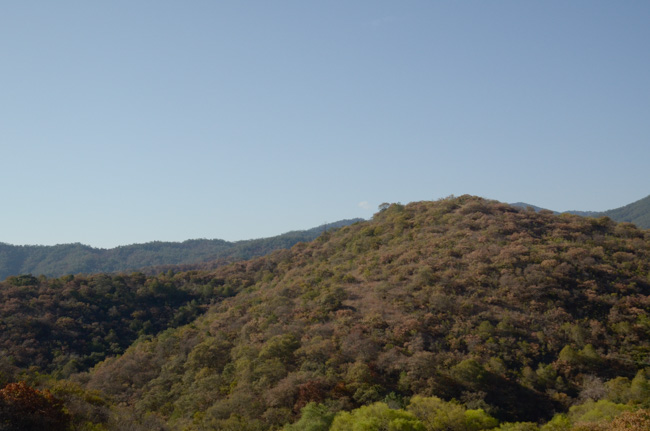 Prior to the introduction of sheep and goats (and cattle, to a lesser extent), the hills surrounding the Oaxaca valley were covered with scrub forest like this that limited erosion and allowed the seasonal rains to soak into the soil. This fed year-round rivers and streams.

The areas of Mexico that we are visiting fall into either the "semi-arid" or "temperate with dry winters" climate zones. Since we are in the dry season much of the vegetation is dormant.

This is similar topography, but the land has been cleared and overgrazed. 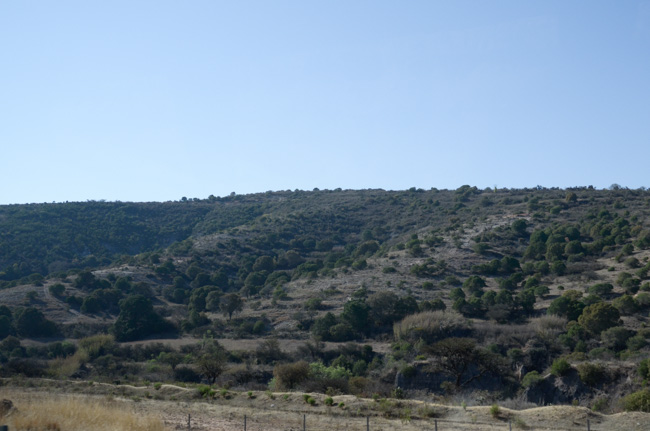 We had been told that some areas are putting in terraces and planting trees and vegetation to capture water and I had an eye out for them. Unfortunately we had almost driven past before I could grab my camera. The terraces are in the swale marked by the darker green and denser vegetation. 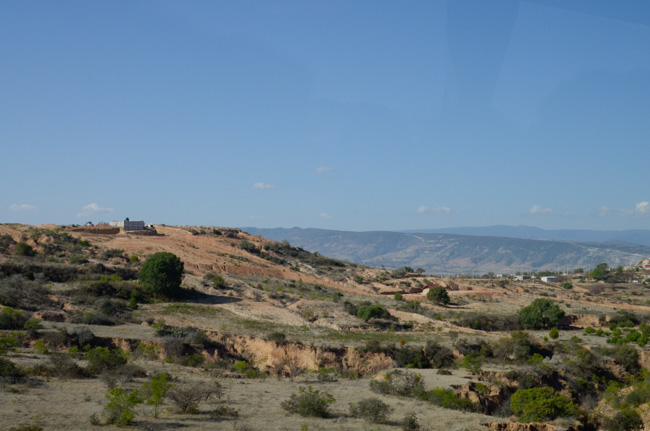 This is what erosion looks like when it has gotten out of hand. This kind of damage will be difficult to reclaim. There is nothing to stop heavy rains from simply running off into the gullies and away. It will not soak in and nourish the land here and there is danger of significant flooding downstream. 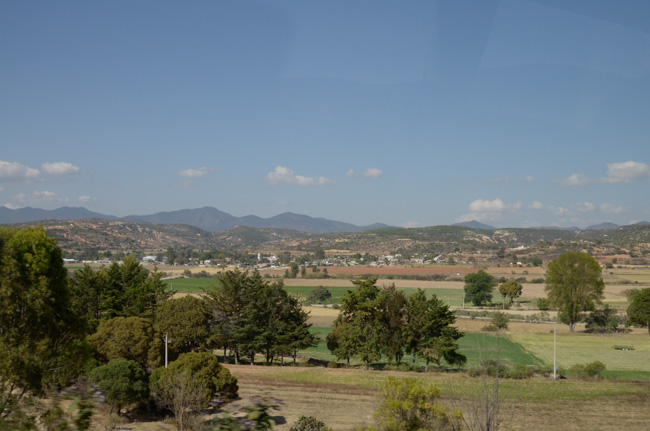 We also passed better looking farmland. I obviously can't tell from the bus whether this land has benefitted from the improved fertilization and other agricultural improvements introduced by CEDICAM, but it certainly looks more productive than the eroded landscape shown above. 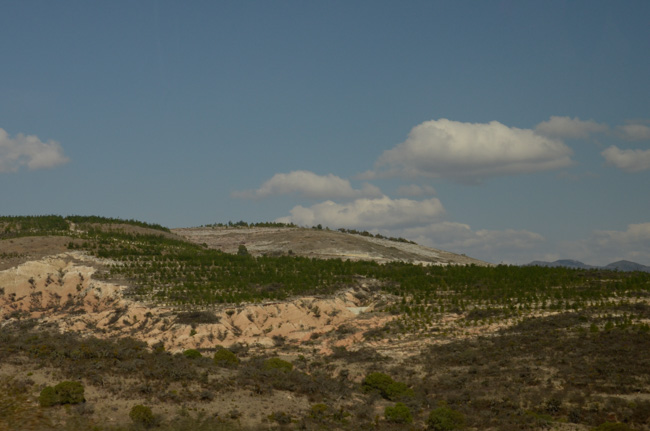 This area will receive long-term benefits from a reforestation project. There were several such along the way. Apparently reforestation was the hardest sell of the various improvements because it IS such a long-term investment, but it is key to success.

One of my cousins has done extensive mission work in Haiti with an organization that emphasizes watershed restoration. He has a motto: save a tree -- eat a goat today!

We are now entering the semi-arid highlands on the border between Oaxaca and Puebla. We really appreciated Tonio's expert guidance of the bus around hairpin curves. The road appeared to be relatively new. There were occasional glimpses of an old roadbed that made my hair curl even more than normal!

We have reached the Biosphere Reserve mentioned above. The hills are covered with mesquite and organ pipe cactus as well as other kinds of vegetation. 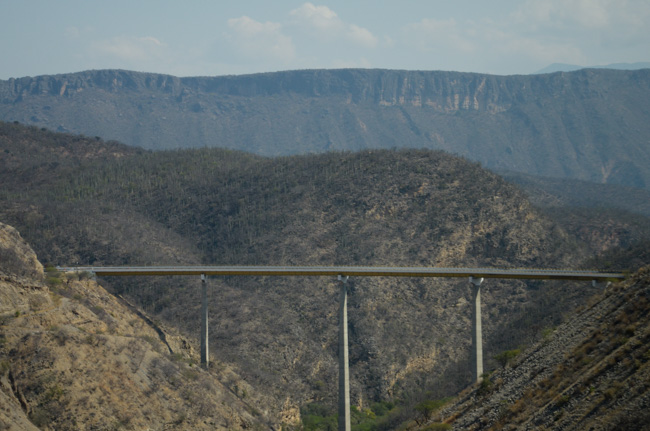 We will be crossing from Oaxaca into Puebla on this high bridge. 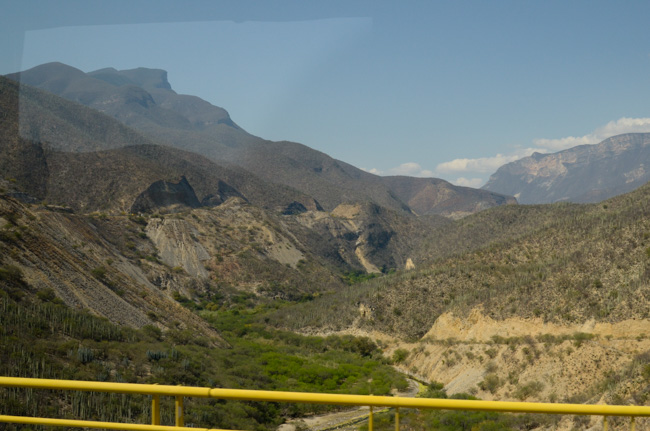 The view from the bridge back along the canyon marking the border shows how the highway has been carved out of the mountainside on the left.

This cactus "forest" is part of the Biosphere Reserve. 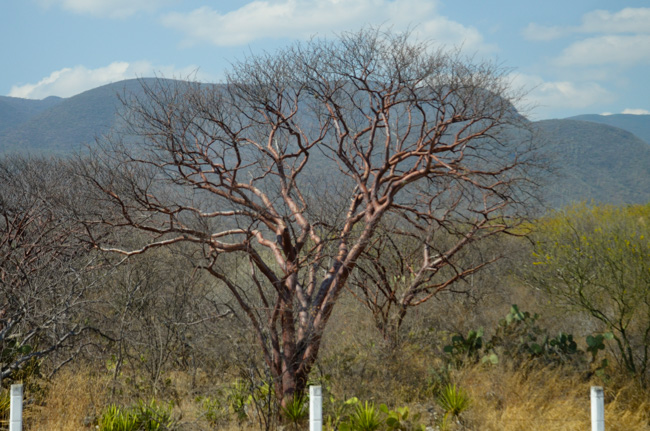 Another tree with peeling bark similar to the ones we saw at the Ethnobotanical garden. 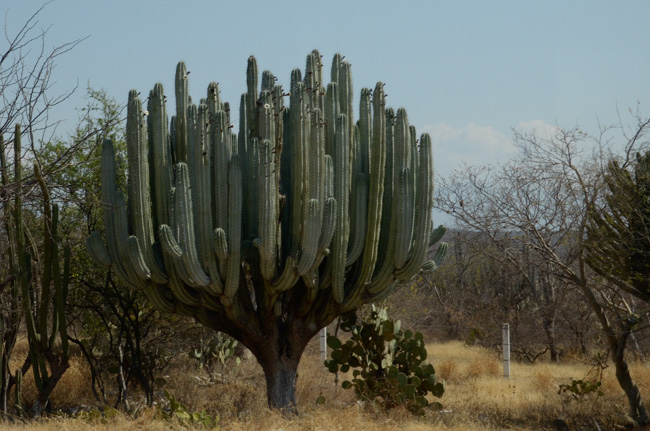 We stopped to see a larger "candelabra" cactus (world record as I recall), but I thought this one was prettier. 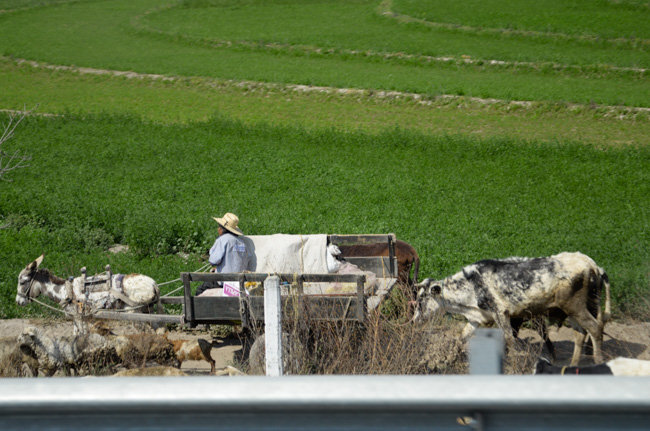 A view of a farmer with his donkey cart and cattle. This was not a typical sight, but it was picturesque.

We did see a number of farmers using horses to plow their fields. In other places there was standard farm equipment. Haydee told me that many villages form co-operatives to buy tractors and related equipment that would be too expensive for the individual small farmers.

All of these fields were irrigated. 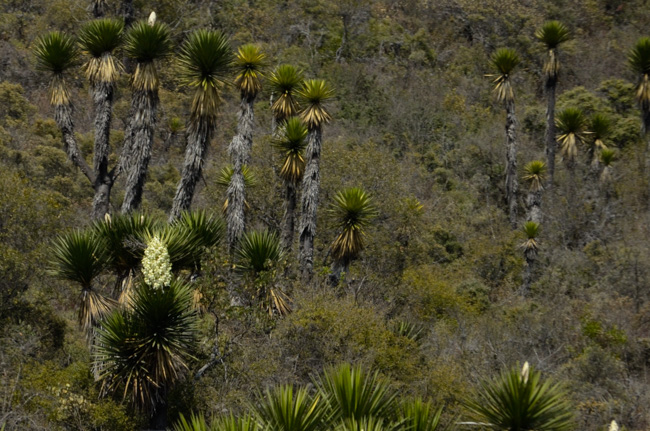 In addition to the many cactus and mesquite plants, these yuccas were common. The flowers, however, were not so common. I took many (MANY!) pictures trying to get a decent one from our speeding bus and this was the best of the litter.

I believe it is Yucca periculosa.

The native Virginia yuccas have a similar flower, but they don't grow into trees! 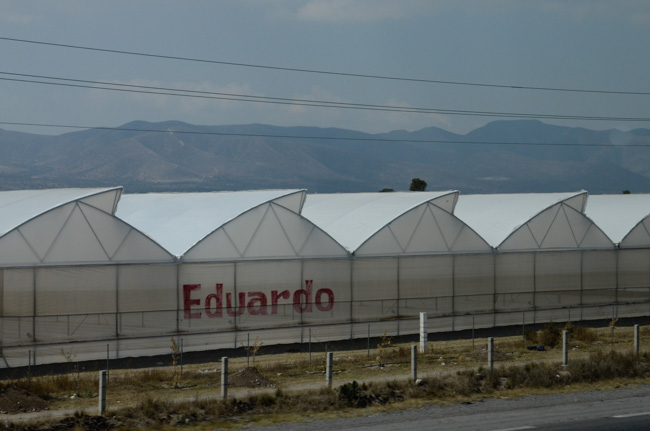 Throughout our travels in Mexico we saw these greenhouses with unusual (to us Norte Americanos) tops. My best guess is that they are passive ventilation systems. I'll bet the pointy tops face away from the prevailing winds. 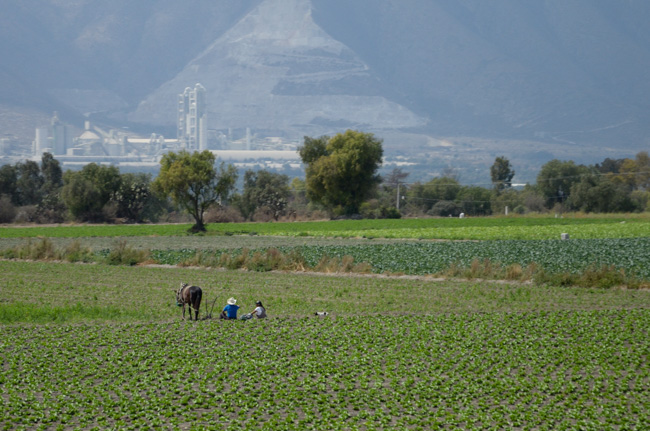 The contrast of the huge industrial complex (cement factory? refinery?) in the background and the family with the horse-drawn plow in the fields appealed to me.