We started our last day in Oaxaca with a lecture on Oaxacan holiday specialty cuisine, which varies a lot from family to family and town to town. Since each town has a patron saint, and each family member has a birthday, and there are also national and civic holidays ... there is plenty of opportunity to celebrate! After the lecture we had the entire day on our own until dinner, which we would celebrate as a group. 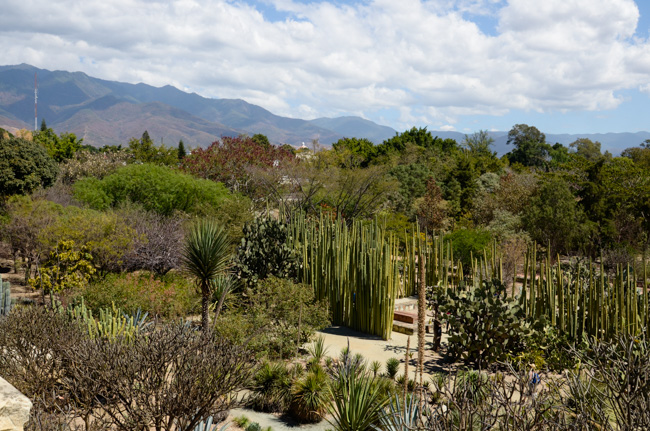 This overview of the Ethnobotanical Garden from the Oaxacan Cultural Museum was taken from the Oaxacan Cultural Center the first day. The land had originally been part of the monastery and then later a dump and shooting range for the military. After the military returned the property to the local government it was used as a construction site while the church and cloister buildings were being restored.

I immediately put visiting this garden on my "must do" list!

The history of the garden, which is only about 20 years old, can be found at the above link. I was horrified to learn that the city had wanted to use the space for a hotel, convention center, and parking lot. Thankfully they made a better choice! 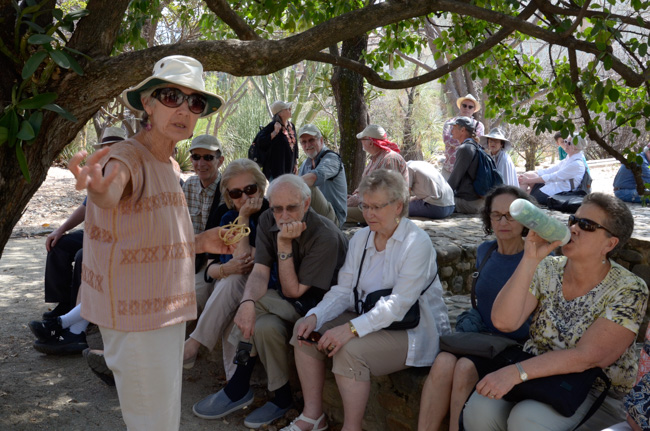 The garden had suffered from plant thieves and people who had little respect for the plants so now access is only by formal tours. We were dismayed to hear that the only English tour that could accommodate our schedule was "sold out." It turns out that something was lost in translation. I'm thankful that we showed up anyway, very early, to stand in line and secure a space. As it happened, there don't appear to be any limits on the number of participants.

Our docent, shown here, was very knowledgeable and informative.

One section of the garden was devoted to food plants.

The oldest evidence in the new world of domesticated plants was found near Oaxaca. They were squash seeds and corn cobs.

The squash fruits and squash blossoms are both used for cooking. 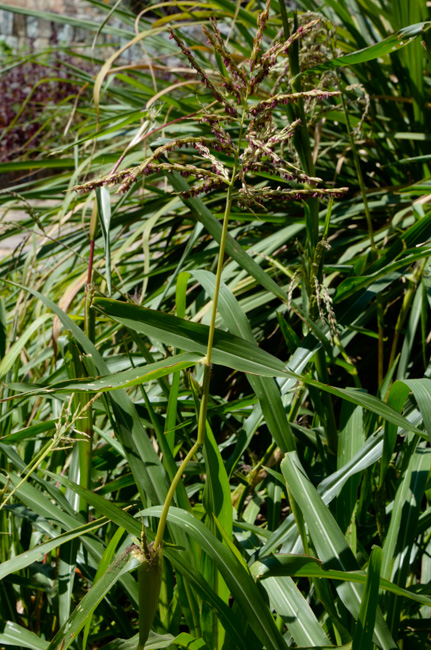 The ancestor of domestic corn is the teosinte plant. It is a member of the grass family, which is pretty obvious here.

Unlike modern corn, which has only one stalk and no more than two or three ears per stalk, teosinte has multiple stalks and can have a seed pod at each node.

The inflorescence at the top of the plant is also much more obviously  flower-like with small magenta blooms.

The seeds of the ancestral plant are not yet formed into cobs, but they do have the distinctive tassels of modern corn. Because the seeds aren't anchored to a cob and completely enveloped in a husk, they are capable of reseeding. As the seeds mature and the plant withers and dies, the seeds fall to the ground to become new plants in season. Modern corn relies on humans to propagate it. If a cornstalk falls to the ground, the seeds are unable to reach the ground to start a new life cycle. 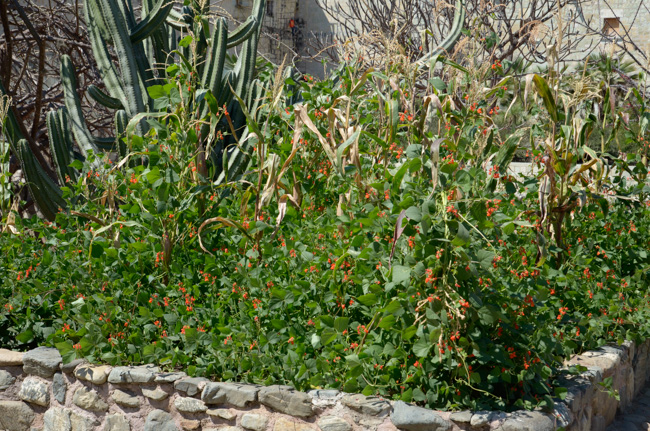 These unruly bean plants have been planted with corn, which at present has passed its prime. The fashion of planting corns, beans and squash together had spread as far as New England by the time that area was settled by Europeans. They were called the Three Sisters. 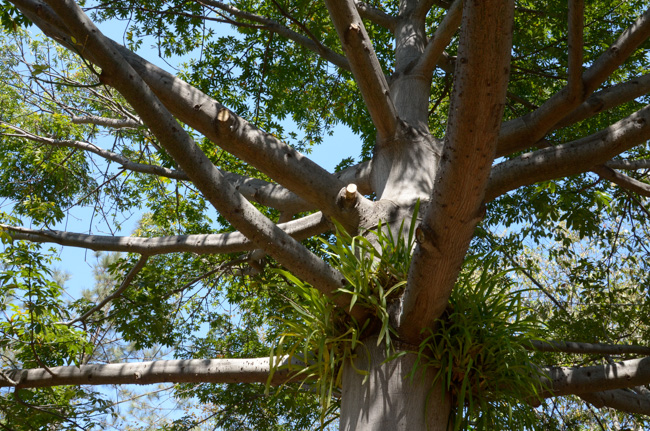 Our next stop in the garden was the area dedicated to plants that need a warm humid environment. This kapok tree was the largest individual. Although the garden is quite young, many of the larger trees were transplanted when they already had good growth.

The kapok is noted for its spiny bark and the horizontal arrangement of its branches. The tree produces a pod filled with cottony fluff that was once used for life-jackets and stuffing for mattresses and pillows. The plant has many other uses as well. 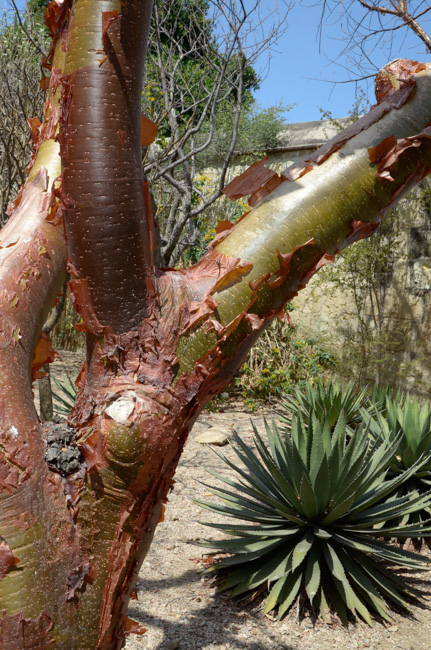 From the "wet" section of the garden, we walked to the dry side of the garden. There was a grove of several related trees, many of which featured this dramatic peeling bark. I believe these are Bursera trees, which are related to the frankincense family of Asia. I keep meaning to take better notes, but I never do so. The WWW has got me spoiled.

There were a number of related trees in this grove -- not all of which had the distinctive peeling bark. 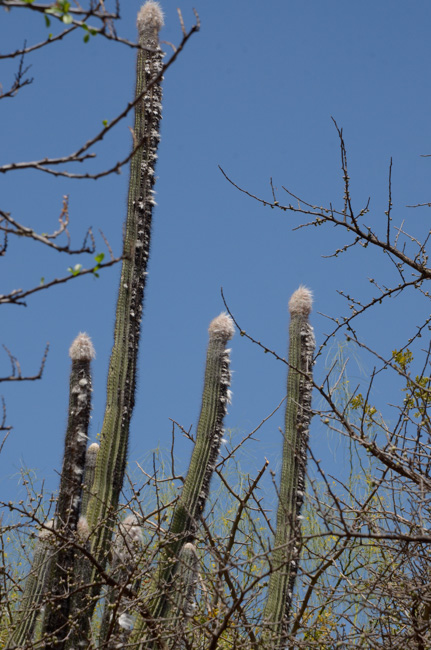 The WWW has left me cold with this cactus though. I like the hairy "hats" and the white tufts on the side. Apparently such "decorations" help protect against heat. 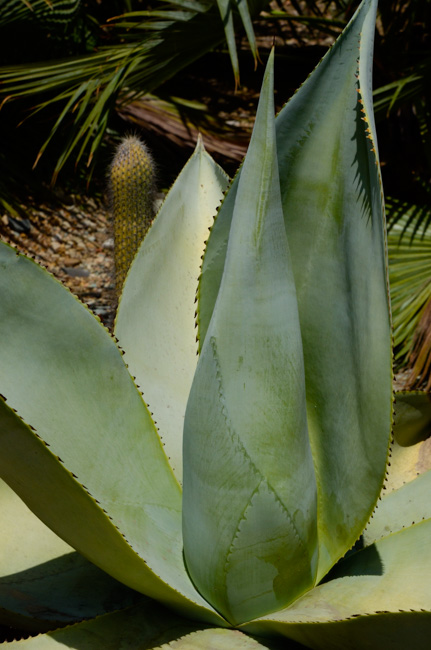 There were a number of magueys planted together. They have a wonderful sculptural form. 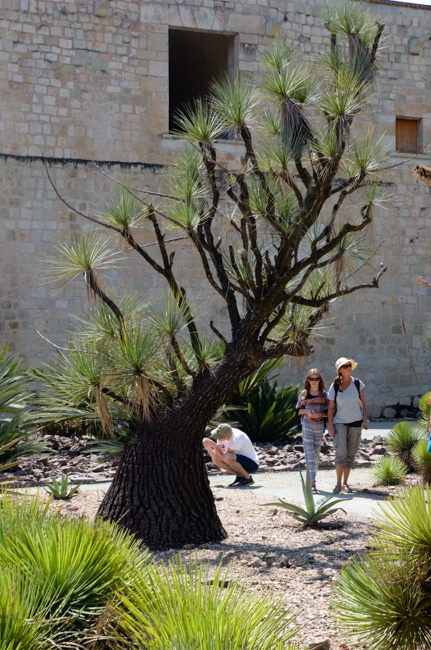 Heaven only knows what this tree is, but what a wonderful shape!

Although I've not been able to find out what it is, it looks like a kind of pine. 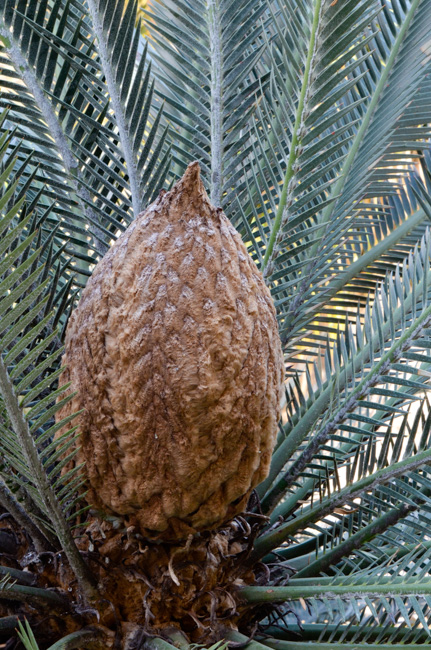 The designers of the garden didn't want to have labels disrupting the views, but it is frustrating not being able to identify plants. I do remember our guide pointing out that this is a cycad.

They are very ancient plants and Mexico is home to almost a quarter of the known species.

There isn't enough space to include all the wonderful plants in this garden.

After the tour several of us met at La Olla for lunch. A couple of us were initially disappointed that our chosen entree had been sold out, but later elated to hear that the kitchen would make up some more for us. Plus as a consolation we were given an extra serving of guacamole! We knew we liked this restaurant! 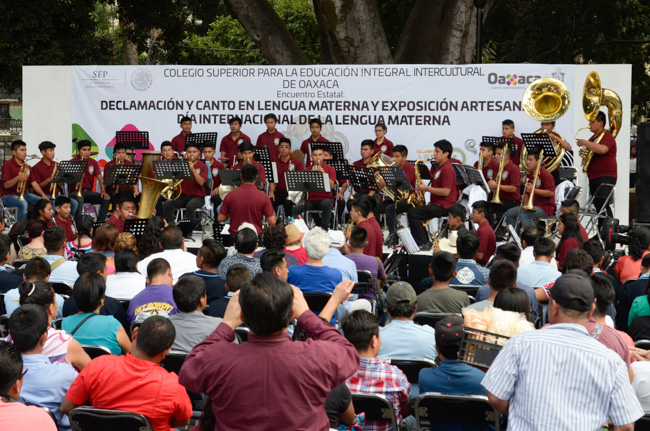 After lunch we walked down to the zocalo to the post office to buy stamps. Across the way we passed this youth band. In addition there were a number of young women in traditional costumes seemingly waiting their turn to perform. The sign indicates that it is an exposition of recitations and songs in the "mother tongue" as well as handicrafts. The audience was enthusiastic. There were a number of booths set up in front of the post office with the handicrafts on display.

I expect the "mother tongue" was Zapotec or other native languages still spoken in the region. 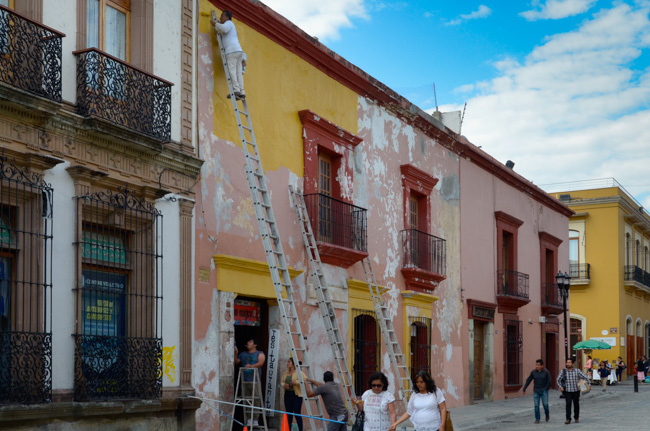 Over the week that we were here we had passed this building under renovation many times. First there was scraping of old paint. Then there was patching. Now there was painting. I had to take a picture. Later in the day when we returned on our way to dinner, we noted that about half the facade had been completed.

Painters here and elsewhere in Oaxaca worked in teams. One man would paint and the other would stabilize the ladder, which was sometimes extended to its maximum length. I was glad to see it. 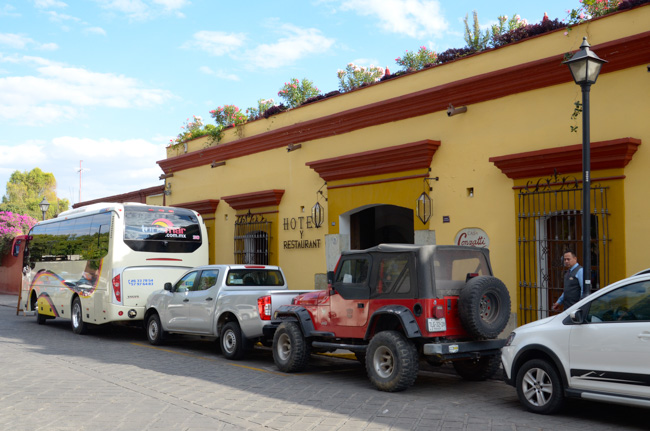 This was our last day in Oaxaca and I finally got a picture of the hotel. It was a great place. The bus is our very own Road Scholar bus.

That night we all gathered at El Asador Vasco for dinner overlooking the Zocalo. The link takes a while to download, but it has some nice video of the area. It was a fitting farewell to this lovely city.