Oaxaca & Puebla – Seasons of My Heart

The next day saw us off to another cooking class. Seasons of My Heart is large enough that we didn't have to divide into our two groups. It is located to the north of Oaxaca in San Lorenzo Cacaotepec. (This was another example of a village having a "first name" after a saint and a "last name" given by the indigenous people.) Our bus successfully navigated the village streets and the dirt road into the country, but was stymied by the tight turns leading to the school. He eventually tried backing in, but only made it to a point where we could all get out and walk the rest of the way. 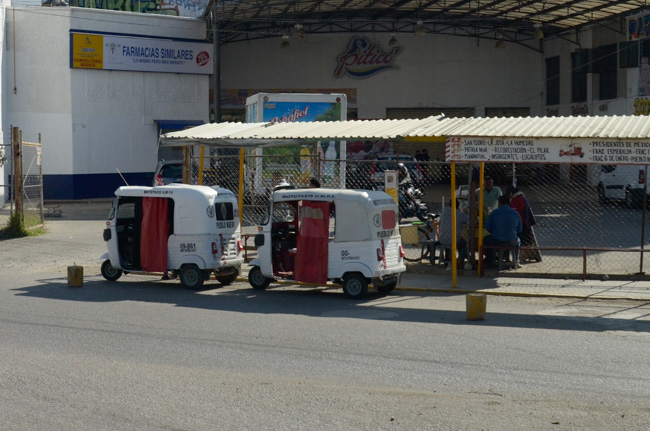 We saw these little three-wheeled taxis everywhere in the smaller towns and occasionally in Oaxaca as well.

As we traveled to our class, there was a small local taxi following us and waiting patiently for the bus to jockey around in its attempt to get to the cooking school. It turned out that the passenger was one of our presenters! 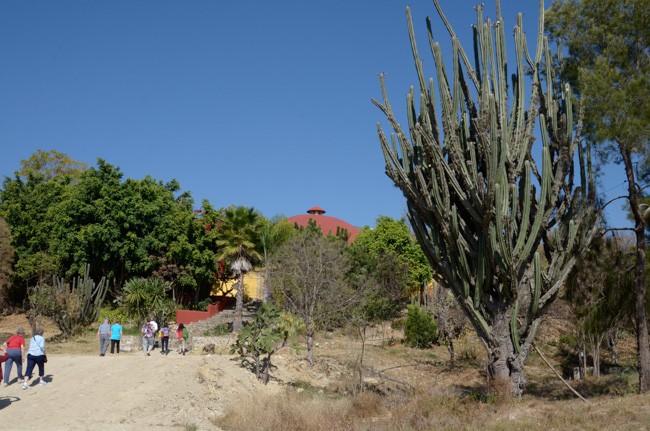 The school was the dome-shaped building in the trees. We didn't mind the extra hike up.

The inside was filled with whimsical touches, brilliant colors, and decorations.

The bathroom was truly amazing, but I didn't take my camera. The lizard at Barcelona's Parc Guell would be envious! 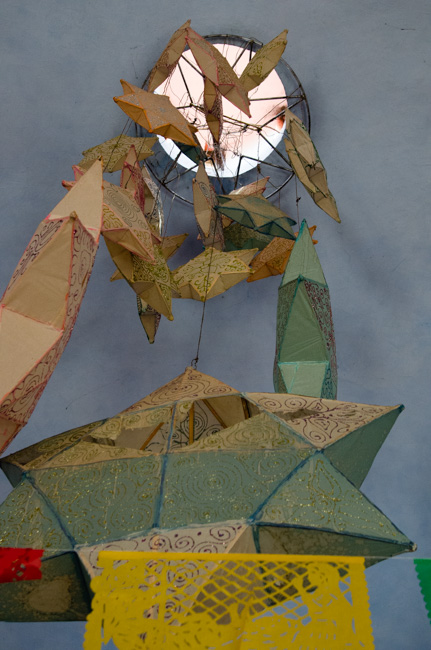 The constellation of stars hanging from the cupola gently swayed in the air currents. 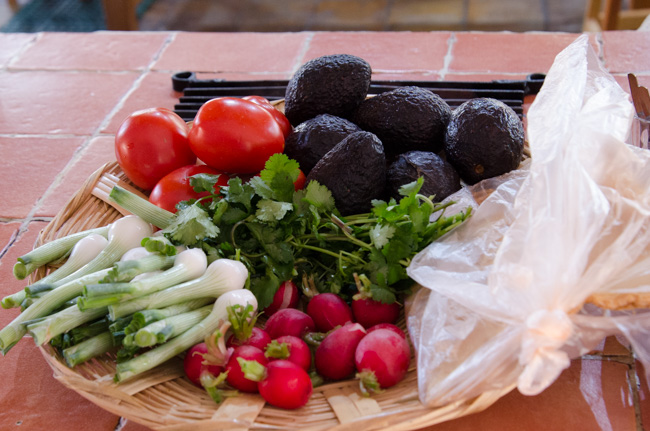 But we were here to cook. Even the trays of ingredients for the various dishes were colorfully arranged.

First, however, we were treated to a cheese-making demonstration. Susana Trilling, the owner of Seasons of My Heart, is explaining the process used by Rora Matadamas to make queso fresco. Although here it is made with raw milk still warm from the cow, it is possible to make it using pasteurized whole milk. Once the curds are formed, they are strained in cheesecloth and pressed to remove all the whey.

The cheese is pressed into molds woven from rushes. It can either be used immediately or aged briefly. We would be using both the fresh cheese and the same cheese that had been aged one day.

A further step in making the cheese is to knead the curds until they begin to coalesce and then pull them into long ropes. We were each given a piece to experiment on (hence no pictures) and it was a lot harder than it looked. Once the cheese is pulled, it cannot be smooshed back together again to start over. When Rosa did it, she made long ropes where are then rolled into the balls of Oaxaca string cheese. It was delicious.

The balls can be tightly wrapped in plastic and will keep quite a while. Haydee, our guide, had dibs on three of the balls to take home with her. They made the rest of the trip with us!

If you are unable to find a source for these cheeses and don't fancy making them yourself we were told that a good mail-order source for similar products is The Mozzarella Company in Texas. Years ago we saw a presentation by the owner, who graduated from the same college I did, at the Smithsonian, and I'm happy to put in a plug for those cheeses. 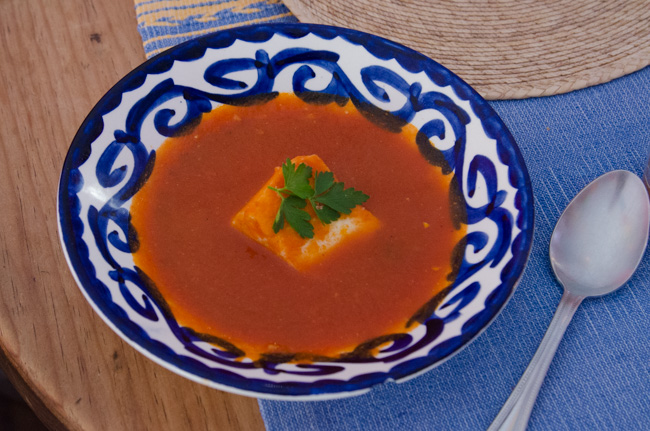 After the demonstration we had a light lunch of yesterday's cheese in tomato sauce. Yum!

Thus fortified we formed teams to prepare our evening meal. I signed up for the team making Tetelas de Juxtlahuaca. It was a good choice because, although some of the other teams had time on their hands, the four members of our team were running full on for the entire afternoon. We had to make the bean paste, the tortillas, the salsa (including roasting and peeling the tomatoes and chiles) all as separate steps.

At critical times in all the recipes, the entire group was given the opportunity for hands on. The most interesting exercise was wrapping the marinated chicken in banana leaves prior to steaming.

And THEN we had to cook them. And plate them.

We won't be able to reproduce this large outdoor wood-fired comal at home for sure! Laura is careful not to get her fingers scortched.

Thankfully we were all able to keep our energy up with infusions of good Mexican beer throughout the afternoon! 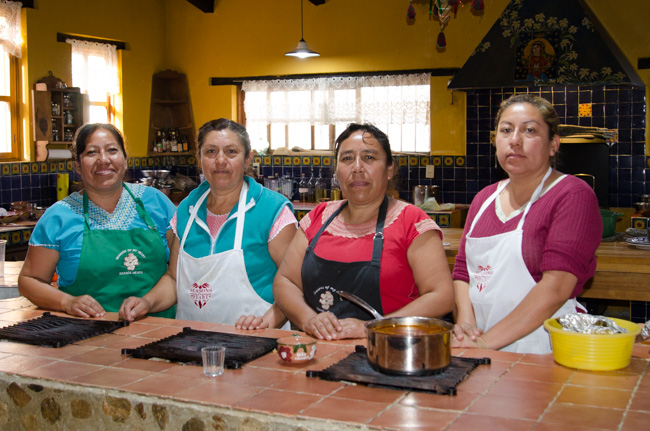 All of the teams had help and guidance from Susana's excellent staff or everything would have taken much longer still. 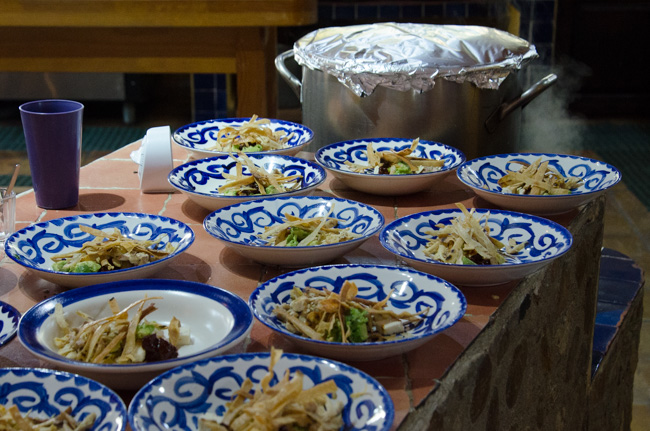 We had tortilla soup several times during our stay in Mexico although this was my favorite. This is a perfect way to use up left-over tortillas. There are a million recipes out on the WWW. The recipe distributed at the school didn't use black bean paste, but the one we prepared and served did. Hmmm.

I'm a sucker for bread pudding so I had to include this. Especially since it is really a Cajun recipe adapted to local ingredients -- like squash and mezcal. Yummy! 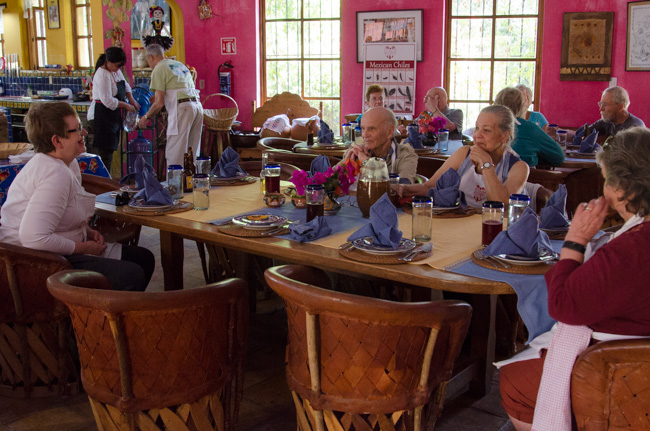 Happy cooks waiting to be fed!

Several of the group had reservations at one of the downtown restaurants for dinner, but most of us were too stuffed after our four-course meal. The participants kept dwindling until I think it was only a couple of determined diners who made it out.

Somehow or the other, Tonio, our intrepid bus driver had managed to get the bus turned around and into the driveway to take us home. It was a beautiful afternoon drive through the Etla Valley back to Oaxaca.

As we reentered Oaxaca city we had a last glimpse of the site of Monte Alban. It's hard to identify it from this picture, but it's there.