Monte Alban is the best known ancient site in Oaxaca. Together with the historic center of the city of Oaxaca, it is a UNESCO World Heritage Site. 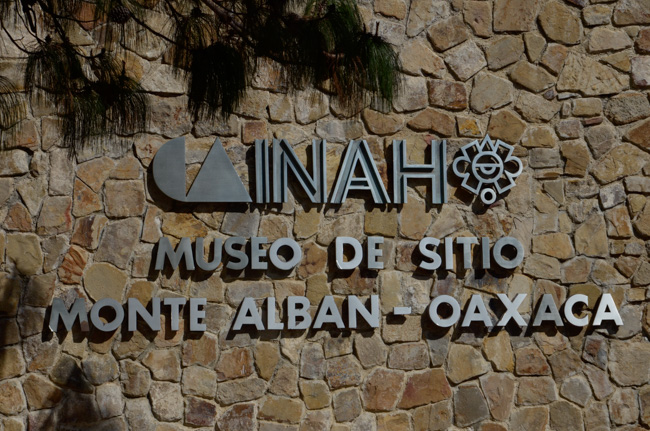 The National Institute of Anthropology and History is the agency that regulates and protects Mexico's cultural history. 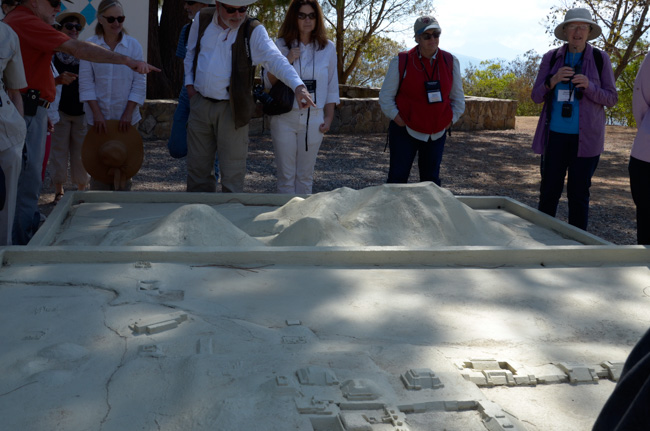 We started our tour at this scale model of the site. The mountain in the background on the right is our destination. The flat top was excavated beginning about 500 BC. Mesoamericans lacked metal tools so the work was done with stone tools.

This massive earthwork and subsequent construction was done without draft animals or the use of wheeled vehicles. There were no suitable animals in the area to use as beasts of burden and although the concept of the wheel was known, it was not used for a variety of reasons -- not so much as for a wheelbarrow. 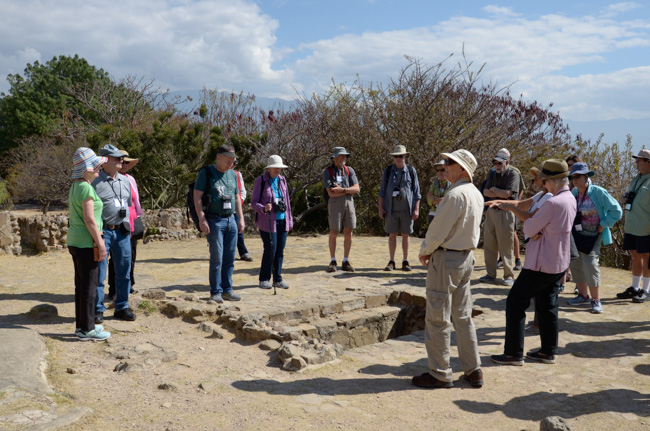 Our first stop was at the remains of a residential complex. The Zapotec buried their family members under their courtyards. It was a way of keeping close to their ancestors. I've had trouble finding good sites on the Zapotecs, but this one from the Field Museum describes their burial practices, among other things. Most resources on the WWW are about those Johnny-come-lately groups the Maya and the Aztecs! 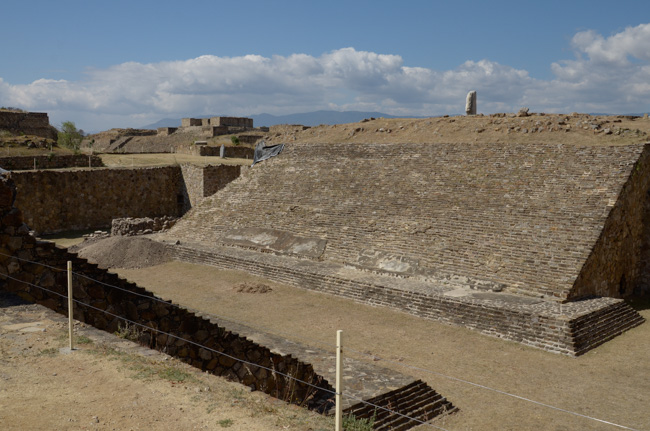 The ball court was our next stop. The Mesoamerican ball game was wide-spread and probably had a ritual component. In some cultures it was associated with human sacrifice, but this is not believed to be the case at Monte Alban. There were more ball courts located at Monte Alban. This one has been dated to c. 100 BC.

In its day, the sloping sides would have been stuccoed.

The September 2017 earthquake damaged various structures at Monte Alban including the ball court. Some repair materials can be seen at the left of the image and a significant portion of the far end wall has collapsed. It was only the reconstructed part that was damaged. The original Zapotec construction was compartmentalized to survive -- and it still survives today! 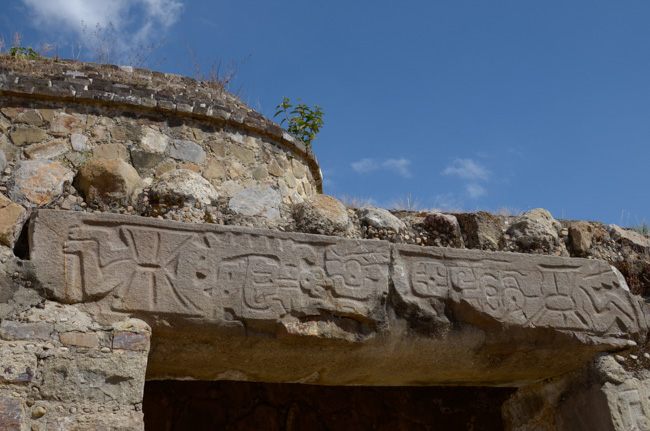 Much of Monte Alban has been reconstructed. This picture shows an example. Any place with small pebbles set into the mortar, which is pretty much everywhere in this image, is a reconstruction.

The carved lintel is original. Remember that the Zapotecs had no metal tools, so all carving was done with stone tools.

Although this may look like one large building in the center of the large plaza, it is really three, which are cleverly called buildings G, H & I.

As I recall, G & I, the two end buildings, were built first with the connecting portion added later. There is a lot of speculation on exactly how these structures were used. There is agreement that they were platforms for more perishable structures, temples or something else, located on top.

A pyramid by definition has a pointy top. The Egyptian pyramids had pointy tops because they were tombs and never intended to have any other use. Mesoamerican "pyramids," all of which had flat tops and were topped by other structures, are "pyramid-like" structures. 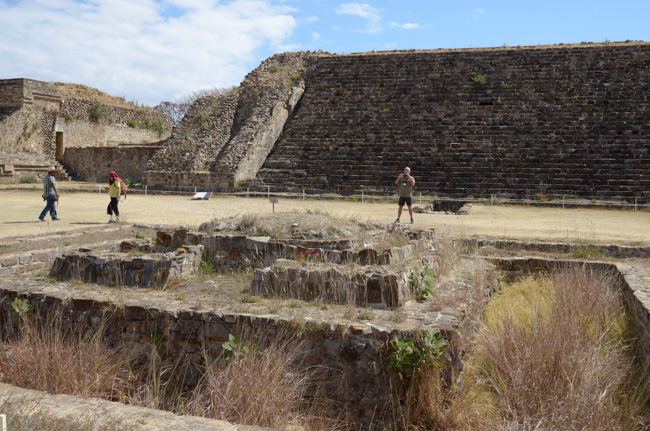 Archaeologists believe the foreground structure was an altar of some kind. It is situated between Building H and Building P, which can be seen in the background. Tunnels connecting the two buildings might have allowed the priest to disappear in one location and "magically" appear in the other, but this is speculation. 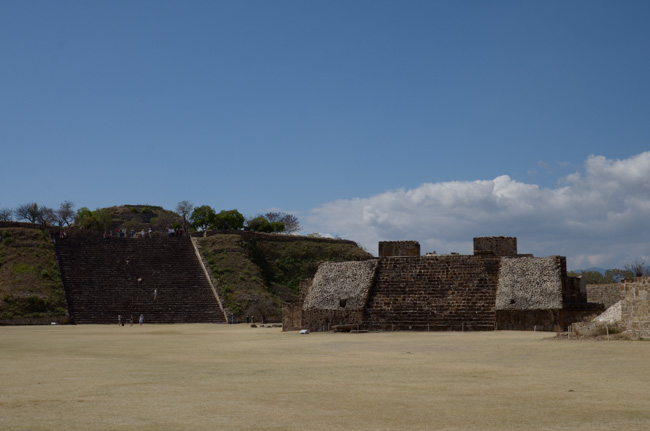 All of the structures at Monte Alban are sited by the cardinal points (N-S-E-W) except the one here in the foreground. It is prosaically called Building J, but interpreters believe it is an astronomical observatory. The information at the link shows some of the alignments that were explained to us and speculates on how they might have affected the building of Monte Alban at a spectacularly inappropriate location for a city: no water, no place to grow food, etc. 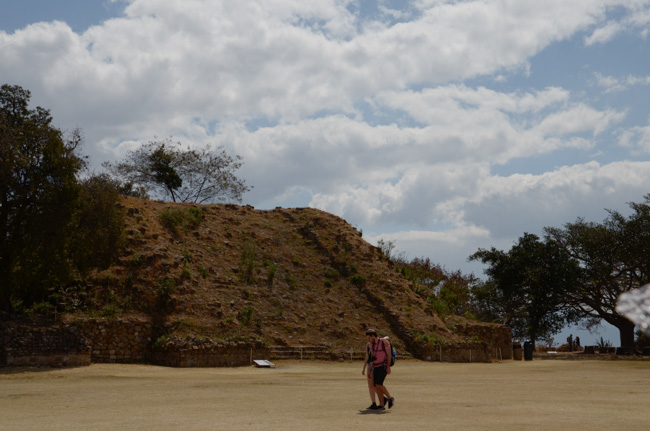 This structure has been left unexcavated to illustrate how the site looked prior to extensive reconstruction. Quite a difference! 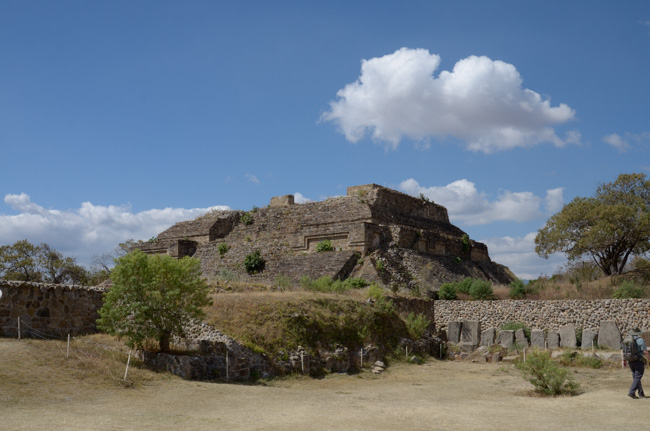 We did not visit the structure in the background. I've included this picture to show the location of the danzante stones.

The origin and purpose of these stones is mysterious. They were once thought to be depictions of dancers, hence the name. The most popular theory, which is the one documented on material at the site, is that they represent tortured and sacrificed prisoners of war. There is another theory that they represent abnormal medical conditions. I found a site that describes this latter notion. It wanders off into pseudoscience weeds towards the end, but it does summarize the "medical theory." 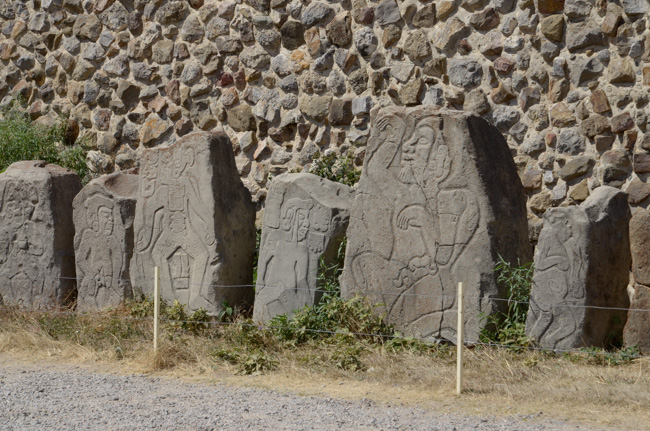 The stones on display are reproductions. The originals are located in museums here and elsewhere. 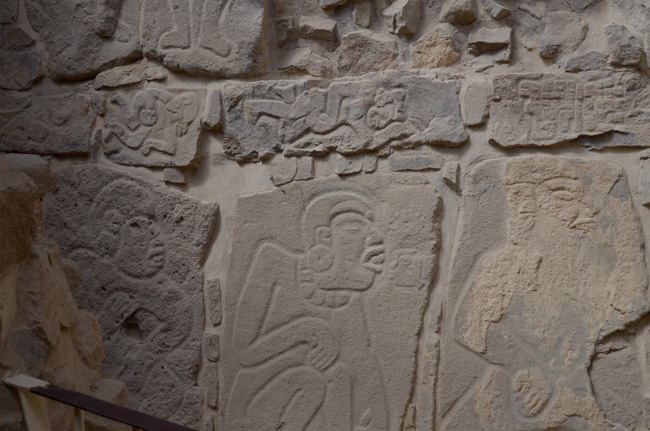 In addition to the free-standing stones above, there were a number set into the wall of an adjacent building. The horizontal carving layer contains "swimmers." 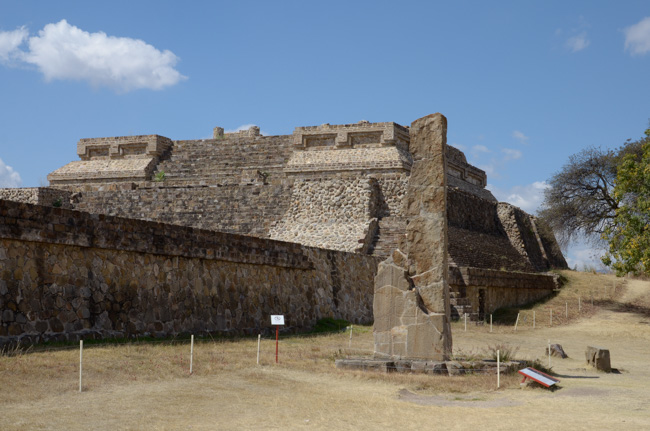 This stele is one of the oldest structures at Monte Alban. Its orientation and inscriptions suggest an astronomical purpose. Unfortunately the Zapotec writing has not yet been deciphered. Too many of the codices were destroyed by the invaders. 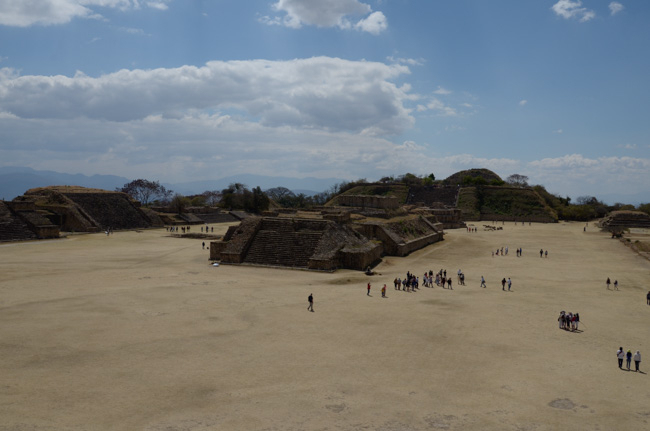 An overview of the main plaza provides a sense of perspective.

Don't forget the entire plaza was manually excavated into the mountaintop!

I'm taking this picture from the North Platform. Historians believed that the ruler or high priest used this location to address the people. The acoustics are such that it may have been possible that he could have been heard over this large space. 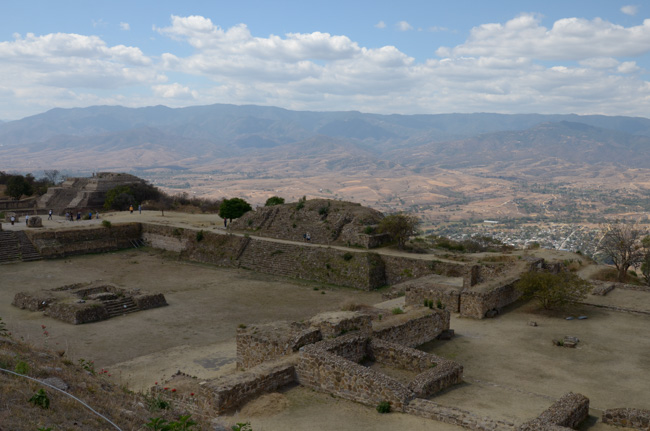 This smaller amphitheater is excavated into the North Platform. It also has acoustic properties that allow a speaker on the central platform to be heard by spectators around the edge.

Experts think that commoners gathered in the large plaza above and this intimate setting was used by the nobility.

This picture is taken from the highest platform that we were allowed to ascend. There is only one higher and it had been damaged by the earlier earthquake so was cordoned off. 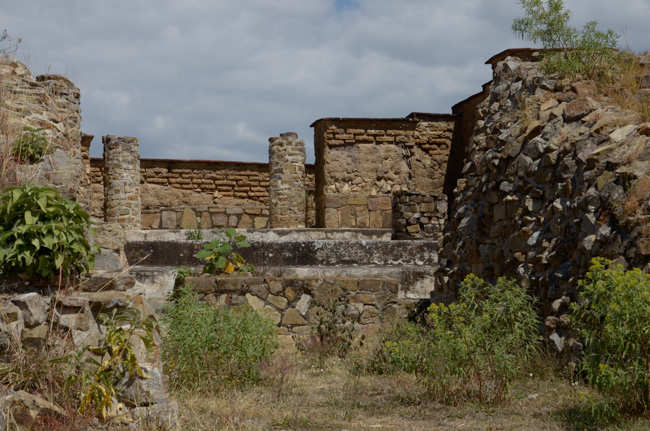 As we returned to the entrance, we passed "building X." It was a common custom of the indigenous people to build over top of existing structures. A small temple was incorporated into a later temple platform. Excavation of the larger structure unearthed the original work preserved within it.

The stone work and adobe brick are original. The only things that have been added are the caps on top of the bricks to protect them from rain. 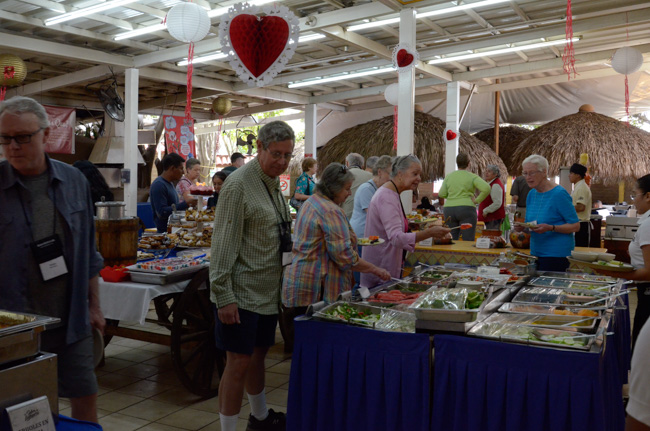 After our morning at Monte Alban we had lunch at El Sabor de Antequera, which translates to "the taste of Antequera." The Spanish originally called Oaxaca "Neuva Antequera," after a city in Spain. This buffet, which had something for every taste, was dedicated to local traditional foods. It was impossible to sample more than a tiny amount of what was available. The afternoon was free to explore or rest.

We then had another lecture about Pre-Hispanic foods and their impact on cuisines worldwide. In a humorous aside our lecturer informed us that the "trinity" of Mexican foods contributed to the word was really five! In addition to corn, beans and squash were tomatoes and chiles. Think about Italian cooking without tomatoes, Thai cooking without chiles, or desserts anywhere without vanilla and chocolate! Or, for that matter, Mexican cooking without garlic and limes.

Afterwards most people had a night on the town, but I was bushed. Jim went down to the hotel restaurant for a snack and a beer, but I enjoyed not eating for a change!