After visiting Mitla we drove to an amazing buffet restaurant, La Choza del Chef. The variety of foods was overwhelming and the quality was fine. I continued to rejoice that I could eat salads in Mexico without fear of untoward results. I don't know if this is true everywhere, but we certainly had no problems.

I had been anticipating our next stop in Teolitlan: a textile manufactory, Casa Vasquez. We scouted out textile sources on our first day in Oaxaca to have a basis of comparison for this excursion.

Sheep are not native to the Americas so textiles made of wool necessarily date from after the conquest. Cotton and maguey were the original fibers used by the Mesoamericans, but the presentation here would be all about wool.

All Road Scholar excursions, even the "shopping" ones, have a strong educational component. We saw demonstrations of traditional production techniques and had the opportunity to try them out.

People who tried carding wool discovered it was harder than expected! As a child in Mississippi I had carded cotton so I didn't need to experiment further.

This ancient spinning technique uses a spindle rather than a wheel. When the spindle rests in a bowl like this, it is called supported spinning.

Road Scholars who tried this out did surprisingly well, but it takes a lot of practice to produce a consistently fine thread.

The prickly pear paddles seen behind the spinning wheel are infested with cochineal insects. These are used to produce red dye as detailed below. 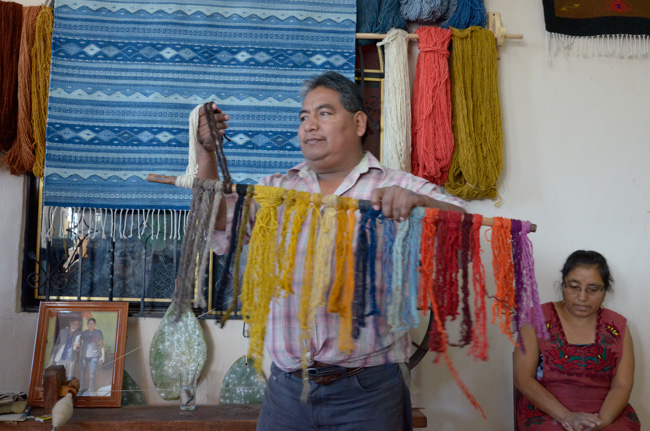 The next discussion was about dyes. Casa Vasquez, and many if not most of the weavers in Teotitlan, use natural dyes. Some are native to the Americas and others are not. The benefit of natural dyes is that they can be less toxic.

The various dyes produce different shades depending on the base color of the wool used, white, brown, or mixed, and the mordant used to fix the dye.

Our presenter shows the colors produced from only a few plant or mineral substances. The strands to the left are the natural wool of the sheep. 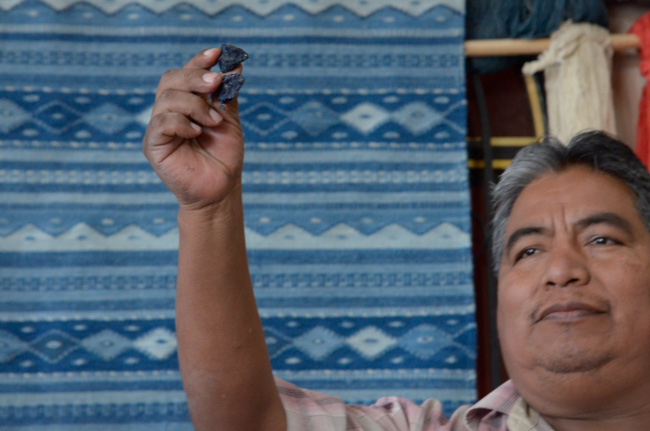 Indigo comes from a plant native to the Americas. The process used to extract the usable dye from the plant is complicated and produces nuggets like these. The resulting fabric can be seen in the background. 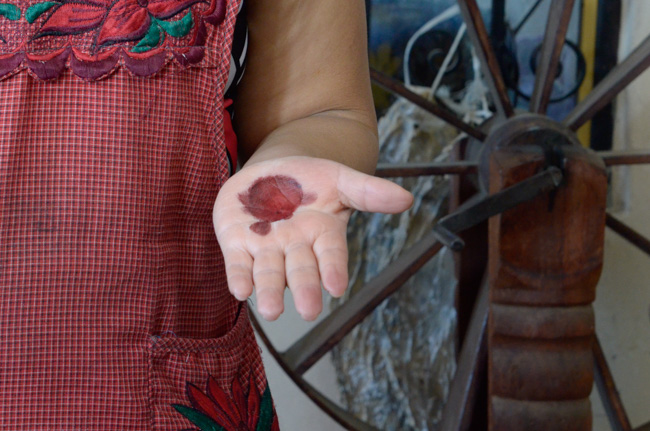 Crushed Cochineal insects produce a red dye. This basic color changes depending on whether it is modified with an acid (becomes more orange) or base (becomes more pink).

Insects are collected, killed by steaming, and then ground. Cochineal was Mexico's second most valuable export, after silver, for centuries until an artificial red dye was developed in the mid-19th century. 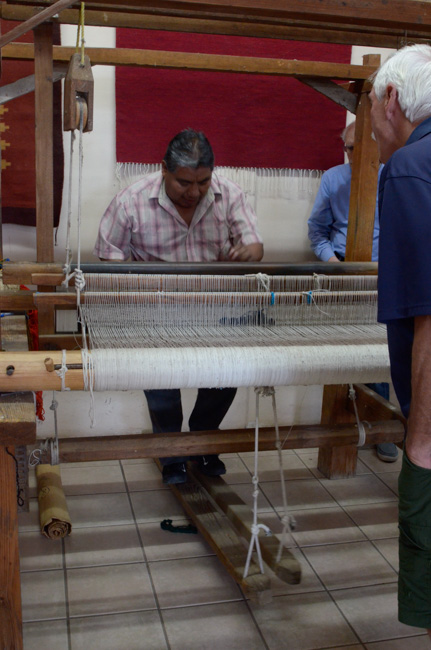 After the dying discussion we watched a demonstration of weaving on the treadle loom. Before the conquest, weaving was done on a backstrap loom and was primarily woman's work. The Spanish introduced the treadle loom, and according to their own tradition, taught the technique to men only.

Afterwards came the opportunity to shop!

Once upon a time Road Scholar trips completely turned away from shopping opportunities. That has changed due to feedback from participants. This trip had more opportunities than most for shopping, but we didn't encounter any obnoxious hard-sell tactics.

This is the textile that captured us. It now graces our living room wall over the sofa.

These are traditional Zapotec motifs.

After folks had shopped to their heart's content, we were back on the bus and away. 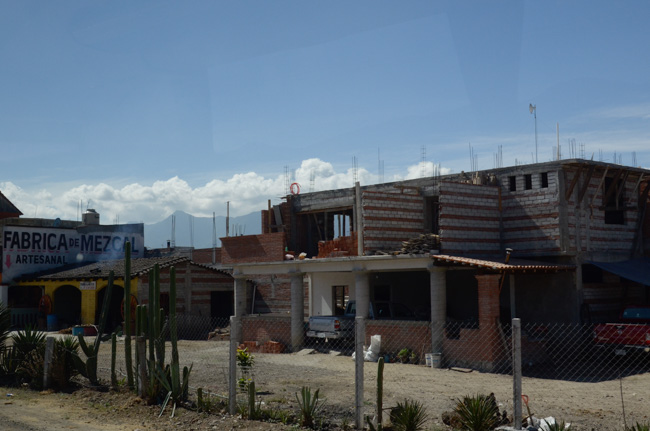 We saw many unfinished houses in the countryside and sometimes in the towns as well. Some were almost complete and occupied even though rebar stuck out the top; others were in th early phases of construction.

The reason is not that unfinished houses are taxed less. Bank loans are so difficult to obtain that people build as much as they can with the money they have and wait until they get more.

Occasionally the rebar had bottles covering the points. Some believe that deflects lightning! It doesn't. 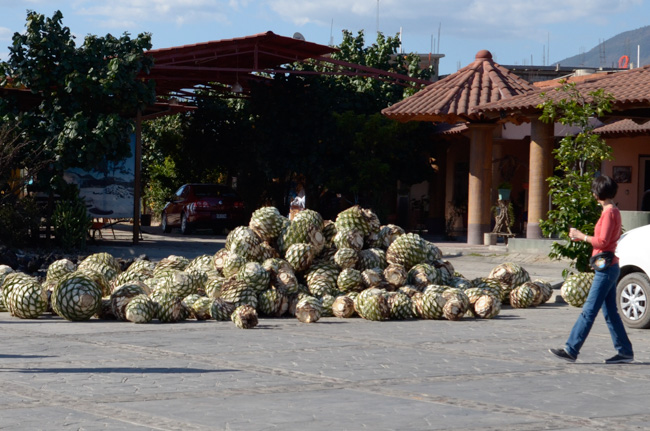 Our next stop was a mezcal factory. Here we learned the process of making the local firewater.

First the maguey has to be harvested. The heart of the plant is called the "pineapple" for obvious reasons. The harvest is done as the plant is mature, just before it blooms. An individual plant only blooms once before dying, so these plants were doomed anyway. 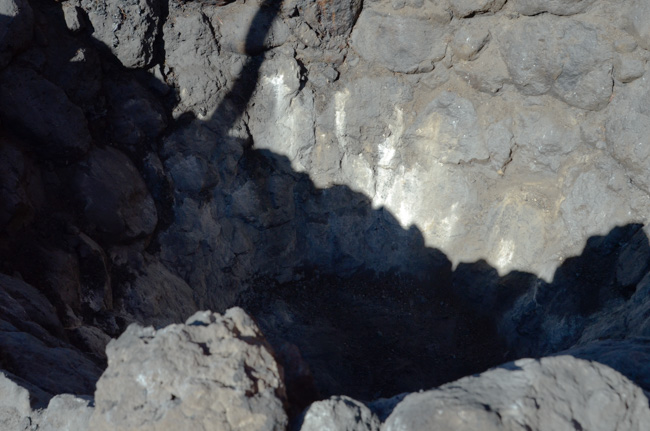 Traditionally the hearts are roasted in a large pit oven. A fire heats the stones. Once it has burned down, the "pineapples" are placed in, and then everything is covered. After the hearts are cooked they are pretty ugly looking, but the flesh is sweet and juicy.

We were given some cooked maguey to taste and it was really tasty. Better than the resulting liquor in my opinion! 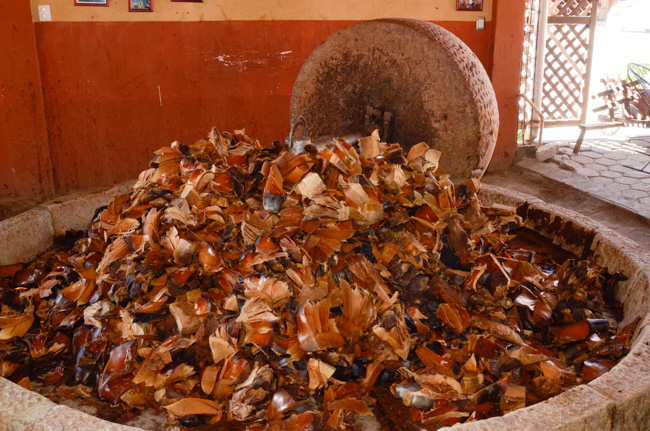 The traditional press is a large stone drawn by a horse around a pan that collects the juice, which then drains into a fermentation vat. The must is then distilled and aged to produce the mezcal.

Mezcal is aged for a varying number of years. I believe it is only the one-year variety that gets the worm added into the bottle. If you must drink mezcal, go for the better stuff without the "worm." 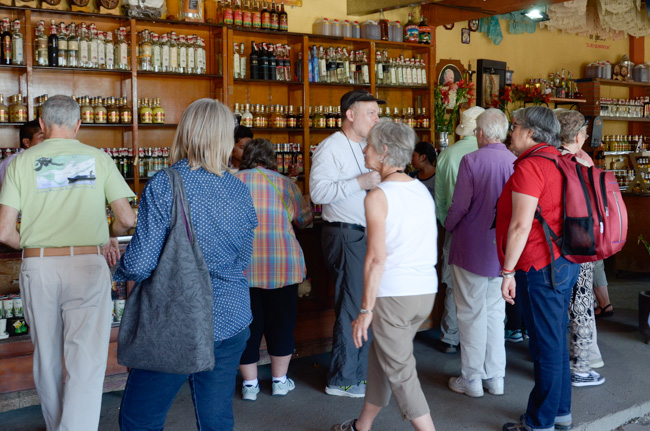 After the educational component, most folks bellied up to the bar for a tasting. Neither Jim nor I will be exchanging Jack Daniels for mezcal! 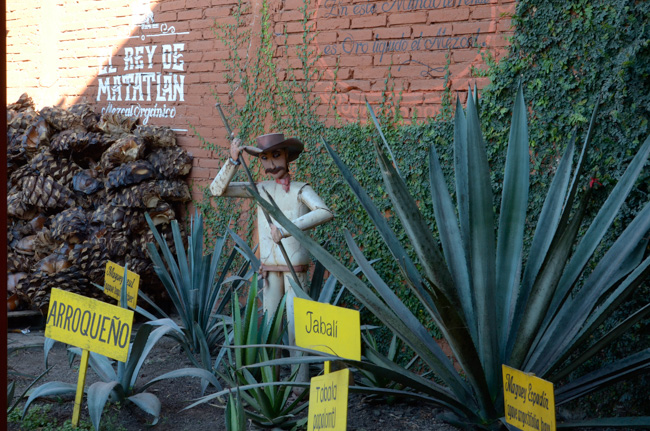 A small demonstration garden illustrates the varieties of maguey that are used to produce mezcal. Roasted "pineapples" are stacked in the background. 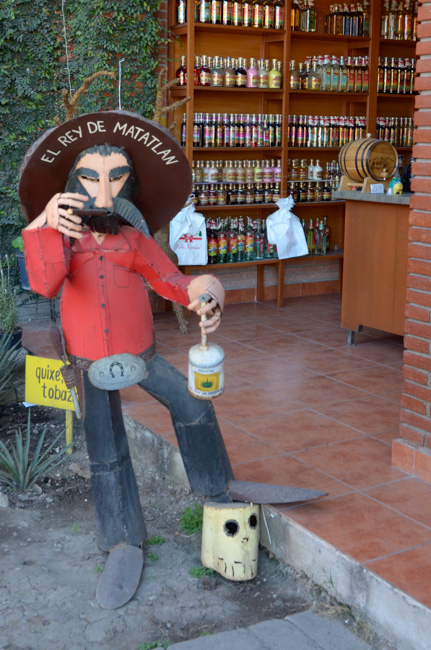 This whimsical King of Matatlan stood guard over the demonstration garden.

A busload of happy campers headed back to Oaxaca for a free evening out on the town.

Jim and I decided to try the restaurant La Olla. Prior to this trip we had read that Mexican cuisine is one of the wonders of the world. Having been most familiar with Tex-Mex, we were unconvinced though we love Tex-Mex. Then we heard that Mexican cuisine had been accepted by UNESCO, along with French cuisine, as an intangible cultural treasure. We still weren't convinced. Even all that we had learned on the trip so far hadn't grabbed us.

Oh my. The meal at La Olla was convincing! It was as good as anything I've ever eaten whether it had Michelin stars or not.