An overnight aftershock woke us up, but by the time we got to the relative security of the bathroom, the shaking was over. It took a few minutes for commotion in the hallways to die down, but we crawled back into bed and dozed off.

The following day we loaded onto our bus for an excursion into the countryside.

Our first stop was at Santa Maria del Tule to visit THE Tule Tree. It holds the Guinness World Record as the "stoutest" tree, but the gradual drying of the surrounding land threatens its existence. The runner-up to the "stoutest" title is a giant sequoia. The area had once been marsh land with a nearby lake, but both lake and marshes have disappeared.

Our guide pointed out that towns in the area often have two names. The first name is Spanish, "Santa Maria" in this case. It typically denotes a patron saint. The second name is older. "Tule" comes from Nahuatl and denotes the former marshes. 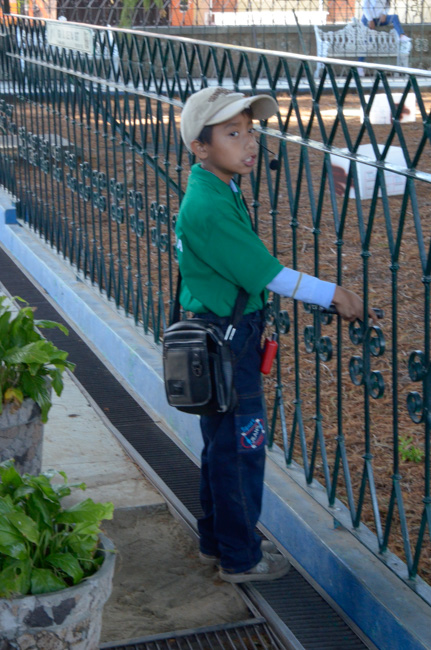 A local nine-year-old youngster was an authorized guide and he introduced tourists to the tree. For the rest of our visit we picked up his catch phrase of "Come on, please" when we needed to move on to a new site.

He pointed out fanciful images that he saw in the gnarled bark. The only one I remember was "baby elephant taking a nap." He also told us that he had been leading tours for three years -- starting when he was six!

It is impossible to get a close-up of a tree this big, but it had a lovely arrangement of branches.

The tree, a Montezuma Cypress, is estimated to be around 1500 years old. At one time it was thought to be two or more trees grown together, but DNA testing has confirmed that it is a single plant.

The adjacent church, dedicated to the Virgin Mary, dates from the 17th century. The Spanish placed churches near indigenous people's sacred sites, and the tree had been a sacred place of pilgrimage for a long time. The church was closed due to damage from the September, 2017, earthquake.

The large tree to the right of the church is a "child" of The Tule Tree. At one time there was quite a market for Tule Tree babies.

The extensive gardens featured roses and topiary, which was popular throughout our travels. 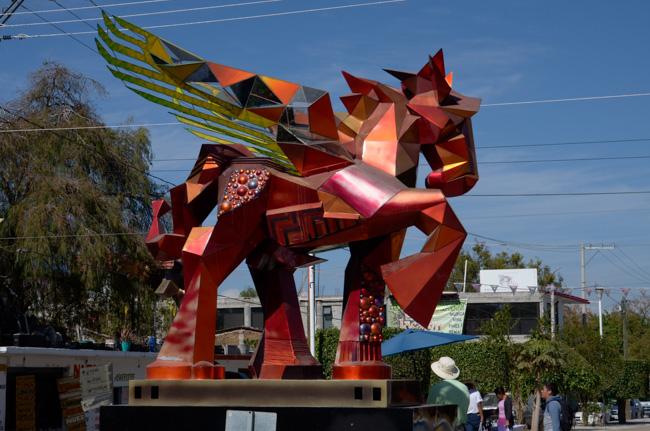 Of course I had to take a picture of the "horse with wings" sculpture at the entrance to the gardens. I also took a picture of the label hoping to look up the artist for this travelogue, but I can't read the script. Our guide said that he had gotten so many commissions at government-sponsored tourist sites that there was grumbling among other artists.

As we proceeded toward Mitla, we passed many agave farms. The plants, cultivated for mezcal production, appear to be the primary crop of the area.

Oaxaca city is at the center of three intersecting valleys: Etla in the northwest, Valle Grande in the central and southern area, and Tlacolula in the east. We are proceeding along the Valle Grande.

The Pacific coast is on the other side of the mountain range, the Sierra Madre del Sur. 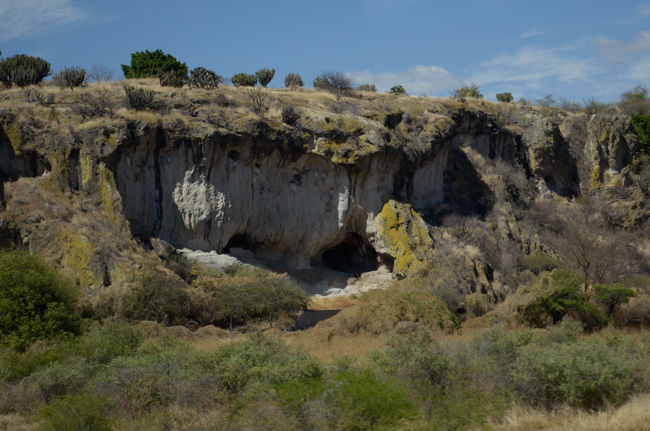 We passed an area containing several caves and some petroglyphs (I failed to get a picture of the rock art). These prehistoric caves have been named UNESCO World Heritage sites. Seeds and corn cobs dated 8000 years before present were found in the area and are the oldest evidence of domestication of these plants. 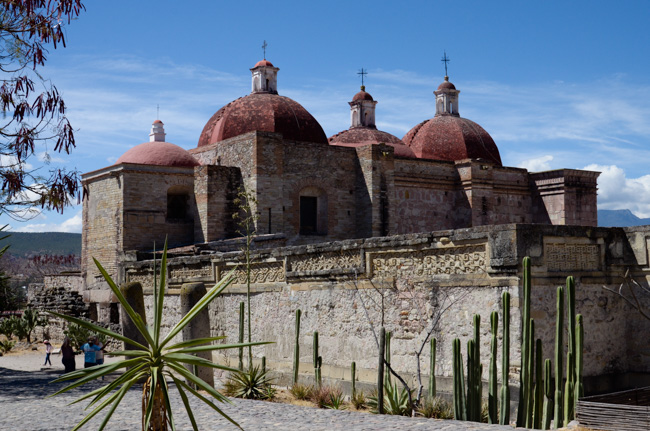 When the Spanish arrived at Mitla, a Mixtec city and ceremonial center, they systematically destroyed many of the buildings and used the stones to build this church dedicated to St. Paul. As noted above, it was their policy to co-opt sacred sites.

The church and adjacent pre-conquest buildings are called, wait for it, the "Church Group."

Adjacent to the church was an area, "Courtyard C," that escaped complete destruction. As I recall this was either an administrative or residential area so the Spaniards may have adapted it to their use.

The geometric friezes above the arch are made from cut and polished stones fitted together without mortar. They are unique to Mitla. 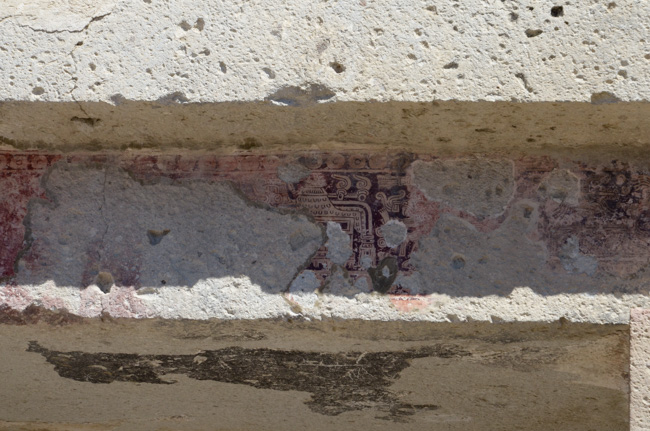 Only fragments remain of the once extensive frescoes. This one was located in the recess of the lintel above.

Another major area of pre-conquest buildings was called the "Columns Group" for some massive columns that you will see later.

There were at least two large tombs in the courtyard. One can be seen here in the lower right of the image. I didn't go into it, but I did visit the other one. It was awkward and cramped but had elaborate stonework friezes.

The square piers once held carved decorations that were removed and put into a local privately-owned museum. The contents of the museum have since vanished under suspicious circumstances, and no one knows what has happened to them. The only discussion that I can find in English is embedded in the Mitla Wikipedia article. 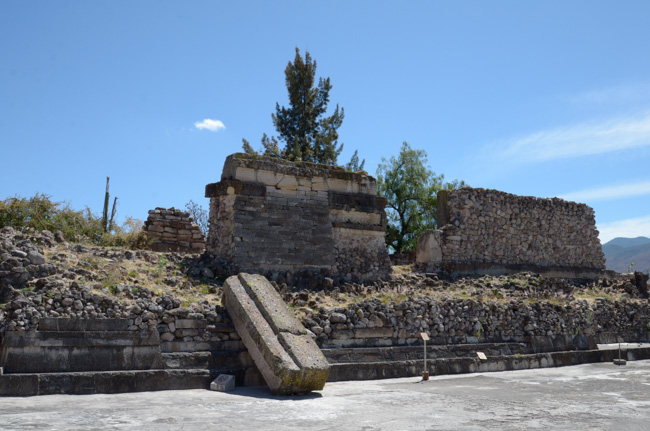 On the opposite side of the courtyard are the remains of a structure cannibalized by the Spanish to build the church shown above. A plaque nearby states:

The ultimate objective was to do away with the vestiges of power of the pre-Hispanic culture in order to impose Western civilization and religion.

One of the things that had not been destroyed was the courtyard surface itself. Jim & I were amazed to find out that the concrete-surfaced courtyard was original. Although concrete was known to the Romans, the knowledge of how to make it was lost until the 18th century. The technology of lime mortar and concrete developed independently in Mesoamerica, perhaps as early as 1000 BC.

On the north side of the courtyard is the "palace" containing the massive columns that gave this assemblage its name. (The red paint is a modern addition.)

The room containing the columns, which would have held up the original roof, is an anteroom to the interior of the structure. 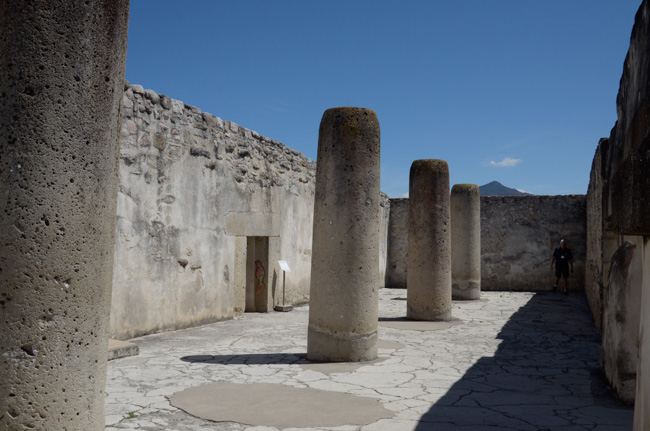 The unassuming door is the entrance of a twisty passageway leading to the rest of the building. This anteroom would originally been covered. 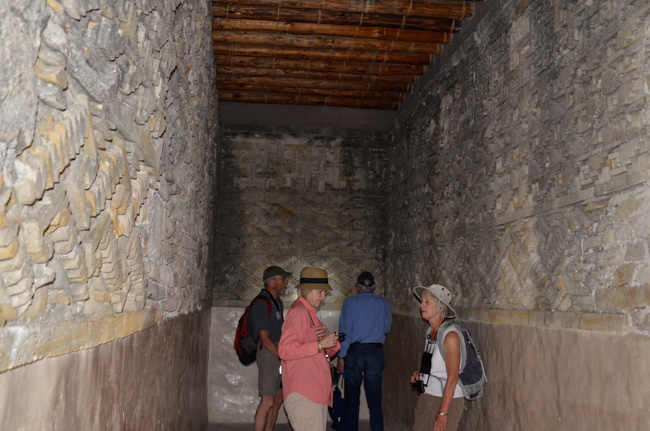 We followed the passageway to an inner courtyard with several rooms such as this one surrounding it. The walls of these rooms were almost completely decorated with the cut-stone friezes seen elsewhere. The designs seamlessly wrapped around the corners in the same manner that a figured wallpaper is installed nowadays.

The roofs are modern additions intended to show how the rooms would have looked. Dark! There were no windows and only a single door.

The function of these rooms is unknown.

Another view of the stonework. The raised designs had been highlighted in white against a red background. Traces of the colors can be seen as well as the variety of the designs.

Jim and I agree that Mitla was the most fascinating of the ancient sites we visited. The information at the link repeats some of the above information, but also gives some insight into how these ancient buildings have survived so well in an active seismic zone. 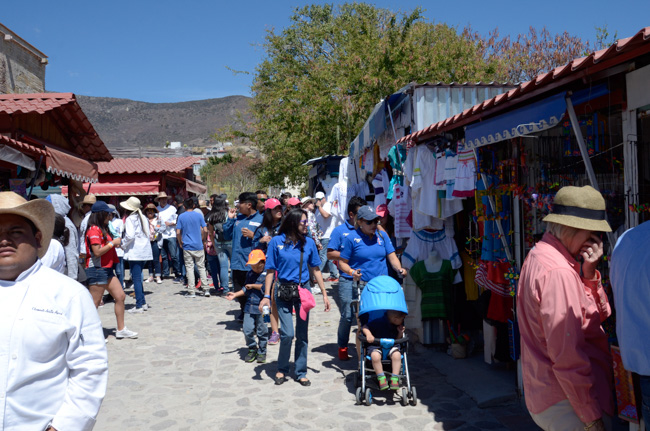 Even archeological sites have an "exit through gift shop" component.

In this case the way out of the site and back to the bus parking lot took us by numerous stalls selling handiworks. This was a lot more crowded than the actual ruins!

We visited on the same day as a convention of Ford Mustang car clubs from the surrounding area and beyond. The various clubs had matching polo shirts with club logos and it was definitely a family-friendly event. We played tag with Mustangs all weekend. I wasn't able to find an English-language site that described it, but I found a Spanish one (thanks, Google translate) that said it was the second annual national rally of Mustang clubs in Oaxaca.