The day after our Oaxaca orientation we got cooking. Our large group (24) divided into two teams. "Team A's" class was in the morning with free time in the afternoon. "Team B," which included Jim and me, had morning free time and an afternoon class. I don't recall what we did in our free time. Whatever it was, I didn't take any pictures. I do remember walking to a nearby park where we had an al fresco lunch in one of the recommended restaurants: La Casona del Llano. Painters working on the exterior of the old casa provided the entertainment. 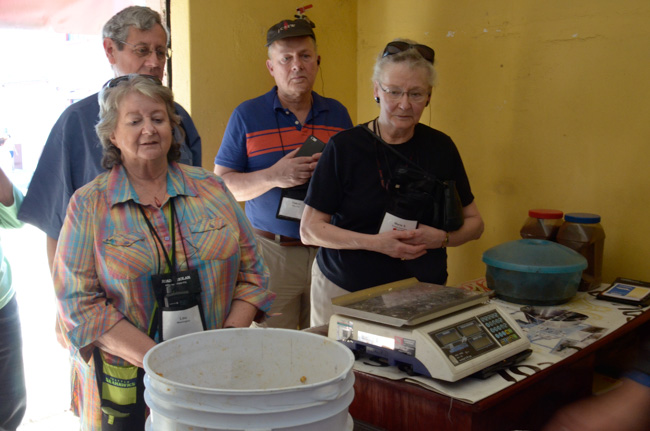 Chef Gerardo Aldeco Pinelo met Team B members at the hotel and rode with us to our first stop: the molinero or miller. Every neighborhood has a shop where corn or other grains can be purchased and ground. It is much easier than using a metate!

Local housewives who make mole in bulk also bring it to be ground here. Large batches overwhelm home blenders and no one who is not attending a cooking school will grind it by hand!

The white bucket contained corn that had undergone nixtamalization to enhance its nutritive value. Lou, George, Kevin and Marie are giving it the eye. 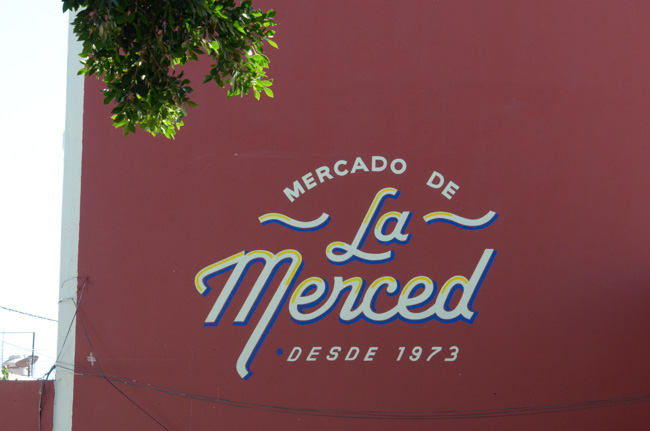 The next stop was the La Merced market. Chef Gerardo led us through while explaining the items on his shopping list and some of the other offerings. It was much quieter than the two markets we had visited the day before even though there was live music playing.

"Group A" said that it was more crowded and hectic in the morning. Plus no live music! 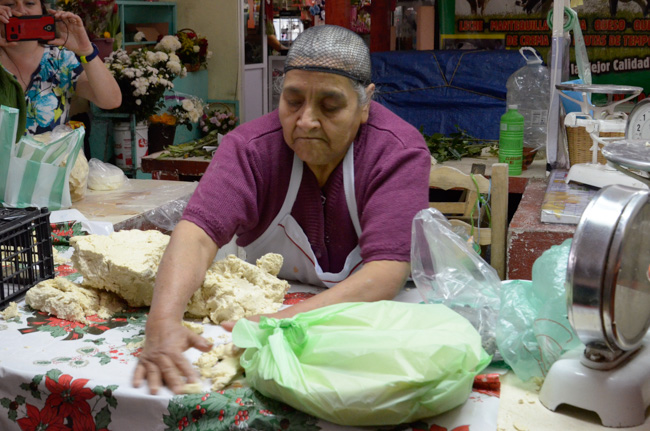 We purchased white corn and blue corn masa from this vendor.

Later as part of our training, we did additional kneading before using the masa to make tortillas. 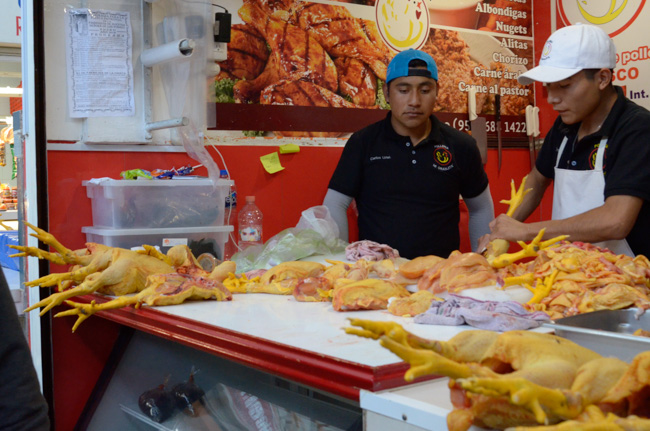 Shredded chicken went into one of our dishes. The workers quickly trimmed up and dismembered the chickens. No, we didn't use the feet!

Chef Gerardo explains the difference between the various types of produce available. We will be using Key limes and Roma tomatoes. There is some controversy about the desirability of Key limes, or Mexican limes as they are sometimes called. I can attest that the ones we used really were hard to juice. 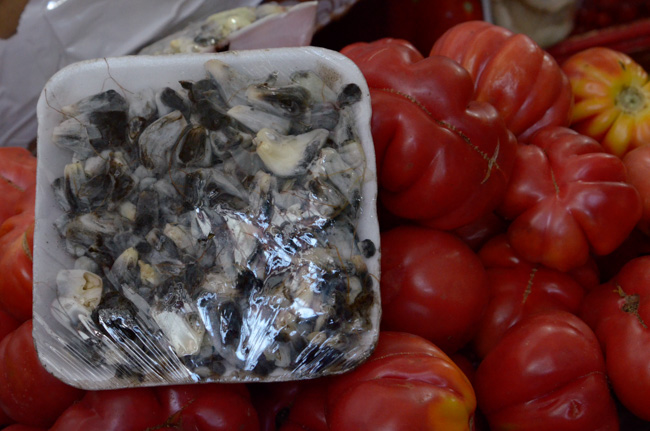 The package has an ingredient you don't find at the local Kroger. The Nahuatl name for it is huitlacoche, which sounds a whole lot better than the common English designation: corn smut. Others call it Mexican truffles.

Whatever, call it good! We used it in soup.

Chef Gerardo's home kitchen was our classroom. His mom and aunt had gathered and prepped many ingredients with the aide of their kitchen helper!

These are ingredients for Mole Coloradito, one of the Seven Moles of Oaxaca.

Most of the time was spent chopping and grinding, but there were opportunities for actual cooking. George and Tom stir up a storm under chef Gerardo's watchful eye. 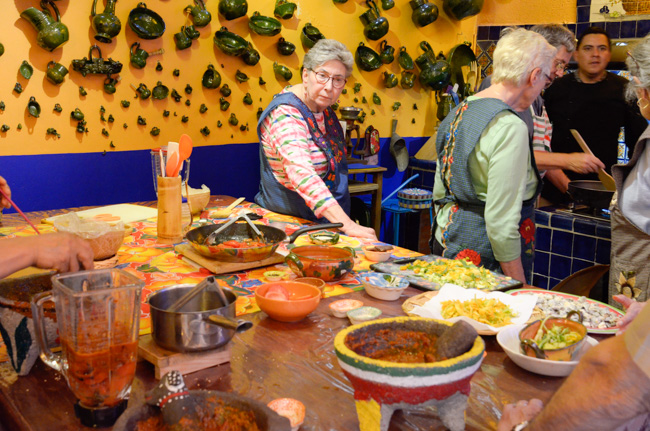 The work table started out so organized and neat!

Now pans, blenders, and molcajetes are full of chopped roasted and ground ingredients. Cheryl looks glad that she doesn't have to clean it up. 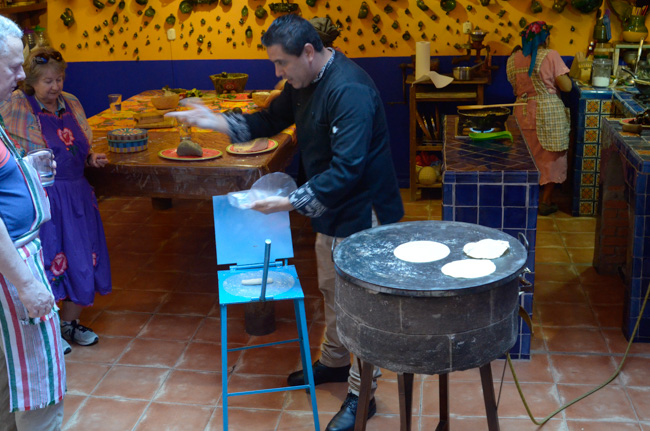 Chef Gerardo demonstrates tortilla making. The tortillas are squashed thin in the blue press and then carefully transferred to the gas-fired comal for roasting.

Like just about everything else, it's harder than it looks! The final product is much thinner than the commercial corn tortillas we find in El Norte. 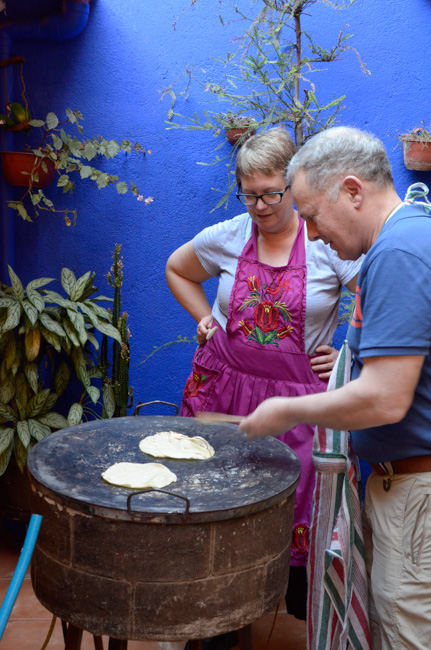 Marty and Tom are having a go at the comal.

It's not long after this that the earthquake hit! Jim & I got used to quakes while living in California, but this was MUCH more intense, at 7.2 magnitude, than anything we had experienced. Local alarms blared and the chef and his family hustled us all out into the patio -- even grabbing the cage with their pet birds. The quake lasted a surprisingly long time, but after it was over, the family determined that no damage had been done and we went back to cooking.

Even the 5.8 aftershock, which occurred while we were eating, only caused minor disruption.

Before we left there were five (5) quakes over magnitude 5.0!