After lunch at a restaurant overlooking the Zócalo, we visited two of the local downtown markets.

On our way to the restaurant we strolled down this pedestrian street past colorful buildings filled with shops and restaurants. We saw a lot of this street as it was the most direct way between our hotel and many of the tourist attractions.

We had been warned to watch our step on the sidewalks and other pavements and it was a good warning. We encountered a lot of uneven pavement. 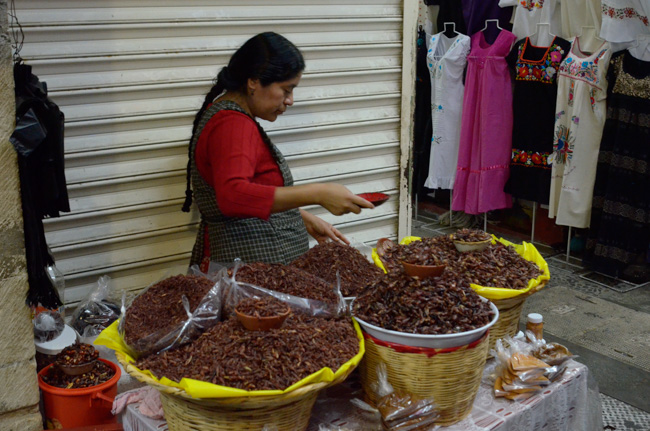 Our first stop was the Benito Juarez Market. (The description at the link was written by Suzanne Barbezat, our local tour guide.)

Chapulines, cooked and spiced grasshoppers, were a significant source of protein prior to the Spanish importations of domestic animals and are still savored today. Haydee, our tour director, bought some of the smallest crunchies for us to sample (she herself doesn't care to have them looking her in the eye). The saying is that if you eat chapulines you are sure to return to Oaxaca. I had some; Jim did not. The taste was mostly due to the spices, but there was a sour aftertaste that I didn't savor.

We may return to Oaxaca some day, but we don't see eye-to-eye with chapulines! 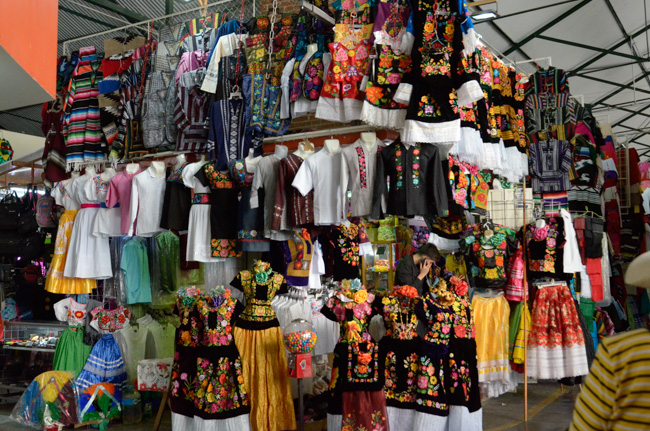 The market occupied an entire city block and offered everything you could desire: food, clothes, tourist traps. These outfits are typical of the Isthmus of Tehuantepec -- not for everyday wear but for celebrations. Many are silk embroidery on velvet.

Textiles were a primary focus. Even though we are in the time of life when we're trying to get rid of stuff rather than get more stuff, we did find a couple of things to buy. But not here. True confession: Don't like crowds. Don't like noise. Don't like confinement. Get crazy in crowded, noisy, confined places. The market was all of these things. Had I known how to get out, I would have bolted for the door!

When I visited Mexico 50 years ago, the meat stalls in local markets were neither appealing nor hygienic. Here all of the vendors had excellent displays and products. We didn't see a stinky stall. 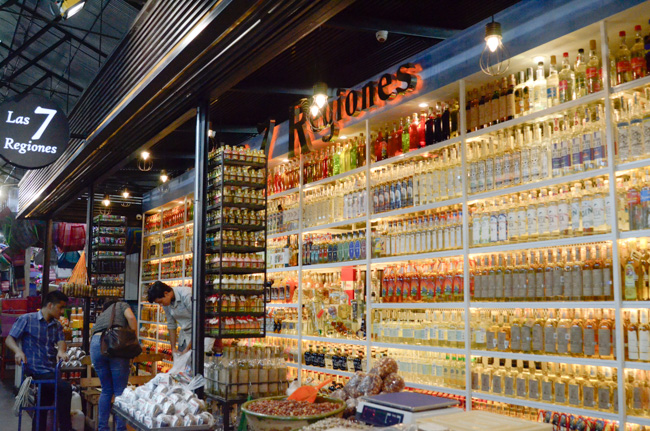 Mezcal is the local fire water distilled from the agave plant. Tequilla is a specific type of mezcal made from the Blue Agave, but there are many sources for mezcal. Prior to the Spanish conquest the alcoholic drink was pulque, which was only fermented, not distilled. Only the elite had access to it and then only for ceremonial occasions.

We got conflicting information about whether or not Mesoamericans practiced distillation prior to the conquest. As is always the case in such controversies, both sides were completely convinced that they were correct. 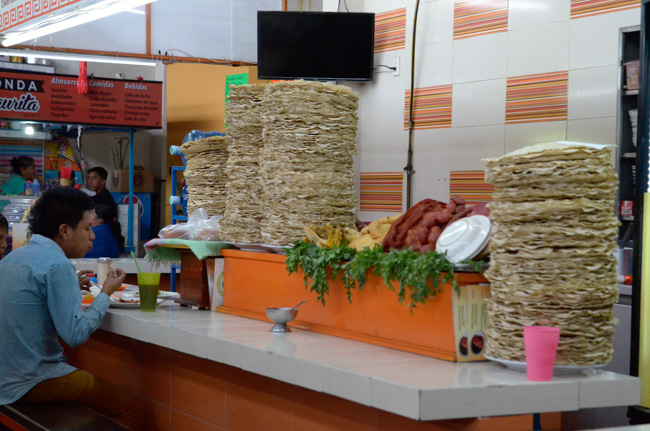 After touring the Benito Juarez Market, we crossed the street to the 20th of November market. The name honors Mexican independence day (no, it's not the 5th of May!). 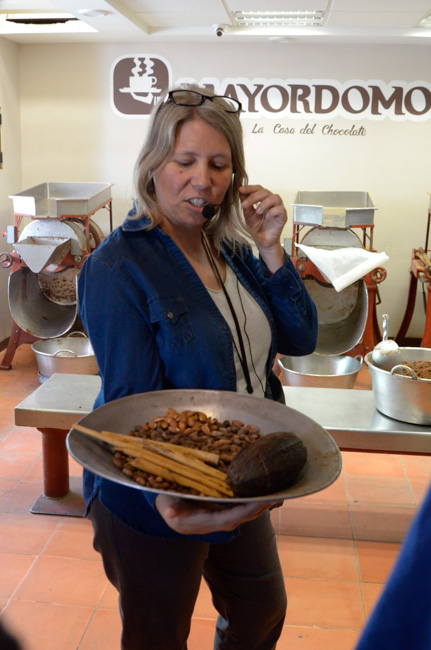 After the market we continued to a Mayordomo chocolate store. Suzanne is illustrating the four ingredients: sugar, cocoa beans, cinnamon & almonds. The long light yellow sticks are Mexican (or Ceylon) cinnamon, which comes from a different species of plant than the cinnamon common in the US. The Ceylon cinnamon is much softer and is called canela in Mexico.

The large brown pod is a cocoa pod.

Workers mix the ingredients together in varying proportions and grind them in a mill to produce liquid chocolate. If eaten straight it is gritty, but it is designed to be used in preparing hot chocolate. While we sipped samples (I had two) many people bought some to bring home. The flavor is more robust than the Hershey's cocoa I drink at home.

Later in the afternoon we had a "social hour" at the hotel where we sipped tejate and introduced ourselves. Afterwards Jim and I had planned a quick supper at the hotel followed by an Institute of Historic Organs concert at a nearby church. The service at the hotel was so slow that we didn't finish in time to make the concert. Never mind; we had a delightful evening getting to know our dinner companions.

Several of our group attended a concert later in the week at the cathedral, but we opted out of that one.