Our first program day in Oaxaca started with a brief orientation and a lecture by Glen Pinchbeck on the "Market System in Oaxaca and its importance to Oaxacan Cuisine." It provided a good introduction to the cultural background of the area. Briefly, Oaxaca has been inhabited by a variety of indigenous peoples beginning over 10,000 years ago. Mesoamerica is considered one of the cradles of civilization and the region around Oaxaca was one of the early cultural centers. Although there has been controversy about the origin of the early inhabitants, what is clear is that a nomadic people began to cultivate and improve the native vegetation producing modern corn, squash and beans and establishing a settled agrarian society over 8000 years ago.

During the nomadic ages, people became familiar with the many microclimates of the region. They knew what resources were available where and when. As they settled down, they traded with other areas to obtain food and resources unavailable in their particular location. A market system evolved throughout Mesoamerica and into far-away locations -- even as far as the Andes. This system has formed the basis for scholarly study.

After the lecture we embarked on a walking tour including two modern downtown markets. 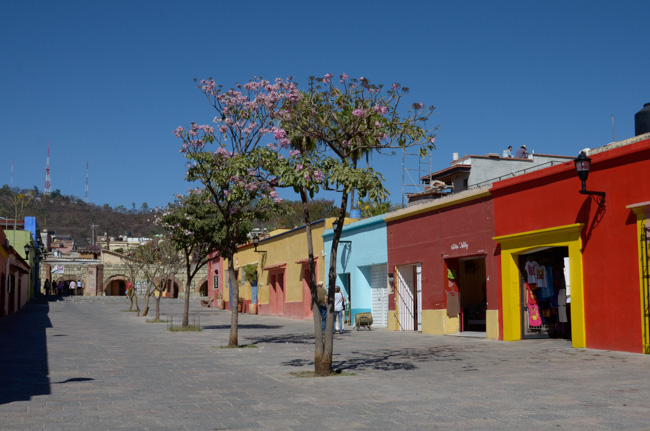 Our local tour expert, Suzanne Barbezat started our walk on this colorful pedestrian street with an abandoned aqueduct in the background.

We followed the aqueduct for a few blocks to this fountain where residents would have been able to draw water when the aqueduct was still in use.

The building behind the fountain is the home of ARIPO, a local handicrafts store. 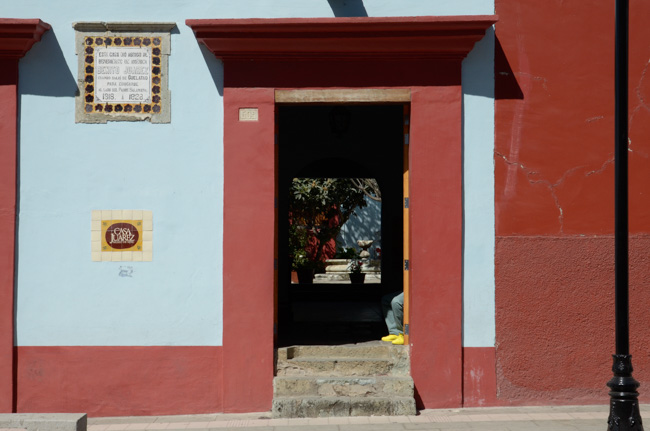 Farther along the street we stopped at the home of Benito Juárez. He was from Oaxaca province and was a full-blooded Zapotec. Although born to poor peasant parents and left an orphan at an early age, Juárez's intelligence and ability enabled him to find mentors and receive an education. He entered politics and served as president of Mexico from 1861 until his death in 1872. Part of this time he spent in internal "exile" for reasons too complicated to summarize here. For more information check the link above.

Juárez is a Mexican hero and his birthday is a national holiday. 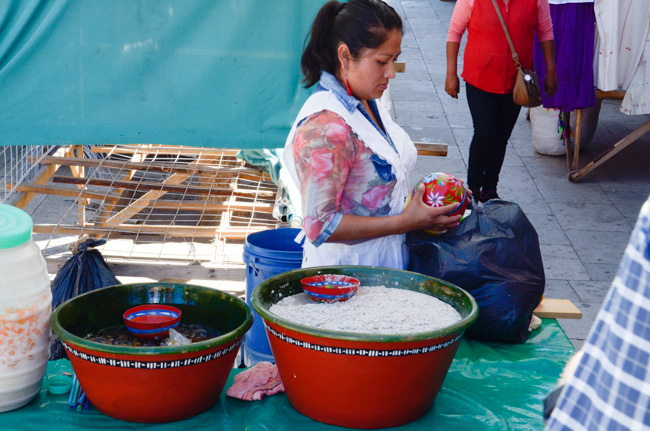 Street markets or "tianguis" border many streets. This vendor prepared and sold tejate, a popular non-alcoholic drink made from maize and cacao among other things. Our tour leaders made some for us later. It is an acquired taste.

Our destination was the church of Santo Domingo and the adjacent Oaxacan Cultural Museum.

The sanctuary and attached monastery date from the 16th century. After church property was confiscated in the mid-19th century, the military used it for barracks and stables. The sanctuary reverted to the church in 1938. The facility was restored in the late 20th century. 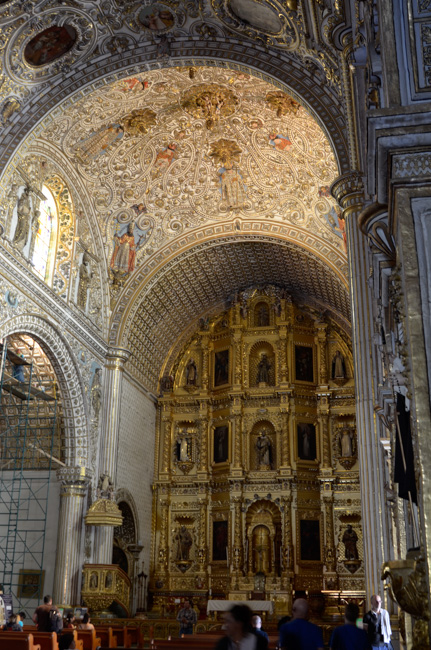 The interior of the sanctuary was encrusted with gold leaf!

The government once subsidized electricity but does no longer. As a result the interior was quite dark except in the transept, which receives sufficient natural light to enable a picture.

The scaffolding in the north transept is part of a project to construct a new shrine. 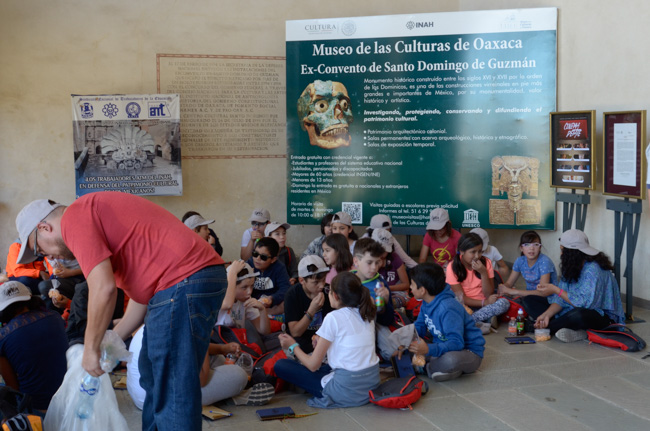 After our visit to the church, we went next door to the Cultural Museum. We were there early enough to avoid crowds, including this collection of schoolchildren waiting to go in as we left.

This was true of all the sites we visited: we got there before the crowds. A typical Road Scholar service. 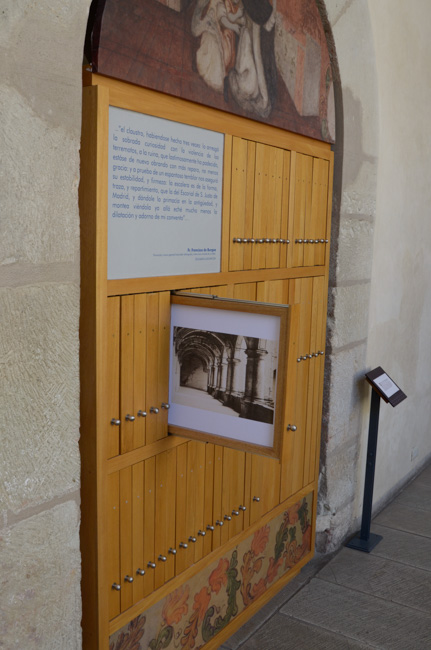 As noted above, the church and monastery were used as a barracks and stable for many years and there was significant damage and deterioration. This exhibit of "before" and "after" pictures documents the restoration. The text was in Spanish, but it was still interesting to look at the images. I found this to be a very clever display.

On our last trip I was grateful for the rusty German that enabled me to read the non-English explanations. Here in Mexico I was sorry (yet again) at my lack of Spanish because few signs and explanations were in English.

Much of the population in this area speaks one of the 16 indigenous languages in addition to Spanish. Many, but by no means all, also speak English.

The restored fountain in the center of the cloister. Some of the features had to be reconstructed by written descriptions since no pictures existed. 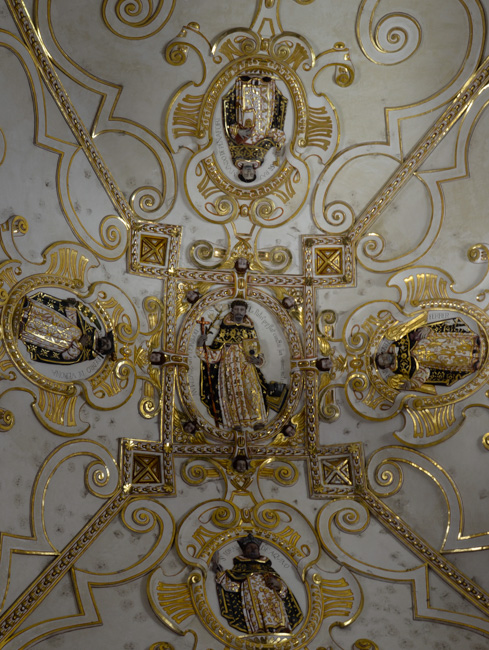 The ceiling over the main stair in the convent. The word convento was used regardless of whether the occupants were monks, as was the case here, or nuns.

This was a Dominican convent, so St. Dominic is in the center flanked by four major Dominican saints.

There are still a few monks in residence in a small facility behind the church. 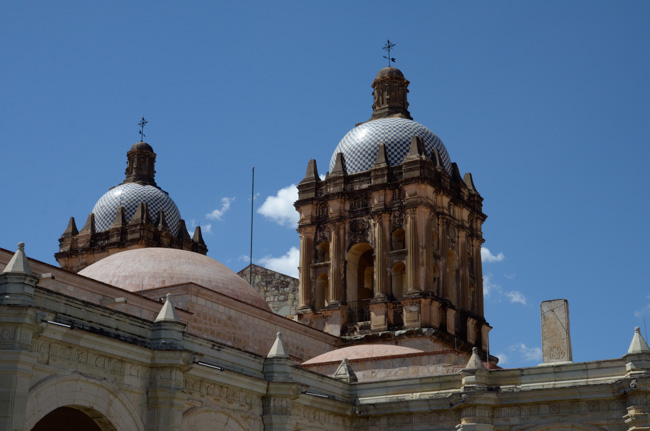 The twin steeples of the church as seen from the cloister. The oblong feature to the right of the image is a sundial dated 1639. It showed pretty much the correct time.

The remaining pictures on this page are artifacts from the museum. I wasn't able to find descriptions of some of them. 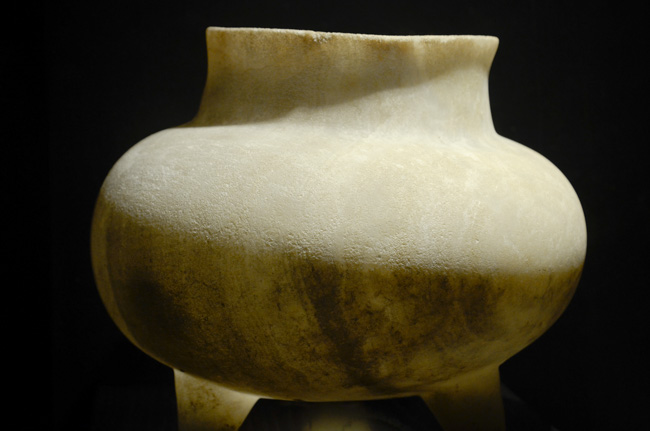 One of the rooms in the museum was dedicated to objects found in Tomb 7 at Monte Alban. My favorite item was this translucent jar of alabaster.

Tomb 7 is a classic period Zapotec tomb reused in post-classical times by the Mixtecs. It ranks as the richest pre-Columbian tomb in Mesoamerica. 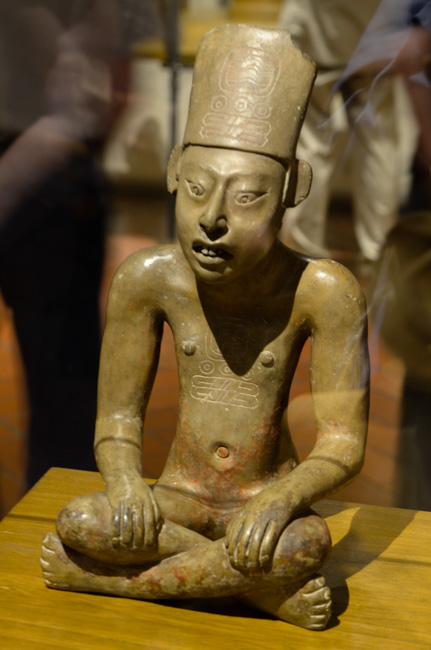 This striking vessel is the scribe of Cuilapan. The link takes you to a description of a piece at the Cleveland Museum of Art. There is also a similar piece at the Getty Museum in Los Angeles. This work has been dated to 100 BC - 200AD.

The flattened shape of the skull was produced by binding an infant's head between boards. The resulting shape was an indication of high status.

A face only a mother could love. Vessels of this shape were braziers. 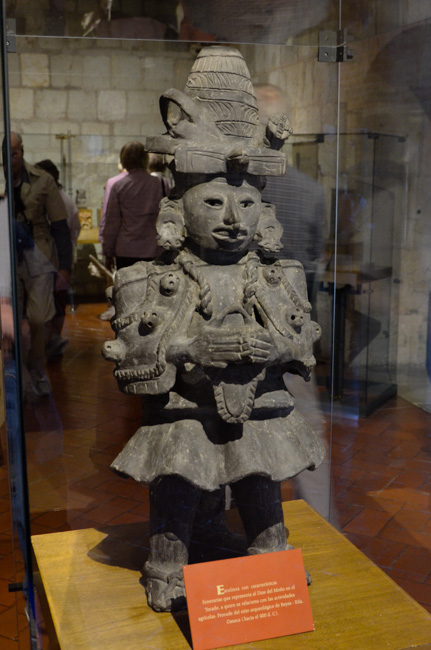 The description says (thanks to Google translate):

Sculpture with funerary characteristics that represents the Monkey God in the headdress, who is related to agricultural activities. It comes from the archeological site of Reyes - Etla, Oaxaca (around 900 AD).

The fine molding and detail of the ancient figures is astounding.