Across Europe in Luxury
Budapest

Our trip saved the best for last! Of all the places we visited only Budapest and Amsterdam made it onto our "next time" list, and we've already started looking into ways we can return to this beautiful city. There was not enough time to scratch the surface.

Our morning started with yet another whirlwind bus tour. As in Bratislava we had four buses, but today Balázs scored one of the Crystal Cruises buses and a guide who was a personal friend. He even convinced her to add in some extra stops.

Budapest is known for its thermal baths. The neo-Baroque Széchenyi Bath was built in the early 20th century. 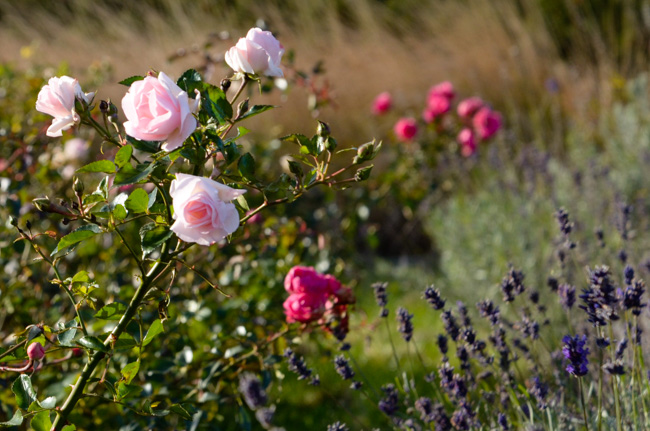 Three separate cities came together in the late 19th century to form Budapest: Buda & Óbuda,  on the east bank of the Danube, and Pest on the west bank.

Our first stop was in Pest at the Hungarian Parliament.

After the past few days of snow, it was cheering to see some roses blooming in the adjacent gardens. For that matter it was a treat to have a day of brilliant sunshine.

The Lajos Kossuth monument stands near the Parliament on the square named for him. The tone of the figures is somber. During the time of the Communist government the monument was replaced with one that was more triumphant, but the 1848 revolutions that he in part inspired were failures! After 1989 a replica of the original monument was installed as part of a renovation of the square and the triumphant one removed.

Many Communist-era statues have been relocated to Memento Park. The notion of a park for former heroes who no longer speak to today is one that we should consider here in the US for Confederate generals and others who are being displaced as reminders of their association with the shameful cause of perpetuating slavery. (No, that's not PC-talk; that is fact.) It would be better to preserve them in context rather than trying to bury them. 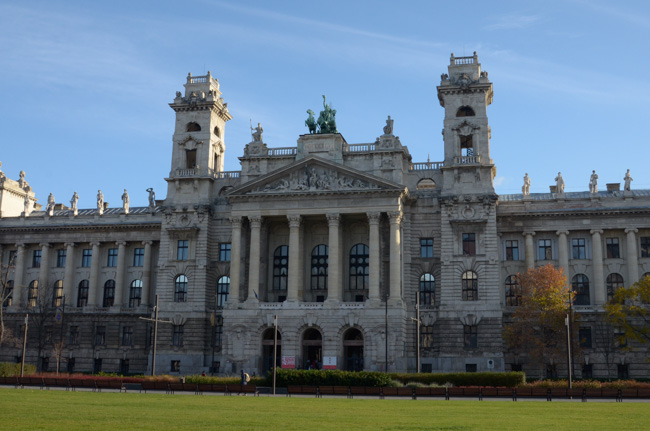 Also located on the square is the once and future palace of justice. In recent years the building, constructed in the late 19th century, has served as the Ethnographic Museum, but it is in the process of being returned to its original function. The artifacts began relocation in 2019 to a purpose-built facility. 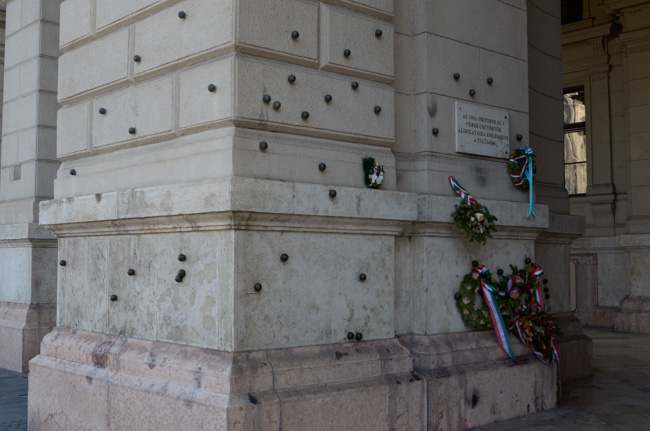 Bullet holes in the columns of the Palace of Justice. The plaque reads (more or less) "October 25, 1956, Remembering the victims of Bloody Thursday."

The bare facts are that on October 25 a crowd of unarmed and peaceful demonstrators supporting the Hungarian uprising came to Kossuth Square and were fired upon with great loss of life. Taking it beyond that gets a little weird. I found an extensive analysis of what might (or might not) have happened that day. It indicates that the demonstrators were unknowingly "herded" to the square to be massacred as a show of force. There is an interpretive center underground at the square that we did not have time to visit. I would love to know what it said.

It's odd that there is so little on the WWW about this event, especially contrasted with material on the Tiananmen Square protests. 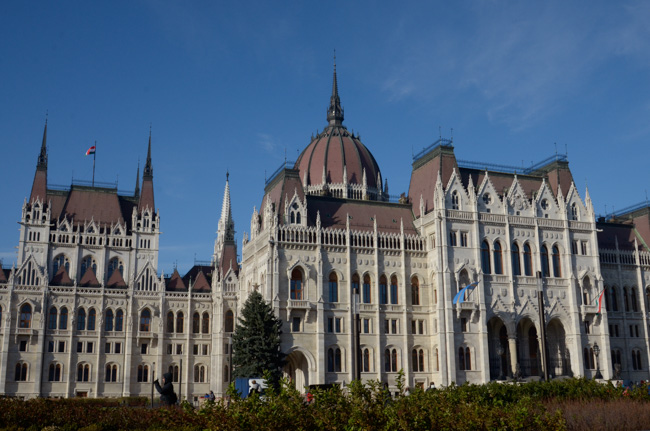 Part of the Parliament from Kossuth Square.

Two banners flank the main entrance -- one represents Hungary and the other is a tribute to the roughly 1.5M ethnic Hungarians living in Transylvania, once part of Hungary and now part of Romania. 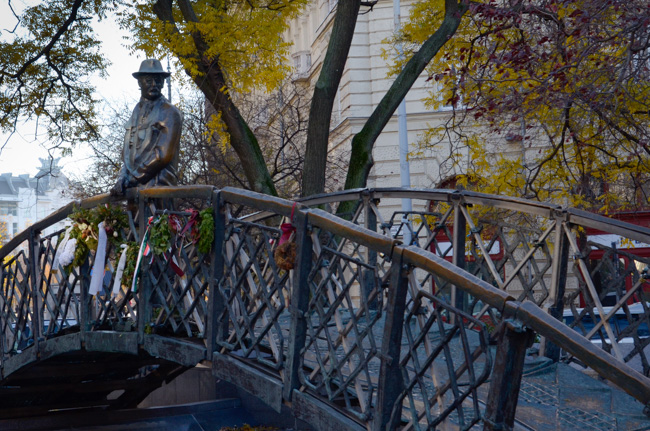 Imre Nagy (or Nagy Imre, for Hungarian tradition places the family name first) was Prime Minister during the 1956 uprising. The Communist regime convicted him of high treason, executed him, and buried him in an unmarked grave. In 1989 his body was exhumed and reburied with full honors. Shortly thereafter the Hungarian courts overturned his conviction.

Our local guide, who had been in the profession prior to the fall of the Iron Curtain, described how the history she related to tour groups changed over the years. Many early tourists, from other Warsaw Pact countries, only heard the official Communist versions. Now they can hear the facts.

The monument has since been relocated with much controversy. 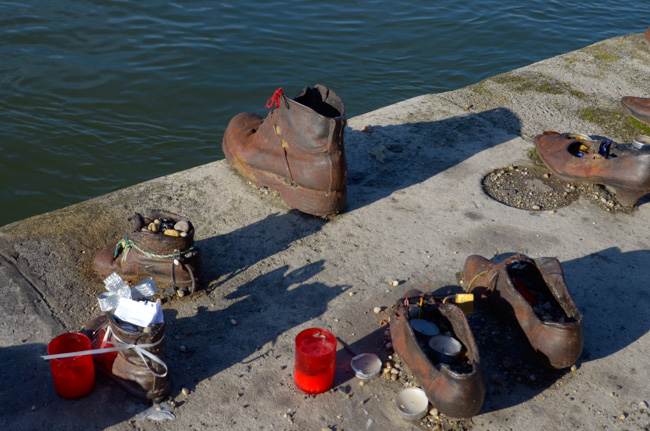 In 1944 & 1945 as many as 20,000 Hungarian Jews were murdered along the Danube riverbank and carried away by the river. This memorial reminds us of the ever-present potential for evil.

Vandals damaged the monument in 2014 although it isn't clear if the attack was racially motivated. No one was prosecuted. 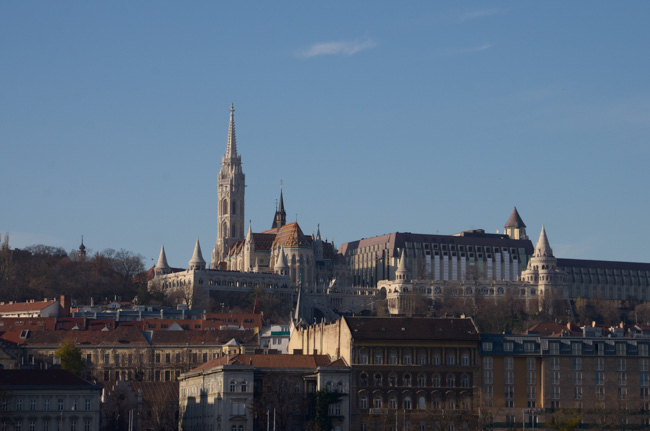 Our next destination is the Matthias church of Buda's Castle District.

This picture was taken through the bus window and has a reflection, but I still like it. The bridge is the Chain Bridge. The building behind is the Royal Palace. I struggle to imagine why exactly monarchs needed all that room.

A colorful streetscape in the Castle District of Buda. 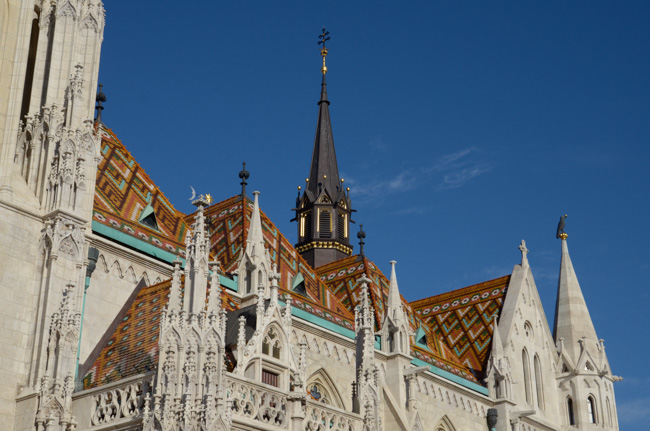 The first church on the site dated from the 11th century, but the Mongols destroyed it. The current church was constructed beginning in the 14th century. It suffered the common fate of being Baroque-i-sized in the 17th century, but an extensive restoration in the late 19th century returned it to its Gothic roots. The colorful roof tiles date from that time.

The church sustained heavy damage during WWII, but has been completely restored since with the most recent work completed in 2013. No wonder it looks almost brand-new! 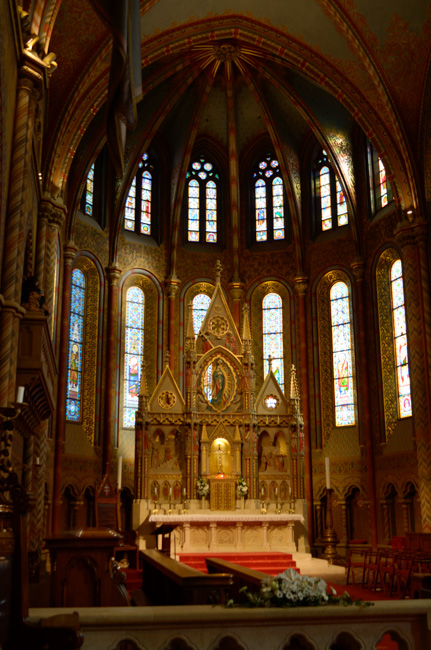 The interior decoration was ornate and stunning. During the various restorations some of the original Gothic elements were uncovered. I wondered just how much was based on the original. 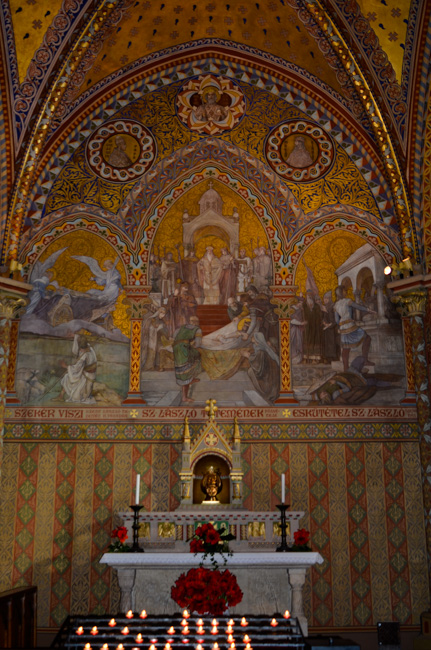 Scenes from the life of St. Lazlo, AKA Ladislaus I of Hungary.

Lazlo was an 11th century king of Hungary who greatly expanded its territory. He became known as "the incarnation of the late-medieval Hungarian ideal of chivalry." 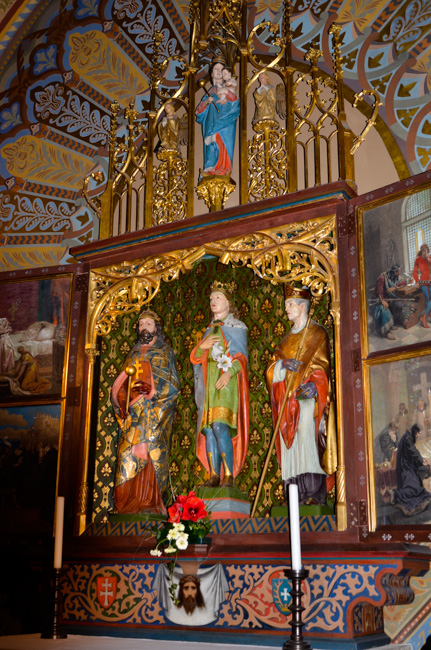 This chapel honors Imre, son of Stephen I. He was the only son who survived childhood and he was killed in a hunting accident leaving Stephen without an heir. In naming a successor, Stephen passed over the closest relative in favor of his sister's son, but civil war ensued. Stability was only obtained when Ladislaus I ascended the throne.

Stephen, who was later canonized, is credited for founding the Christian Hungarian state. 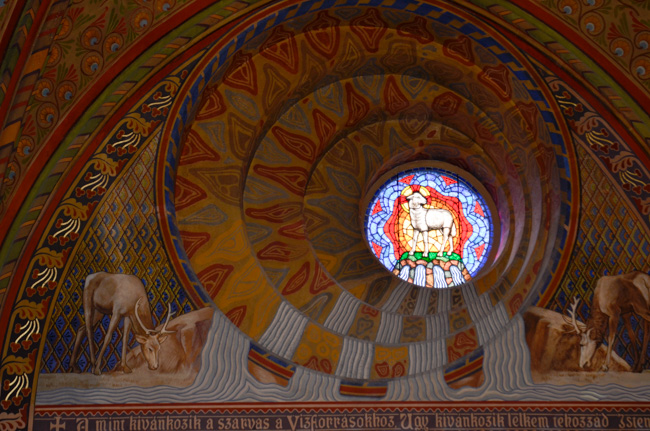 This oculus, set in an asymmetrical spiral, was hidden in a side chapel. I've never seen anything like it.

It must have some kind of mystical symbolism, but I've not found a Biblical reference that might explain it. The closest I've found is a combination of Genesis 2:10, which describes four rivers flowing from Eden, and Revelation 22:1, which describes the River of Life flowing from the throne of the Lamb. 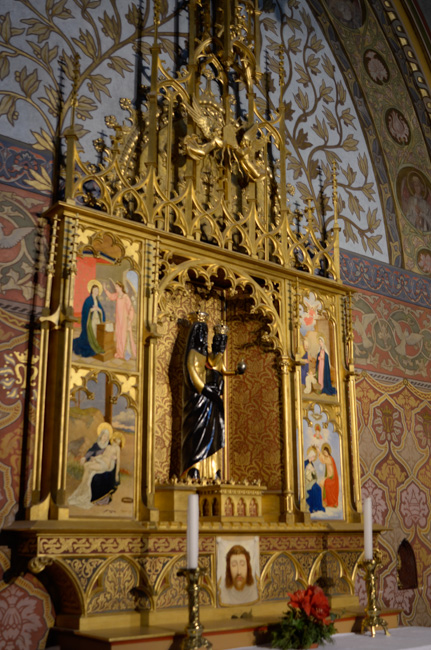 This Black Madonna was in another side chapel. We were told that the chapel was bricked up in anticipation of the Ottoman victory over the Hungarian kingdom. Under Ottoman rule (1541-1683) the church was turned into a mosque.

The legend is that, during the liberation of Budapest from the Ottomans, the wall came down and the appearance of the Madonna so demoralized the Turks that they capitulated. 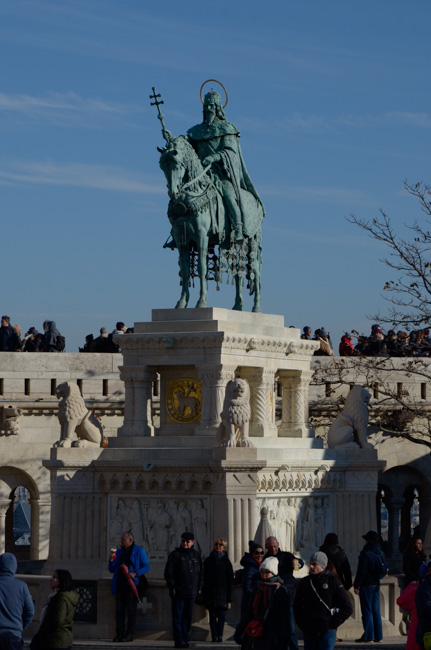 The Matthias Church is located by the Fisherman's Bastion, a late 19th century viewing terrace. In the center of the plaza is an early 20th century representation of St. Stephen.

The picture gives a hint at the Saturday crowds. If there are this many people on a December morning, I can only imagine how many there might be in high tourist season.

Balázs said that there were probably a lot of day-trippers visiting from Vienna and Bratislava in addition to the locals enjoying a sunny weekend. 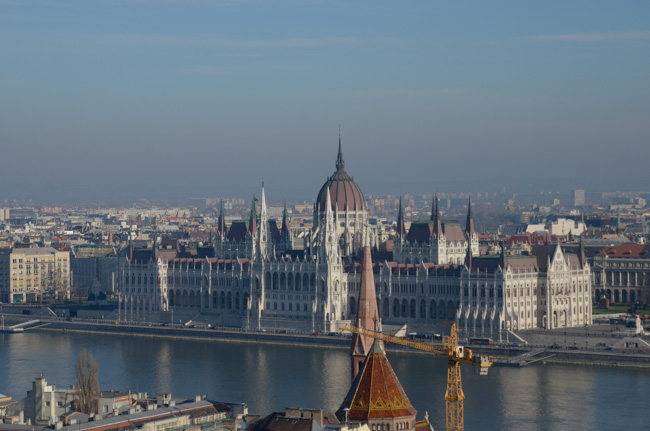 It is much easier to get a picture of the massive Parliament building from this overlook. The Kossuth Square is on the far side of the structure. 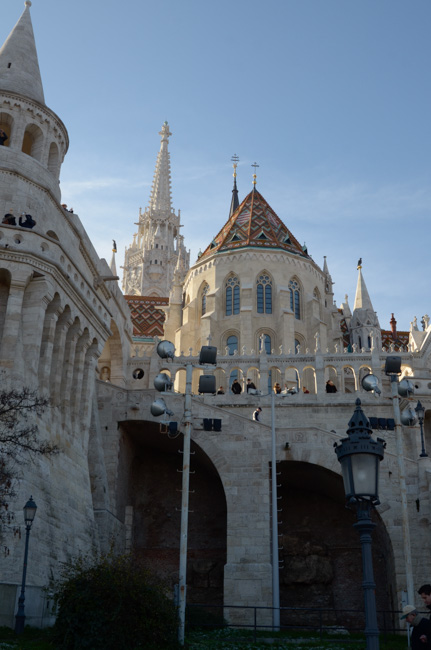 Looking up at the church from the stairs leading down from the Fisherman's Bastion. There were very many wonderful views as we descended the stairs. I had to ration myself to just one.