Across Europe in Luxury
Bratislava

We had a whirlwind tour of Bratislava, Slovakia, the next morning. In general our local guides were nostalgic for the old Communist regime. The level of mistrust in the current government is high and the old certainties have been lost.

One oddity of our visit to Bratislava was the need for an additional bus. We had been traveling throughout the cruise with three Crystal Cruises buses, but here we needed four for some reason. Our Road Scholar group got the non-standard rented tour bus. It was fine, although a little cramped, but it pointed out the benefits of having our own easily identifiable and commodious buses.

Bratislava Castle, our first destination, dominates the city skyline. The castle has been extensively restored. I'm confused because we were told that the castle is used by the government and not open to the public, but research on the WWW after coming home indicates that it is open, but not really worth touring.

In any event we only visited the outside. There might have been a great view from the terrace by the castle, but it was hazy and my pictures weren't interesting. On a good day you can see, we were told, Austria and Hungary. 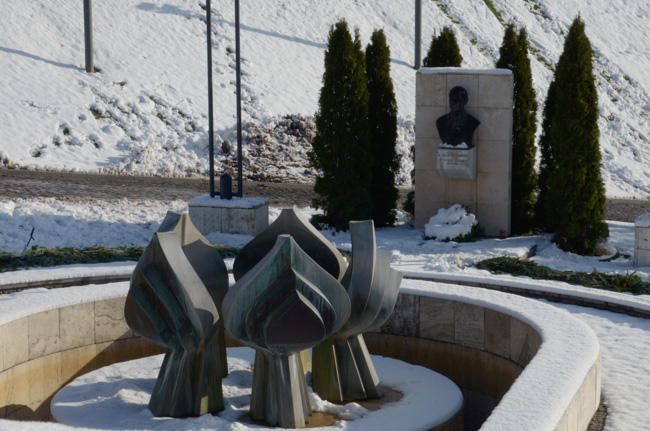 This memorial to Alexander Dubcek is located adjacent to the castle. As our guides said, he may have been a Communist, but he was a good Communist. I was studying in Germany in 1968, and I well remember the Prague Spring. We had a Czech couple at the school and that made it very personal. They returned home early because they were worried about their family.

Bratislava was a focal point of the Soviet invasion because it shares a border with Hungary. There is an iconic photograph by Ladislav Bielik of the invading tanks that ranks with the photo of Tank Man from Tiananmen Square. 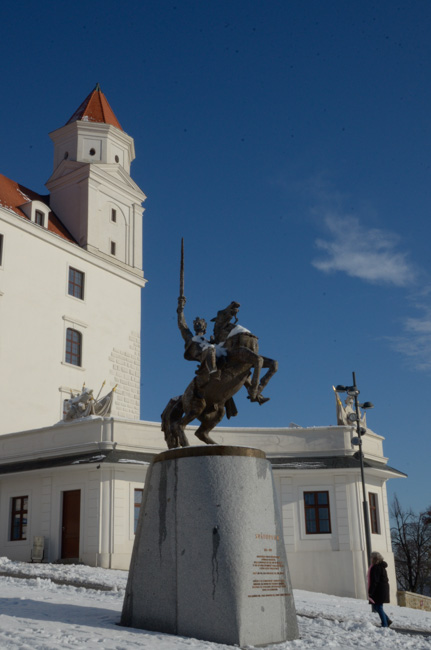 The monument to the 9th century King Svatopluk of Moravia stands in the castle courtyard. His realm included the territory formerly known as Czechoslovakia among others,

Our guides told us that the Velvet Divorce between the Czech Republic and Slovakia, was not a popular decision. Although they agreed that the Slovaks had a second-class status in the joint state, they are still nostalgic. As is usual in divorces, the children weren't consulted. The sentiment toward reunion is even stronger in the Czech Republic (I've yet to hear anyone use the new moniker Czechia), but it is unlikely to happen. 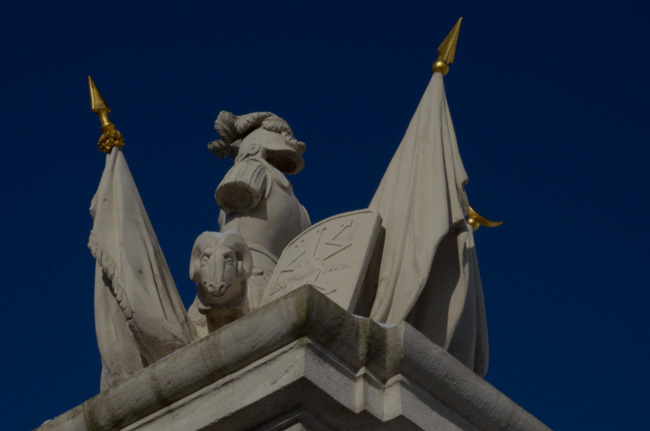 This sculpture was on the gate leading to the castle. 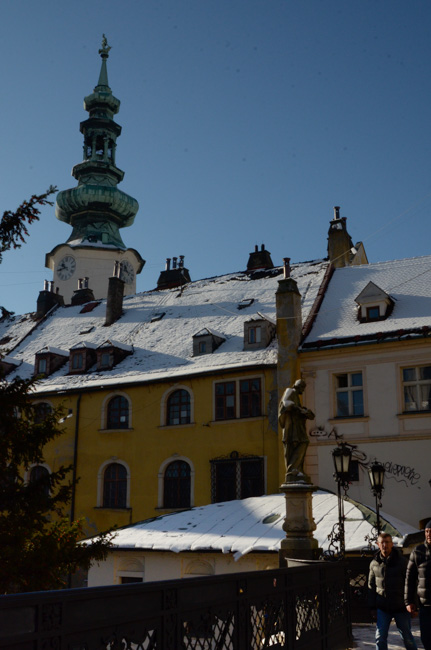 After visiting the castle we drove through some of the Bratislava neighborhoods. The nicest ones are on the same hill as the castle. Formerly they were occupied by Communist Party officials. Now they are occupied by high-ranking government officials. Sometimes the same ones.

Here we are about to enter the old city center. The tower is over the city gate, behind these buildings.

The city was called Pressburg when it was ruled by the Austro-Hungarian Empire. 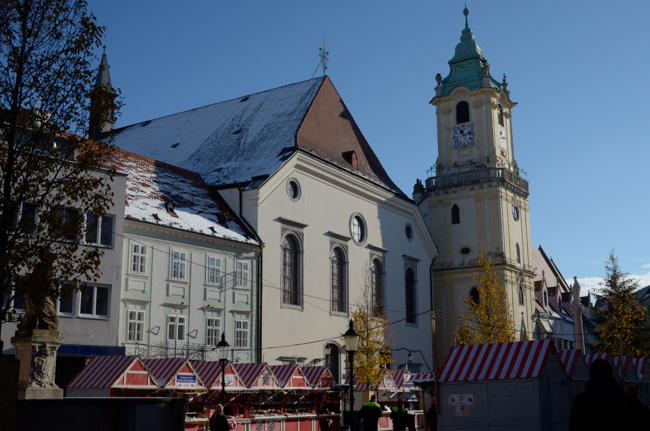 Bratislava City Hall, the building with the tower, is located on the Main Square. Portions of the City Hall date from the 14th century, and it has reached its current form by annexing other buildings over the years. The square, which at the time of our visit was the site of -- wait for it -- a Christmas Market, is also the location of several embassies.

Although almost all the buildings we saw in the city center were either well-preserved or restored, this poor specimen on the Main Square hasn't received any TLC. The words, in English, "renovate me!" were stenciled on the facade.

The presence of the dumpsters makes me think that the wish will soon come true. I hope so.

We crossed the square to a brew-pub where we will sample some of the local beers. We found that the preference for beer over wine or vice-versa in a region was dependent on the local crops. Beer, being made from barley, is prominent in areas suitable for growing grain, i.e., flat land. Wine grapes can be grown on impossibly steep slopes that are not at all suitable for grains.

Another take on this was displayed outside a local tavern:

In wine there is wisdom,

In beer there is freedom,

In water there is bacteria. 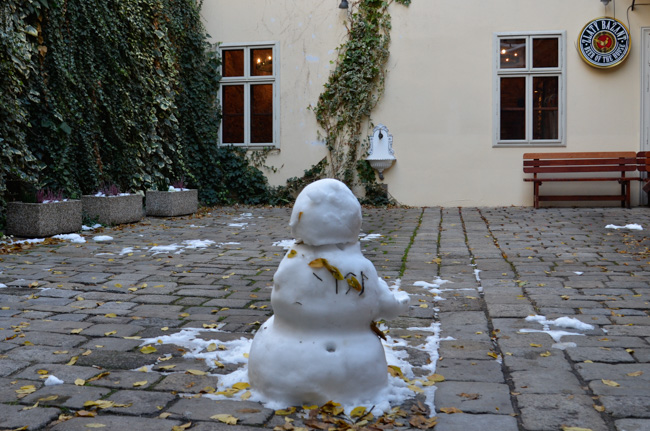 The courtyard of the tavern where we had our tasting featured this snowman, doubtless the first of the season. While researching how much snow Bratislava might get in a typical winter, I found a site that claimed that Marlinton, WV, is the place with weather most like Bratislava. Although only 90 miles from our home in Lexington, that area of West Virginia is considerably colder.

Of the beers we tasted here, the beer brewed by the tavern itself was my clear favorite, although I'm not a huge fan of beer. Unfortunately I didn't get the name of the tavern or the other beers. One of them was probably Zlaty Bazant, as indicated by the sign on the wall, but that is a major brew, so probably not the one produced by the tavern.

As we walked back to the ship, we passed yet another Christmas market on Hviezdoslav Square. This stand was selling pulled pork, which is gaining a wider following in Europe -- and why not?

The American Embassy is located on this square. 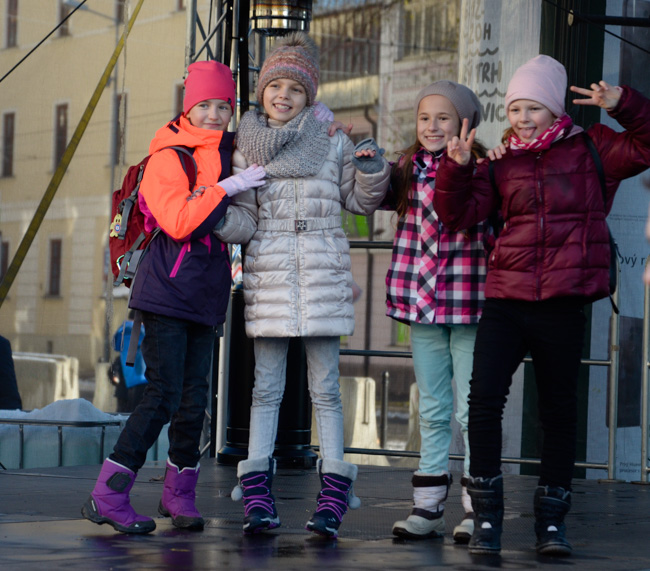 A temporary stage beside the National Theatre was quite popular. These youngsters look like they have plans to go on the stage some day for real. 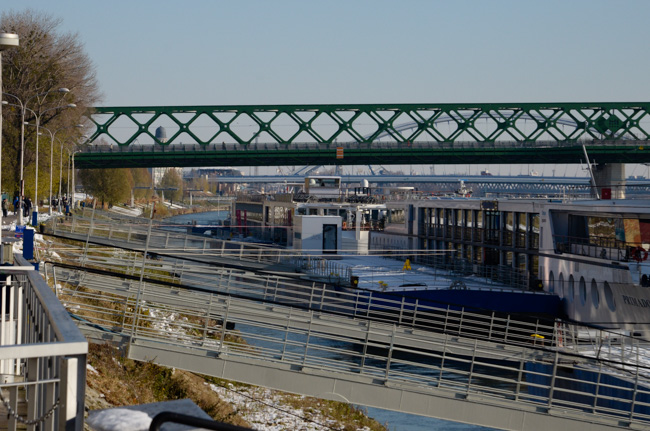 Our ship wasn't the only one visiting the city. There were at least these other two.

Although the afternoon was free to explore the city, Jim & I elected to stay on the ship. That afternoon Balázs gave a lecture on Life Under Communism. Bottom line: it wasn't as bad as capitalist propaganda would have us believe. Since the fall of the Communist governments, there are no longer safeguards built into the social order.

Membership in the EU is supposed to guarantee governmental transparency, but there are still conflicts over corruption among other things. One thing, however, Balázs was clear on: although Communism may not have been that bad, the Russian army was. Their treatment of Hungary and its people during and after WWII and also in the suppression of the 1956 Hungarian revolution was horrific.