Too much concrete and asphalt gets to me. I'm a country girl and like to get closer to nature. The ship was offering a "Vineyards of Vienna" hike and I signed up as did some other Road Scholars. 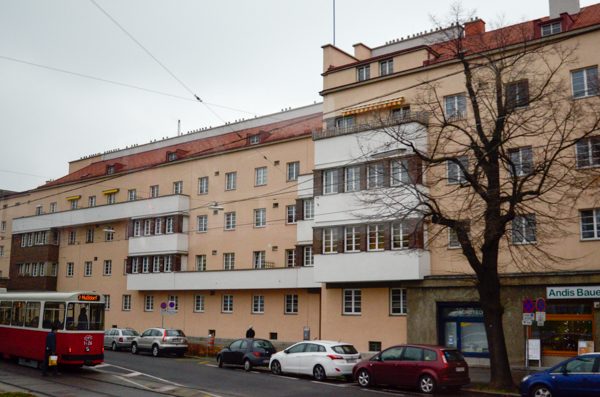 But first we had to get out of town.

I had seen several buildings on our bus transits with plaques identifying them as Gemeindebau or "Social Houses" with dates ranging from the 1920s to the 1950s. Vienna's housing revolution dates to the years after WWI. The link gives an extensive history.

This particular complex, which seemed to go on for blocks, originated in this movement. It was built in the 1950s. Our guide told us that older apartments such as these are no longer desirable because of their small size, but nowhere have the complexes become the deteriorating poverty and crime ghettos that we have seen in US cities. 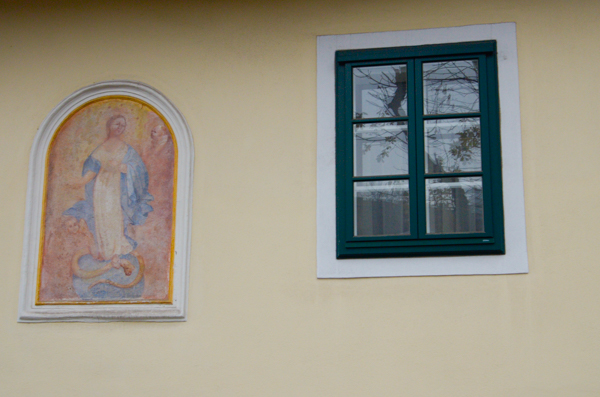 Our destination was the former village, now suburb, of Grinzing. It dates back to the 12th century and numerous old dwellings were still in use.

The ancient mural of Mary treading on a snake was preserved when this dwelling was restored. 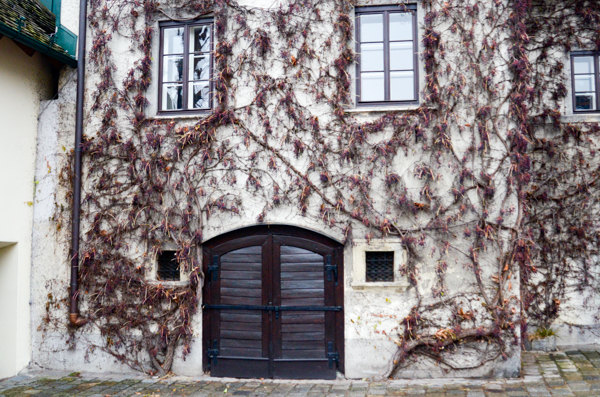 The village was once the low-cost residence of vintners and laborers, but in recent years it has become gentrified.

At this point I was concerned that we were about to have another slow-paced tour of an urban area, however picturesque. 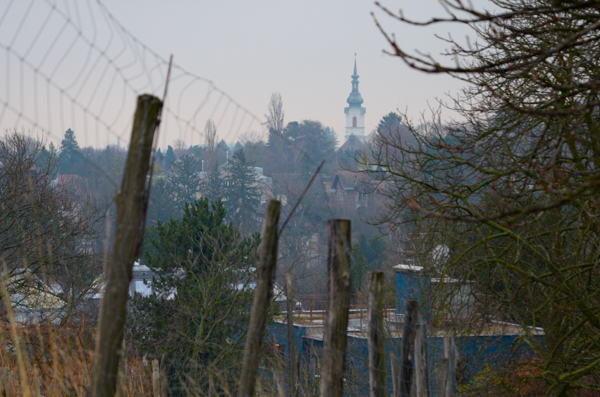 Not to worry; we were soon headed out of town. 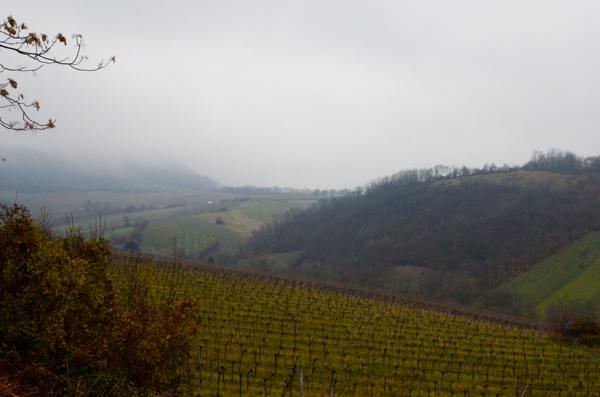 Into the vineyards. The weather threatened, but rain held off and we had a vigorous walk. Grinzing is on the edge of the famed Vienna Woods and I was glad we would at least get to the edge of the forest.

Our hike took us to the base of the hill half hidden in the clouds on the left and then back almost to our starting point. 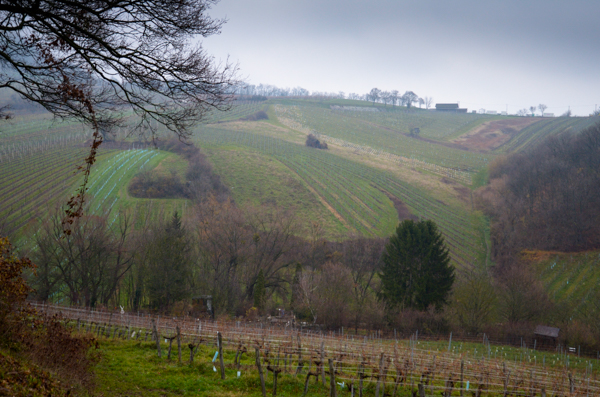 Popular local wines are Wiener Gemischter Satz produced from at least three varietals planted together in the same vineyard. The grapes are harvested and processed together to produce the wine. This differs from the cuvée system in which varietals are harvested and processed separately before being blended. Common varietals used are Grüner Veltliner, Weißburgunder, Müller-Thurgau and others. 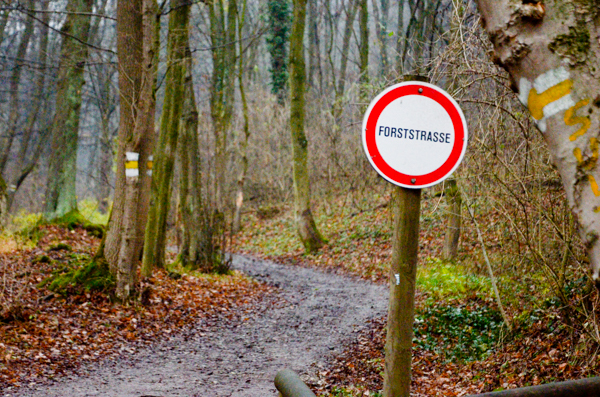 We got to the edges of the woods, which have many trails through them, but the wet and muddy conditions forced us to stay on paved roadways.

This boded trouble. After deviating from the standard route, our guide discovered that her cell phone was out of juice so she couldn't call the bus driver to apprise him of a new pickup point. A couple of us had phones, but the necessary number was inaccessible in her phone.

We soldiered on in faith that we wouldn't have to walk all the way back to Vienna. We had an appointment at one of the local Heurigen for wine and a snack, so as long as we got that far we would be happy. 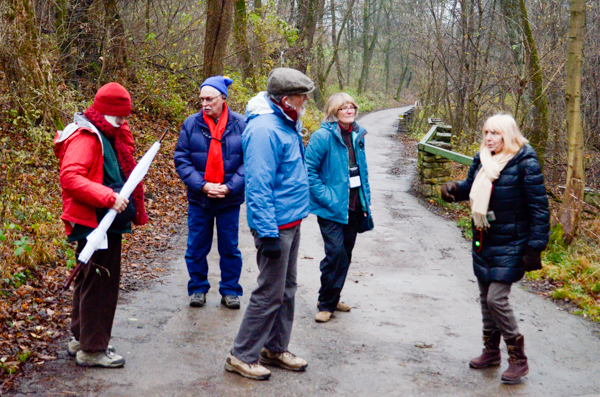 Our intrepid band included (L-R) Susan (underneath multiple layers of clothes), Art, Bill, Kathy and our guide, whose name I think was Martina.

We started the expedition by encouraging Martina to join us on the following morning for the museum tour. By the time we had wandered far looking for some way to charge her cell phone, we had cooled a bit on Martina. I'm ashamed to say that she rearranged her schedule for the following morning's tour, but our group uniformly chose another guide -- to her disappointment. Oh well. Apologies, Martina! 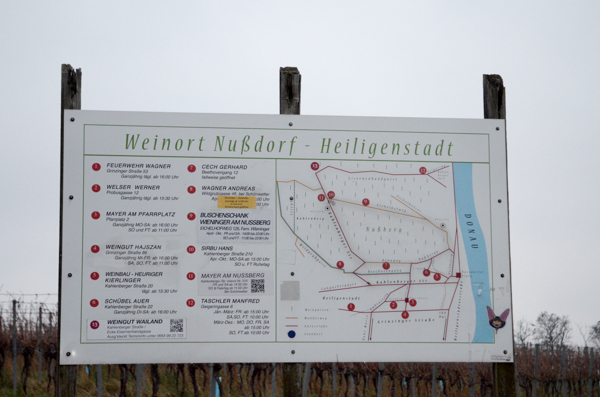 The area has an annual fall wine trail. Our guide said that she and her husband really enjoyed it the first few years, but that it is now so popular and crowded that they don't participate any more. 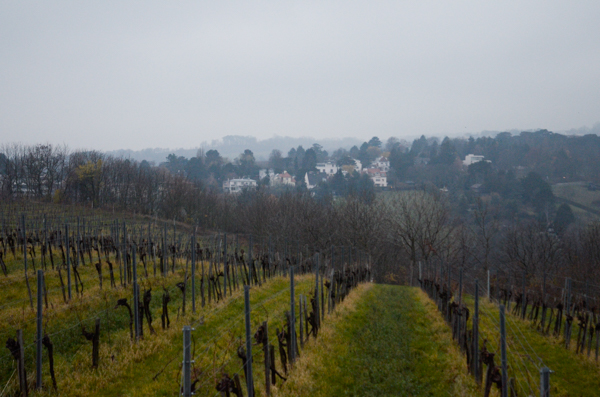 Looking back across the vineyards to the village where we started. 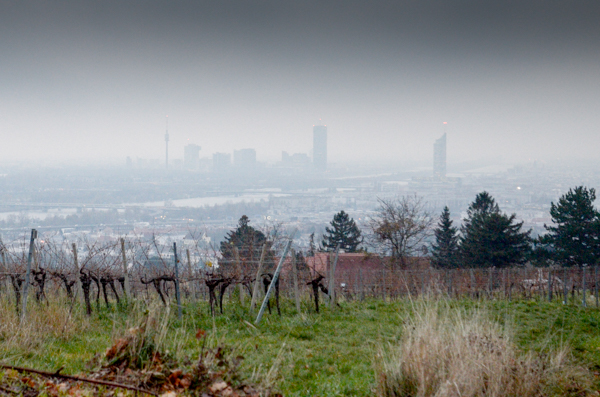 It is hard to believe that we are so close to the Vienna city center until we check out this view (very hazy and it's getting dark). The Danube can be seen running through the city. Our ship is docked somewhere between the two tall buildings, both of which were visible from our mooring. 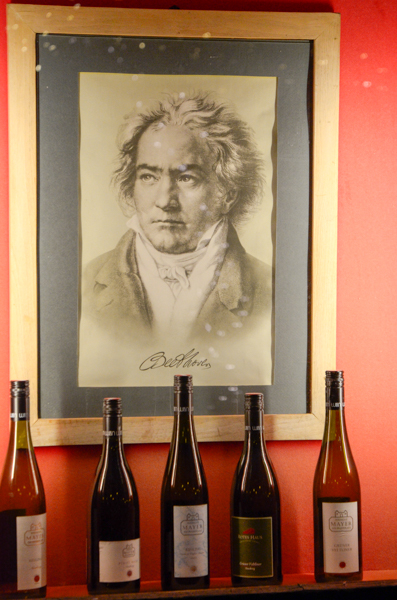 Finally we reached a restaurant where our guide could plug in her phone and we could all benefit from a much-needed bio-break.

Mayer am Pfarrplatz was one of Beethoven's summer residences. After our business was attended to and Martina contacted the bus driver, we made a short tour. 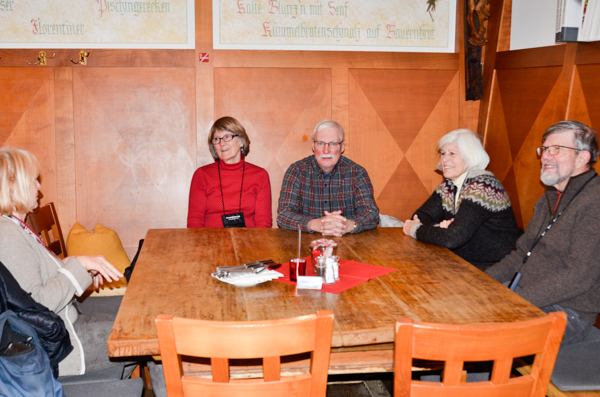 More anxiety was occasioned by the bus driver not quite understanding where to pick us up. It wasn't the first time I was glad we had Crystal Cruises logo buses because it was easy to see the bus as it drove past us going the wrong direction! We eventually connected.

We made it to our appointment for wine and a "snack," which turned out to be a full buffet. I'm sorry I didn't get the name of this restaurant, because the food was delicious (like we needed more food) as was the wine, which was Weiner Gemischte. I'd like to give it a good TripAdvisor review.

It was a wonderful afternoon in the country!