The next morning we arrived in Vienna where we would spend two days.

Neither Jim nor I cared much for Vienna. The first morning was a blur as we drove around town in a bus and heard much more than we could absorb. Things got better once we were off the bus and on our feet.

I can't say anything rational about the preliminary tour. It was a gift to escape from the bus and walk around.

The bus dropped us at the Volksgarten, more-or-less across the street from the Art History Museum in the background. This was once the location of the city fortifications, but after Napoleon demolished them the location was turned into a garden. Although once reserved for the nobility, in 1823 it was opened to the public.

We walked to Heroes' Square, featuring this sculpture of Archduke Charles of Austria. The statue is notable in that the horse & rider are balanced completely on the horse's back feet without any additional props. It was not the first to achieve this feat. That honor goes to the statue of Andrew Jackson, found in Lafayette Square and in Jackson Square, New Orleans. This one is much more dynamic.

The statue was not popular at the time it was installed because the conservative Austrian nobility thought it too avant-garde in its naturalism. 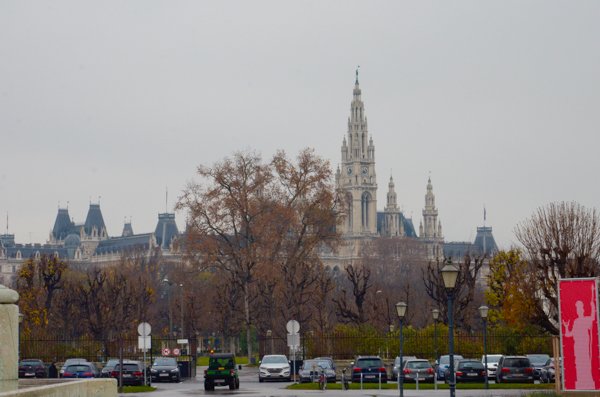 The 19th century Vienna City Hall or Rathaus is in the neo-Gothic style. At the time the emperor dictated that the tower be no higher than 99 meters. The architect complied with a tower that was slightly less than 98 meters but then put a 5+ meter statue on the pinnacle. The statue, Rathausmann, has no other purpose than to beat the system. (The picture is hazy because of snow.)

"Beating the system" rivals an Olympic sport in Vienna. 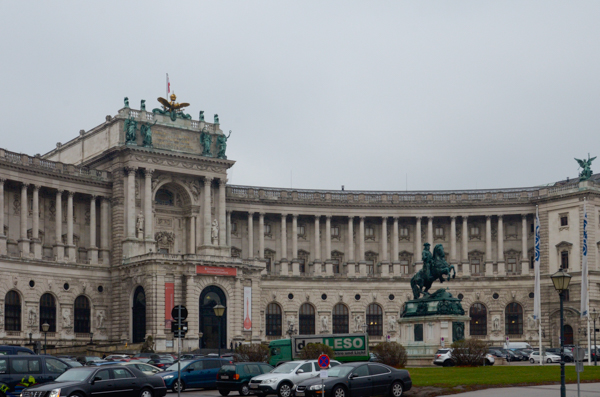 The Hofburg or Imperial Palace is an enormous complex dating back in part to the 13th century. This wing facing onto the Heroes' Square is the newest part completed in 1913. It was intended to be a part of an expansion that was never finished.

It continues in service as home of museums and also the seat of the Austrian Federal President. And the Spanish Riding School, which I will be visiting later. 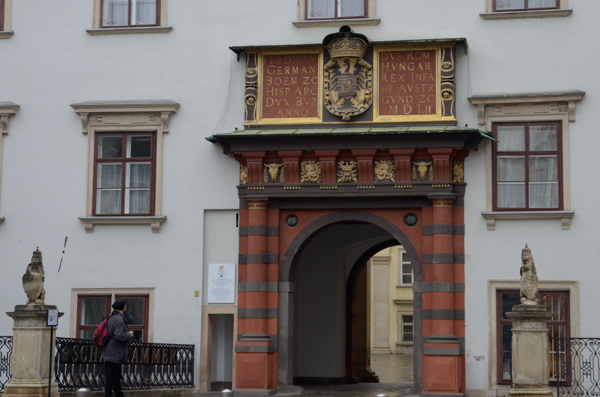 The 17th century Swiss Gate is the entry into the original castle. More details of the complex, including an aerial view, can be found at this link. 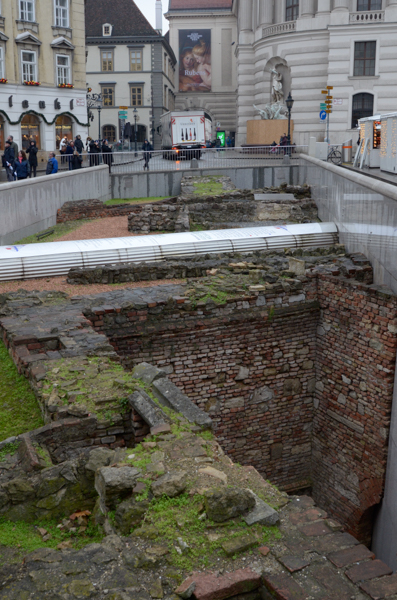 Vienna is located at the site of an old Roman camp, Vindobona. The Danube was the border of the Empire and the camp was part of the defensive network.

This excavation alongside the Hofburg shows infrastructure of the civilian city adjoining the camp. In the 1st century AD the estimated population was over 15,000.

The building to the left of the mural in the background houses the stables of the Spanish Riding School. 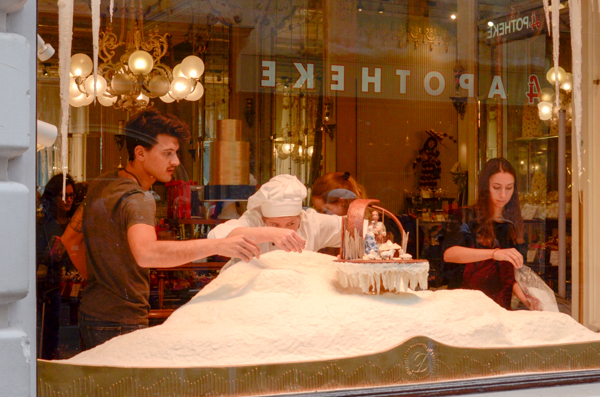 As we walked toward the cathedral, we passed the Demel Bakery, the establishment where Franz Sacher perfected his recipe for the famed Sachertorte in 1832. The rights to the Sachertorte name have been litigated over the years, but Demel is still famed for its culinary creations.

This team was putting together an edible show-window masterpiece complete with crèche. A helper with a video camera enabled the workers to check in real time how everything looked from the outside.

Not being a fan of sweets, I didn't sample the cake at either of the associated establishments. 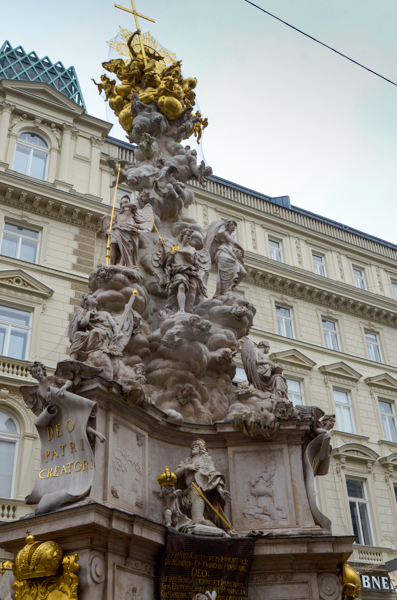 Nearby is a street called "Graben," or "ditch." It runs along the former moat outside the walls of the Roman camp.

The ornate plague column in the center of the street is dedicated to the Holy Trinity. We saw several of these during our travels.

The kneeling figure on the lower level depicts Emperor Leopold I praying for the end of the epidemic. 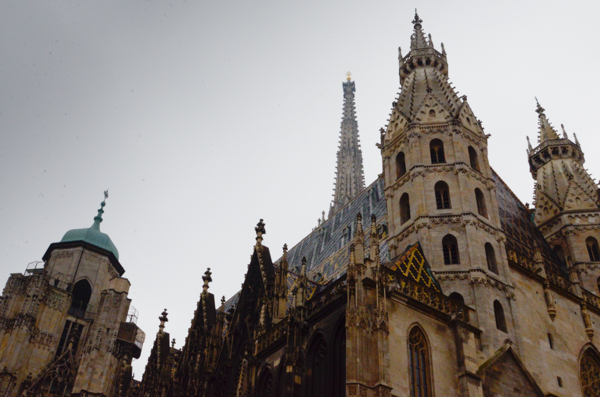 Our morning tour ended at St. Stephen's Cathedral. The first structure dates to the 12th century, but it was under construction and revision until at least the 16th century. Scroll down at the link for interior pictures. It was too dark inside for me.

The Romanesque towers on the right of this image are from the 13th century. The Gothic portions were started in the 14th. 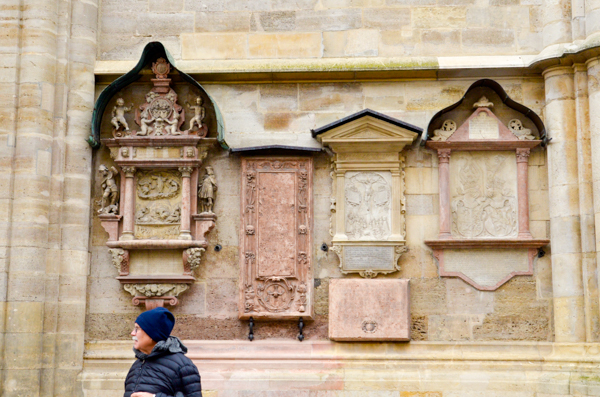 The numerous memorial plaques on the exterior of the cathedral were too weathered to read, but still handsome. 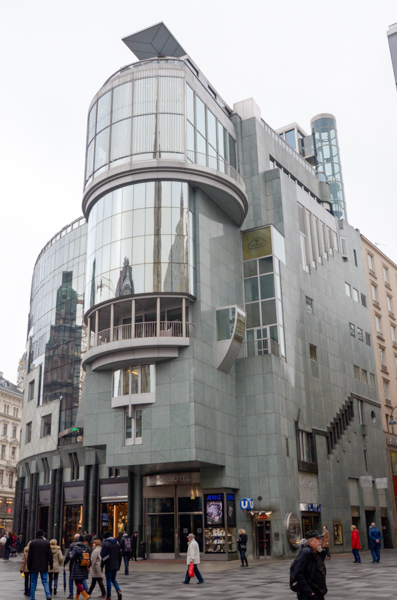 The hotel across the cathedral square is something completely different. I like it, but I expect it has detractors. 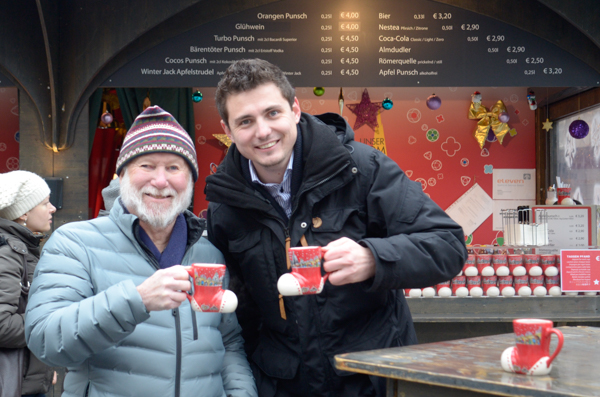 The high point of the morning was sharing a glühwein with our tour leader Balázs.

Jim and I returned to the ship for lunch and then I went out for a guided hike with some other Road Scholars while he took it easy.