Across Europe in Luxury
Passau

The Road Scholar program at Passau was a city walking tour, but I couldn't face yet another stroll through a charming Baroque town. Five other Road Scholars had the same idea and we signed up for a nature hike offered as one of the ship's other excursions.

Three rivers come together at Passau: the Danube, the Inn and the Ilz. The hike followed a footpath along the Ilz for about three or four miles. We enjoyed the fresh weather, which ran the gamut from snow to rain to sunshine, the exercise, and the opportunity to learn about the region's flora and fauna. 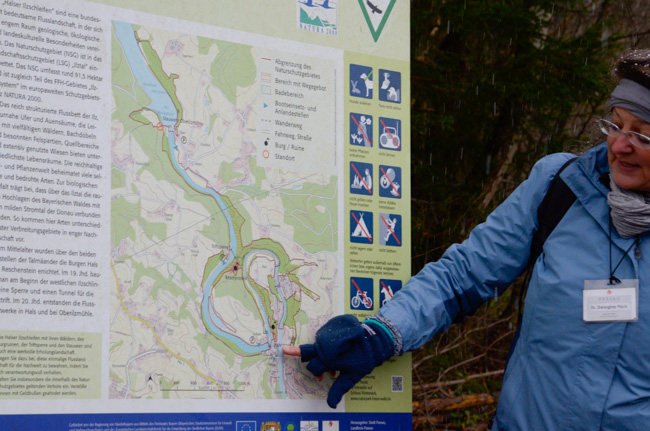 Our guide, Dr. Georgine Fisch, showed us the river's double loop. We will walk from the area at the top of the map, where the river forms a lake behind a dam, then through both loops to the town of Hals.

She welcomed us as true nature lovers since we had signed up for a hike on a grey snowy November day. She was also pleased to note that we had appropriate footwear. Yes, people will show up in high heels!

Crystal is the only cruise line that offers the nature hike. 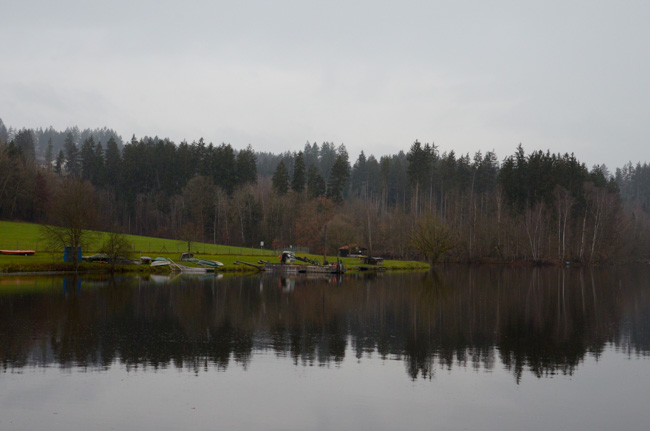 The lake upstream of the dam is used by the associated hydro-electric plant and also for recreation. 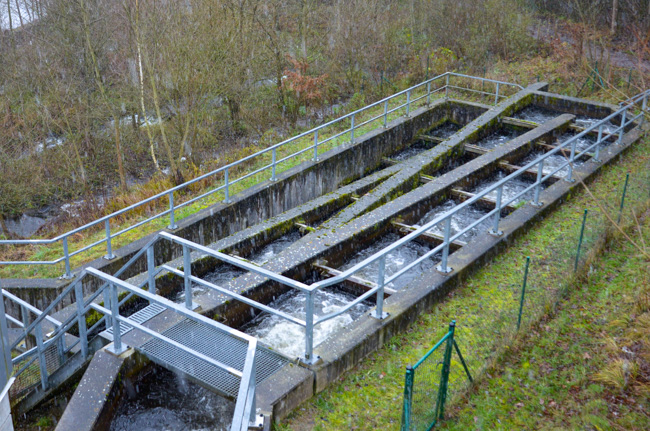 An extensive fish ladder allows migratory fish access to the river system upstream of the dam.

The white smears on the photo are snow. At this point it was snowing heavily. We were glad when that soon stopped. 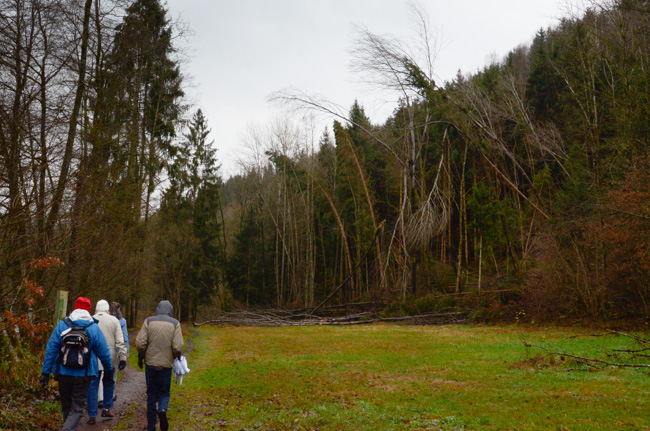 As we walked along, Dr. Fisch explained that there had been a severe thunderstorm this past summer. It brought microbursts that snapped off or leveled trees along the river. Many of the walking trails were still blocked.

The area is a nature preserve called Itzschleifen. The discussion at the link is the best online resource that I've been able to find describing the area and some of its built attractions. It's a blog, therefore liable to disappear, but I hope it won't. 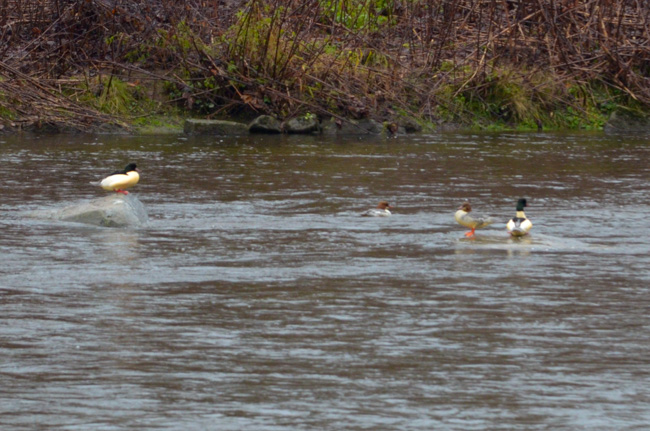 The focus isn't great, but these are common mergansers. The drake is mostly white with a greenish head. The hen is grey with a chestnut-colored head. We saw a number of them. 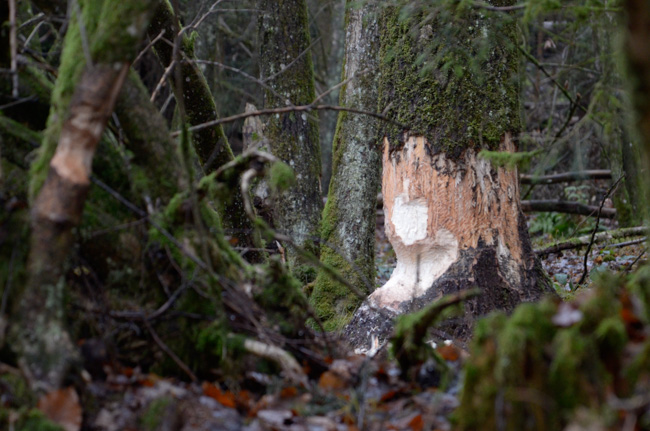 Along the way we passed a beaver den in the river. Later we saw a number of trees that had been gnawed by beaver. The Eurasian Beaver had been hunted almost to extinction but has recovered due to reintroduction programs.

This is a large tree and we thought the beaver may have been over-optimistic. 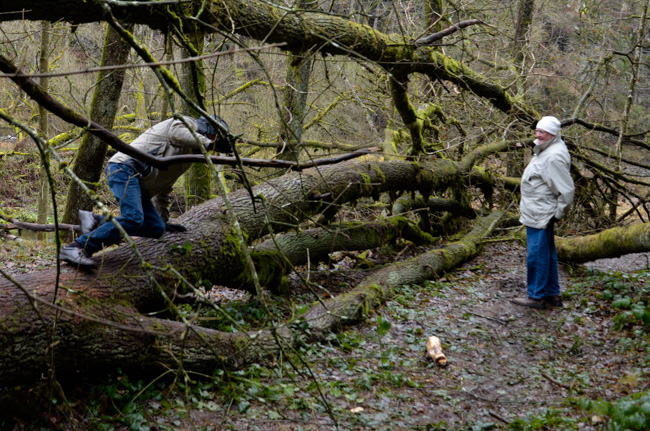 Although the trail had been cleared of trees downed by the microbursts, some weakened trees had fallen later. We had to scramble around or over this one.

I was glad I had worn my rain pants. Even though the rain & snow stopped, they kept my slacks from getting wet & muddy. 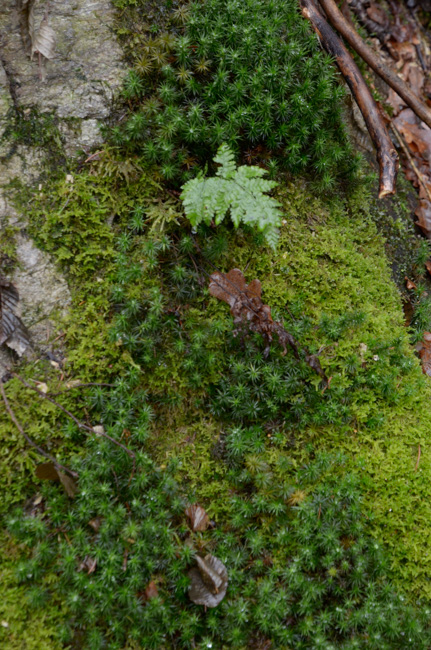 A pretty combo of mosses and ferns.

The nickname of the Ilz is "the Black Pearl." The river has been home to fresh-water mussels. These produce pearls in black & other colors and were once an industry here. The mollusks are now critically endangered due to environmental degradation. Conservation studies and reintroduction efforts are ongoing. The "black" part of the name doesn't come from the color of the pearls but from the dark waters of the river. 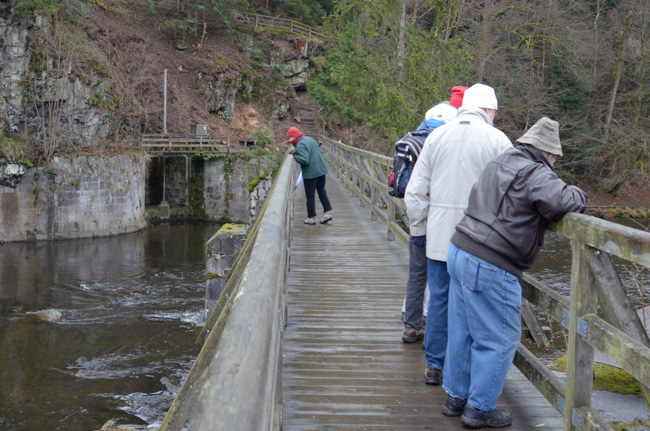 This footbridge is built on piers remaining from an older bridge across the Ilz at the mouth of this diversion tunnel. One of the former industries, before the building of the dam upstream, was logging the Bavarian forests and floating the logs downstream to a mill near Passau. Getting the logs around the loops in the river was a major problem, so the locals dug this short tunnel through the neck of the peninsula to shorten the way. A screen placed between the piers captured the logs, which were then diverted into the tunnel.

Logs are no longer floated down the river, the tunnel is blocked by a gate, and the old roadbed has been replaced by this walkway that allows access to hiking trails across the river. 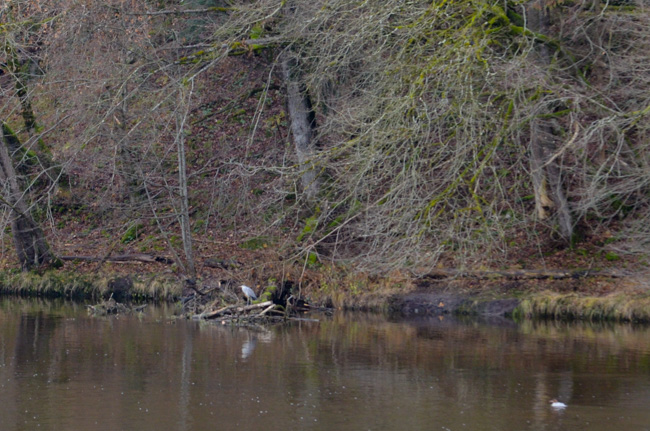 A grey heron sat motionless on the riverbank upstream of the bridge all the time that we were there. 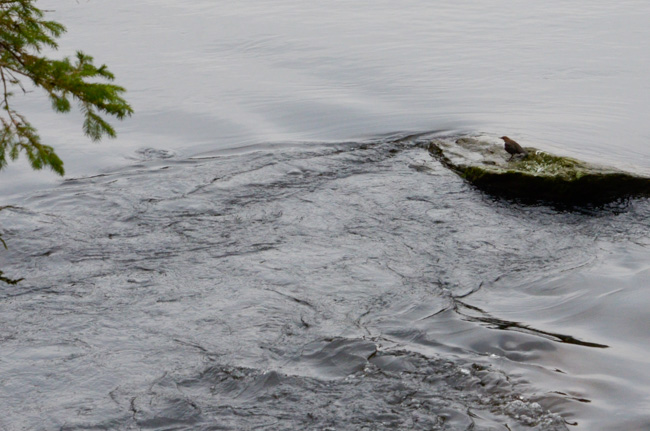 The white-throated dipper on the rock was also just upstream of the bridge. Although it approached the water's edge, we never did see it dive. It eventually flew away. 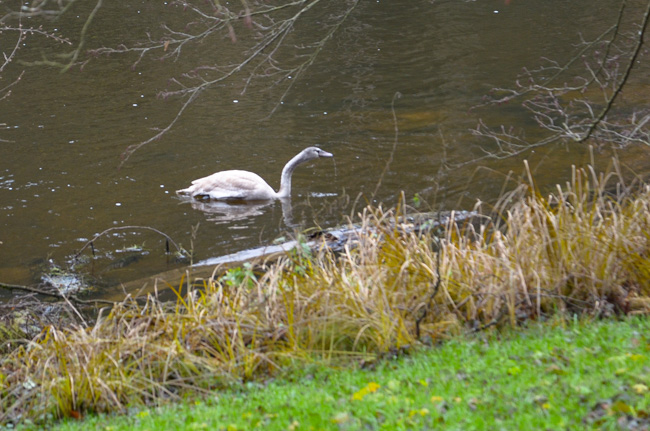 Dr. Fisch said it was unusual for this cygnet to be without its parents. It may have left in a fit of adolescent rebellion and was quietly feeding on the bottom weeds. 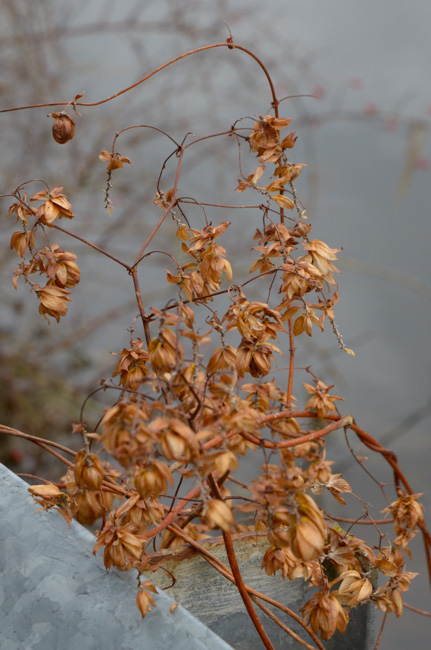 I really impressed the guide by recognizing this plant as hops. (I don't know why she was surprised; it looks just like hops.) Hops grow wild in this area, like this one climbing up a roadside barricade by the river. Almost all the plants had entered winter dormancy, so we didn't get to see any other wildflowers. 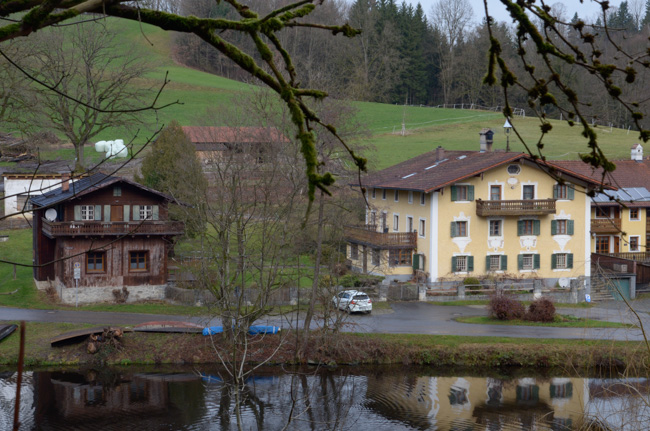 As we neared Hals, we began to see more "civilization." This area is frequented by locals in the summer: the old swimming hole.

I had earlier stumped Dr. Fisch by asking if there were bridle trails in the area. First I had to explain what a bridle trail was. She said that no one had ever asked that question before (no surprise there). Bottom line: she didn't know, but rather thought not.

The building in the background hidden by the trees was a stable. It runs a riding program and has recently expanded. I pointed out that if there is an expanding riding program, there are certainly bridle trails, especially since there was no riding arena. She agreed that she would research the matter in case someone else had the same question. 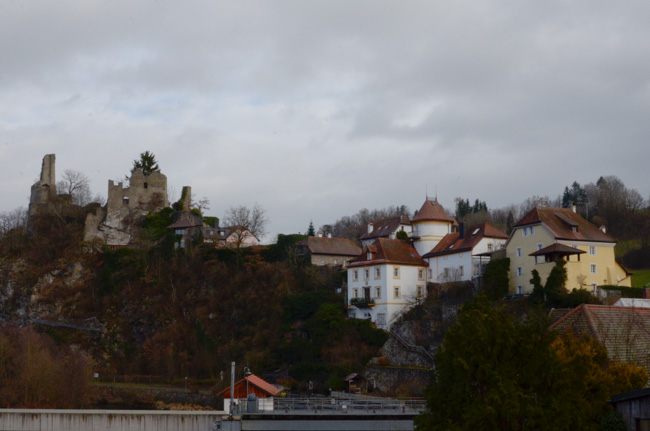 The ruins of Spornburg Castle lie above Hals, which spans a narrow rocky neck.

A small dam and tunnel divert water through the rocks to a hydro plant in Hals. Although we could have cut across here to our destination, we chose to continue our walk around the lower river loop. 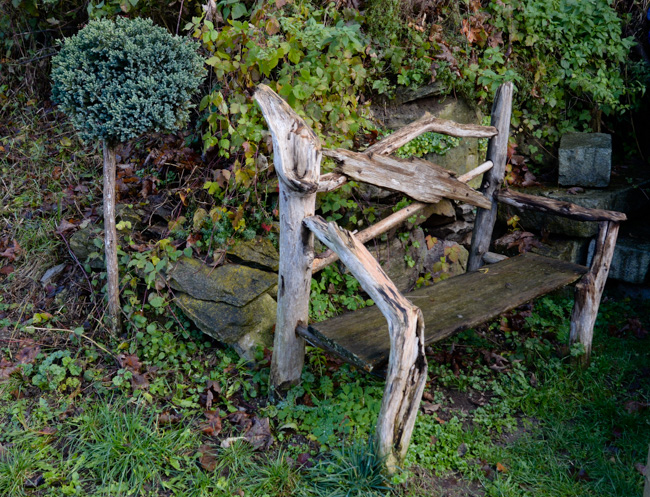 This driftwood chair next to the trail may be attractive, but doubtless fiendishly uncomfortable! 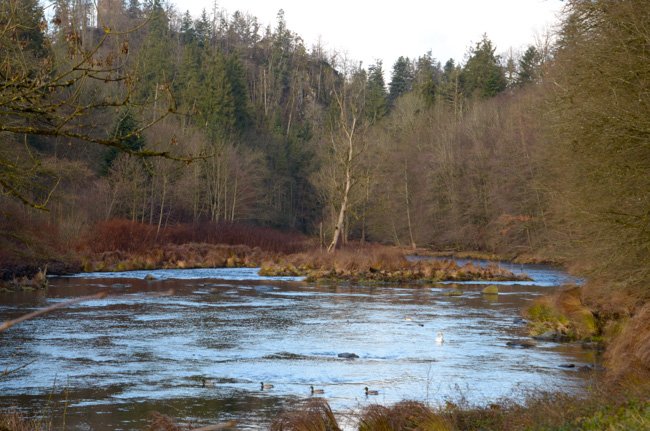 The Ilz is a pretty river with lots of birdlife. I was glad to have come on this excursion -- especially now that the sun is coming out. 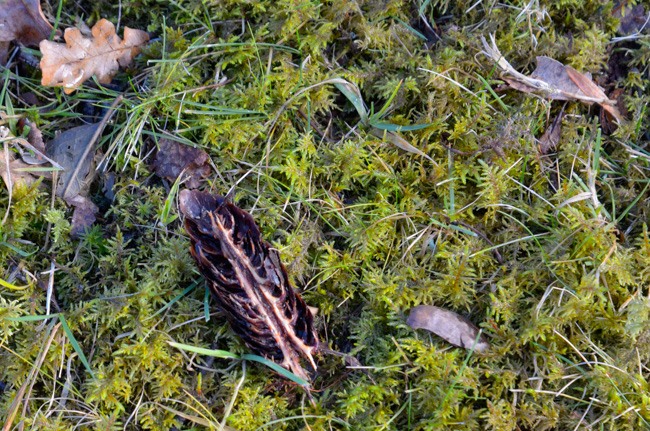 I don't know what had cut this fir cone exactly in half, but I was fascinated by its internal structure. I think our guide identified the specific tree it came from, but I don't recall what it was. 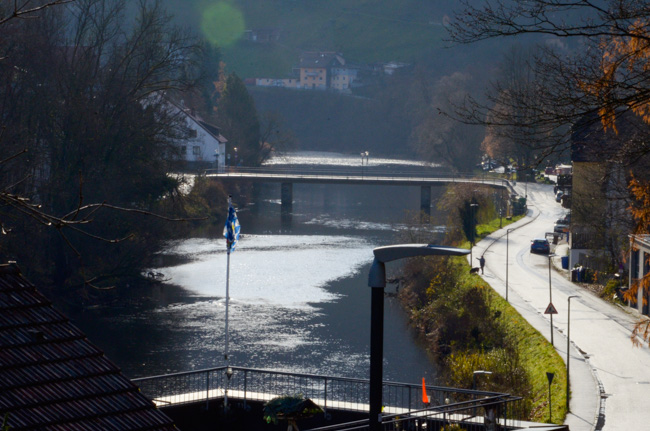 We have walked up (up ... up) and around the lower loop of the river and are now descending into Hals. I was amused by the common thread of conversation about how to protect aging knees on steep downhills. I'm not the only one! 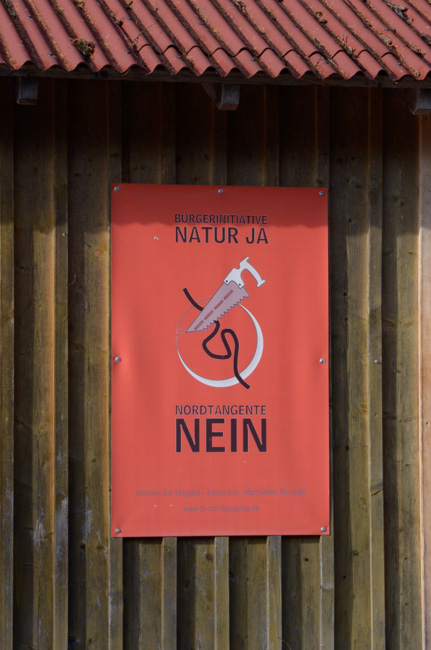 This sign is a protest against a proposed highway bypass around Passau. I saw several of them. Although I couldn't find an English resource online, here is a translation (thanks, Google) of a website maintained by the Bund Naturschutz in Bayern (Organization to Protect Nature in Bavaria):

The planned route touches two river valleys of national importance, which are therefore protected accordingly.... The Ilz is one of the last natural rivers in the whole of Germany. The river valleys are important migration corridors: for otters, beaver, black stork even for the lynx. The planned route cuts through these corridors and thus seriously threatens these protected species. The affected forests are very close to nature with individual ancient oaks. These forests play an important role in pollution control (dust, noise) and climate protection (carbon sinks).

I wish them luck. The river and its valley are worth preserving. When revisiting this topic in 2020, I was unable to find any new news. 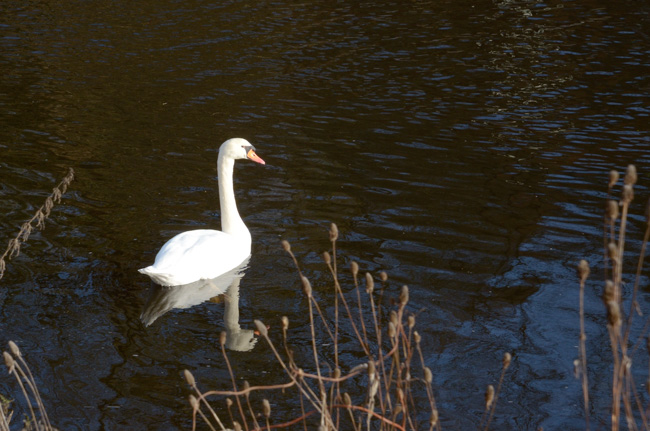 There were a couple of swan families on the river. We could tell they were town birds because they headed straight for us tourists and begged for treats. Country birds didn't give us the time of day. 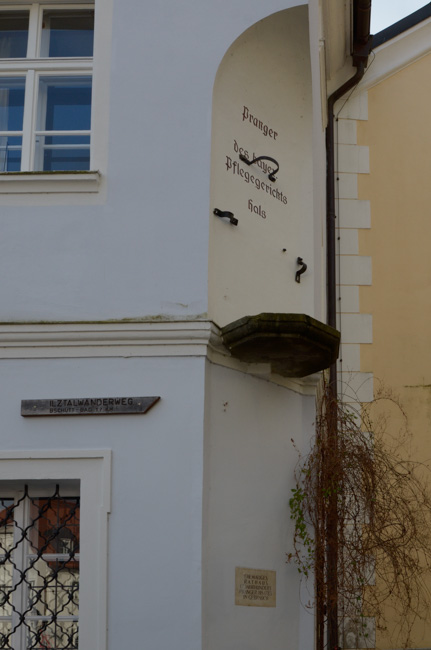 I have seen pillories in restored New England villages, but nothing quite like this.

The convicted criminal was taken up by ladder and secured by the neck and wrists for the period prescribed by the court. The guide said that they would be allowed down at night even if the sentence was for multiple days. 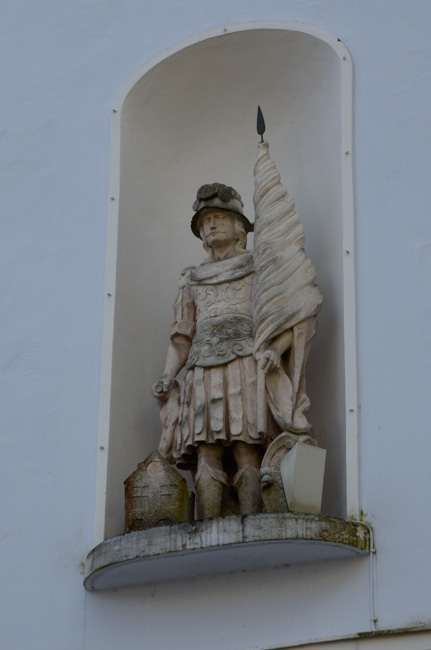 I have already mentioned St. John Nepomuk. Another saint that we saw frequently depicted was St. Florian, who protects against fires. Hals has suffered from fires. St. Florian was usually depicted with a bucket.

When walking through the town, we passed a large and seemingly well-equipped volunteer fire department. 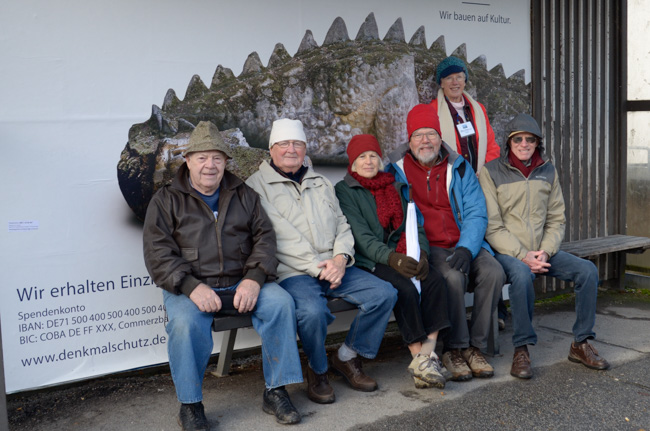 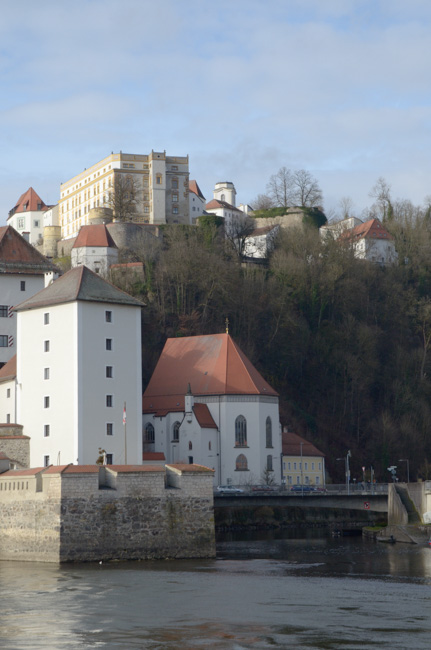 The ship departed not long after we returned from our morning's walk.

As we pass into the Danube, the Ilz joins the main river underneath the height of the Veste Oberhaus.

Shortly after leaving Passau, we enter Austria and the next phase of our journey.

That afternoon Balázs treated us to another lecture: this time on the 20th century history of Central Europe. Even though the focus was on modern history, it had to start with the shifting alliances of the past.

We Americans, who often have the vaguest ideas about Europe in general, may be aware of the many VERY newly independent European nations: Slovakia, Slovenia, Bosnia, etc. We may not, however, be aware that nations that we take for granted, such as Germany, Italy, Austria, Hungary, etc. only gained their current form in the past 100 years. And the map is still changing.