Across Europe in Luxury
Introduction to Passau

After our visit to the monasteries, we travelled to Passau on our bus. While we were seeing the sights, the ship had been wending its way along the Danube to a docking place just upstream of town where we would meet it. Our guide was in no hurry, however, so we traveled through many villages, all with their churches, Maypoles, and (presumably) their chestnut trees. 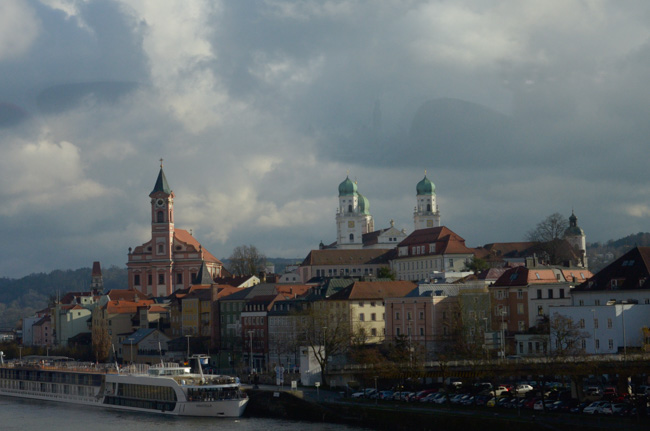 The town center as viewed from the bridge across the Danube. The following day's Road Scholar program would be a walking tour of this area. Our ship would dock here overnight, but it wasn't there yet. 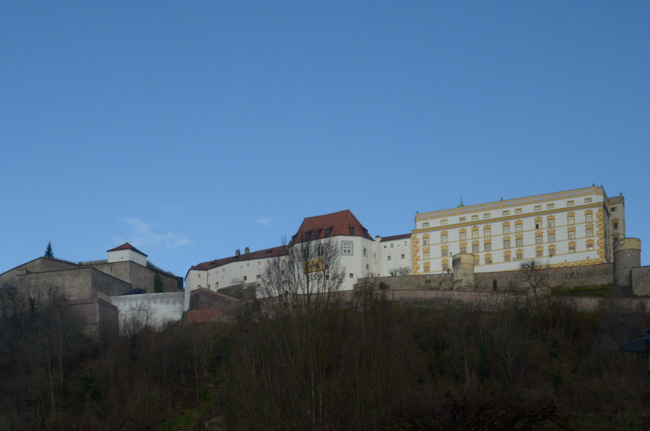 After a brief drive by the cruise dock, we climbed the bluff overlooking Passau to visit the Veste Oberhaus, a fortress that served the Prince-Bishop of Passau. It was first built in the 13th century, but like everything else, has been modified.

The fortress was attacked five times from the 13-15th century, twice by the citizens of Passau who wanted to become independent of the Prince-Bishop's domination. None of their attacks were successful, but later attacks by various forces were. 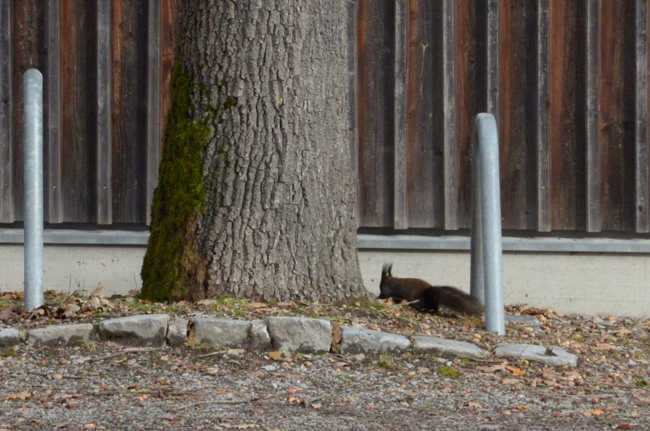 As we got off the bus and headed to the fortress, I spied this red squirrel foraging under the tree. He (or she) was too quick to sneak up on for a better picture. 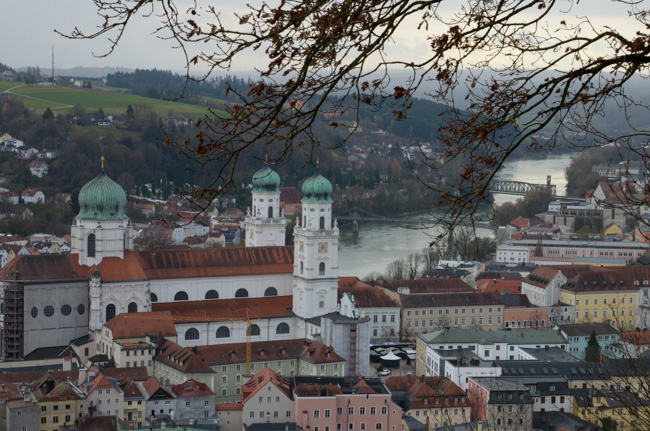 An overview of Passau shows St. Stephen's Cathedral with the Inn River in the background. Passau is at the confluence of three rivers: the Inn, the Danube and the Ilz. At this location the Inn is larger than the Danube. The Ilz is much smaller than either.

In ancient times the Danube was larger, but a sinkhole in the upper Danube diverts much of its water to Lake Konstanz and the Rhein. At some point the entire upper Danube will be captured.

After our brief visit to the fortress, we got back on the bus and drove upriver to meet our ship at Vilshofen. 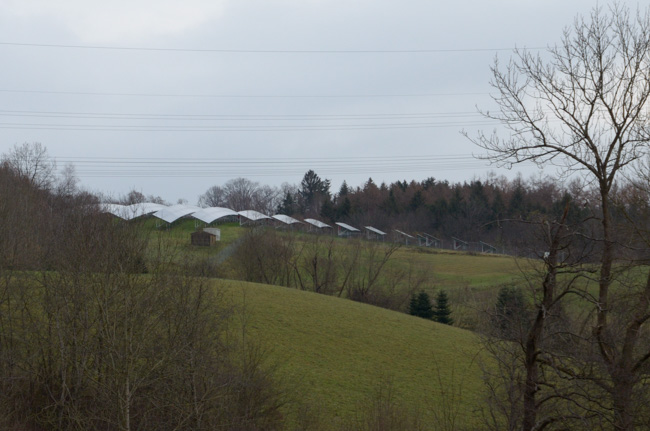 The ship started downriver toward Passau as soon as we arrived. We need to pass a major lock and there was a traffic jam so progress was slow.

One of the sights along the river was this large solar array on a hillside pasture. 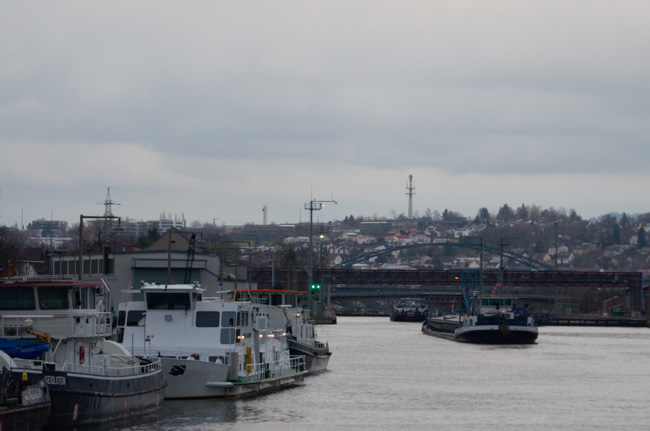 Queuing for the lock. We'll travel with the two ships in front of us. 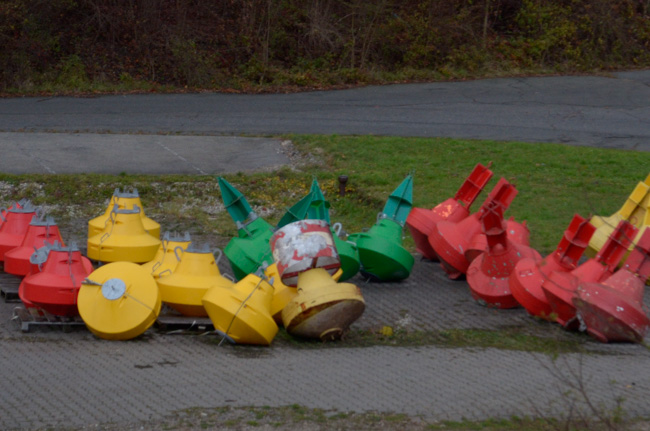 As we wait our turn, my interest was captured by this array of channel markers. I know about red & green, but yellow? Google tells me that they are "special" markers used for a variety of things, but not to mark hazards. 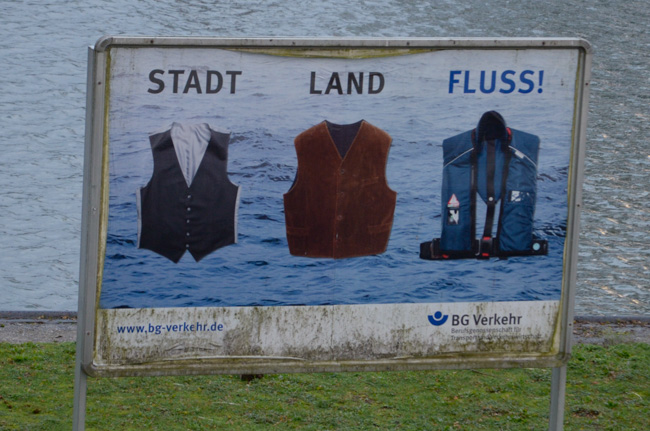 This admonition about wearing a life vest doesn't need translation, does it? 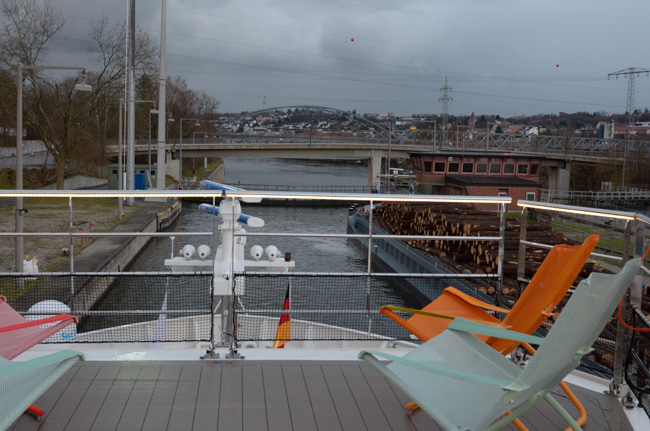 Our ship creeps into the lock alongside a freighter and a log barge. There isn't any extra room. 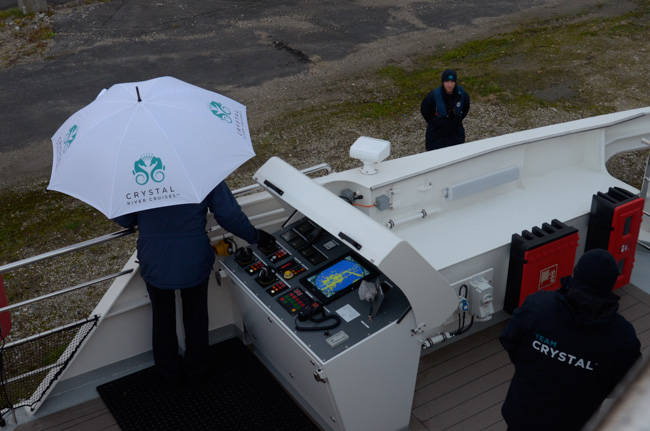 For all lock transits the captain came out of the main bridge to operate the ship from this remote bridge. He could peer alongside the ship to make sure it was clearing the side of the lock. The controls governed the forward thrust as well as the bow and stern lateral thrusters. The ship could go forward, backward and sideways as well as pivot around its center.

The seamen on the land moored the ship within the lock. The more modern locks had "floating" mooring hookups that rise or fall with the water level. Older ones required more interaction to adjust the moorings as the water level changed. 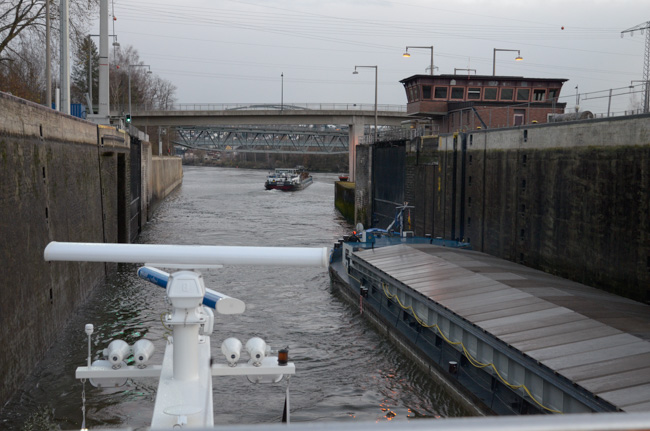 The lock ran on a "first in first out" algorithm. When it was time to leave, the log barge cleared first, then the freighter and finally us.

The slow part of passing a lock is getting in. Once everyone is situated, the water level changes rapidly. 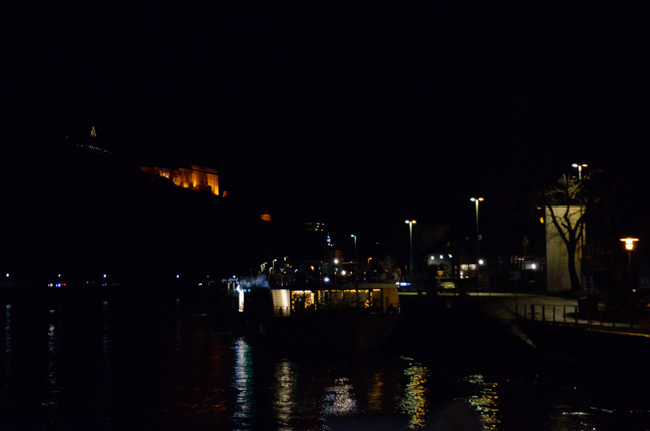 The cruise dock and the fortress by night.

The Munich excursion contingent arrived back late and cranky -- barely in time for supper.