Across Europe in Luxury
Deggendorf

There were two options today: a tour of Deggendorf with introduction to Passau or an extended bus ride to Munich. We have been to Munich and don't see much point to long bus rides, so we declined that option. From what we heard, that was definitely the better choice.

Starting with today we were "really" in Bavaria. Our local guide here was as dismissive of Franconians as Franconians were of Bavarians. 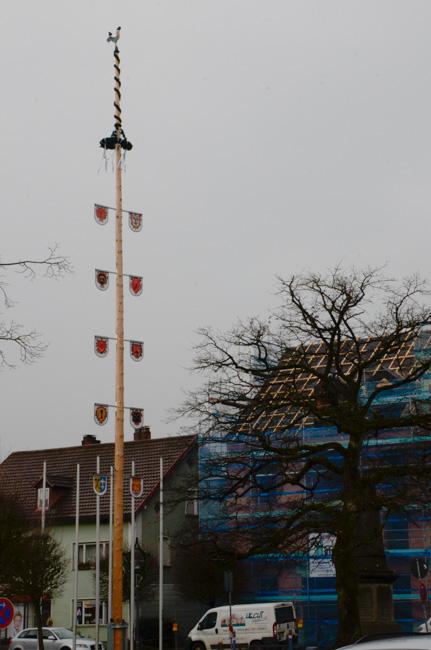 Although the excursion was listed as a "guided walking excursion of Deggendorf" we spent precious little time in the village. We had a bus cruise through some of the high spots.

The one thing that remains with me is the Maypole. Our guide said that there are three key ingredients of a Bavarian village: the church, the Maypole and the chestnut tree. The chestnut is the iconic tree of the Bavarian Biergarten. The marriage of chestnut and beer started no later than the 19th century and may have started sooner.

The guide pointed out the maypole in every village we entered. The chestnut trees were hard to identify without their leaves. (I wonder if the tree in the picture is a chestnut?) 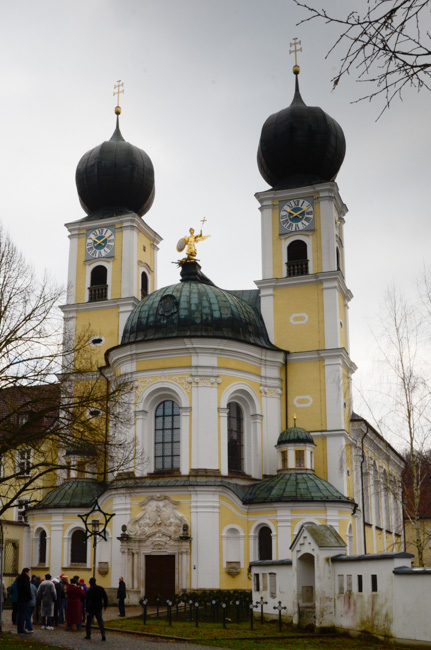 Our destination was Metten Abbey. The Abbey was founded in the 8th century and its members were very active in education. The library is said to be spectacular.

The abbey church is dedicated to St. Michael. I don't recall if we were told its date of construction, but it is baroque in its current form. 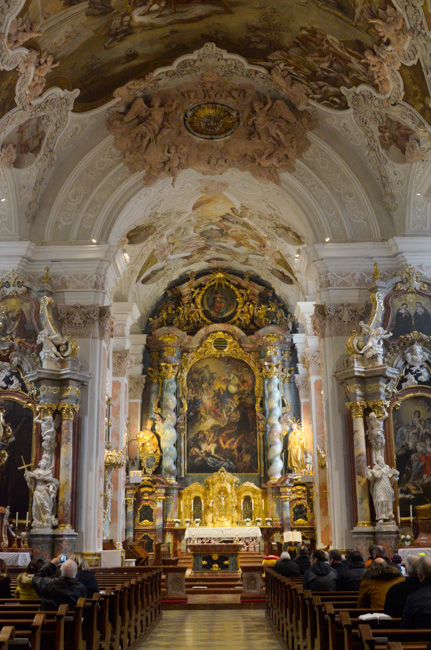 I am not fond of Baroque architecture or decoration, but this was the prettiest example we saw. It was Sunday and a service was about to begin, so we just had a quick duck-in for a picture. (It was OK to take a picture as long as we didn't photograph any of the worshipers.)

That is one thing that I miss on these trips: the opportunity to go to Sunday worship. When traveling on my own, I search out local churches. It's a great way to experience a place and meet some nice folks too. Group tours almost never allow a Sunday off -- with a notable exception when we were in Israel. 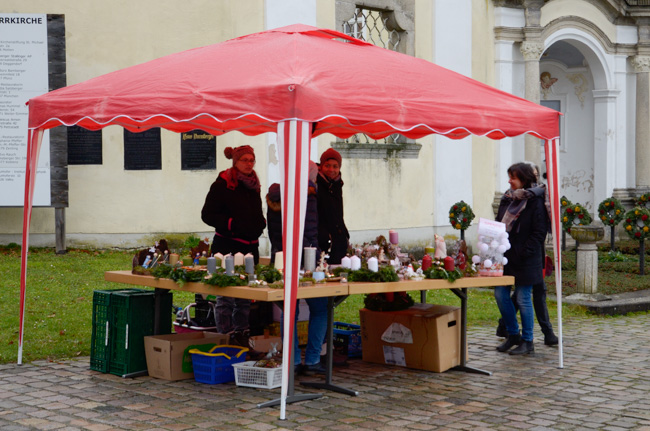 This stall selling advent wreaths was set up in the courtyard outside the church. 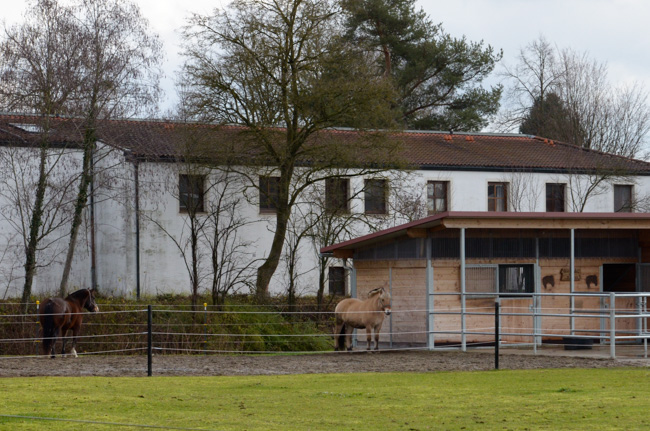 Our next stop was at Niederaltaich Abbey. As everyone else headed for the church, I ducked out to get a picture of these two horses stabled nearby. The dun on the right is a Norwegian Fjord. I can't identify the dark bay. 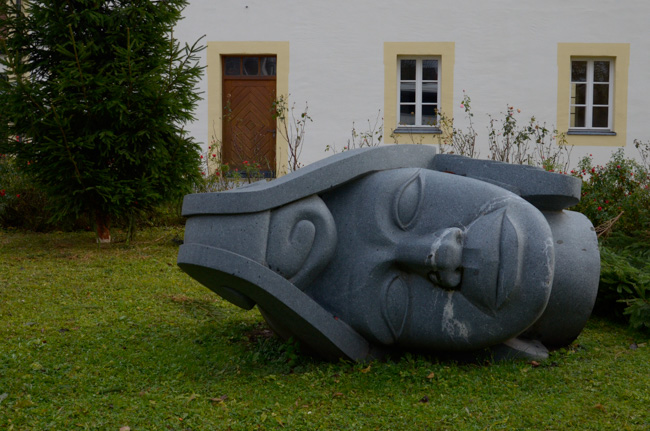 This disembodied head represents St. Maurice, a Roman soldier and commander of the Theban Legion in the 4th century -- also a Christian.

He is pictured as an African. St. Maurice and some (or all) of his legion were martyred either for not worshiping the Roman gods or not engaging in wanton killing. He is venerated in Europe (St. Moritz is named after him) and in the Orthodox tradition. He was a patron saint of the Holy Roman Emperors and also figured large in the Austro-Hungarian Empire. Niederaltaich Abbey is dedicated to him.

This head is reminiscent of the ruined monuments of Gondor in Lord of the Rings. Since it was dedicated in 2009, perhaps the artist was thinking of them. 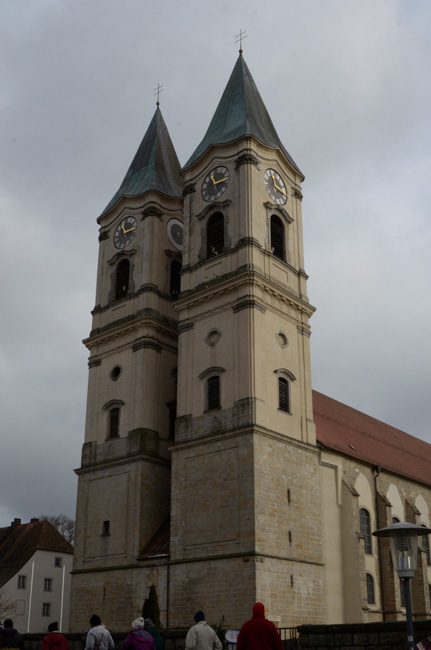 The abbey was founded in the 8th century. The abbey church, St. Maurice, is Romanesque on the outside, but was renovated in the Baroque style in the early 18th century.

It survived fires, war, and floods, but it didn't survive Napoleon. He secularized it in 1803 and it fell into disrepair. Since its revival in 1927 it has become a focal point of ecumenical outreach -- especially to the Eastern Orthodox church. 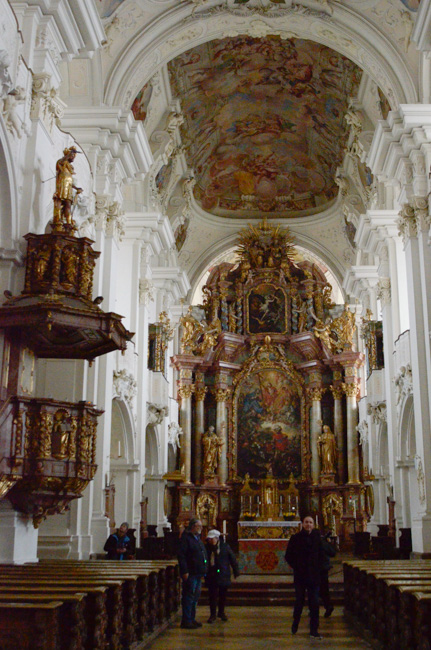 Definitely in the Baroque style!

The paintings illustrate the legend of St. Maurice.

We were told that the exuberance of the Baroque makeovers of Catholic churches was a deliberate action of the Counter-Reformation. The Protestant focus was on scripture, the written Word, and their churches were plain to the point of austerity. Most of the populace at the time was illiterate so the Roman church doubled down on imagery.

Prior to the Reformation, the Catholics emphasized sin and hell to further the sale of indulgences -- a major source of income. Martin Luther focused on this abuse in his 95 Theses. The Baroque reaction downplayed judgment and emphasized a heavenly vision in the new artworks.