Across Europe in Luxury
Regensburg

At Regensburg we encountered some of the most miserable weather in the entire trip. Too bad because it seemed to be a charming town. Like Bamburg it is also on the UNESCO World Heritage List. It was our first stop on the Danube. 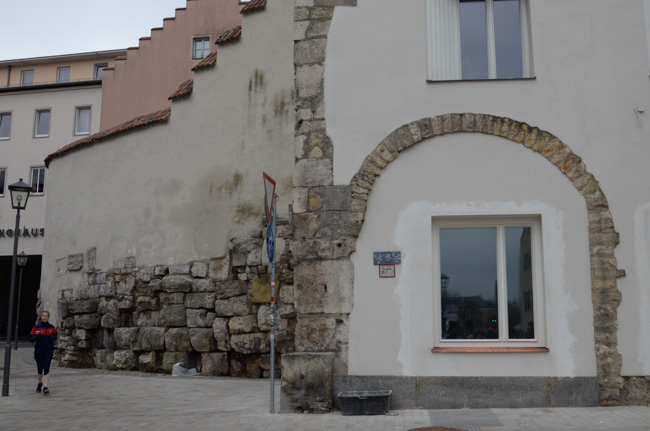 The site of the city has been occupied since the Stone Age, and the Romans constructed an outpost here in the 2nd century. The remains of the walls around their camp have been incorporated into newer buildings such as this one. 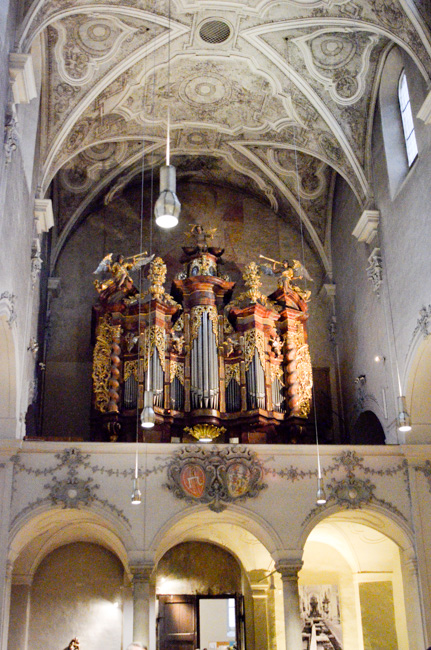 We enjoyed an organ concert at the Nieder Münster church. I've not been able to find any online references in English to describe this church or its organ. The church is Romanesque and was built in the 12th century.

The young man who presented the concert announced that his specialty was improvisation. His concert included, he said, three pieces: one with an "antique" flavor, one with a romantic flavor, and one with the flavor of Bach, i.e., Baroque. There were only a few recognizable Renaissance themes in the antique improv. I'm not hip on Romantic music, so can't comment on that, but he hit his stride when he got to the Baroque improv. The organ itself was Baroque and that must be where his heart lies.

There are concerts at the church at 12:05 every Saturday. They range from Renaissance madrigals to jazz. There was one scheduled right after we had to leave. It featured the music of Nick Drake. I had never heard of him before and now that I've had a chance to research him, I'm sorry we didn't hear that instead of Mr. Improv. 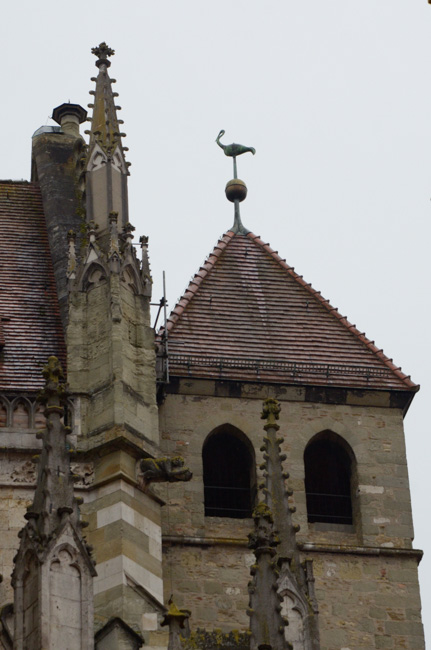 After the concert we walked toward the cathedral.

The current Gothic structure replaced an earlier Romanesque one. The work was done in sections and this tower, part of the older structure, was used to transport building materials to the upper levels. Our guide said that the original intent had been to tear it down after the new cathedral was finished, but the builders discovered that it would weaken the structure so it remains. It's called the Donkey's Tower because "donkey" was the designation for the goods lift. We use a similar designation, donkey engine, for a powered winch or pump.

I forget what the crane finial signified. Unless.... "Crane" in English can be used for the bird or a hoisting device. In German "Kran" is the hoisting device and "Kranich" is the bird. It's possible that the finial is a visual pun. 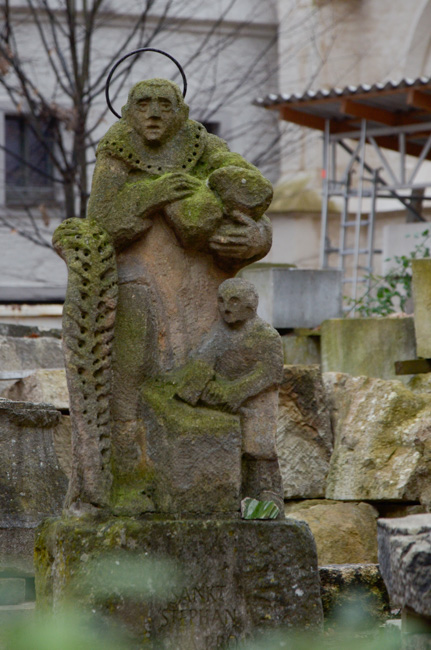 Behind the cathedral is a workshop (Dombauhütte). Master builders run a school for stone carvers and restorers. Old stone work is repaired and new carvings are created. 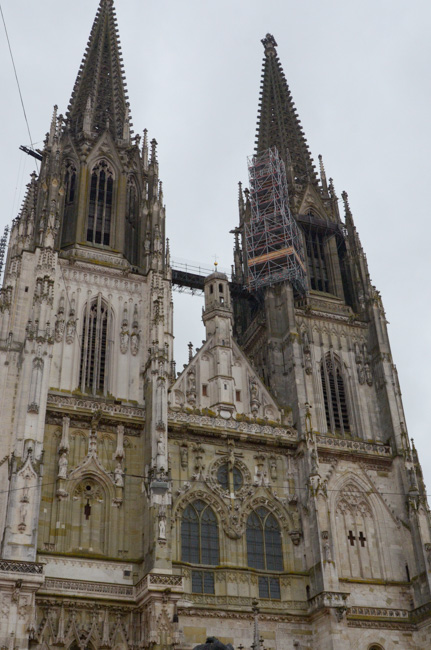 The greenish stone on the cathedral facade is from earlier restoration projects. White stone that better matches the original is replacing it.

The cathedral is said to be the best exemplar of Gothic architecture in Bavaria. It was under construction for about 600 years and only completed in the late 19th century. 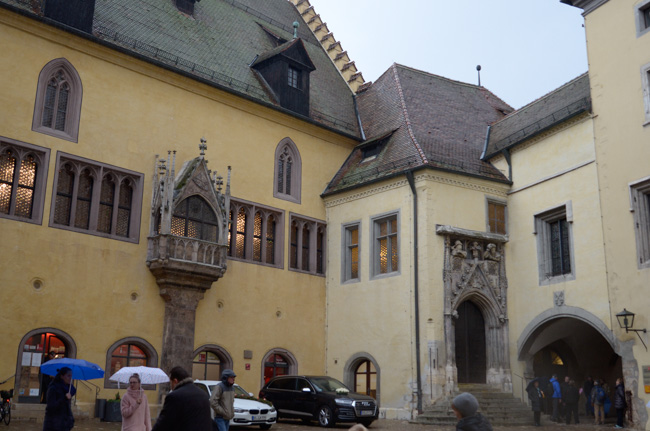 The Regensburg town hall was built in three sections. The oldest, dating from the 13th century, is on the left.  A new Baroque building was added to expand the space in the 16th century. It can just be seen on the right. The officials got tired of going out into the cold and rain between buildings, so they commissioned a connecting section between them.

There was a wedding reception going on in the connector while we were there. 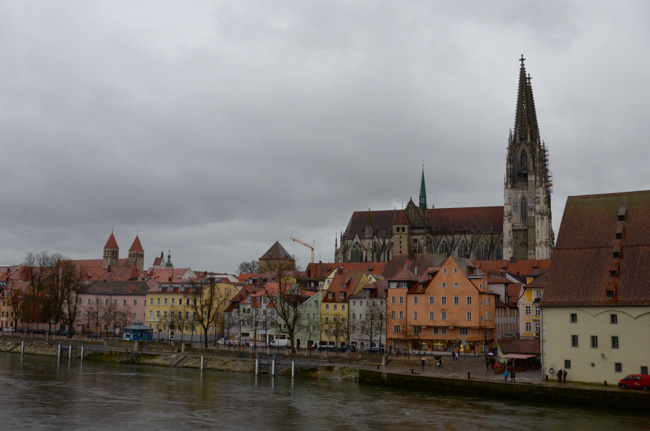 After our tour we had the option of shopping, visiting the cathedral, going back to the ship, or finding a bite to eat in town. Balázs had been singing the praises of the Historic Sausage Kitchen in the pale building on the right of this picture. We made a beeline for it and found that a number of other Road Scholars had done the same, including Balázs.

The specialty of the house is bratwurst and it was very good. Balázs said that the traditional beverage to accompany it is Weissbier, but neither Jim nor I care for it. Jim got regular lager and I got white wine, which came in a lovely quarter-litre carafe. We've been searching for a carafe of that size for some time and offered to buy it from the restaurant. The waitress said it wasn't for sale, but that if it disappeared no one would notice. It's a very nice carafe. We left a very good tip. 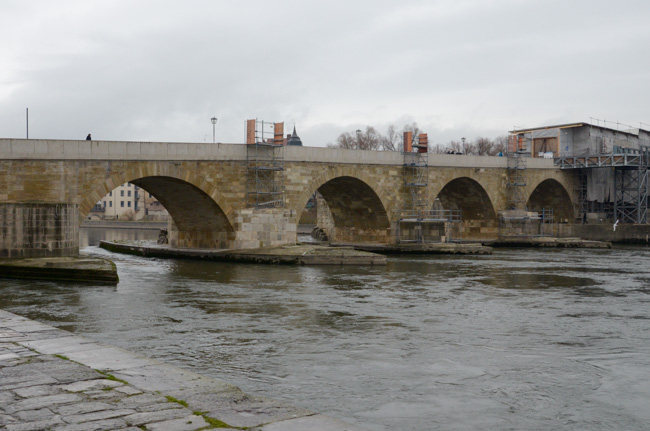 The Stone Bridge crosses the Danube beside the building that contains the Sausage Kitchen. It was built in the 12th century and was used by vehicular traffic until 2005. It is now pedestrian only. The many years of heavy traffic have taken their toll and the bridge is undergoing extensive conservation.

It was the only bridge across the Danube in the vicinity until well into the 20th century and played a major role in the city's becoming a commercial hub.

The above picture was taken from the bridge.

The south tower is the only one remaining of the original three towers associated with the bridge. I suspect it is not original, but the city gate would have been here. 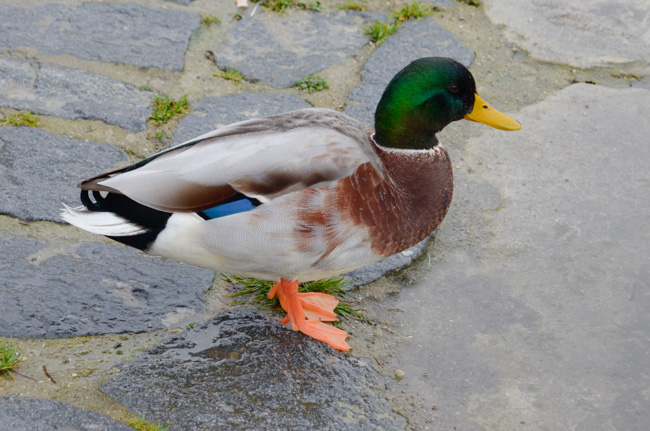 After lunch Jim & I walked back to the ship along the river. On the way I got this picture of a very bold mallard. They are handsome birds even if they are as common as dirt. 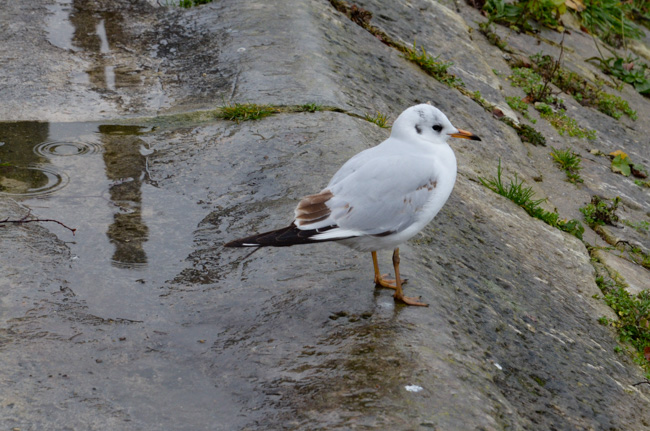 I also got a picture of this water bird. We saw them all over during our trip. It may be a juvenile little gull or, more likely based on the bi-color bill, a non-breeding black-headed gull. 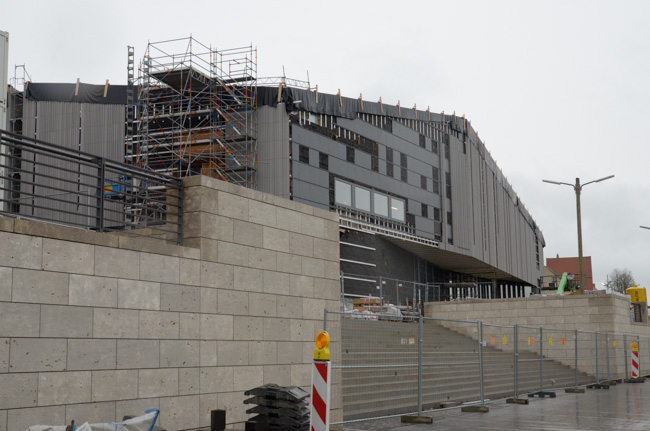 We were expecting the ship to be docked close to town, but they hadn't received permission to move up, and it was a muddy half-mile or so away. There were ship's staff positioned at the expected docking location with umbrellas for those who lacked them and an offer to call a taxi.

We elected to walk. On the way we passed this building under construction. Jim & I were amused by the "clothes pins" holding the roof membrane in place

It must have been far enough outside the historic city center that it didn't have to look medieval or even baroque.