Across Europe in Luxury
Nuremberg

Nuremberg, or Nürnberg is one of the two cities that I had visited when I was a student. At that time I came with my then-roommate Peco after our summer session had ended. We took a city tour and visited the Albrecht Dürer house before saying goodbye. She was off to visit a pen-pal somewhere else in Germany before returning to Japan, and I was off to West Berlin for a solo excursion before joining my classmates in London for the trip home.

On this trip we also said good-bye to some of our Road Scholars at Nuremberg. Our excursion was offered in three flavors: Amsterdam to Budapest, Amsterdam to Nuremberg/Munich, and Munich/Nuremberg to Budapest. It was a sad parting from friends we had gotten to know, but we welcomed four new Road Scholars who joined us here.

Nuremberg had been a well-preserved medieval city before WWII, but the Allies bombed it to smithereens. It was the major industrial center of southern Germany and a prime target. Only Dresden was as destroyed. Although the center city has been rebuilt to look as it did, it is a reproduction. Ironically, considering this destruction, Nuremburg was the site of the post-war military tribunal that sentenced many surviving Nazi leaders to death or imprisonment. More on this later. 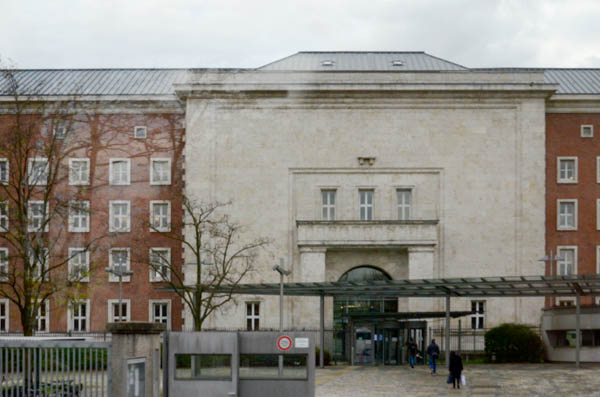 We passed the former SS Barracks on our way to the rally area. The central balcony gave Hitler a place to stand and exhort the faithful.

After the war the barracks were used by the US occupation forces.

Now, in an excess of irony, this is the HQ of the Federal Office for Migration and Refugees. 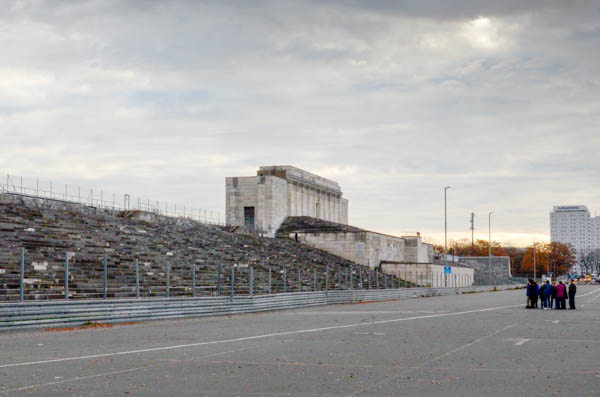 Our destination was the Nazi Party Rally Grounds comprising, among other sites, the Zeppelin Field and the unfinished Congress Hall. We would visit these two. The Wikipedia link above has an overview of all the sites plus pictures of the Zeppelin Field in its heyday.

Zeppelin Field was the only arena large enough that troops and armaments could pass in review. Hitler stood in the still visible tribunal, designed to mimic the Pergamon altar, with its religious and heroic overtones. The actual altar was excavated by Germans in the 19th century and is located in Berlin, far from its Greek origins.

Albert Speer's construction that was to last "a thousand years" is crumbling at a rapid rate and what to do with it is controversial. The victorious Allies demolished most of the superstructure, but what remains is dangerous and fenced off. We were told that the German government has decided to stabilize the remains so that they can stand as a warning against the kind of megalomania that seized the nation when Hitler took power. May it be a warning to us all.

The "grandstands" and part of the parade ground.

The area has been most recently used for rock concerts! 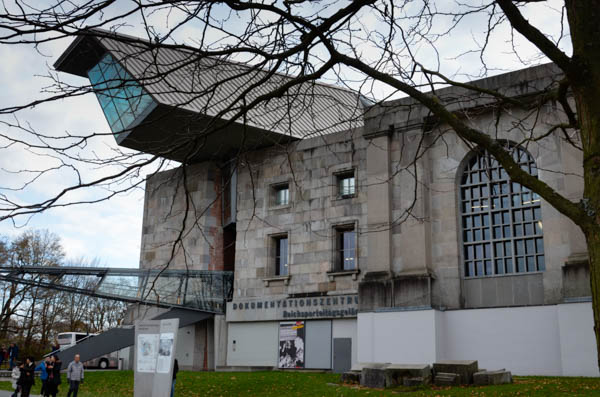 Our next stop was the Documentation Center, a museum dedicated to the rise of Nazi Germany and the Second World War. The museum is located in the unfinished Congress Hall. A design competition in the late 1990s was won by Günther Domenig. The general idea is that it is a stake through the heart of the Nazi edifice. Our guides called it a "spear through Speer," although Speer didn't design the Congress Hall; Ludwig & Franz Ruff did. They don't appear to be noted for anything else other than the SS Barracks shown above.

It was intended to be reminiscent of the Roman coliseum, only half again as large.

There was a nearby shallow lake that was intended to serve as a reflecting pool and further increase the vulgarity of the place. As it happens it only contributed to the swampy ground and necessitated expensive footings that put the entire project over budget. At present the lake is a mud flat. 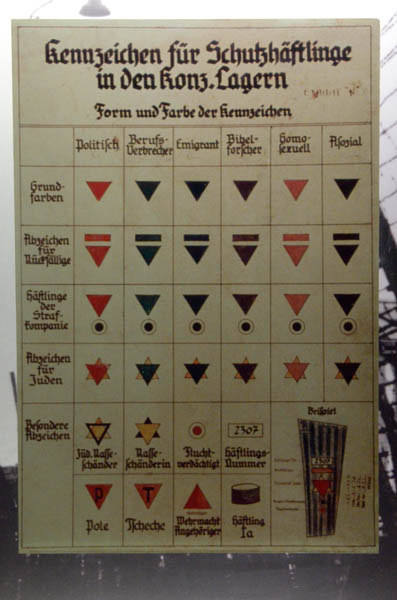 The museum's permanent exhibition occupied several rooms. The exhibits were all in German (typical of the museums we visited), but we were given handsets with English translations of the descriptions. There was no translation however, for posters such as this one describing the various insignia that identified concentration camp prisoners. The columns included categories such as "Jewish," "homosexual," "career criminal," and "Bible interpreter" (that one got me!). The rows were harder to interpret, but they seemed to rank the individual categories in levels of badness as defined by the Nazi administrators. 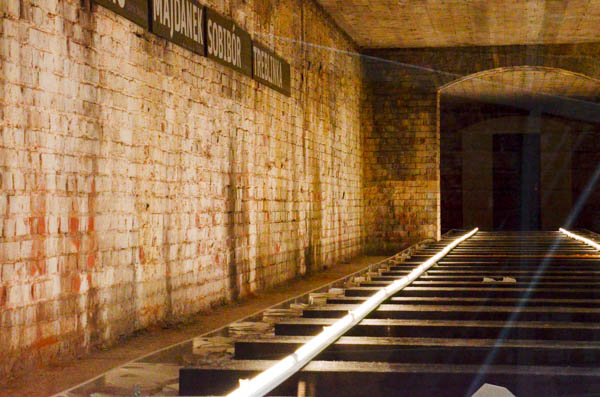 One of the exhibits was a symbolic representation of the railways that hauled prisoners to the extermination camps, Treblinka in this example. 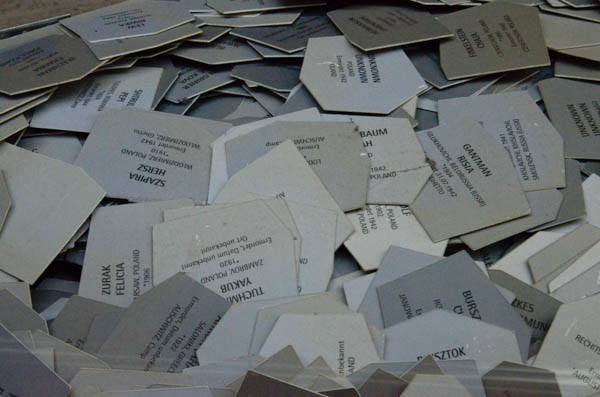 Strewn around the "tracks" in the exhibit above are id cards identifying actual victims by name. There were an additional 100 (or 1,000? or 10,000?) killed for each card present. 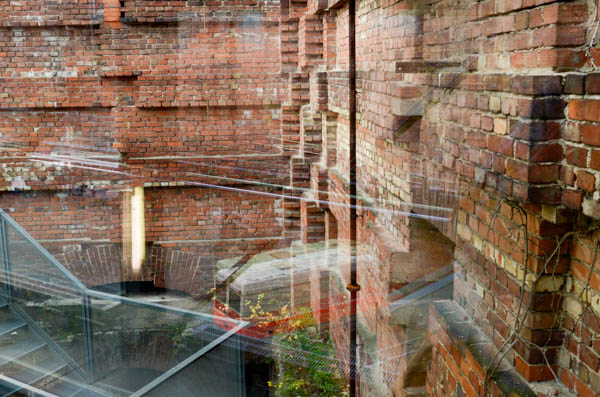 I took this picture as I was leaving. The unfinished walls with distorted reflections in the glass walkway fit the exhibition's theme of "Fascination and terror." It was disorienting and depressing, especially in light of current events in the US. Who could have thought that we would see Nazi sympathizers marching in Charlottesville, VA!

Our next stop was the Palace of Justice where the International Military Tribunal sat in judgment on Nazi war leaders. On the way we passed the rebuilt city wall shown here. The former moat is now a park that circles the inner city.

The decision to hold the trials in Nuremberg had many dimensions. It was a symbolic location as the seat of many of Nazism's early successes, and although over 90% of the city was destroyed, the judicial complex was intact. It was adjacent to the prison that held defendants awaiting trial. The Allies were concerned that they would be assassinated while being transported to and fro.

The defendants and their fates can be found at the link above.

We were unable to visit the courtroom because it was hosting a moot court trial. Since it was not an actual trial, the windows overlooking the area were open and we could peep in. 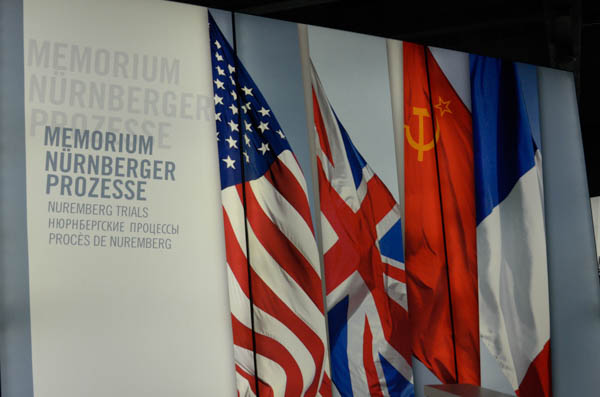 The judges represented four countries: the US, UK, USSR and France. There were four kinds of indictments:

Each judge was responsible for considering a specific indictment and most of the indictments were controversial. Many felt that every nation had been guilty at some point of "crimes against peace" and "waging wars of aggression." "Crimes against humanity" was a new concept. The only charge that was generally accepted at the time was war crimes, which began to be codified in the mid-19th century.

On our way down from the museum we saw a display showing the differences between the courtroom configuration then (L) and now.

A ground-breaking feature of the trial was admitting motion pictures as evidence. The large recessed screen in the back of the courtroom displayed the condition of the concentration camps for the "crimes against humanity" charges. 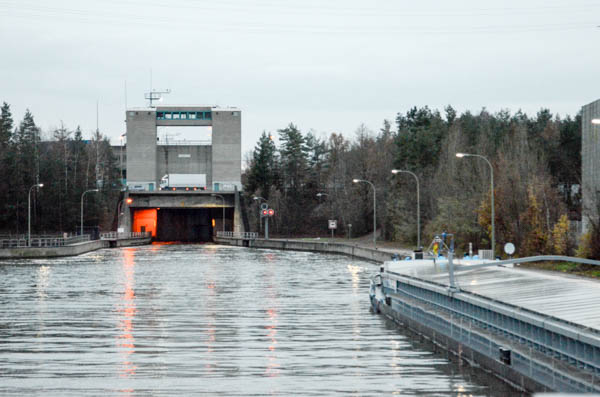 Nuremberg was our last stop on the Rhein-Main-Danube Canal. Tonight we would cross the European continental divide and descend to the Danube. As we left Nuremberg, Dr. Markus Urban presented a lecture on the canal and its predecessors. Dr. Urban has written a book in collaboration with Daniel Gürtler, whom we had met earlier in the trip when he gave us a lecture on Bavaria.

Attempts to build a canal across Europe date back at least to Charlemagne's unsuccessful attempt in the 8th century. In the 19th century the "Ludwig Canal" was completed from Bamberg to Nuremberg. It was a day late and a dollar short, but it did stay in operation until the start of WWII. The dignitaries who attended the grand opening in 1846 returned home on the newly constructed railway!

There were still canal believers, but they focused their efforts on taming the rivers first by building dams, locks and power plants on the Main (34) and the Danube (6). It was the sale of power from these power plants that financed the canal. We are about to enter the first massive lock of the new (1992) canal.

The canal segment we are now entering has clever mechanisms that conserve the water use. There is more about it at the above link. 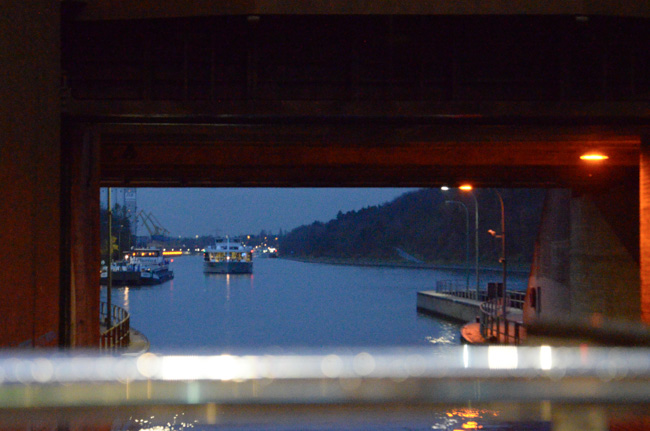 I have run to the back of the ship to capture the lock door closing.

To return to the lecture, the new canal was controversial because of environmental issues. In response a significant portion of the eventual expense was dedicated to remedial work, especially on the portion that followed the scenic Altmühl River.

The promoters envisioned the canal for freight -- passenger traffic wasn't on the planners' radar. Today 21% of the ships are tourist ships like ours. This has required numerous infrastructure modifications.

It is difficult to say whether the canal can be considered a success or not. Its operation is heavily subsidized, but the increase in tourism has been a boon to the cities along its length. Certainly we would not be here if it weren't for the canal.