Across Europe in Luxury
Bamberg

After our visit to the Schloss, we piled back into the bus for the drive to Bamberg, a UNESCO World Heritage Site. We arrived late in the day, so picture-taking was compromised. It was a lovely town and worth a longer visit. 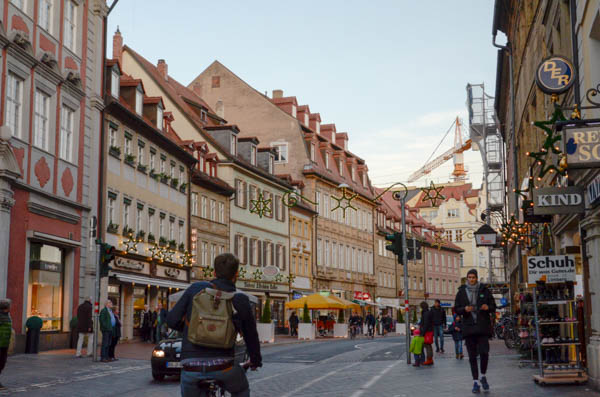 We had some of our nicest weather here and the locals were out in force enjoying the Christmas decorations and the recently opened Christmas market.

The egomaniacal Prince-Bishop, whose Schloss we had just visited, was the Bishop of Bamberg and exercised excessive influence over the town. He decreed that the medieval facades of the buildings were "old fashioned" and encouraged (coerced?) the business owners in the city center to "upgrade" their properties with modern baroque facades. These buildings are older than they appear. 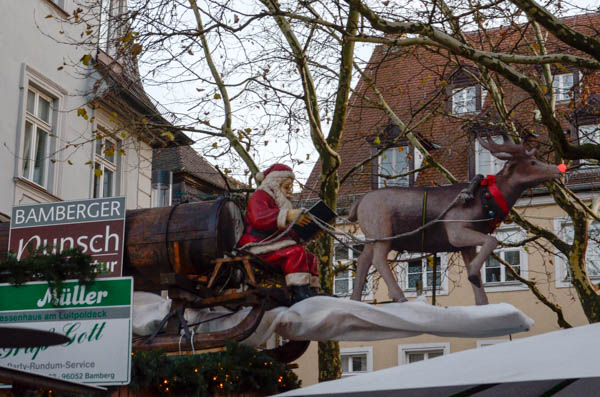 The Christmas market was already open, to the delight of our shoppers. I couldn't resist Santa and Rudolph with his glowing nose. It's not just the US that has commercialized Christmas out of all recognition. 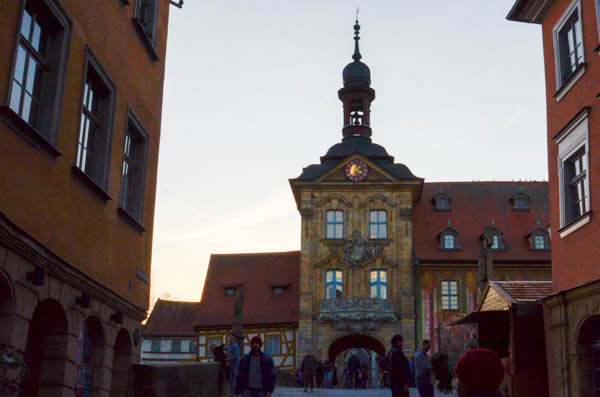 The old town hall is on an artificial island in the middle of the Regnitz River. The Prince-Bishop (not our egomanic, an earlier one) didn't want to grant the citizens land to construct the building so they built it in the river. The frescos are amazing. I couldn't get any decent pictures, but check the link for details.

The major damage that Bamberg received during WWII was the destruction of the bridges to the town hall. They were destroyed by the retreating German army. 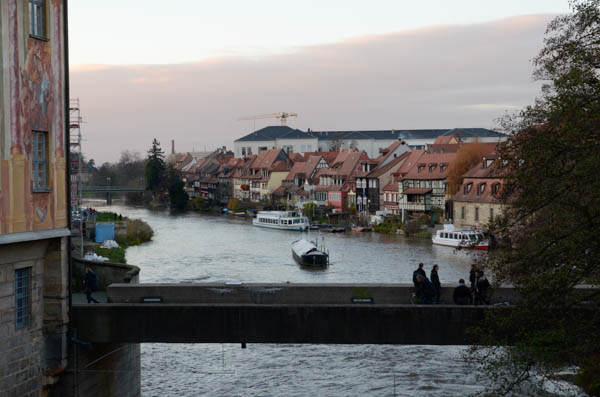 The cluster of ancient houses built along the river is called "Little Venice." We didn't have the opportunity to visit, but it was quite picturesque from a distance.

Looking upstream along the river from the Rathaus bridge. 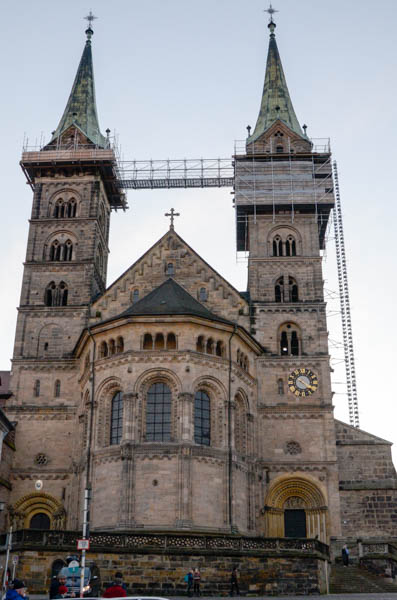 The cathedral was first begun in the 11th century, but it burned (twice) and the current Romanesque structure was completed in the 13th century. Later additions to the towers are Gothic. Extensive restoration has been ongoing since 2006.

The interior was baroque-i-sized in the 17th century, but a 19th century restoration removed the ornamentation and returned it to its original style.

The cathedral houses this enigmatic horseman. This is a lousy picture, but I had to take it, of course. There is a much better picture at the link. I hope the source at that link stays around (they occasionally disappear) not only because of the quality of the picture, but because it echoes what we were told -- especially the wrong-headed adoption by the Nazis of the figure as the emblem of racial purity. In fact the most likely candidate for the horseman is St. Stephen of Hungary.

One blooper in the discussion at the link is that the author states the horse as standing "at attention." The horse is anything but. The cocked foot is a classic horse-at-rest gesture.

The oddest thing about the statue is its location: just to the left of the altar. 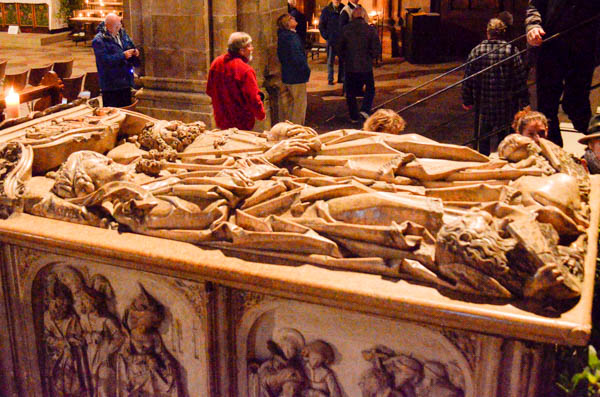 Holy Roman Emperor Henry II founded the bishopric of Bamberg. He also started the cathedral. He gave the town of Bamberg to his wife Kunigunde as a wedding present.

Henry and Kunigunde were childless, giving rise to the belief that the marriage was platonic and never consummated. They were both later canonized.

The guide explained that in most such burial monuments the man would be on the right and the woman on the left, but that is reversed in this sculpture, perhaps because she was venerated more than he. The carving was done in the 15th century long after their deaths in the 11th century. 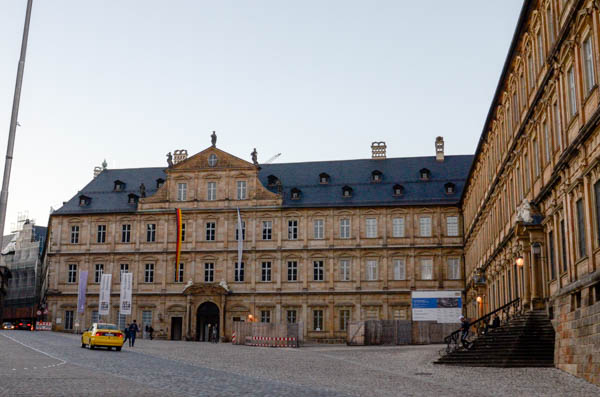 Across the street from the cathedral is the "new" Residence Palace of the egomaniacal Prince-Bishop. We didn't go inside and we weren't told if it had pictures of him in every room. 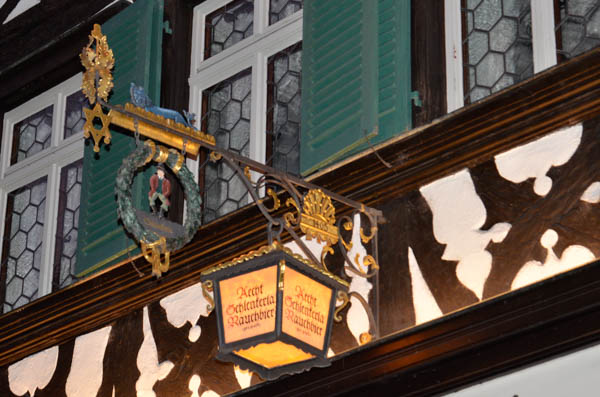 As we walked down the cathedral hill, we passed the Original Schlenkerla Smokedbeer brewery. It has been brewing beer since at least 1405. Smoked beer is a Bamberg specialty. Our guide described it as like drinking liquid bacon. Sounds like an acquired taste to me, but several of the Road Scholars made a beeline back for the free time we had in Bamberg. 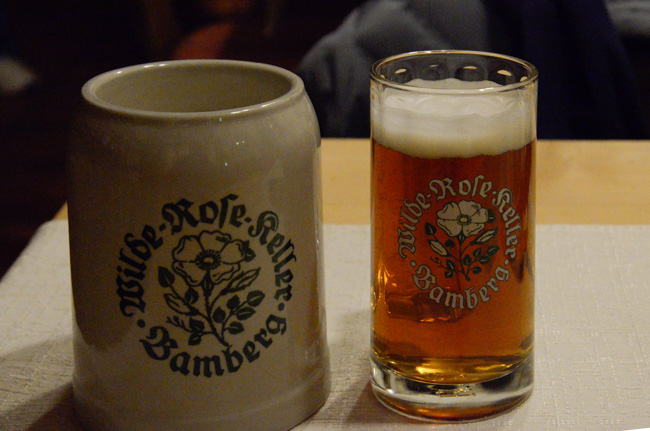 Jim and I, on the other hand, made a beeline for the nearest recommended pub (and WC) after the end of our tour. We had boring old "dunkles" lager at the Wild Rose.

I haven't found any kind of online corroboration of this, but our guide told us that "rose" was a medieval slang term for prostitute. Back in the day Bamberg had a thriving, er, industry along those lines and was called the "city of roses." We wondered if the "Wild Rose" had been a brothel at one time.

Whatever. The beer was good. And nowadays Bamberg is noted for the rose garden at the New Residence. 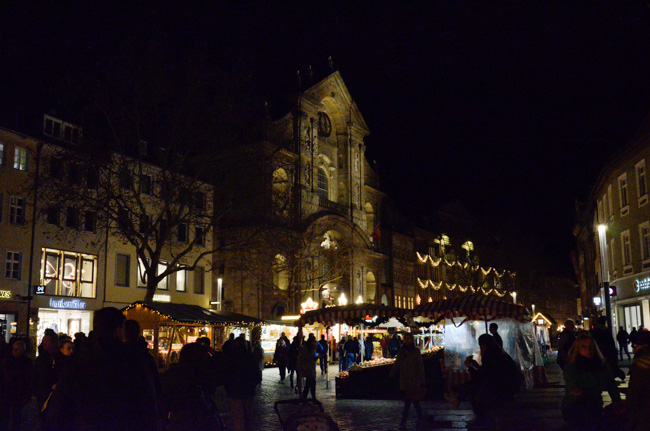 As we left the Wild Rose to rejoin our group, we passed the market in full swing. This is not the Christmas market, which was around the corner, but the weekly Farmers' Market. It has its origins in the 11th century.

After piling into our buses, we caught up with the ship, which had been wending its way through locks while we toured. The chef had finagled some turkey to provide Thanksgiving dinner for us Americans. It wasn't exactly a traditional preparation, but it was delicious and indicative of the care the ship's staff took of us.

It was at Bamberg that we left the Main and entered the Rhein-Main-Danube canal.