Across Europe in Luxury
Schloß Weißenstein

While we were on this trip, Jim asked me if there is a rule to determine whether the ß (eszett) is used to write an "ss" or not. I couldn't remember, but according to Wikipedia there is one. There is more information at the link that you ever cared about. 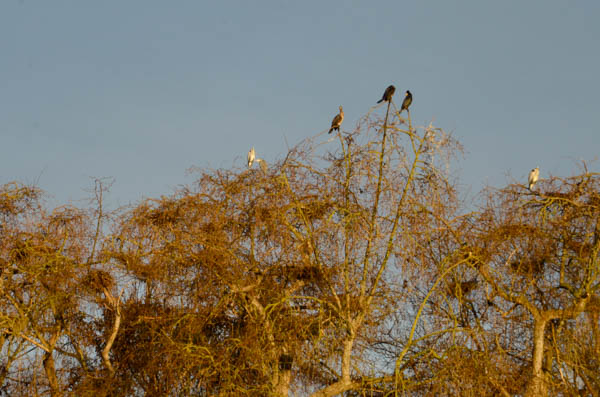 The morning was free, without even a lecture! I spent most of it gazing out the window or hanging out on the prow of the boat.

Even had the weather been balmy, the upper deck of the ship was closed during most of our trip on the Main and later on the Rhein-Main-Danube Canal due to low bridges. All of the upper structures, bar, chairs, awning, railings, stowed away to give clearance.

The light-colored birds are grey herons. They are similar to our great blue herons except that their necks retract. I would not have recognized them as herons except that one chose to fly into another tree and spent a minute or two standing tall.

The darker birds are cormorants. 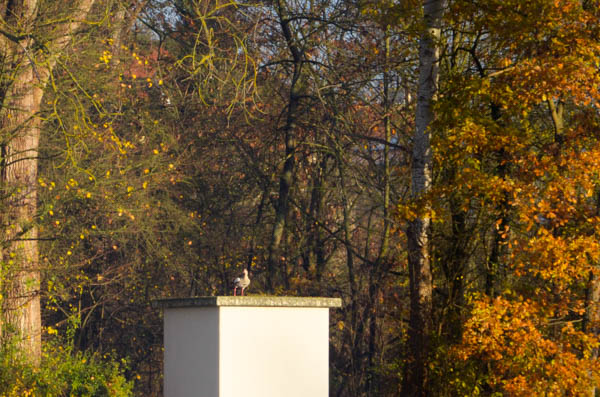 At first I thought this bird was a duck, but it is an Egyptian Goose. We had seen them all along the trip, but they are very shy and flew away before I could get a picture. This is the best I was able to do. It is native to sub-Saharan Africa, but has become established in Europe and the UK and is even found in the southern US.

For a goodly portion of the river this morning, there were side ponds along the bank. Their water level was higher than the river, in some cases much higher, and there were occasional small cascades such as this one where they disgorged into the main waterway. The river was flanked by significant bluffs and we wondered if the "ponds" were fed by natural springs or artificial drainage channels from the bluffs. We never saw any inlets so the question remained unanswered. I suppose we could have asked someone, but a few mysteries here and there are appealing. 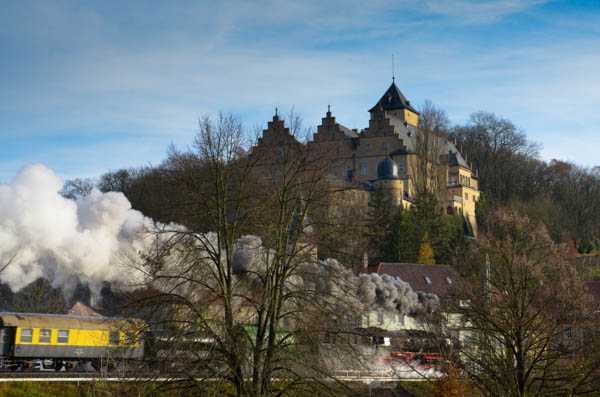 This may be my favorite picture of the trip and it was complete serendipity. I had gone outside to get a picture of the chateau when, much to my surprise, the steam train came whizzing past. My finger reflexively clicked the shutter.

One of the Road Scholars later fussed that the steam and coal smoke spoiled the view. In my book the smoke WAS the view! 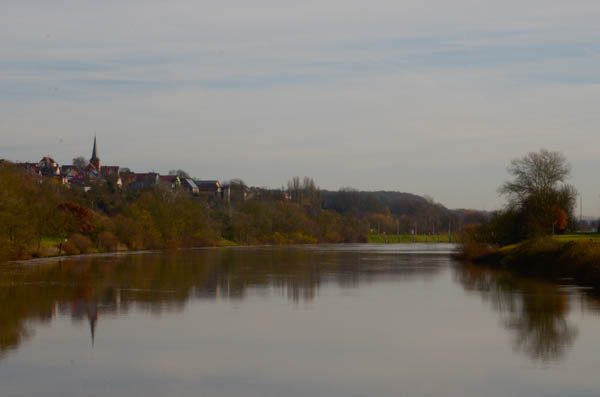 Once we left the Netherlands, we didn't see many wind turbines, but solar energy was very common. Almost every roof in this little village is covered with solar panels.

I have to insert a rant here because a lot of early development of solar cells was done in the US, but we didn't support our local industry because fossil fuels were too cheap. As a result those businesses failed and now we buy our solar panels from Germany and China. (Close to 100% of our own home electricity usage is met by the panels we installed last year.)

Our government is still looking backwards to the industry of yesterday rather than forward into how we can succeed in the future. For example, the new tax proposal slashes R&D tax relief. Grrr. 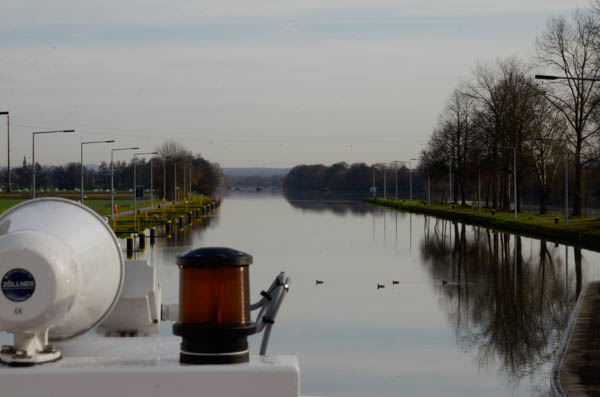 We continue to pass locks. This one has lots of mooring for vessels waiting to go downriver.

When we reached our drop-off point in Zeil am Main, our buses were waiting to take us on our excursion to the Schloss Weissenstein. On the way we passed through a variety of quaint towns. 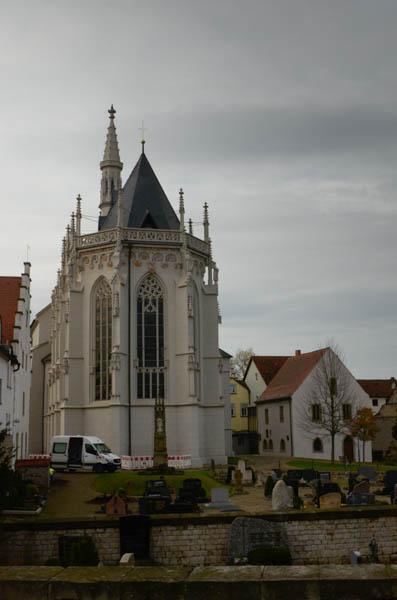 Our guide told a story about this Gothic chapel in the town of Hassfurt. I snapped a picture of the chapel and promptly forgot the story. Resurrecting the details is a testament to the power of the WWW.

I couldn't find it in Zeil am Main. Google maps showed me nearby towns, and I recognized one of them: Hassfurt. We know someone here in Lexington whose name is Hassfurter, and I had wondered at the time if his family might have originated there. Sure enough, a search for "Gothic church in Hassfurt" turned up the Ritterkapelle or Knights' Chapel. Most of the resources for it are in German, but the following is from Beneath the Cherry Sapling: Legends from Franconia, edited by Norbert Krapf, as reported by Google Books:

The night before St. George's Day about midnight a large procession of knights arises out of the Knights' Chapel in Hassfurt. They ... are the ghosts of all the Franconian knights whose coats-of-arms we see carved in stone in the Knights' Chapel. They proceed ... through the neighboring oak forests to a valley of the Steigerwald. There they hold a great tournament.... Not until cockcrow does the procession turn back again, carrying in its midst the orphaned crown of the Holy Roman Empire. 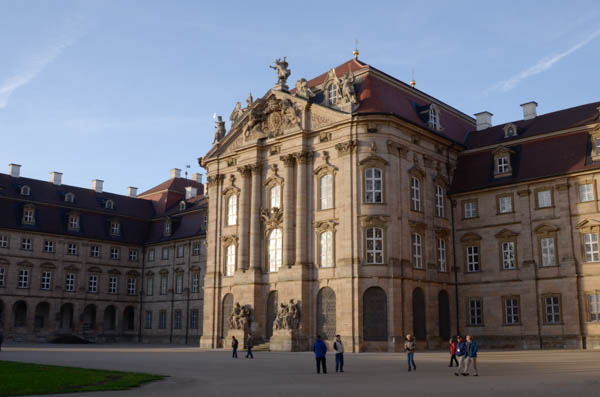 Our destination for the morning was the Schloss Weissenstein, built in the early 18th century by Lothar Franz von Schönborn, Prince-Bishop of Bamberg and Prince-Elector of Mainz. Throughout his early life he wanted a palace in the country, but lacked the funds to build it. According to the above website: "A donation from Emperor Karl VI helped finance the project." A more apt description is that Karl bribed the Elector to ensure his support.

In any event, the dream came true and the Schloss was built. "Weissenstein" means "white stone" and it well describes the material used for the castle. As can be seen at the link, the family still owns and operates the facility and its dependencies.

We were not allowed to take pictures inside. 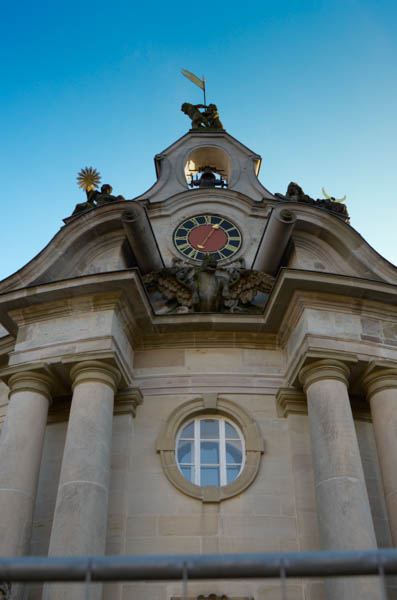 The Prince-Bishop was an egomaniac. All of the public rooms of the Schloss had either a portrait or a sculpture of him. The grand staircase was designed so that he could stand at the top to welcome guests. Most guests were required to bow or curtsey every few steps as they ascended the stair to his eminence. It was an honored guest indeed who was allowed to walk up the stair uninterrupted. One room, the hall of mirrors, was configured so that he could stand in his accustomed place and be infinitely reflected. (I'm not making this up; this is what they said!)

What is a Prince-Bishop, anyway? The discussion at the link is exhaustive/exhausting. To summarize: in central Europe church and civil offices got mixed together in certain jurisdictions. This was particularly true in the areas that were part of the Holy Roman Empire.

And Prince-Elector? The discussion at the link will make your head swim, but in theory the Holy Roman Emperor was elected by the members of an Electoral College and then crowned by the Pope. There were originally seven electors, one of whom was the Archbishop of Mainz. Lothar-Franz was Archbishop of Mainz, thus one of the electors.

This pediment was above the Archbishop's stables, which were in front of the Schloss itself. Nice barn. 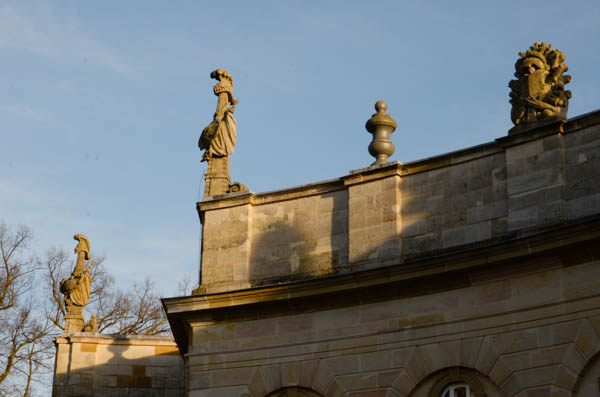 Another detail over the stables. The armor and helmet on top of an obelisk was a theme we saw elsewhere.

The stables had been turned into a hotel, but it is currently closed.