Across Europe in Luxury
Würzburg

We wouldn't arrive in Würzburg until the afternoon, so Balázs scheduled a lecture on the European Union. Because the subject was so topical given the 2016 Brexit referendum and its aftermath, which continues as I revise this in 2020, he arranged for others on the ship to attend. An unexpected benefit was that we could meet in the upstairs lounge with much more comfortable seating than the corner of the dining room we had been using!

I cannot summarize what was already a very condensed summary. Looking at the regional tensions in our own country, which is relatively new and much more homogenous than the mature and diverse cultures in Europe, it is amazing that things have gone so well for the EU. Considering that there are thousands of years of division and conflict between the European nations, that there is no common language, and that the EU as a concept has really only been around since WWII, the current growing pains are inevitable. It is an audacious experiment.

There have been numerous attempts to unify Europe over the centuries, starting with the Roman Empire. All have relied on military force and all have failed. This is the first time that the nations have come together diplomatically with the hope to avoid further devastating war. I wish them all success! 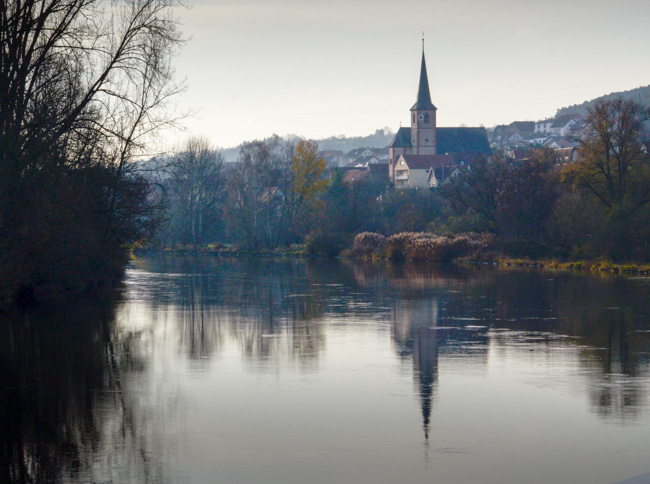 When we weren't getting educated, we enjoyed views of the towns along the river. Having grown up on the Mighty Mississippi, I am amazed at the size of the ships and the amount of commercial traffic these smaller rivers can support. 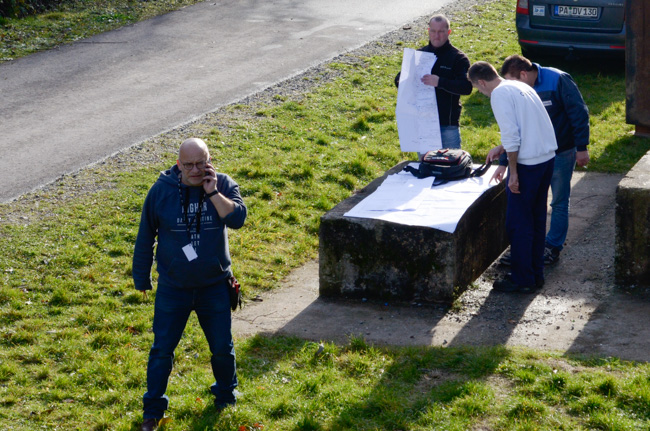 When we arrived at our disembarkation mooring, we found a cadre of engineers with mechanical and electrical plans for the ship. The Crystal Mahler had only been in service for a couple of months so we guessed that they were still getting some bugs out. Jim had noticed a strobe light outside our window for the past couple of nights and was convinced it indicated a problem of some sort. I pooh-poohed that idea, but after this service stop it went away. I guess he was right. Again! 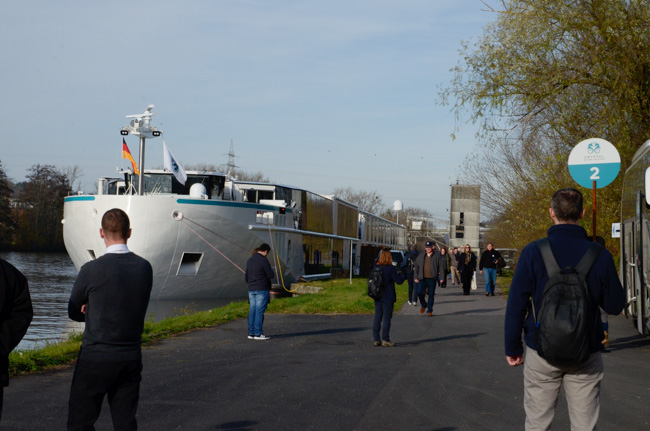 The boat tied up in the middle of nowhere, but our buses were patiently waiting in a nearby parking lot. The circular paddles used by the local guides had numbers corresponding to the settings of our "listening devices" so we knew who to follow and how to hear their commentary. Our Road Scholars usually had two guides, so we were never more than 10 or 11 in a group. We also had our own bus and I don't think it was as crowded as the other buses.

The listening devices were super high-tech and had to be set using a special colored card. When properly set they all glowed with the same color, for example, #2 might be green whereas #5 might be pink. It was all very slick and full of bugs. Setting a channel switch works fine for me.

One of the many benefits of traveling with Crystal Cruises was that we had our own buses that traveled along with us. We didn't have to learn a new bus team at each stop. The distinctive designs made them easy to pick out in a crowded street.

We saw nothing of Wurzburg itself, which was destroyed at the close of WWII. I captured this shot of the old Main bridge dating from the 16th century from the bus. 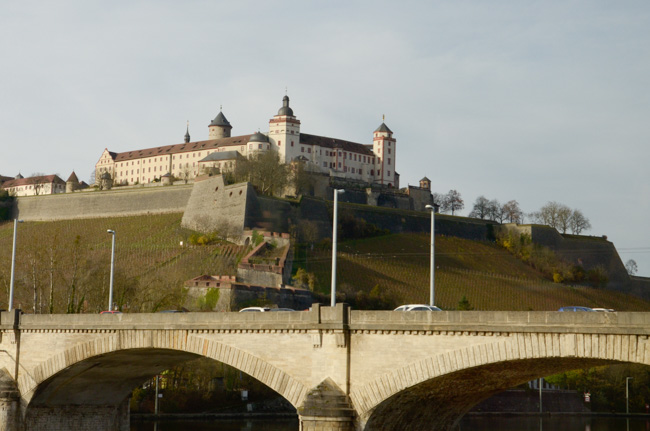 The Marienburg Fortress was not on our schedule although a hike to it was one of the optional tours offered by the ship. I had not yet discovered the more vigorous activities available from the ship's offerings or I might have opted for it instead of the official Road Scholar segment.

Our goal was the Residence Palace. In spite of damage during the March, 1945, bombing raid, it escaped destruction and has been restored to a standard that made it eligible for UNESCO World Heritage status. This was a real-life success of the Monuments Men who saved as much of the art and architecture of Europe after the war as possible. The priceless Tiepolo frescos were not themselves damaged by the bombing, but the damage to the roof would have exposed them to the elements and inevitable deterioration. Quick action in building a temporary shelter saved them.

We were not allowed to take pictures, but the frescos and other information about the Residence can be seen at Wikipedia (you must scroll to the bottom for the frescos). The seamless integration of the three-dimensional figures and the two-dimensional frescos was fascinating. 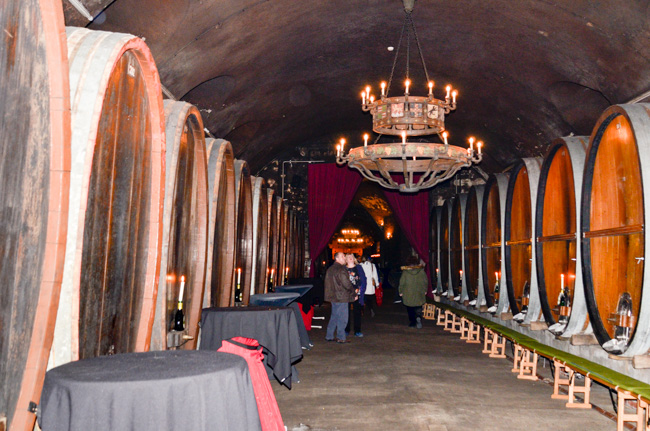 Once we toured the palace, we got to the interesting part of the day: a wine tasting in the Residence's cellars. The Prince-Bishop's wine estate dates to the 12th century. Napoleon (again) secularized the estate and in 1804 transferred the vineyards to the Bavarian crown. When the Bavarian monarchy lapsed in 1918, the Bavarian state nabbed them. It remains one of the largest wine estates in Germany.

The cellars are much more extensive than what we saw, but what we saw was impressive. 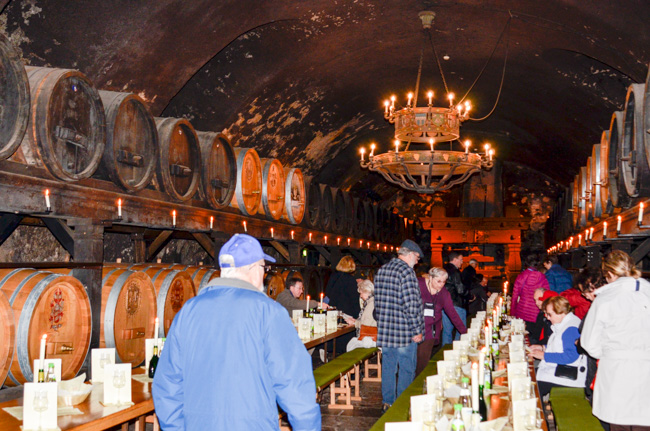 We tasted three different wines: Müller-Thurgau, Silvaner & a Scheurebe Kabinett. We enjoyed the first two, dry whites, but didn't care for the last one, which was too sweet for us. 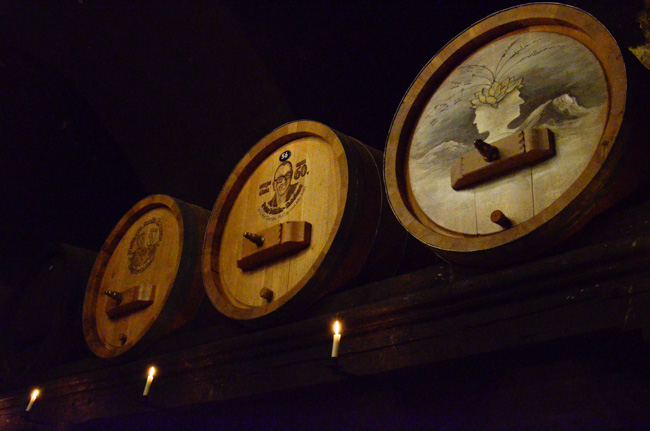 Individuals, families or organizations can "lay down" a barrel in the cellar. That would be pretty cool. 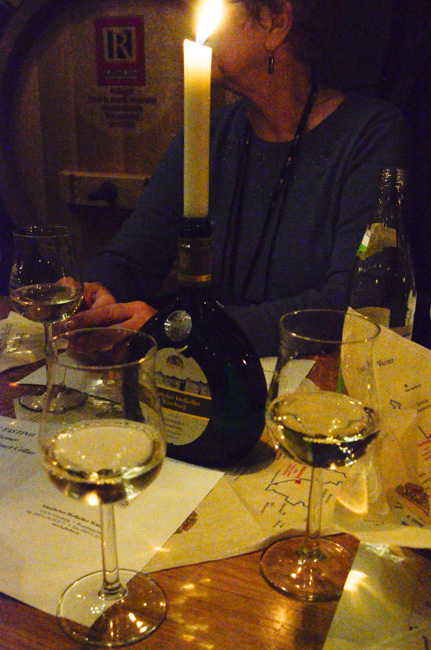 The wine bottles have a distinctive shape and designation: Bocksbeutel. The shape is protected and can only be used for certain wines. The EU has defined the bottle as: "short-necked glass bottle, pot-bellied but flattened in shape, with the base and the cross-section of the bottle at the point of greatest convexity ellipsoidal in shape. The ratio between the long and short axes of the ellipsoidal cross-section is approximately 2:1, and the ratio of the height of the convex body to the cylindrical neck of the bottle is approximately 2.5:1."

One of the negative points highlighted in the EU presentation in the morning was excessive bureaucracy. The example given in the lecture has the nickname bendy banana law, but regulations such as the above are intended to protect consumers from unauthorized knock-offs. Nevertheless they are easy to parody.

After the tasting we returned to the ship for a lecture on Bavaria. It has had a checkered history, but at present is an economic leader in Germany with a high standard of living and low unemployment.