Across Europe in Luxury
Miltenberg

We weren't scheduled to arrive at our first stop of the day until the afternoon so Balázs gave a morning lecture on European Architecture. We saw all of these styles during our travels, and he illustrated his talk with places we would visit. An overview of what he covered with examples that either are or could have been in this journal:

The lecture prepared us for much of what we saw. In recent centuries styles changed much more dramatically. 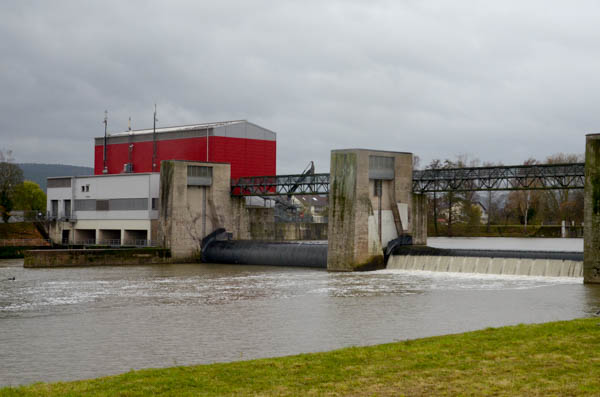 That morning I had a chance to get pictures of a lock transit.

Virtually all of the locks we passed had associated hydro plants. The hydro power sales helped to finance the canal construction.

The dam can be raised or lowered as conditions indicate. There is significant spill over the dam here in addition to the flow through the power plant. 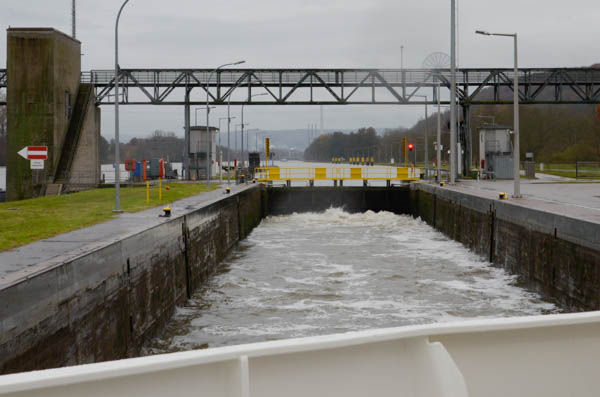 Water surges in to raise us to the higher level. 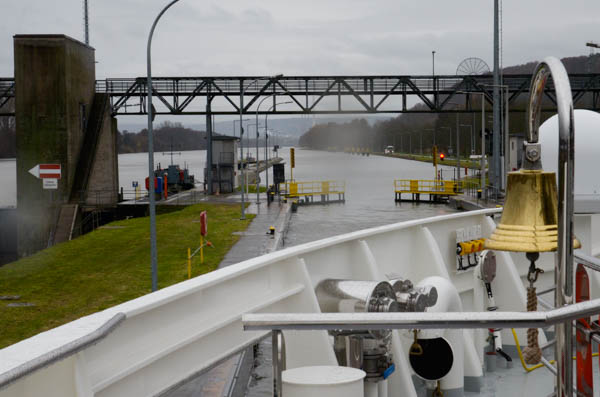 We are now at the higher level and the lock gates are opening. Note that the red light is still on. The ship must wait until it turns green to proceed. 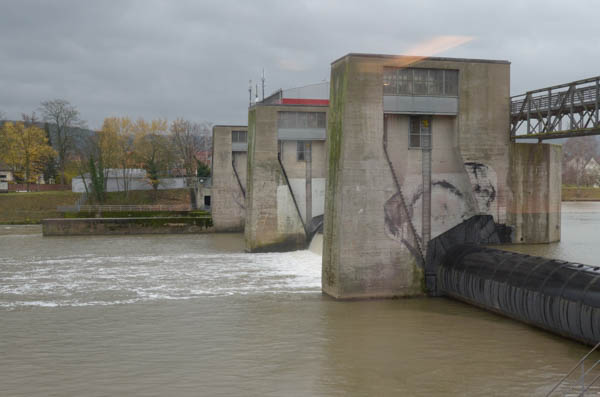 Moving through the lock. The mechanism to raise and lower the dam can be seen on the piers. 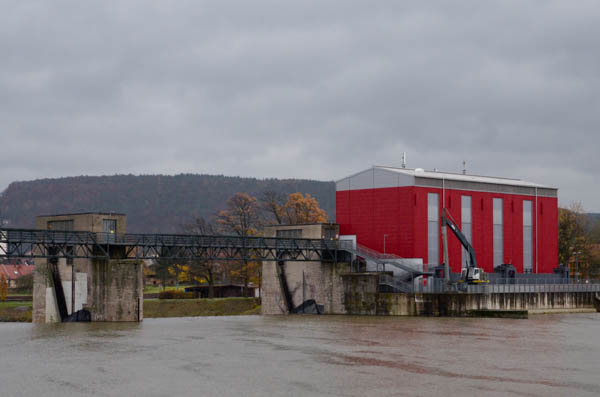 The dam and power plant as seen from above.

As noted earlier, we had to pass MANY locks on our journey. Usually we didn't have to wait, but once we were delayed about three hours. The tour staff admonished us not to miss our scheduled departure times after shore excursions because the ship had "appointments" to keep at the locks. If we were late, we'd lose our place in line with repercussions all down the road, er, river.

I had the impression that the ship would leave a belated traveler without a qualm. Balázs emphasized at the beginning of the trip that "on time" meant 15 minutes early. 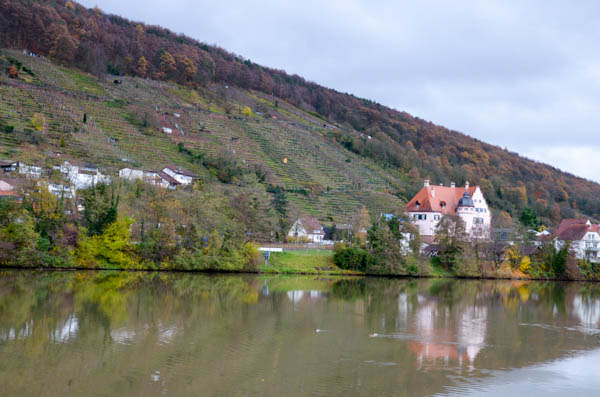 The area is well-known for its red wine. What! Red wines in Germany? Indeed! We had lots of good pinot noir wines from the region. 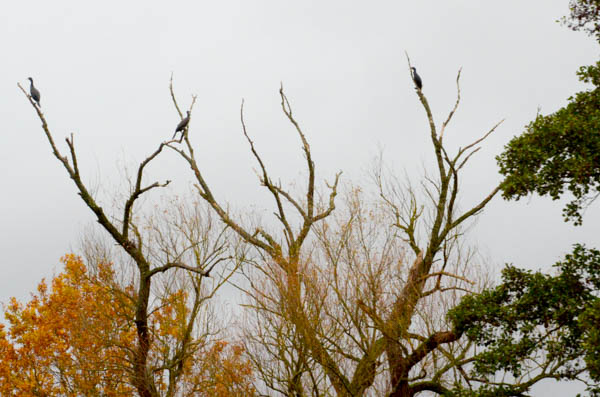 Cormorants such as these were struggling in Europe just a few decades ago, but are now making a comeback. 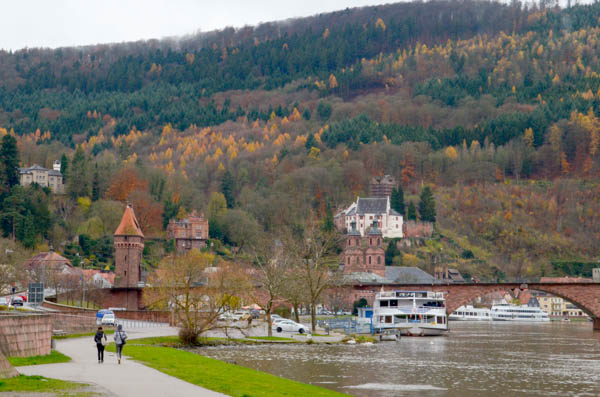 We have arrived at Miltenberg. The handsome bridge, which looks medieval, is quite new. It was first constructed in 1900 and rebuilt in 1950 after being destroyed in WWII -- by the German army.

The building in the center of the picture on a low ridge is the castle.

The riverside promenade was completed only a year or so ago. The low wall to the left is a flood wall with a high-tech extension that can be raised to the desired height as needed. Floods are a constant threat.

Our ship dropped us off here and left to make its way to our pickup point in Wertheim. 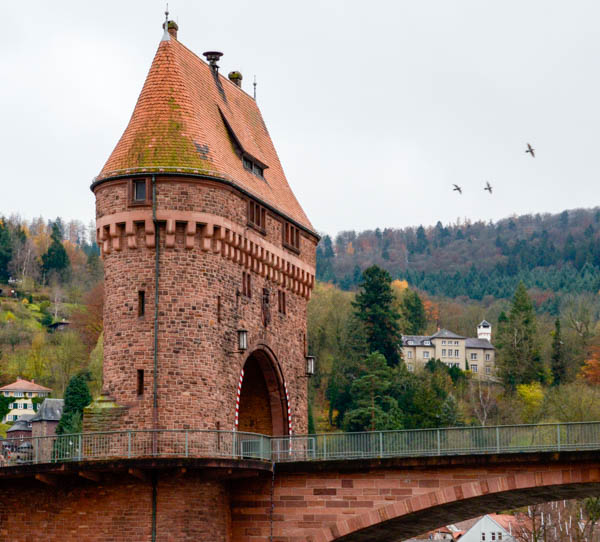 A close-up of the faux-medieval bridge head.

The red sandstone is a Miltenberg specialty and has been sought-after since at least the Middle Ages. 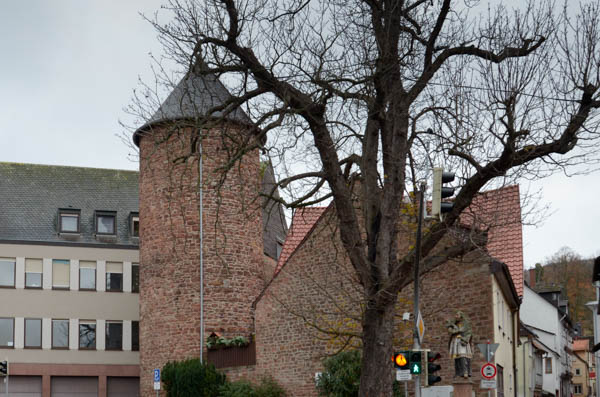 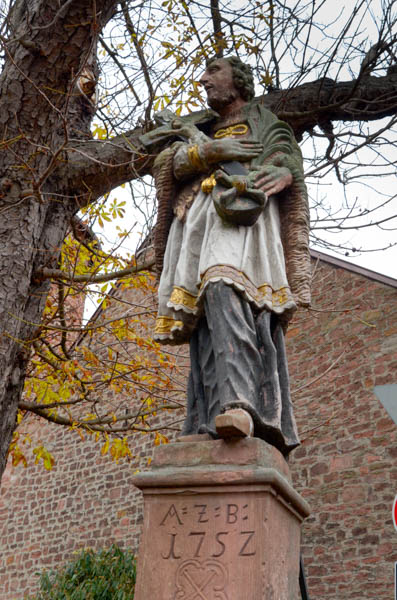 This was our first introduction to St. John of Nepomuk. He drowned when the King of Bohemia threw him into the Vltava (Moldau) River at Prague and is thereby considered a protector against floods and drowning. Statues of him are found on or near bridges.

Since all of our trip was along rivers, and since those rivers are subject to flooding, we met up with him frequently.

Tradition holds that he was killed for refusing to violate the confessional (the king was suspicious of his wife's fidelity), but the contemporary accounts state that the reason for his death was his supporting the Archbishop rather than the King in the choice of an abbot for a rich local abbey. 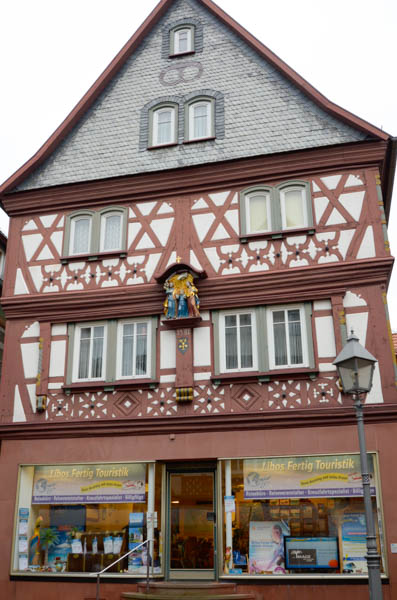 This building is dated 1581. The "X" shape design of the half-timbering on the upper story represents the cross of St. Andrew who, according to tradition, was crucified on an X-shaped cross or saltire. The diamond shapes on the lower story indicated the wealth of the builder.

The three figures between the two stories also had some kind of tradition associated with them, but I forget what it was.

The feature, however, that attracted us is the ground floor, which is constructed of sandstone. Since the town is subject to frequent flooding, the wooden lower stories of the buildings sustained damage. Failure would cause the building to collapse damaging both it and neighboring structures not to mention endangering life. The town leaders dictated that lower stories all be made of the local sandstone, which had the additional property that it dried quickly after a flood. Buildings that predated the rule were retrofitted. 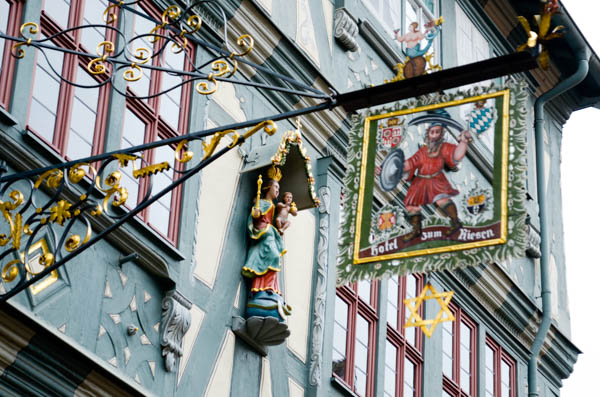 This hotel claims to be the oldest hotel in Germany.

An inscription states (more-or-less) that it was built by the hand of Jacob Storz in 1590 and that it welcomes princes, townsmen and farmers alike.

The six-pointed brewer's star beneath the sign identifies the tavern as having beer on tap. 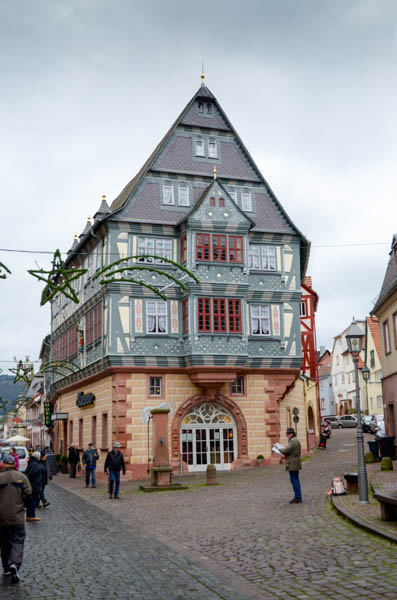 The hotel as seen from the main square. Note the sandstone ground floor. 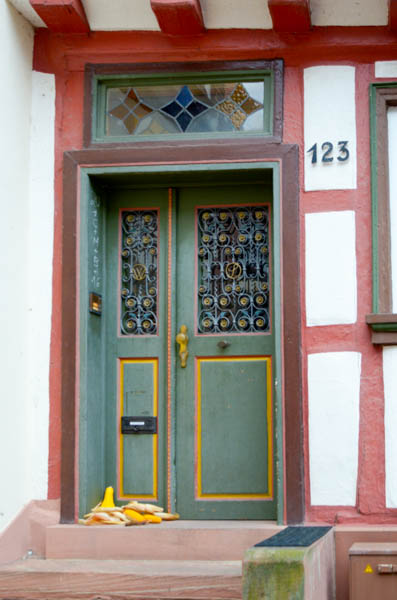 This is a lovely door, but that's not the reason I've included it. The symbols "20*C+M+B+16" appear on the left-most door jamb. We saw marks like this many times during our trip. By tradition children visit houses on Epiphany seeking gifts. They then mark the door with the year, 2016 in this instance, and the letters C, M & B. The guides explained that letters stood for the traditional names of the three Magi: Caspar, Melchior & Balthazar. They may also stand for Christus Mansionem Benedicat or "May Christ bless this house." 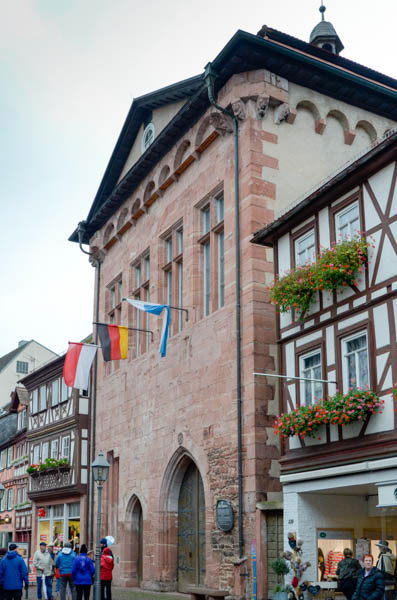 On the lower right corner of the building is a flood gauge. 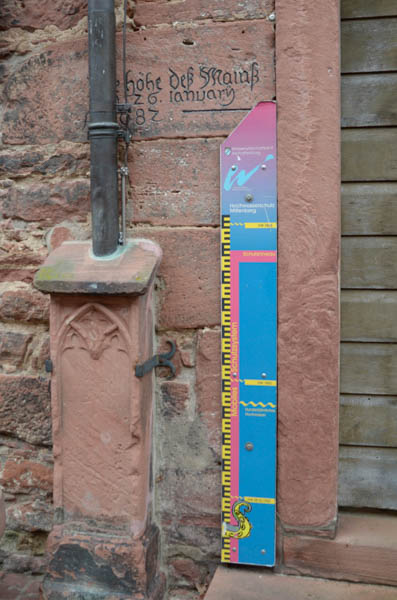 The old inscription gives the flood height in 1682. 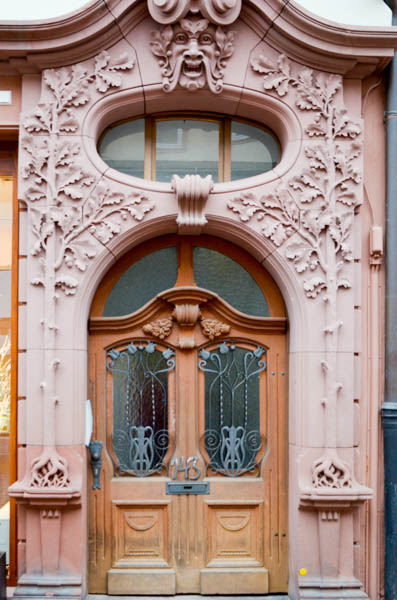 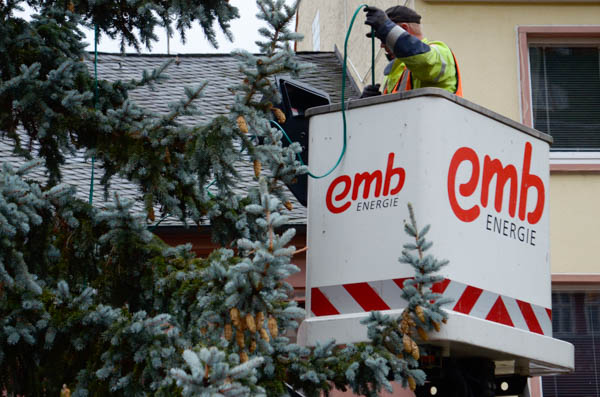 The town was still getting "dressed" for Christmas. I expect a Christmas market will materialize shortly. 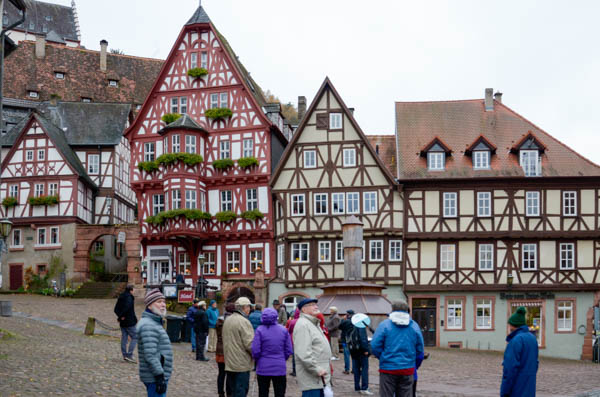 The Market Square and fountain date from the 16th century and earlier.

We were allowed about 45 minutes free time to shop or explore. I opted to walk up to the castle. 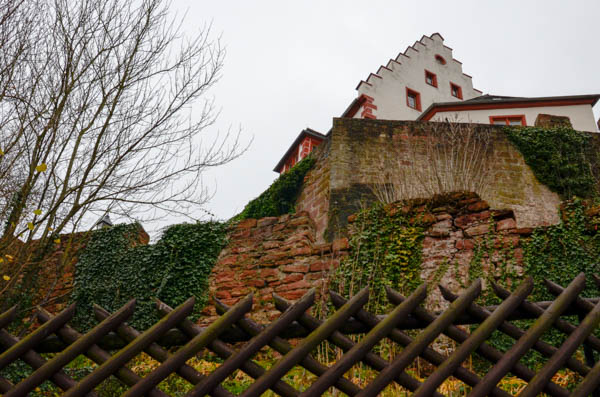 I enjoyed the brisk hike up the hill. The castle wasn't open, but the view was great and the exercise felt wonderful. The road was steep and the cobbles were rough.

The castle dates from the 12th century and attained its current form in the 16th. 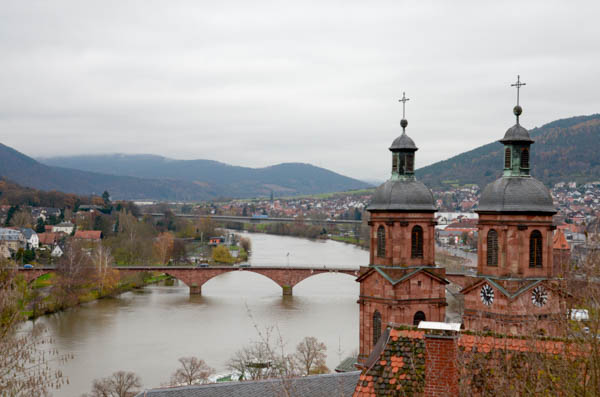 The towers belong to the St. James (Jakobus) parish church on the Market Square. The first church in this location dates from the 13th century, but it reached its current configuration in the 19th. 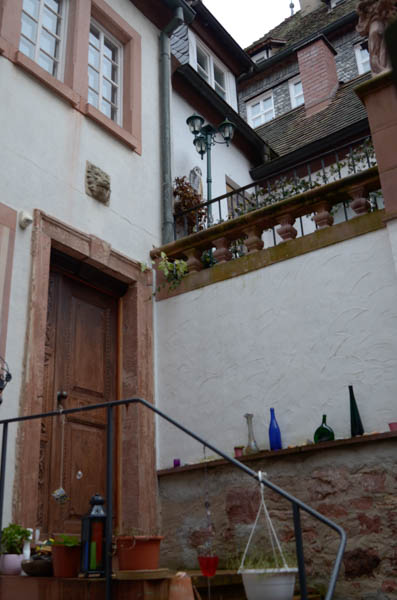 These houses indicate just how steep the hill is going up to the castle.

As I walked down the steep street I noticed that one of the half-timbered houses had incised Roman numerals in the timbers. I asked our guide and he said that when the town was expanded long ago, the government supplied a certain amount of framing wood for free. The wood was delivered to the Market Square and builders hewed and assembled the structural frames there. Once they completed that work, they numbered the beams so that the frame could be reassembled in its ultimate location.

After our Miltenberg tour we loaded onto buses to Amorbach. Our three Crystal Cruises buses traveled along with the ship from Amsterdam to Budapest! They were much more spacious and comfortable than the standard tourist bus and having the logo prominently featured made them easy to find when returning from free time in town.