Across Europe in Luxury
Koblenz

Our morning started with a guided walking tour of Koblenz. This was the first of many excursions where our ship dropped us off and then continued to a prearranged meeting place. After the tours our buses would take 45 minutes to drive the distance it took the ship 3-4 hours to cruise. Jim was feeling a bit under the weather so he stayed on the ship and enjoyed the cruise.

It was a cold and rainy morning and our guide set a brisk pace to the consternation of some of our Road Scholars. It is difficult to accommodate varying levels of fitness although the Road Scholar organization does its best. When asked, the guide said she would slow down, but she never did. 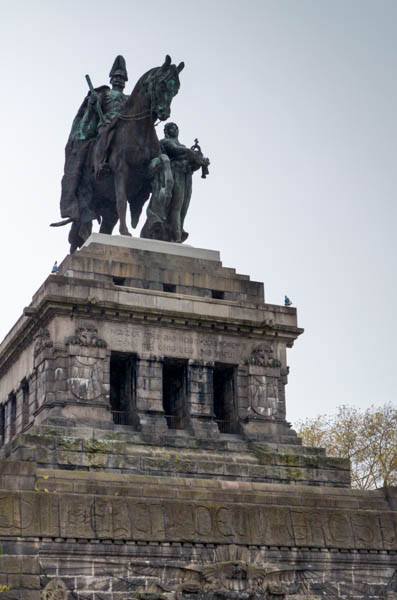 Our first stop was the German Corner located at the confluence of the Mosel and Rhein rivers. Wilhelm II, who revered his grandfather's militaristic approach to rule, had erected a statue of Wilhelm I, the first German "Kaiser" or emperor.

Allied artillery destroyed the statue in WWII. The plinth remained as a memorial. In the late 20th century a private donor replaced the statue amid much controversy. Many local folks don't identify with the Prussians or their military ethic and preferred the symbolism of the empty plinth. Today it stands as a monument to German reunification after the fall of the Iron Curtain.

The guide made one comment here that piqued my interest. She implied that the Federal Republic of Germany was structured as a confederation with the states (Länder) retaining a lot of autonomy. She intimated that individual states might choose to withdraw from the confederation. This was a distressing thought in these days of fractured countries. Wikipedia has an extensive discussion of the structure of the Federal Republic. Unfortunately there were only two books in the recommended reading list about Germany. One was described as a "coffee table book" and the other, which I tracked down, was a snarky send-up of all things German. I didn't like it and didn't finish it.

At the time we were visiting, a lawsuit attempted to force an independence referendum in Bavaria, but it was rejected by the court. 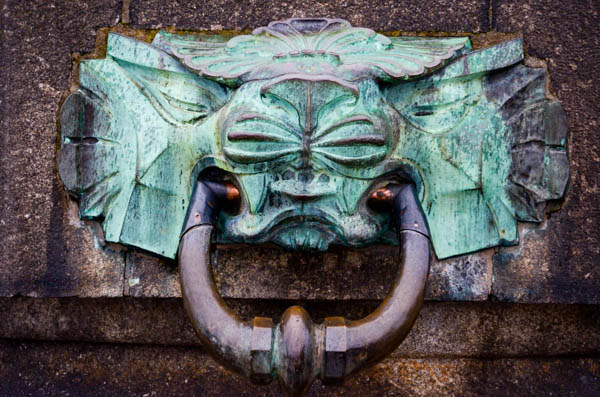 No particular discussion -- I just liked these decorations found on the piers delineating the German Corner.

As we proceeded to the Basilica of St. Castor, we entered the former precincts of the Teutonic Knights. The white building is the only thing that remains of their compound. It is called the Deutschherrenhaus and is now a modern art museum! I no longer recall when it was originally built and the WWW hasn't helped prod my memory.

The Teutonic Order is still in existence today. Check out their Koblenz Facebook page (in English).

My only association with the Teutonic Knights was via the film Alexander Nevsky. It describes their defeat at the "battle of the ice" with the leadership of the heroic Alexander. The score is by Prokofiev and the film is well worth seeing. Caveat: rightly or wrongly the Teutonic Knights do not come off well in this propaganda film. 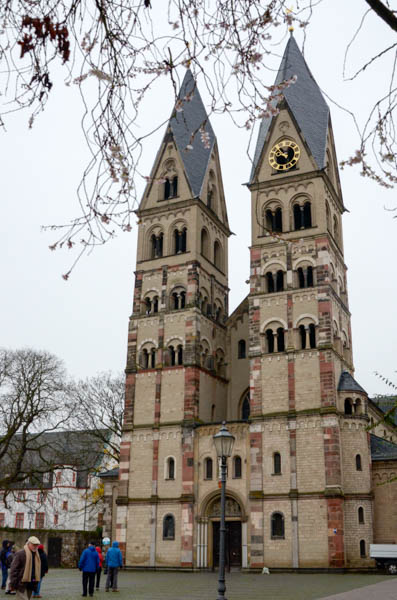 The Basilica of St. Castor is adjacent. I've learned in recent years that "basilica," an architectural form, can also be a designation of a church independent of its construction. This church is a basilica in both ways: its designation and its structure. It was first built in the 9th century and reconstructed in the 12th century in the Romanesque style.

St. Castor is said to have founded a religious community in the Mosel valley in the 5th century. 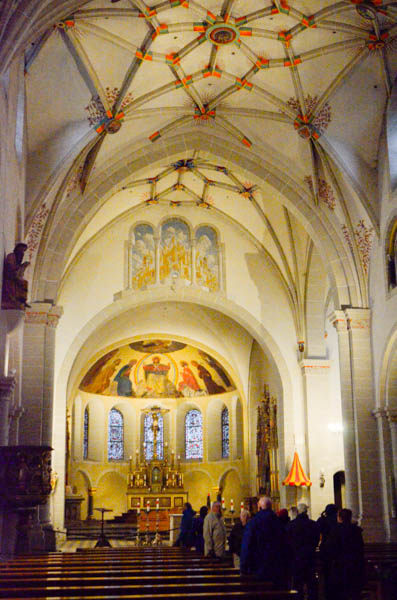 The interior of the church was airy and bright. 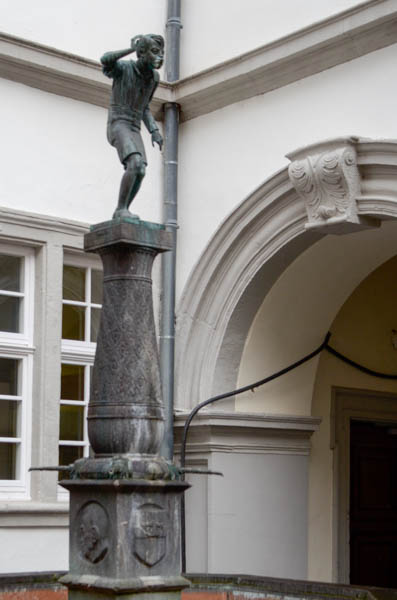 The Schängel Fountain is a whimsical comment on Koblenz. In the late 18th and early 19th centuries, the city was occupied by French forces. Fraternization between the occupying troops and the young women of the town resulted in quite a few illegitimate mixed-nationality children. These children were looked down on and called Schängel, a corruption of the French name Jean.

Over time even the respectable locals adopted the designation and it became the nickname of citizens of Koblenz.

Since it was almost winter, the fountain was not in operation, which was a good thing for us because it randomly "spits" at unwary passersby. 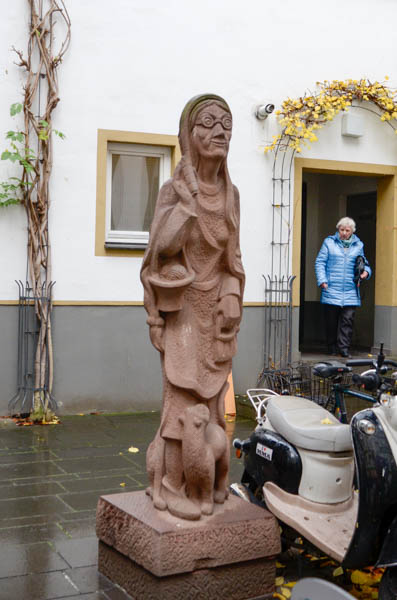 Koblenz has a collection of memorials to local "originals." Our guide took us to this one dedicated to Annemarie Stein, nicknamed Pfefferminzje (Peppermint). She made the rounds of the bars at night in search of schnapps and cigars. One year, which had been quite successful in terms of those refreshments, she visited the parish church and made a prayer of thanksgiving to baby Jesus. The parish priest, overhearing the prayer, responded as if he were baby Jesus: "Why do you drink schnapps instead of water, which is better for you?" Peppermint became incensed and demanded: "How do you know, poopy-drawers, what is best for an old woman like me!"

Well that's what our guide told us and I found the same story on a German website, so it must be true! 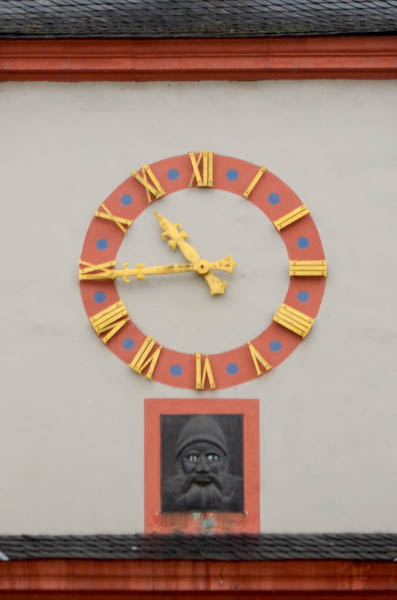 St. Florin's Market Square used to be the business center of Koblenz and this building, constructed in the 15th century, was the town hall. The square was the center of executions and in the 16th century a man accused of robbery was tried and executed there. He remained defiant until the end, and according to legend, rolled his eyes and stuck out his tongue even after his head was cut off.

To commemorate him, the metal face underneath the clock rolls its eyes like a pendulum, and when the clock strikes on the hour and half-hour, sticks out its tongue. Unfortunately we weren't there to see the strike. 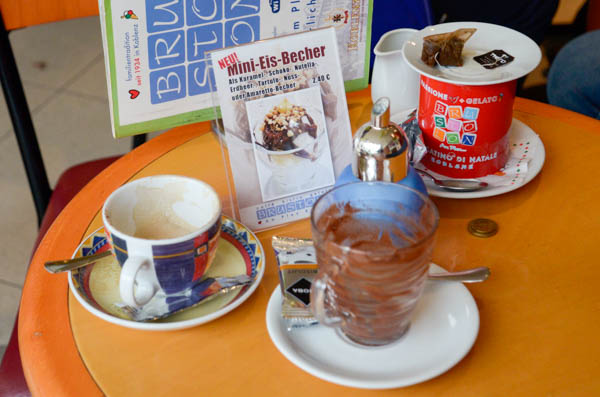 After our tour we had about an hour of free time before returning to the ship. Most people fanned out shopping, but a few wise souls headed to a nearby cafe to dry off and warm up.

I wish I knew more languages, but I've never regretted knowing German. Yes, most people do speak English and signs and menus are often in English, but when I saw the entry, in German only, for "extra thick" chocolate, I was all over it.

Oh. My. Goodness. Was it yummy! It had to be eaten with a spoon. My companions Cary and Karen (from Biloxi, Mississippi!) enjoyed their coffee and tea, but I think I had them beat.

I don't recall that anyone chose the specialty of the shop: ice cream! Brrr.

After our break we hopped on buses to catch up to our ship for the Rhein cruise.