Across Europe in Luxury
Cologne

Cologne is one of the two cities we visited that I had visited before -- back in 1968 when I was studying in Germany. I can't say that I remember much from that time -- just the overwhelming size of the cathedral.

At this first stop in Germany we were introduced to the distinction locals made between themselves and "the Germans," i.e., the Prussians. The Rheinlanders think of themselves as easy-going (and perhaps not especially reliable) -- the antithesis of the uptight and dogmatic German stereotype. The early inhabitants of the area were Franks and we were to travel through Franconia for most of our visit in Germany. (The Wikipedia discussions of the Franks and Franconia don't exactly line up.)

During the morning we had a lecture on the history of the Netherlands. It included a delightful video explanation (opens in new tab) on why it is properly called "the Netherlands" rather than "Holland," which is the name of only two of the states within the country. It gets more confusing because the people (and the language) are called "Dutch" rather than Netherlanders.

My favorite snippet in the lecture was the final war between the English and the Dutch in the 18th century. Both were naval super-powers. The Dutch Navy successfully sank many English ships -- all of which were insured by Dutch financiers. Oops! It may have been a naval victory but it was a financial disaster and the beginning of the end of the Dutch "golden age." 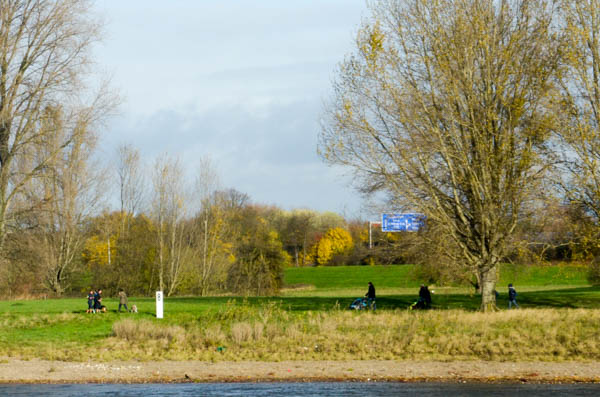 Before and after the lecture we had ample opportunity to watch the folks out for a Sunday stroll on the riverbank. The runners to the left of the picture matched our pace for quite a while as our upstream progress was stately against the current. 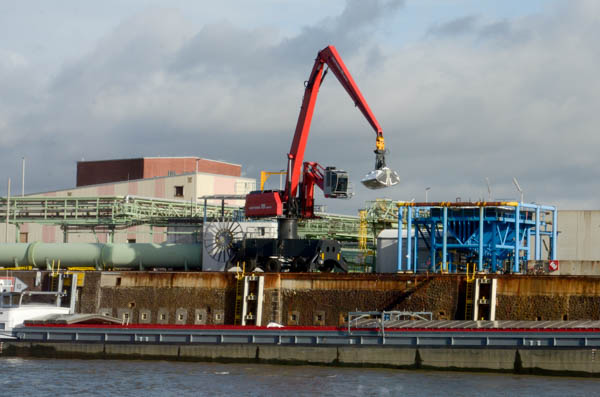 As we neared Cologne we passed several enormous chemical plants, including this one owned by Bayer. The crane scooped up some kind of white powder from the cargo ship and unloaded it into a holding tank. It may now be on your pharmacy shelf as aspirin.

Cologne, a center of the German chemical industry, was almost completely destroyed during WWII. Since that time notable historic buildings have been reconstructed, but the primary focus was getting the city back up & running again, so there is a lot of variety. 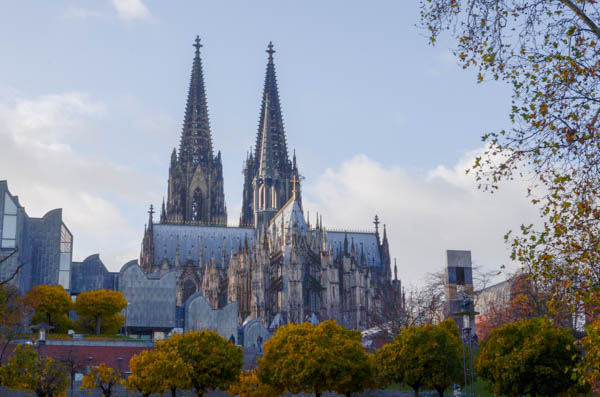 As I noted above, my primary memory of Cologne was the enormous cathedral. I was frustrated at the time by not being able to get a picture of it. I bought a postcard. Well, it's still enormous and I still couldn't get a full-frontal image, but this is the river-facing view. The cathedral was begun in the 13th century, but not completed until 1880.

The oddly shaped roofs between here and there belong to the Ludwig Museum of modern art. 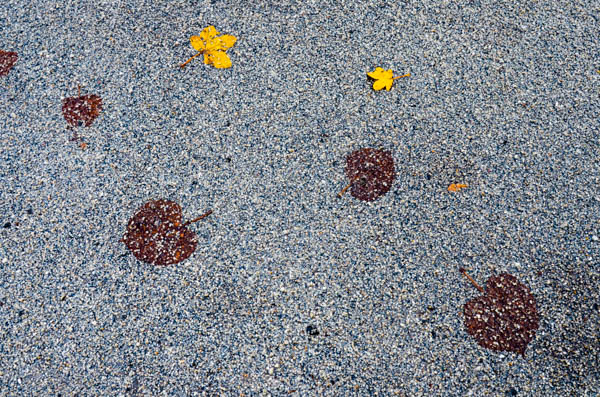 No explanation, just a nice pattern of leaves on the pavement. 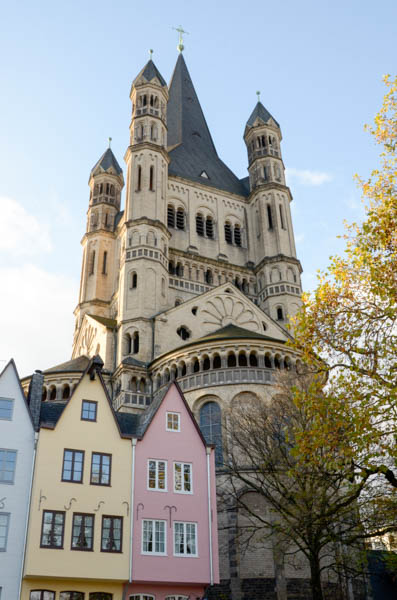 Great St. Martin was part of a Benedictine abbey that may (or may not) date from the 8th century. Less contested sources date the founding of the church to the 10th century. Construction on the building itself began in the 12th century. At the time of its initial construction, the site was an island in the river. Fires and other calamities, most recently Allied bombing in WWII, necessitated rebuilding several times.

Rebuilding after WWII was controversial, but it is now fully restored and an active parish church. The first service in the reconstructed church was in 1985. 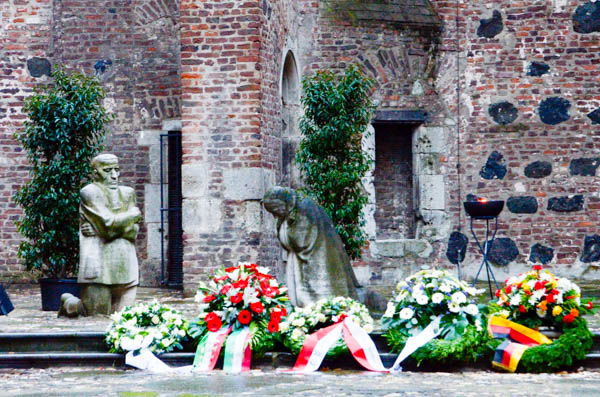 St. Albans Church was also destroyed by WWII bombing and townspeople decided not to rebuild it. The ruins stand as a memorial. German artist Käthe Kollwitz created the sculpture, called "Grieving Parents." 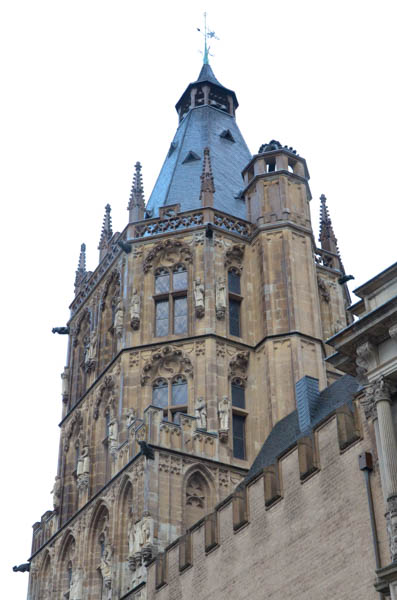 The Cologne City Hall complex dates in part from the 14th century. The city's guilds erected the tower as a symbol of their victory over the nobility. Like most of the old city it had to be rebuilt after WWII.

We received quite a presentation on the guilds by our city guide, but I confess that I no longer remember the details. I do remember the legend of the brave 13th century Mayor, Herman Gryn. The minions of the ruling Archbishop plotted to feed him to a caged lion, but the mayor killed the lion and executed the Archbishop's functionaries instead. The legend is a metaphor of the struggle between civil and ecclesiastical government. A relief of the heroic mayor and the lion is part of the entryway to the town hall. 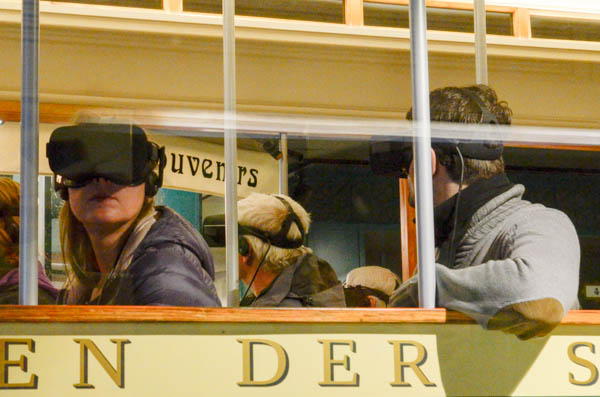 At one point we passed this virtual reality concession. It was eerie to watch the participants lollygagging at, from our perspective, nothing in particular. Based on online reviews it is really a great experience. See more at the link. 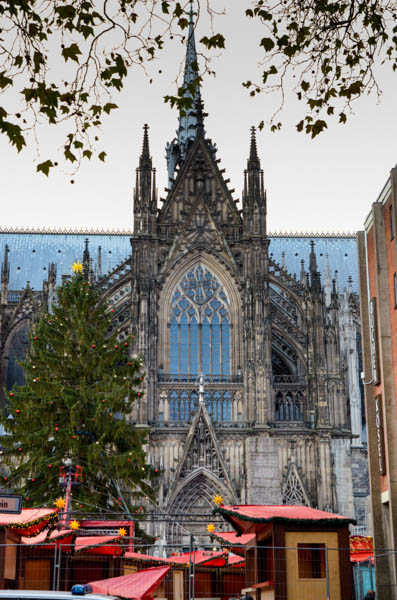 The transept of the cathedral overlooking a nascent Christmas market.

Also in this area is the Romano-Germanic Museum. This would have been our choice for the free time exploration had it been open late enough. We looked in the windows and saw some impressive mosaics. Were we ever to return to Cologne, this would be our first stop. 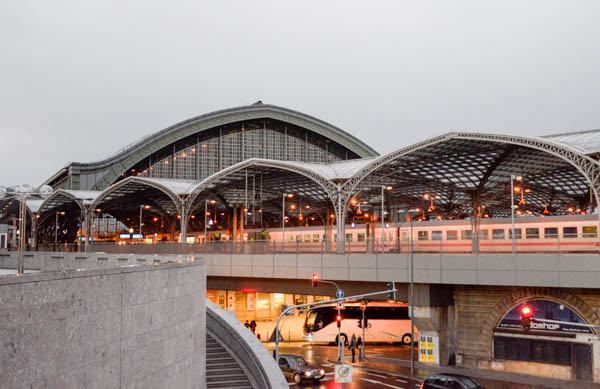 As we walked back to the ship after our tour and free time, we passed the railway station. I found the building and train sheds quite beautiful.

This statue of Emperor Friederich III is one of four that were part of the Hohenzollern bridge across the Rhein. Friederich had liberal ideas and education and hoped to bring Germany together in a progressive alliance. Unfortunately by the time his father died, Friederich was already suffering from cancer of the larynx and died only 99 days after assuming the throne.

His son and heir, Wilhelm II, was conservative and militaristic and is "credited" with starting WWI. It's tempting to wonder what if...