Across Europe in Luxury
Amsterdam Tour

Our first tour was a cruise through some of Amsterdam's many canals followed by a guided visit to the Rijksmuseum. 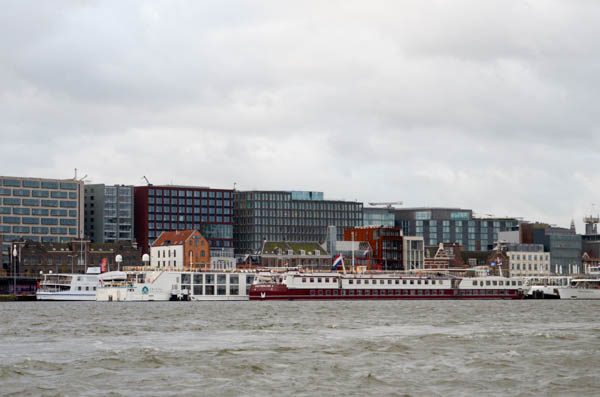 The cruise dock is within walking distance of Amsterdam. On most of our sea cruises, the cruise dock has been tightly secured, sometimes with no way to get away from the dock area. On this trip, however, the cities and towns were usually accessible from the docks. There was a security check to get onto the ship and often there were local police or security personnel nearby.

We played tag for at least part of our journey with a couple of the five or so boats that were also docked here.

As a foretaste of what was to come we were met by buses at the cruise dock and taken on a ten minute drive to an adjacent dock where we loaded onto the canal tour boat. It would have been quicker to walk as the walkway was direct and the road trip entailed at least two left turns. 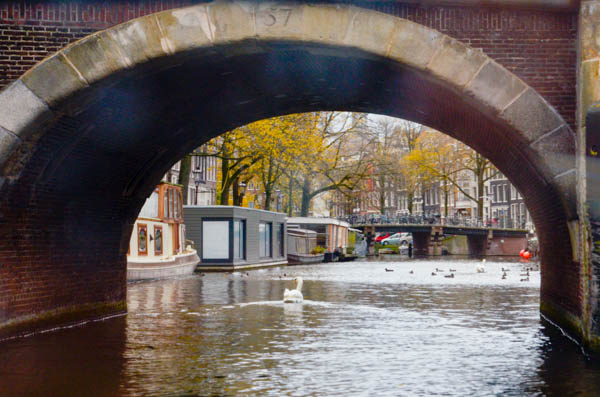 The canals were originally created beginning in the 17th century for water control. Much of the Netherlands and all of Amsterdam is below sea level so drainage is a significant concern.

After the damage of WWII many people moved into houseboats along the canals while their homes were repaired or rebuilt. The city extended services such as electricity to the houseboats and many became permanently occupied. During the "hippie invasion" of the 1960s & 70s the houseboats became so popular that they had to be banned from the main canals, but they still can be found in certain neighborhoods.

Some of them were quite elaborate with decks and gardens. Many can be rented like hotel rooms. Others looked derelict -- even to the point of being half-submerged.

One of the places we had hoped to visit during our free time in Amsterdam was the Anne Frank House. We were dismayed to learn that tickets must be purchased well in advance for this popular attraction. It has to go on the "next time" list.

We were glad to at least see the house during our canal cruise. The "secret annex" where Anne and her family lived for two years before being betrayed faces onto a back courtyard and isn't visible from the street. 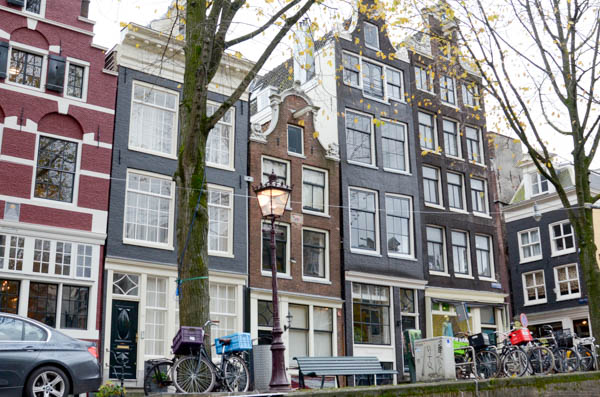 There is quite a variety of building sizes and shapes in the older parts of Amsterdam. Since the ground is naturally swampy, the heavy brick buildings were constructed on wooden pilings sunk deep into the ground. Even so some of the buildings have settled in odd ways. A little of this can be seen in this image where the brown brick building is slightly out of alignment with its neighbors.

Or guide said that the largest forest in the Netherlands is underneath Amsterdam!

The buildings are characteristically tall, narrow and deep. 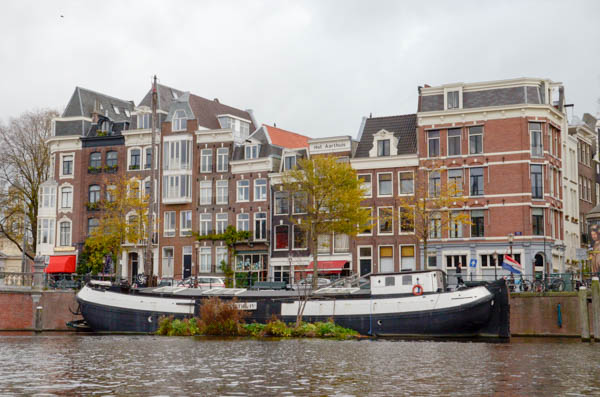 This houseboat residence is in a more modern neighborhood. It has a nice floating garden alongside.

An ingenious drawbridge allows entry into this side canal.

These are the remains of locks that are no longer used in the center of Amsterdam. We were given an outline of why they were no longer used, but I don't remember the details. An overview of water management and flood control in the Netherlands would take up most of a two-week trip on its own. 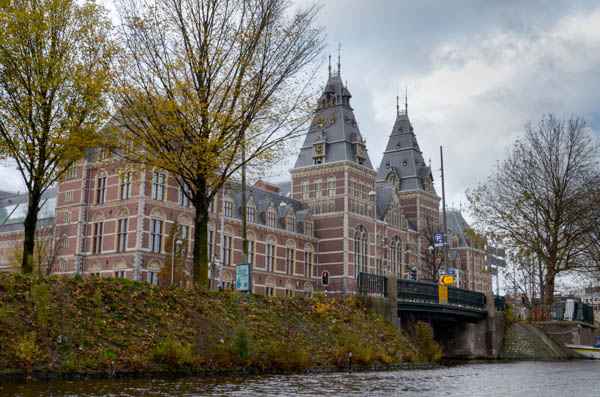 The Rijksmuseum is located on the outermost of the concentric canals that surround the historic Amsterdam city center. It was great fun to arrive in a boat and tie up at the dock rather than in a boring tour bus.

The collection was founded in 1800, but it bounced around for quite a while before it moved into the current building in 1885. The structure has been renovated and enlarged several times since then.

As was the case at some of the other museums, our group, along with some others, entered before the normal opening time. We avoided the crush of the regular visitors. By the time we left the place was packed and there were long lines at the ticket window.

At the museum we divided into small groups of ten for guided tours of the "Golden Age" exhibits of Dutch art.

Our guide for the museum, Paul, was knowledgeable and enthusiastic about his subject, and his presentation has changed the way that I will look at paintings. He not only focused on the composition, but also on the use of various forms of perspective (who knew there was more than one?!?) and the ways that artists use paint texture and color to produce desired effects.

He emphasized the need to get up close and personal with the paintings in order to appreciate the way the artist used his medium to get the desired effects. He admonished us to elbow people out of the way! Otherwise, he said, you might as well look at the paintings in a book.

Leaving the museum we did get on a boring tour bus to return to the ship for our departure, but it was anything but a boring morning.