Across Europe in Luxury
Amsterdam on our own

Neither of us had ever been to Amsterdam before and we were determined to take advantage of the hours between our early morning arrival and the official start of the program in the late afternoon. We not only needed to walk around after several hours on a plane, we wanted to keep awake as long as we could! The cruise dock is within walking distance of the historic city center, so once we checked in to our cabin we headed out. 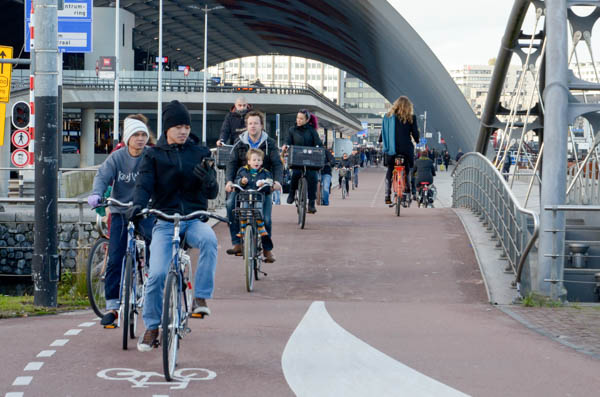 This was our first introduction to bicycles in the center city. Amsterdam is pancake-flat with narrow streets and nowhere to park a car. The bicycle is an obvious choice of transportation and is much faster (and cheaper) than driving.

Bicycle lanes are NOT an afterthought in this city and woe betide the pedestrian or automobile that intrudes on their space! There were even left turn lanes at major intersections to minimize congestion. 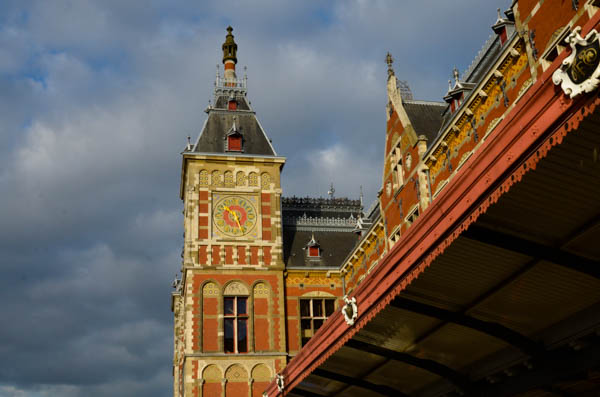 The railway station was a good introduction to the 19th century architecture of the city.

The interior of the station has been much "modernized" since it was built and I couldn't get any good pictures of the remaining original central hall. Besides, the main attraction for us was the ATM to stock up on Euros. 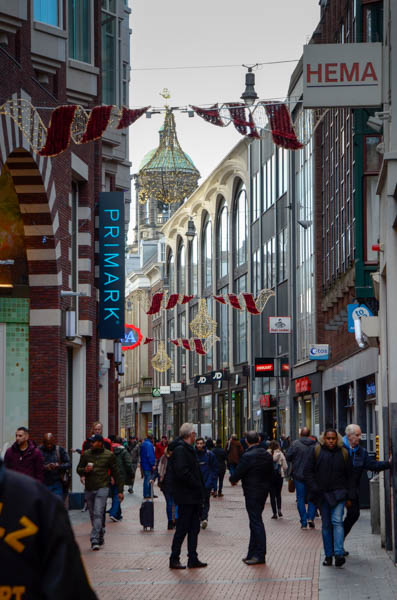 Our goal for the morning was the Begijnhof near the Dam Square, but first we had to get there. The main street, Damrak, was crowded with cars, bicycles & people and infested with T-shirt souvenir shops so we dove down an alleyway to a pedestrian shopping street. It was less crowded, which gives an idea of how crowded the main street was, and infested with high-end shops, but at least they weren't trying to drag you inside.

All of the shopping areas had their Christmas decorations up.

I took a picture of this narrow side alley primarily for the projections at the top of several of the buildings. We learned later that this is a hook or "beak" used to move furniture into the apartments. The constrained space in the city center means that most houses only have spiral staircases in the interior. Try getting your new refrigerator up a spiral staircase!

The solution is to affix a pulley system to the beak and use it to raise the bulky items to a removable window on the appropriate story. Our guide the following day said that the most strenuous part of a move was getting the pulley attached. After that the work was easy. 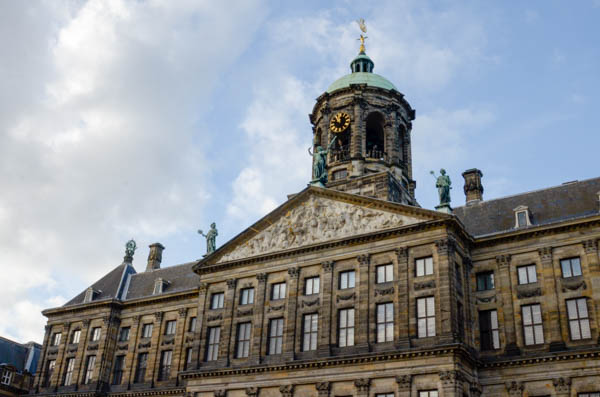 We arrived at the Dam Square just as the hour was striking at the Royal Palace. The bells played a not exactly pitch-perfect tune before the strike. We kept expecting little automata to come spiraling out, but none ever did.

The palace was open for tours, but it wasn't on our agenda. 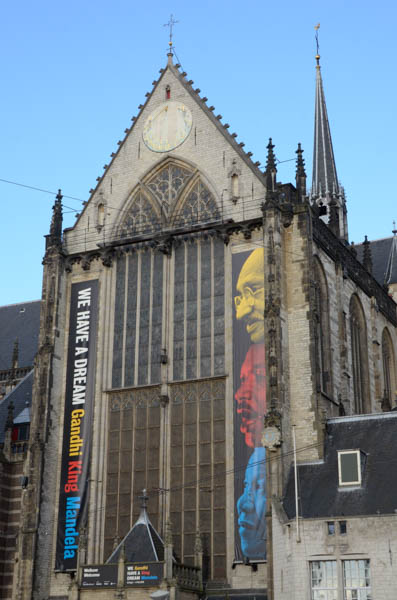 Across the street from this palace is the Nieuwe Kerk, reconstructed in the 17th century after a fire destroyed the 15th century original. It was updated in the 19th century. It is no longer used as a parish church, but serves as an exhibition space. Pictures of the interior may be seen at the link.

The ancient Begjinhof, a remnant of the late Middle Ages (although largely reconstructed), is a peaceful sanctuary in a busy and vibrant tourist zone.

The Beguines were a Catholic lay order of women who lived in chastity although they were free to leave the order to marry if they wished. When the Catholic church was suppressed after the Reformation, this area was preserved because it was privately owned. 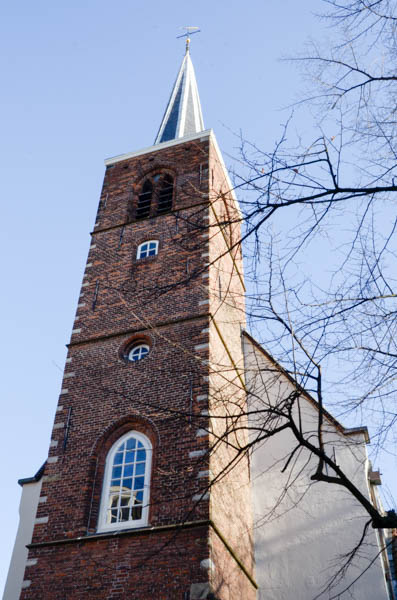 Protestants confiscated the church from the Catholics. It is still in use as the English Church, a Church of Scotland (Presbyterian) congregation. One of the two parishioners greeting visitors was from Lexington, Kentucky!

After their church was desecrated, the Beguines quietly reconfigured two adjacent houses to form a chapel. By design it still looked like a pair of residences to prevent harassment by the authorities. 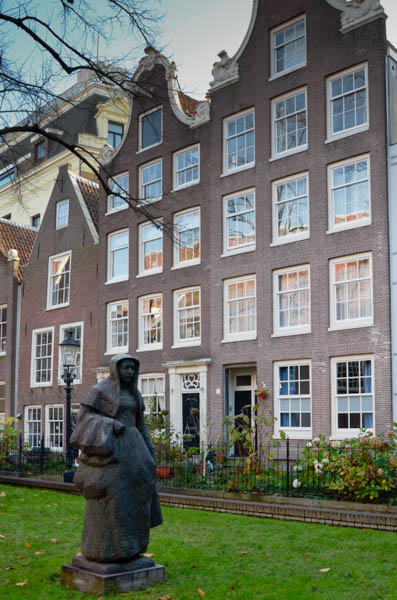 A memorial to the former occupants.

The complex is still occupied by single women although they are not part of any organization. Apartments seldom come available because of the convenient and quiet location. 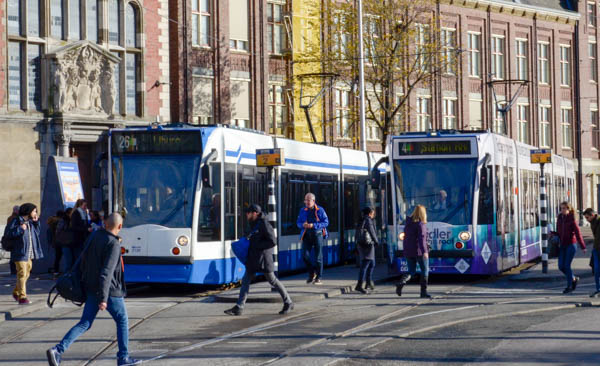 After visiting the Begijnhof we hopped a tram back to Amsterdam Centraal. Our guide had recommended that we take every opportunity to eat "on the economy," but we were slowing down and thought a quick meal on the ship followed by unpacking was a splendid way to spend the afternoon. 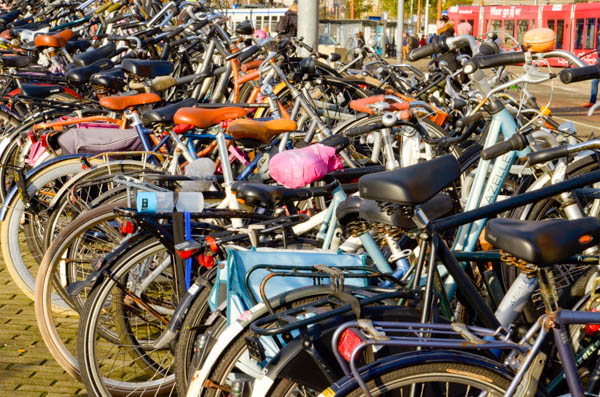 "Long-term parking" at the train station! This is a small segment of the bike parking lot adjacent to the Amsterdam Centraal railway station. There were machines of every size and configuration.