We headed back down the valley the following morning on our way to Crater Lake. Again there were worries about whether fires would result in closed roads, but we had no problems. There were also worries about whether smoke would prevent our being able to see anything at the lake, but again we were lucky. It was hazy, but visibility was adequate.

Crater Lake was formed in the aftermath of a massive eruption of what is now called Mt. Mazama. The eruption happened almost 8000 years ago. 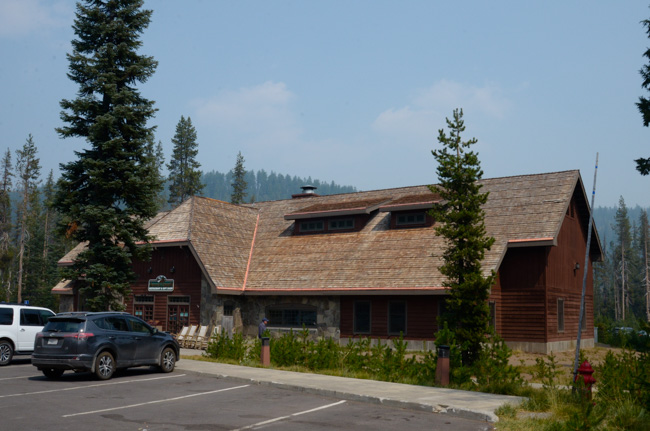 We had lunch at Annie Creek restaurant at Mazama Village. Lynn had earlier told us a sad story about the water conflicts between the Native peoples of the coast and the inland farmers. Water rights generally are volatile and the subject of intense negotiation. In this case the agricultural interests had installed incorrectly configured irrigation pumps on the Klamath River that killed salmon fry. This was only noticed years later when the number of fish returning to spawn was dramatically lower. The population crash on the Klamath affected salmon allocations throughout the northwest. The pumps have been reconfigured, but before the stocks could recover, drought conditions in the area have complicated the problem. The fishery continues in danger.

What with one thing and another, Crater Lake Park has lost the right to draw water from Annie Creek and must truck in water. 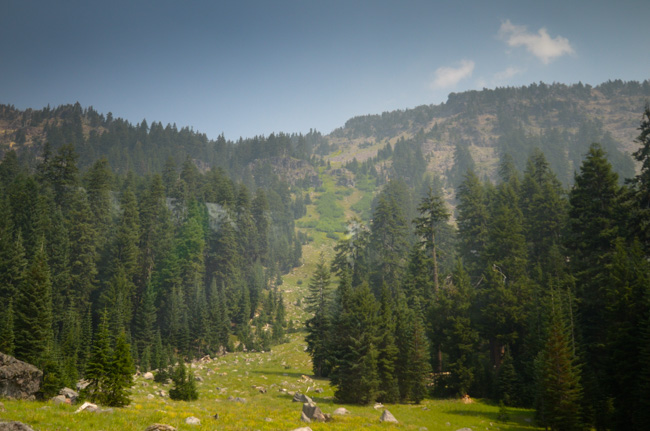 After lunch we started up to the rim around the lake. This is the only picture I could get of the outside of the rim. The haze is due to the ongoing fires. 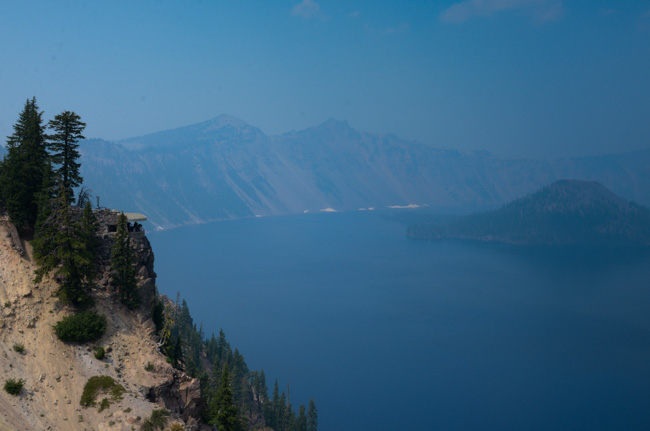 A view over the lake from the vicinity of the Crater Lake Lodge. Yes, it is hazy, but at least we can see the lake. The white along the lake shore is snow still remaining from the extraordinary snowfall of the past winter.

The first time Jim and I visited Crater Lake was in the winter of 1987. It was completely socked in and we couldn't see much beyond the parking lot! The second time we were there, it was beautiful with snow on the rim, but I haven't been able to find my pictures from that visit.

There is an overlook and interpretive center on the ridge to the left. You can just see the projecting roof (it was designed to blend in).

The lodge had never been open when we visited before. It would be fun to come stay for a few days. 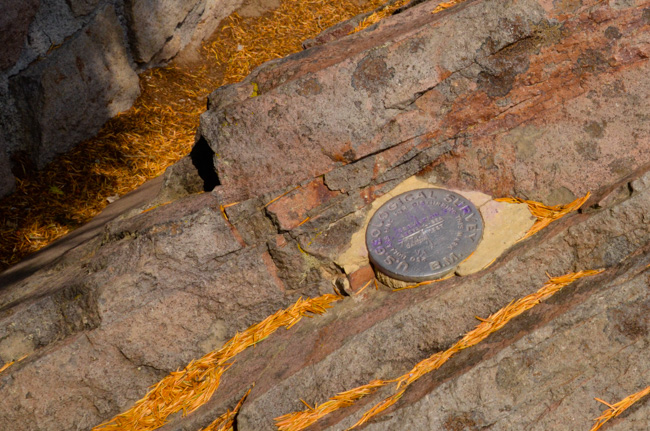 Jim knew that there was a USGS benchmark at Crater Lake. We asked at the lodge and they told us where to find it after a short walk around the rim.

The National Geodetic Survey (NGS) places most benchmarks. I was unable to find much info on USGS benchmarks, but this one is known to NGS as NZ0013. 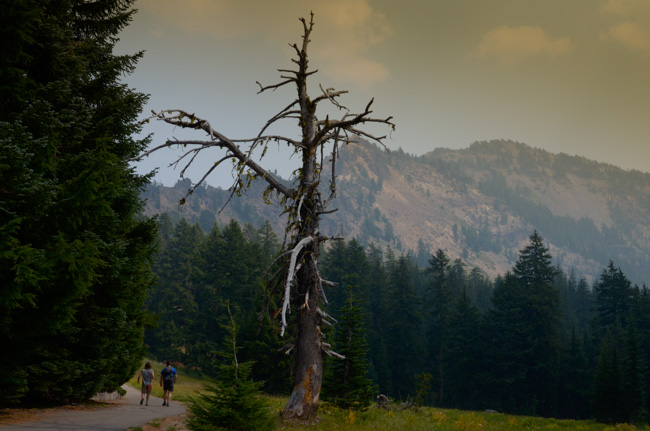 Also on our walk along the rim we saw this dead whitebark pine. There is an invasive fungus that has been killing the trees and now they have been attacked by pine beetles. The loss of the trees is bad enough, but there is also a bird, the Clark's nutcracker, that is associated with them. The trees need the bird to spread their seeds and pine seeds are an important source of food for the birds. 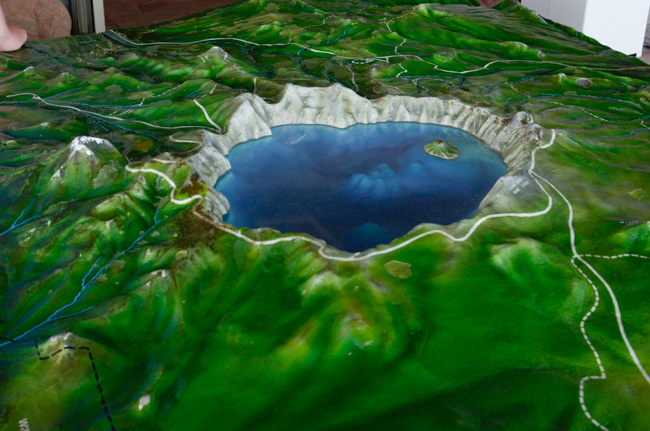 The overlook mentioned above had this wonderful model of the lake and its surroundings. We are currently located more-or-less on the far side of the lake from this view. We'll be taking the west rim road (to the right) about a third of the way around and then backtrack to go out the road coming toward us.

I particularly like the view of the lake bottom shown in this model. The lake is the deepest in the US and 3rd deepest in average depth in the world. This is amazing considering the areas easily seen here that don't appear all that deep! 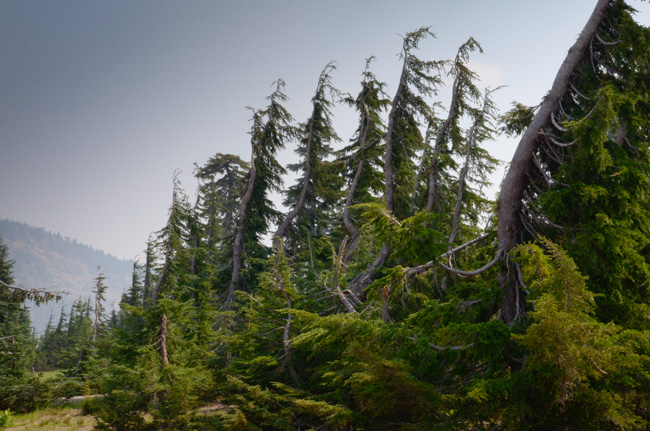 When I first saw these trees with a bare side I figured it was due to persistent strong winds. But then I noticed that the bare sides were the sides facing the road regardless of their N-S-E-W orientation.

My best guess is that this has something to do with road maintenance, perhaps the use of salting or other snow removal techniques during the winter. This effect has been documented in other locations.

There are no utility lines that might have prompted manual tree trimming.

I wouldn't expect the National Park Service to be a heavy user of road salt, however. It's a mystery.

We saw golden-mantled ground squirrels at many locations here at Crater Lake and later at Lava Lands. They were bold, fast-moving little critters. 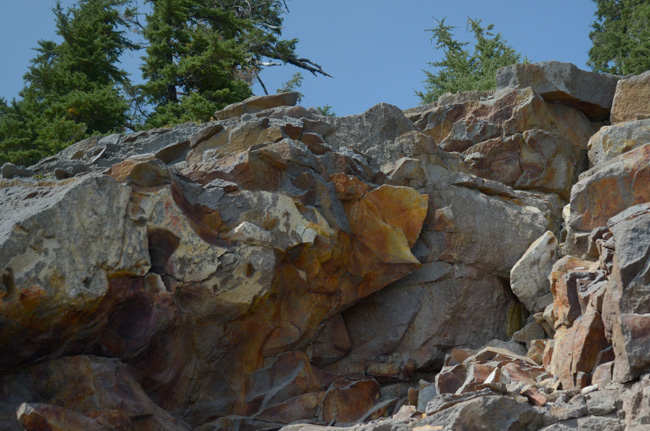 Carol had explained to us the various kinds of rocks that we would be seeing on our travels. Many of those are volcanic in origin since the Cascades are volcanic. Crater Lake is certainly volcanic!

These rocks along the road are rhyolite, which is a kind of rock that can be formed when magma oozes out of the volcano rather than erupting explosively. Rhyolite can be quite colorful as this is. It can also contain gemstones such as topaz or opals. 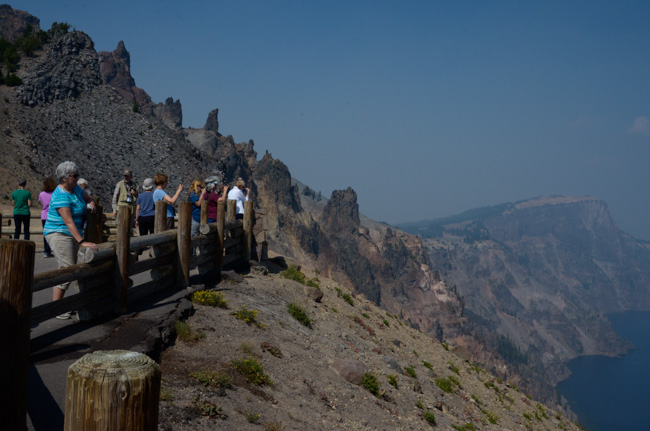 This overlook had some geologic interest in addition to the scenic value.

The dark craggy rocks behind our spectators are called the Devil's Backbone. It is a dike: molten lava that forced its way up through cracks. The surrounding rocks have eroded away leaving the hard basalt.

The promontory in the distance is Llao Rock. According to what I can find online, it predates the Mount Mazama eruption. The name comes from the Klamath Indian god of the underworld. There is a myth that explains the origin of the lake as a battle between the god of the underworld and the spirit of the sky.

Wizard Island is the cinder cone that arose after the eruption of Mount Mazama. There are some stunning pictures at the link.

There are boat trips to the island and it is possible to disembark and spend some time there, but not overnight. Ah, to be younger.... 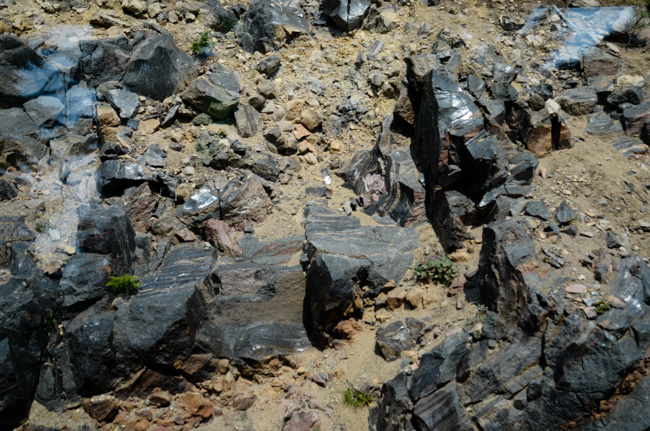 Another type of volcanic rock is obsidian. I had asked Carol if we would see any and she pointed out this outcrop that we passed later in the drive around the rim.

I used to have a chunk of obsidian from Mexico, but I don't know what has happened to it.

This view of the lake is north of Llao Rock. The mountain barely visible on the far side of the crater rim to the center-left of the image is Mt. Scott, the highest point in Crater Lake Park. It is older than Mt. Mazama and was far enough away to survive that explosion. 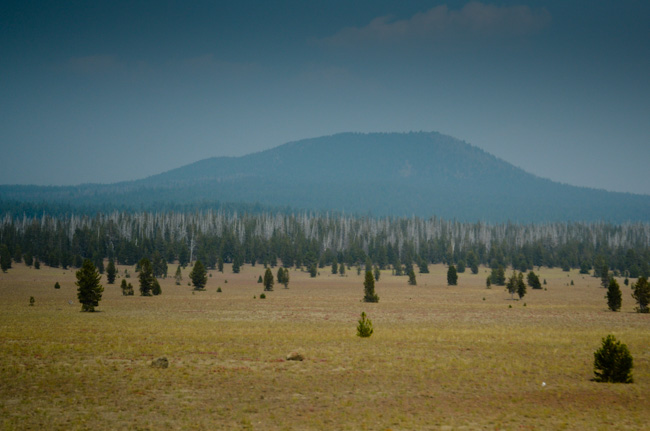 The above picture was from our farthest point around the rim. We turned back toward our next overnight stop.

On the way we would cross the pumice desert. The eruption of Mt. Mazama covered this area in sterile pumice and it has only recently begun to support small trees after almost 8000 years!

I know that Carol told us about the dead trees in the stand beyond the "desert," but I can't remember the specifics. Perhaps they are also victims of the pine-bark beetle. 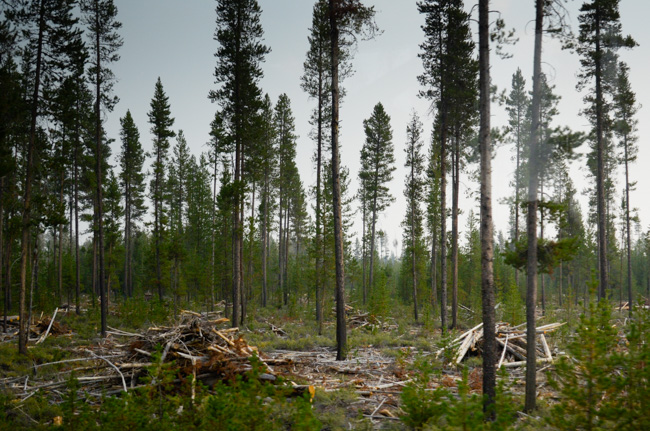 Having seen the stands of dead trees and having had to thread our way through forest fires, forest management was on my mind. As we passed this stand with heaps of dead trees piled up, Lynn explained that there were a variety of experiments underway to determine how to best manage the forests.

At one time preventing fires at all costs was the goal. Nowadays foresters understand that fire is an essential factor in healthy forests, but devastating fires are still a problem. In this forest the dead trees have been collected into heaps that will be removed to prevent a truly destructive conflagration.

That evening we spent our last night "on the road" in La Pine, Oregon. It is a small town without a large restaurant, so Lynn and Carol had ordered pizzas for a festive gathering. What a treat!